A few Noob questions with pics

So, my plant is about three, three and a half weeks into flower, and I have a few worries:

1, The plant has virtually no smell. Unless I stick my nose right up in there, I can't smell anything but regular green plant smell. The plant smells GREAT when I do stick my nose right up in there, though, but from what I've heard from other people, the plant should start stinking up the place shortly after flowers start showing up. As it is now, I don't need any odor prevention.. Could it be a hermie? See photo, and see if you can tell.

2, The plant is very, very dense. I'm worried that it's too dense, and that it'll cause bud-mold later on in flower. If it is too dense, what can I do about it? I've already trimmed a lot, but not sure how much of that I should be doing while the plant is in flower. If it had been just leaves I had to trim, then I wouldn't have worried, but there's entire branches which are intertwined and hardly receiving any light or air. Can I chop these (smaller) branches off without permanently damaging the plant? See pics to get a better idea. 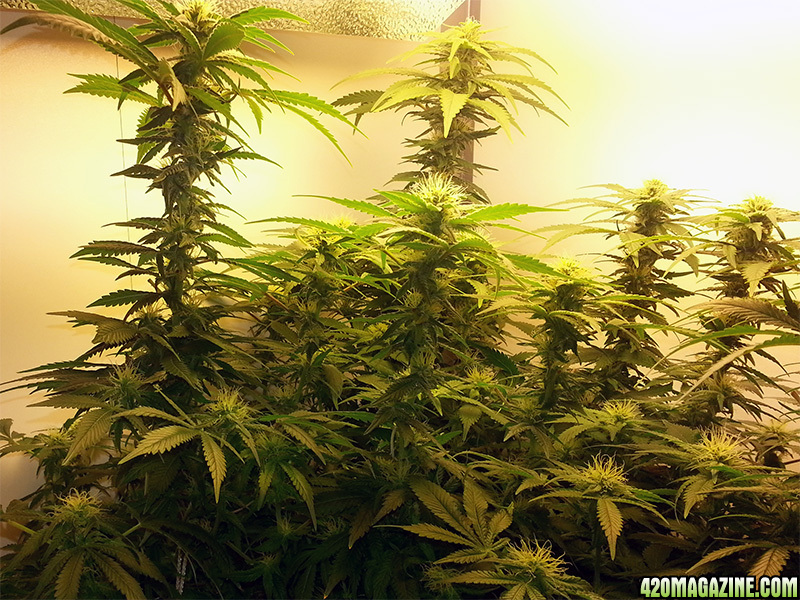 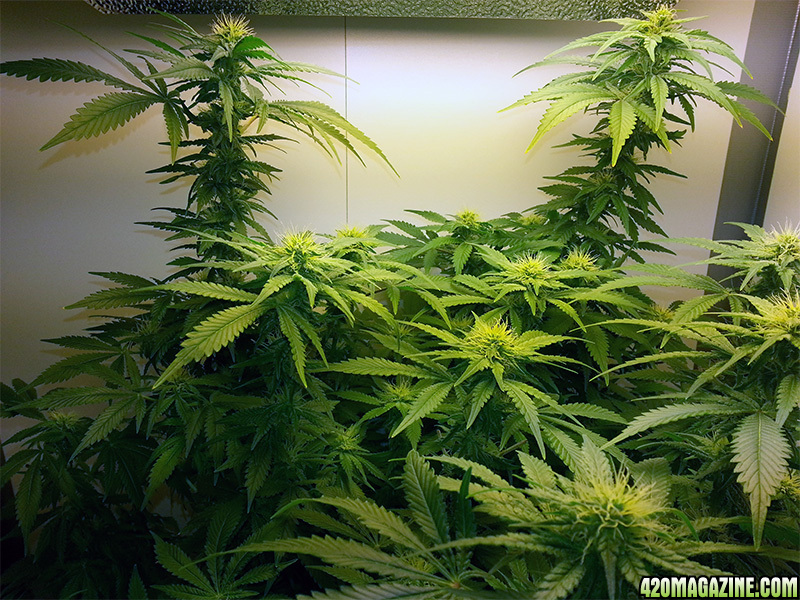 Thanks for taking the time to have a look.

MaoZeBong
In total disregard of the Lore.

I don't see any signs of a hermie.

She will start to smell soon enough

Do you have any active ventillation? An oscilating fan for example?

How is your humidity in the grow space?

Don't worry about the buds being dense. That's what we want! Dense buds

Mold would only become a threat if the air in your growspace is stagnant and humid.
420 Magazine®
Creating Cannabis Awareness Since 1993

Arite! That is comforting to hear. And thanks for the compliment.

And I think I explained wrong. (Appologies, English is not my first language.) It's the plant (branches, leaves and buds) which are densely packed together. So much so that the lower (smaller) branches hardly gets any light, and are a pale green as a result..

Can I cut these small, low branches off, or will the plant take damage from it? They are all small and won't produce hardly anything, and only serves the purpose of making the air stale and stagnant. :/

Thanks a bunch for your input and feedback.
In total disregard of the Lore.

Your english is good

my reading is bad

Usually it's fine to trim off lower leaves and budsites, but I would be careful about cutting branches off.

Can you get a clear photo of what you mean?

I can get photos. Hopefully they're at least as clear as mud(d). 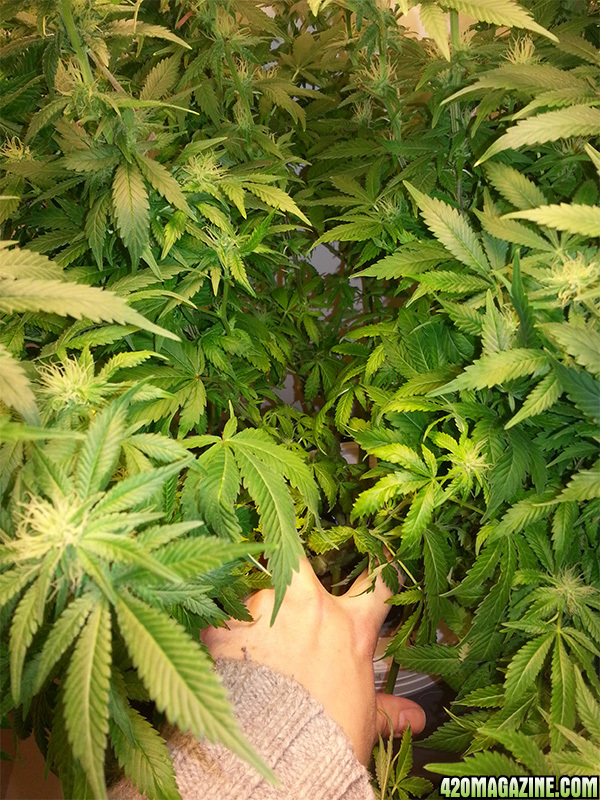 Here, I'm separating a couple of the colas to peer down through the middle. You can see the pale color of the leaves and proto-buds. 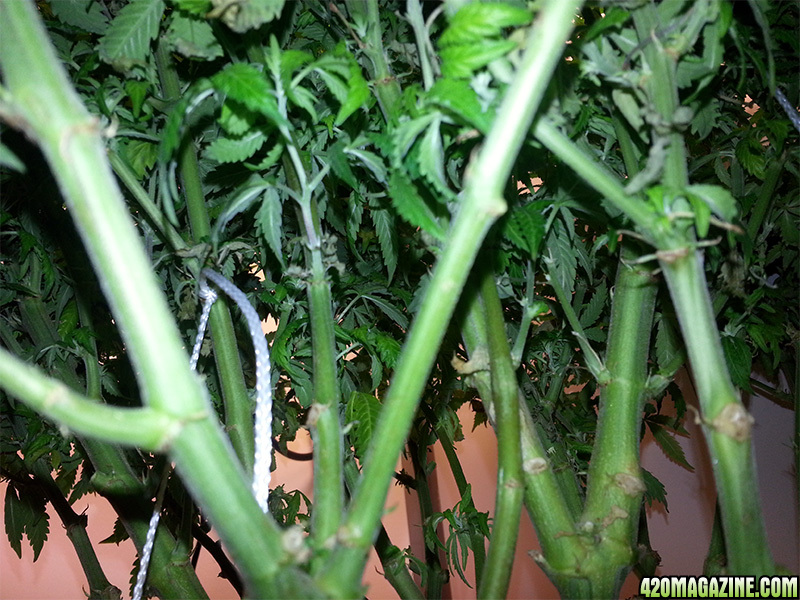 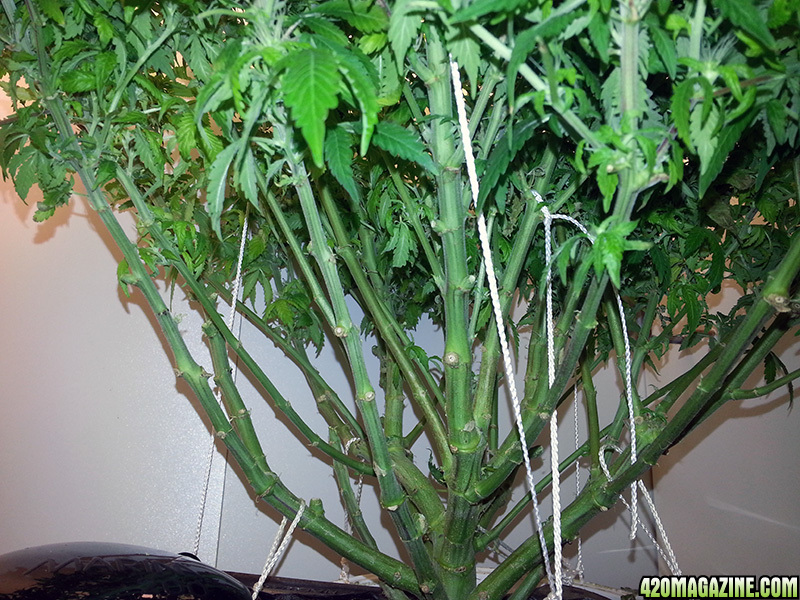 These two are shot bottom-up, and it's painfully obvious that I've not trained this puppy well..

No light can be seen from below, and there's tons of these spindly, thin branches with only a slight tuft of bud on them.

EDIT: You can see I've trimmed the lower third pretty brutally, but that was during veg. Obviously, I didn't trim enough...
In total disregard of the Lore.

Maximise airflow and light penetration. Just be gentle and thoughtful.

Check out defoliation techniques. It would be perfect for you. Basically, you just cut off most of your fan leaves. They're used for growth in veg. Once I hit three weeks, I cut off almost all my fan leaves to give the lower bud sites maximum light. Here:

Increasing yield with defoliation indoors - What's it mean? How to do it?
M

Brilliant, both of you. Just the answers I was looking for. Thanks, and thanks again.
In total disregard of the Lore.

and it will get more smell when it gets more ripe. the raw unripe buds you cut can be eaten or composted.
The more you grow the more you know and knowing is half the battle GO JOE'S!!

Thanks yuyo. I'm using the giant 250W ones, it's not 250W of small ones rigged together. I think these ones have a bit more oomph. Thanks again for the compliment.


The303Stoner said:
looks like you got the info you needed

and it will get more smell when it gets more ripe. the raw unripe buds you cut can be eaten or composted.
Click to expand...

Wow. Did not know that. Too bad I saw your post about 5 hours too late.

I'll have to try that on the next one. Are they tasty? I don't expect them to have any potency at that point, or am I wrong?
In total disregard of the Lore.
M

It's done, and looking a whole lot better. The lower foliage have been reunited with their long lost friend The Light (or Mr. Light as it prefers to be known.)

Got myself a fan as well, couldn't afford an oscillating one, but I'm guessing that a regular one is better than nothing.

Okay. Some before and after pics. 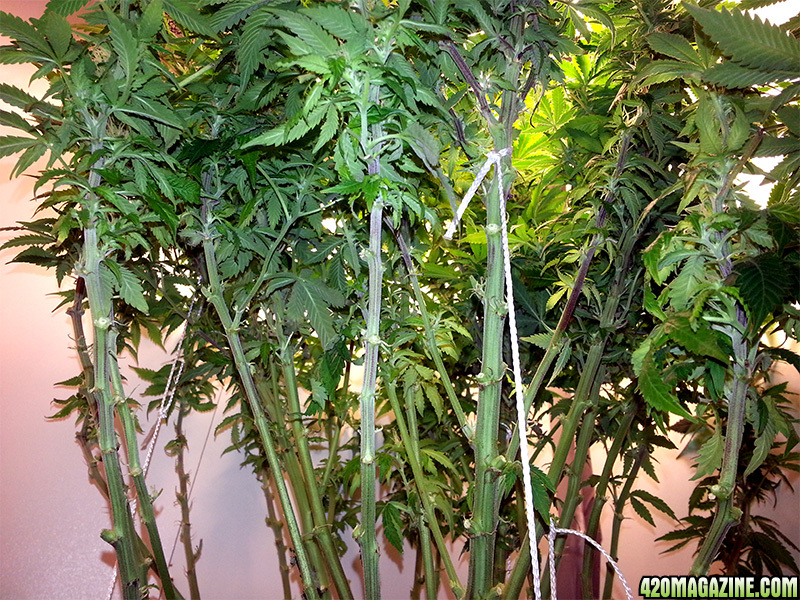 I promise I had some better ones, but while masking their watermark in Photoshop, I accidentally saved over them... Being on this site, I'm sure you'll understand the reason why. :tokin:


Thanks for reading, and thanks for all the support and kind words. Cya round, guys.
In total disregard of the Lore.

And A non-oscillating fan is fine

The Photo uploader from

strips all the data from your photos. Why do you have a watermark?
420 Magazine®
Creating Cannabis Awareness Since 1993


MaoZebong said:
Are they tasty? I don't expect them to have any potency at that point, or am I wrong?
Click to expand...

They are straight medicine and superfood when they're eaten raw.

They're good in a salad. They won't get you high, but, yes, they are tasty. If you want to activate the THC, you could also just make budder or canna/coconut oil.