A Look At The Evolution Of Marijuana Purity Testing

Is commercially grown cannabis being tested for harmful contaminants or are there unexpected health risks associated with sparking some Colorado green?

It turns out it's still optional to test Colorado's medical marijuana for harmful substances, but that is set to change next year. Depending on their condition, medical marijuana consumers are more likely to have a reduced immune system, making them even more sensitive to contaminants.

On Sept. 16, Colorado Senate Bill 15-260, addressing medical marijuana product testing, was signed into law. The bill will require that medical marijuana and medical marijuana-infused products be tested for potency and purity. To achieve that end, testing facilities will be certified specifically for medicinal cannabis.

Tommy Moore, communications specialist for the Department of Revenue's Marijuana Enforcement And Taxation Division, said mandatory testing for medical cannabis will begin on July 1, 2016, but noted that licensed medical marijuana businesses have always had the option to voluntarily test.

The lag time for mandatory testing is dependent upon the creation of a marijuana laboratory testing reference library.

Required testing of recreational marijuana has recently been expanded to include microbial contaminants. Mold and mildew are common problems in cannabis gardens as the environment is ideal for fungus and bacteria to flourish. Luckily, hazardous fungal contaminants like rhizopus and scopulariopsis can be detected in testing, along with other dangers like botrytis and powdery mildew.

Beta testing for microbial elements began on Sept. 23 but is not fully mandated until sufficient testing facilities become state certified to perform the expanded testing, according to a DOR bulletin. While only one retail marijuana testing facility has been provisionally certified, the Marijuana Enforcement Division is coordinating its efforts with the Colorado Department of Public Health and anticipates sanctioning five additional testing facilities in the coming weeks.

Andrew Benton, manager at Native Roots Frisco, said his store is prepared to meet new requirements as they go into effect.

"People don't want to jump the gun," he said. "We want to stay compliant."

Bill Livermore, Cannlabs director of external communications, said they test over 50 percent of the legally produced cannabis in Colorado.

"We are poised to meet any requirements," he said. "We have the science, the equipment, the technicians and all of the (necessary) data."

Colorado House Bill 13-1317, which Governor Hickenlooper signed in May 2013, instructs the Marijuana Enforcement Division to "establish a marijuana and marijuana products independent testing and certification program, within an implementation time frame established by the department."

"Since the passing of that legislation, the continued development of our testing program has resulted in the full implementation of potency testing, homogeneity testing and residual solvents testing," Moore explained.

With microbial testing being phased in, the next unaddressed areas of testing are pesticide levels.

"There is not a time line right now with respect to MED being able to test for pesticides," he said. "What MED does have are rules that require our licensees to be compliant with the Pesticide Applicators' Act."

"We have the ability to test for 170 (different) pesticides," he said.

"The MED, along with the Department of Agriculture and other state departments are working very hard on this issue to come up with a process that our licensees can be compliant with," Moore said.

Since cannabis remains illegal under federal law, the U.S. Environmental Protection Agency, which is responsible for regulating pesticide use, has not established limits in regards to use on marijuana plants.

To address the issue, the Colorado Department of Agriculture has created a list of allowable pesticides and criteria for what is acceptable for use.

Mitch Yergert, director of the CDA's division of plant industry, said his agency has established criteria for pesticide use on cannabis. Most notably, the product must be labeled as safe to use on crops or plants intended for human consumption. 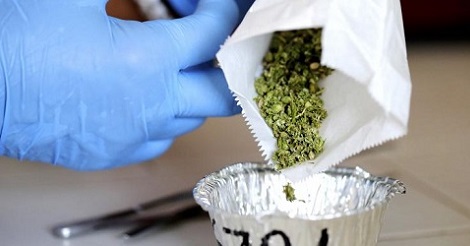 T
Testing Of Colorado Marijuana For Contaminants To Begin This Year