Well, here we go! First, background. This is my second attempt to grow pot. Here is my first attempt. If you don't read anything else from that thread, read about my setup.

Those plants are doing well in better hands, and I have done well with the ones that replaced them. In fact, I vegged them fairly successfully for 39 days and I feel like I'm getting it. I think my biggest problem has been and still is knowing when to feed. But I seem to be doing fine.

As there does not seem to be a facility for uploading text files, I have put them on a public download site. I don't want to post these lengthy things to the thread and neither do you, but they are worth a read I hope. Stay safe. If this is an issue for anyone, I will edit it out (assuming I still can :shrug: ).

Now that the record keeping is done... 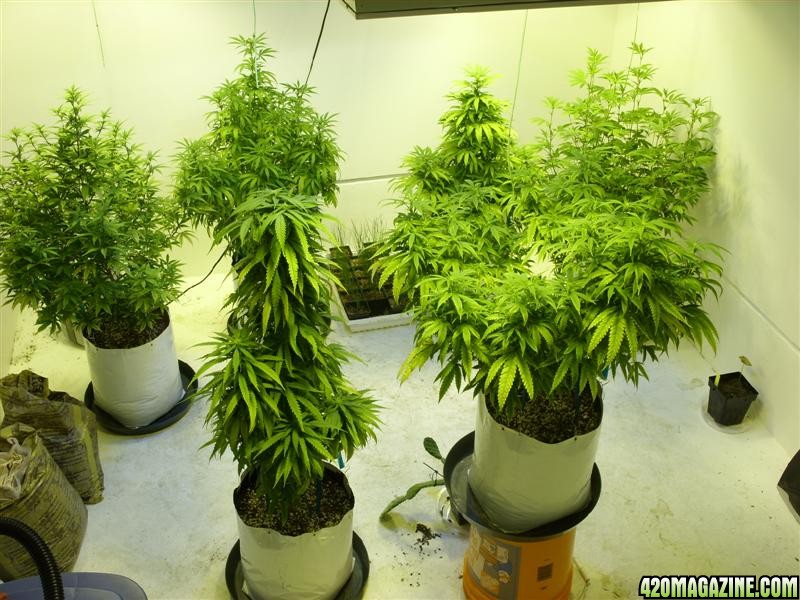 On the left you are mostly seeing the PG4. I tied it out. In fact, I tied several down and/or out. You'll see it in the pictures. They are doing great and I had no real trouble with that.

Here is Pot of Gold 1 (POG1), and 2 (POG2). They are quite different considering they are clones: 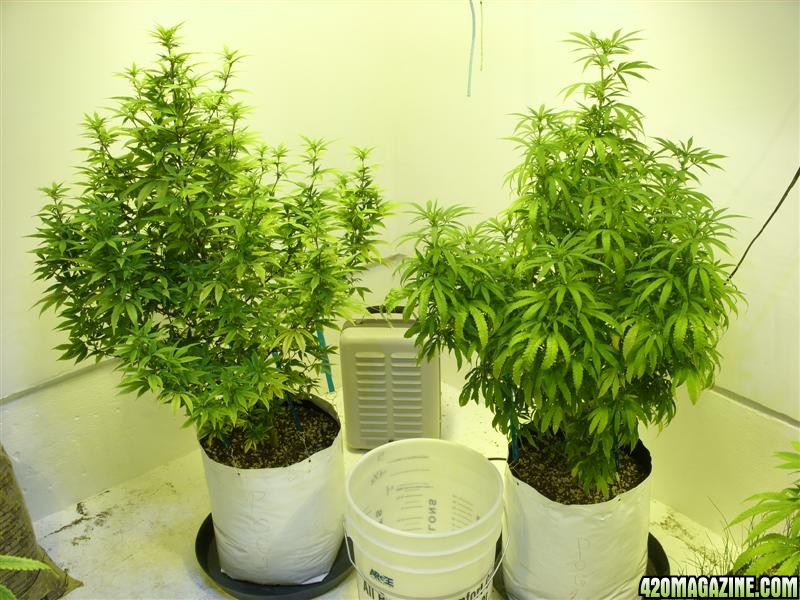 Then we have Lavender (L) and Kaia Kush (KK). The KK is the youngest, but it'll triple and it's already big enough. 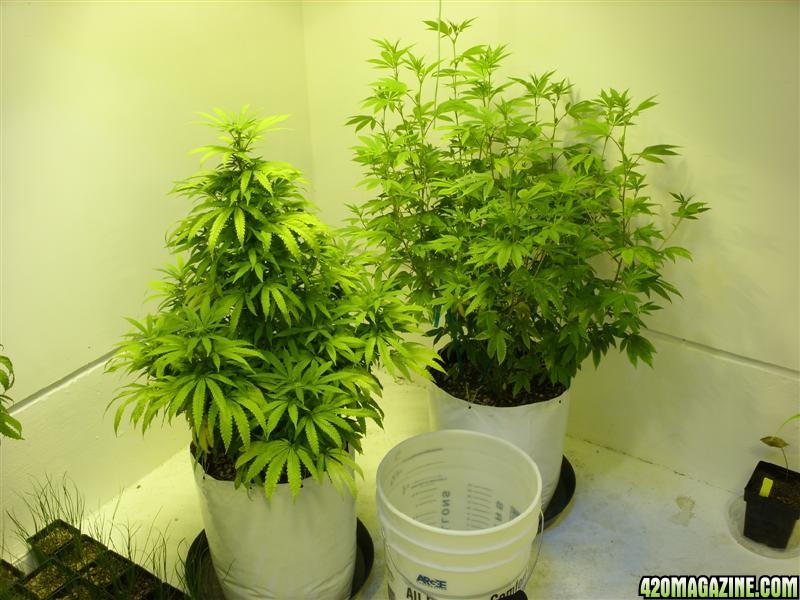 Finally PG4 (that's all I know) and Gravity (GV). I tied the PG4 out into a great big bowl, so it needs to be on a bucket right now to keep up, but make no mistake, it is formidable. Pictures don't do it justice - it's putting up tops in a 28 inch diameter circle. Woot: 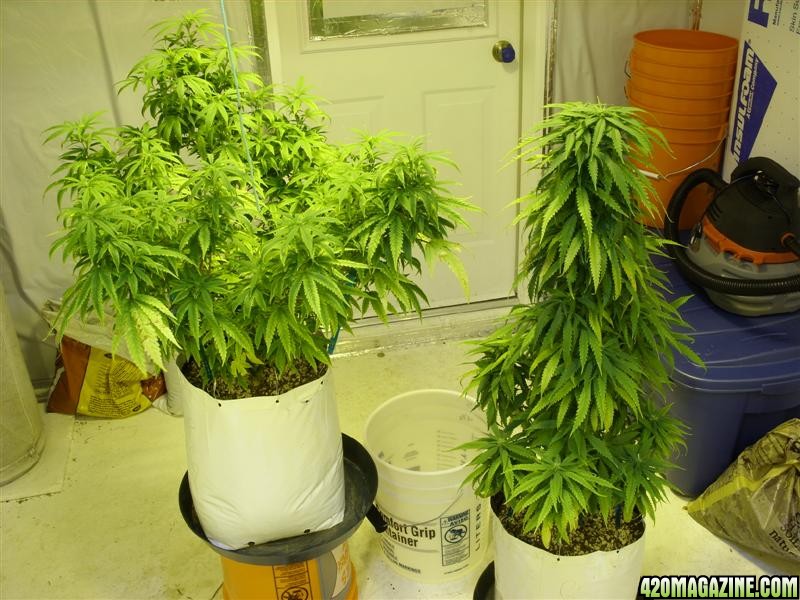 With them in the room are a flat of garlic chives, a cactus, and a dead laurus nobilis cutting.

The garlic chives are a weak attempt at companion planting. I have read that spider mites are repelled by them: 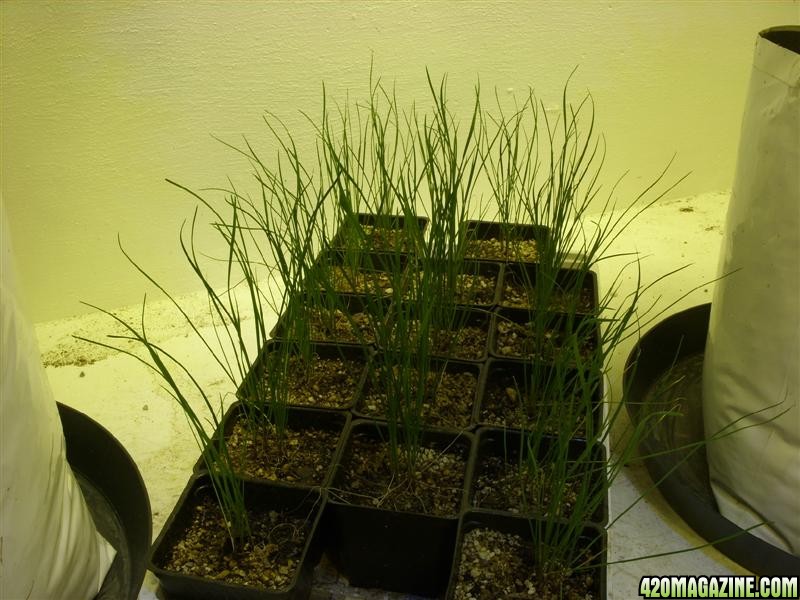 The cactus is one of a few that got left out over winter in the rain. Most exploded. This was the only survivor. When these get dry, they flop over. He's still rather plump though. When he gets thinner, I'll feed him, and he'll stand right up. He needs a bigger pot so he can root in multiple places and form a patch: 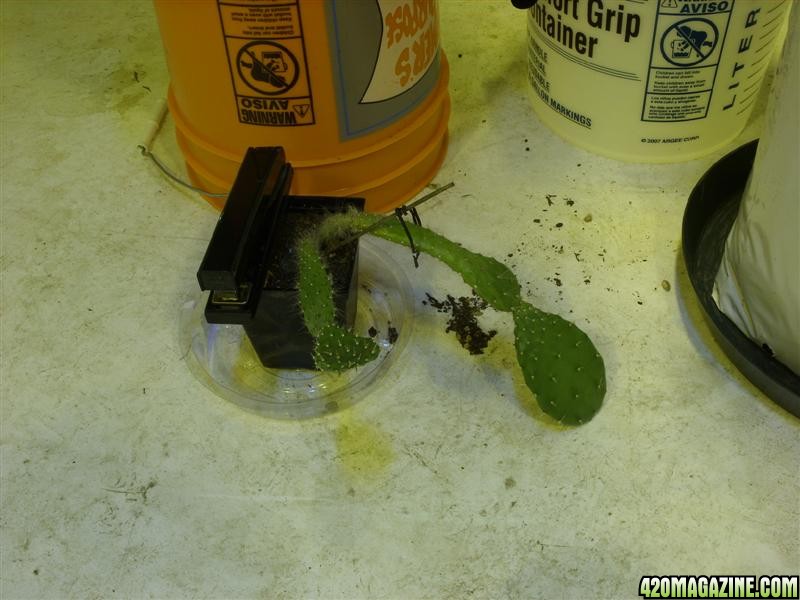 The last is the laurus nobilis, better known as Bay Laurel, the source of bay leaves you cook with. They are apparently quite difficult to propagate successfully. I read that even seeds are rare to take and could need 6 months to do it. This one is dead, but it poses no risk and my wife is sentimental about the little guy. So he's still here: 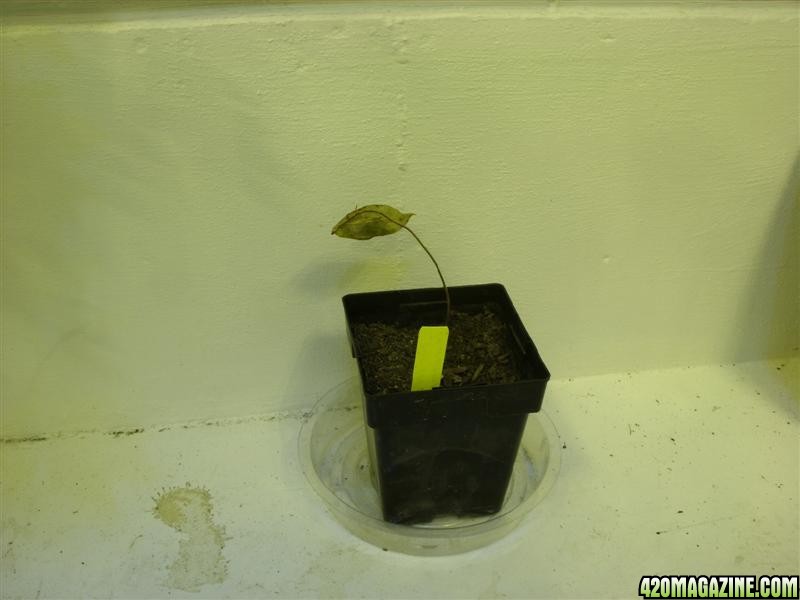 I have a veg under floro tubes in a 3x6 flood table (not hooked up yet). Lots of residents there: 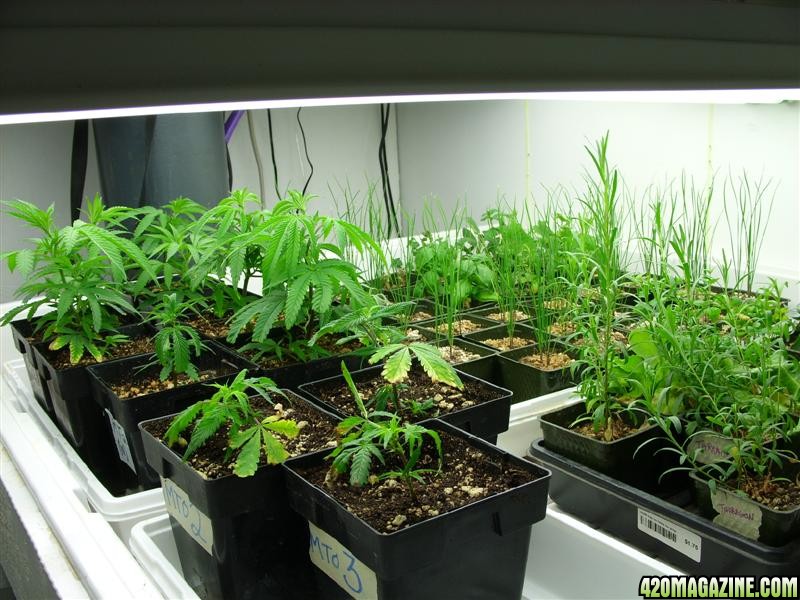 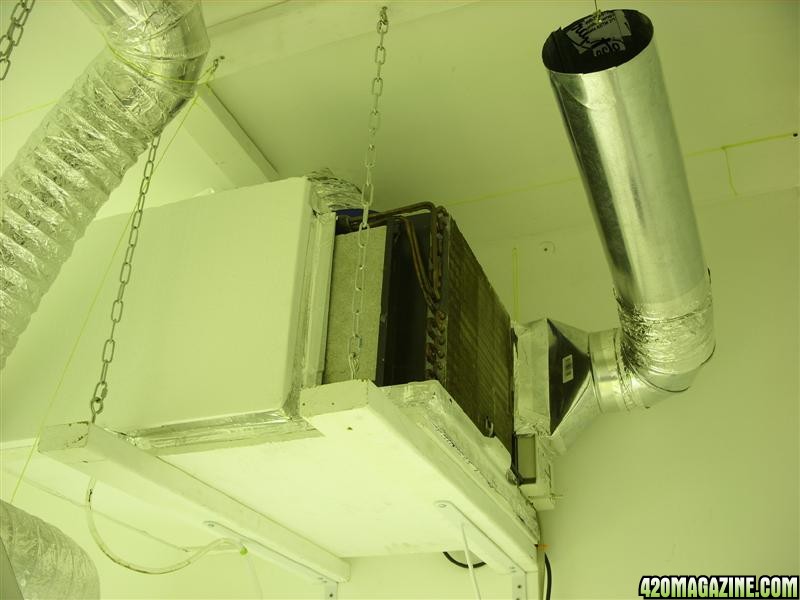 Other changes include better ducting of warm exhaust and my new wet-vac. The ducting now is forced out instead of venting to the garage space. That made it too hot. Now I have 6" ducts like this in the attic space: 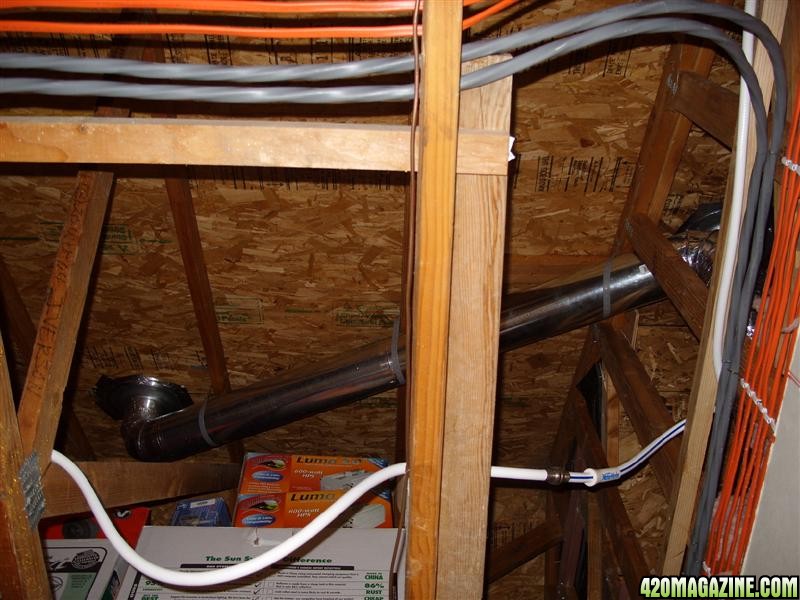 And I got this little wet-vac. I don't know about you guys, but this is awesome for sucking the excess water out of the drip trays. You can find it at a local major hardware chain for $30 and it works great: 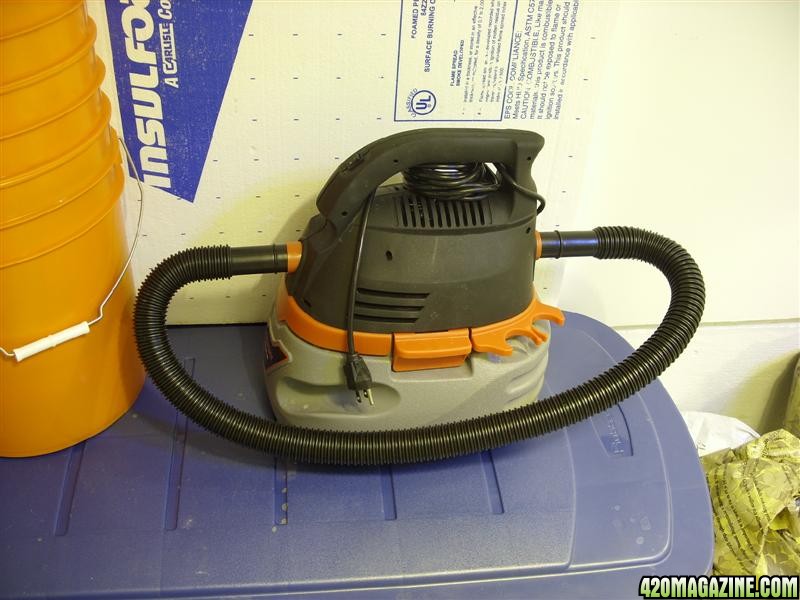 So now some details:

Today (5/16) is day 11 for the bloomers. The L is expected to finish around 45. The rest are supposed to start finishing at 60-ish days. They are in all organic soil with (also organic) amendments (I'll have to find the specifics). They are in 7 gallon grow bags.

I have AC/heat and humidity under control. Temps in the upper 70's and humidity in the upper 40's. They have two 18" oscillating fans on opposite sides of the room to hassle them continuously. There is a carbon filter and 6" inline fan scrubbing the air continuously, but the only outside air comes in through the door. It is a sealed room. I have supplemental CO2 in a cylinder with solenoid and controller, although I have yet to open the valve. Soon.

I take measurements and keep records, and I will share them. For instance, here's their growth since I got them. The vertical red line is the changeover from the former 21/3 light schedule to their current 12/12 bloom schedule: 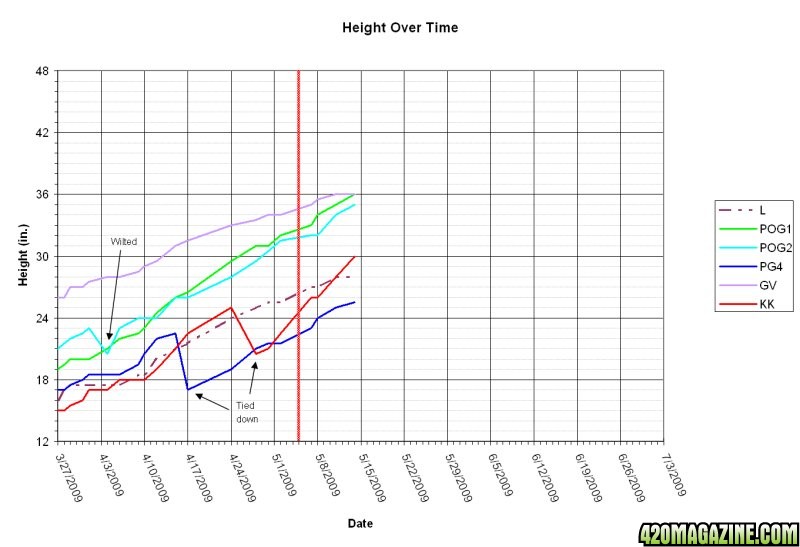 I'll keep an ongoing record with pics as well as I can here. I'll also talk about the improvements I make, including the automation software I'm developing for my grow.

If you have questions, ask. I'm easy going and hard to offend. I like to talk almost as much as I like to smoke.

For now, though, I'll leave you with a picture of the door that leads to the bloom room. It's a backdoor I removed from my house and replaced, and now it lives a second life in my grow space. I painted it white, blacked out both sides of the window with black/white poly, and gave it all new gaskets. It's solid and light tight. 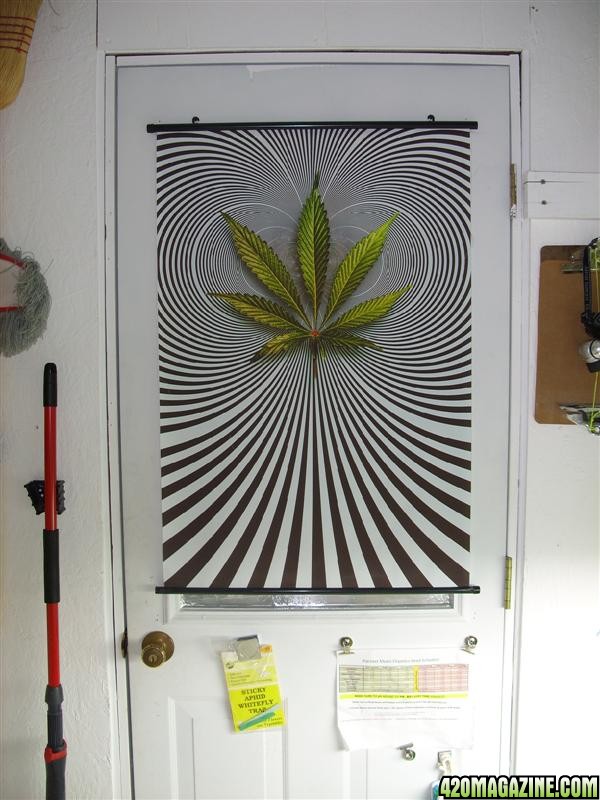 great grow! I love the analytics!
"None of us get out of here alive"

Nice work with the charts.:smokin:
I'm in

Got a new TDS meter: a Milwaukee T75. I had a Eutech TDSTestr (Low), but the retainer ring for the probe cracked and the meter got wet inside and died. I should have been more careful I guess. I might be able to replace the probe, but I need a good meter regardless. Maybe later I'll try to fix the old one as a backup.

The new meter has the same conversion factor as I was using on the Eutech (0.5), so it should be consistent. I calibrated it to 1382 ppm per instructions using the sample calibration solution. I better get some more ASAP.

PG4 and GV are ready.

I watered Cactus and the bloom room garlic chives. I watered all herbs except cannabis in the veg room.

I have a C.A.P. PPM-3 controller and a solenoid on a 50lb CO2 tank. I set the CO2 setpoint to 1300 ppm, and set the valve to a flow rate of 3 SCFH (standard cubic feet per hour). I'm not sure that 3 SCFH is right, but I'll know soon. It's only a 9x9x9 room, so that's 729 cubic feet. Adding 3 cubic feet, and assuming it is leaking out somewhere to bring the air back to std. pressure, that means the new CO2 alone will add 4115 ppm on top of the already existing 750 ppm. It doesn't add directly, but it's clearly enough. It should allow it to run for short periods at a time.

So I couldn't sleep. Too hot, and my knees are aching. Here's some pics.

First a couple of budding shots. Here's the Lavender (L): 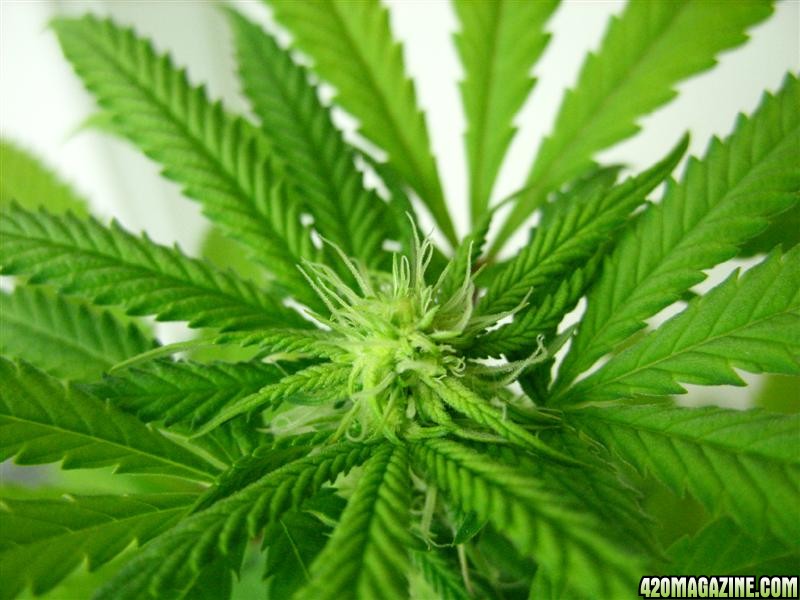 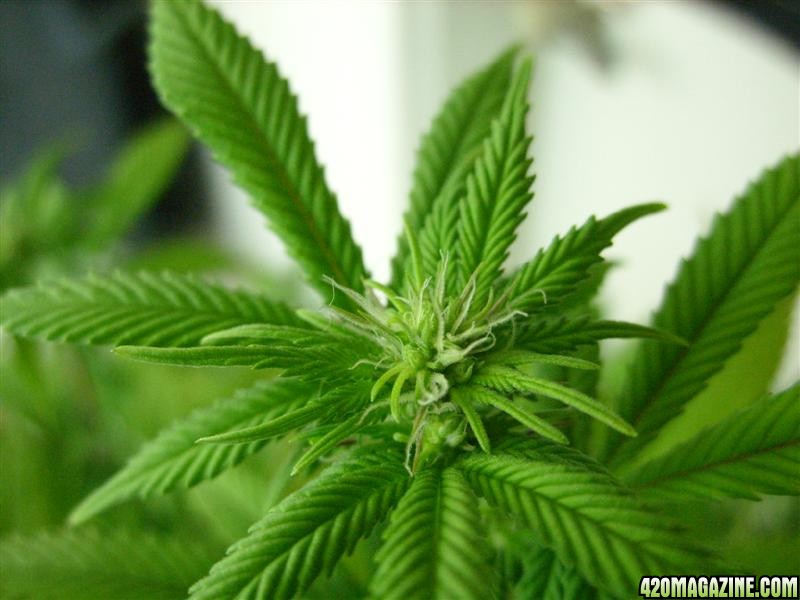 Here is a shot of the PG4 from directly overhead. You can see how tying it out opened up a lot of tops: 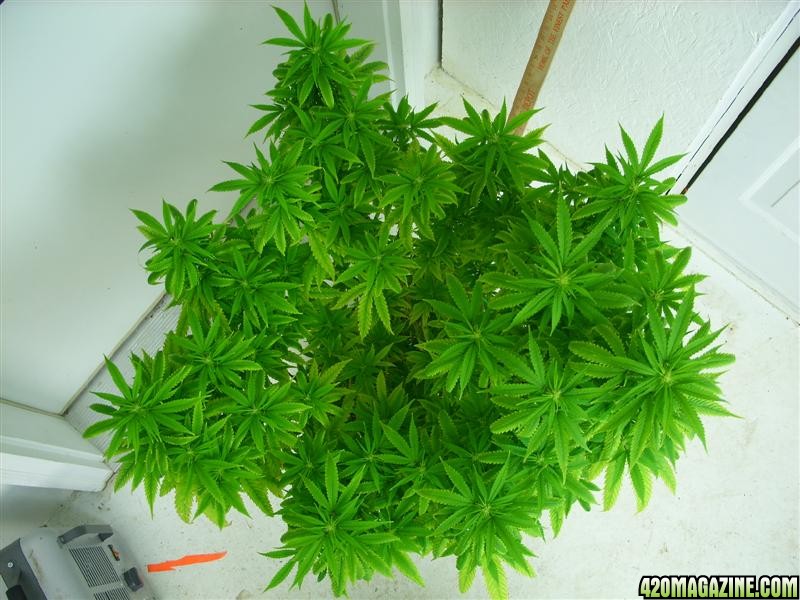 This is Gravity (GV), It's like a wookie. Except at the very bottom, none of the side branches are long enough to stick out. Strange looking plant: 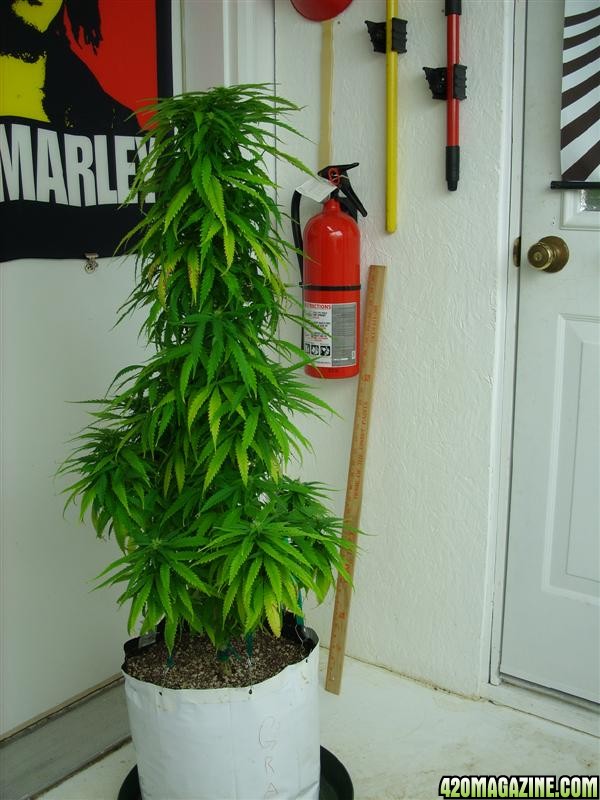 And here's my best bud shot. It's the GV. Slightly out of focus: 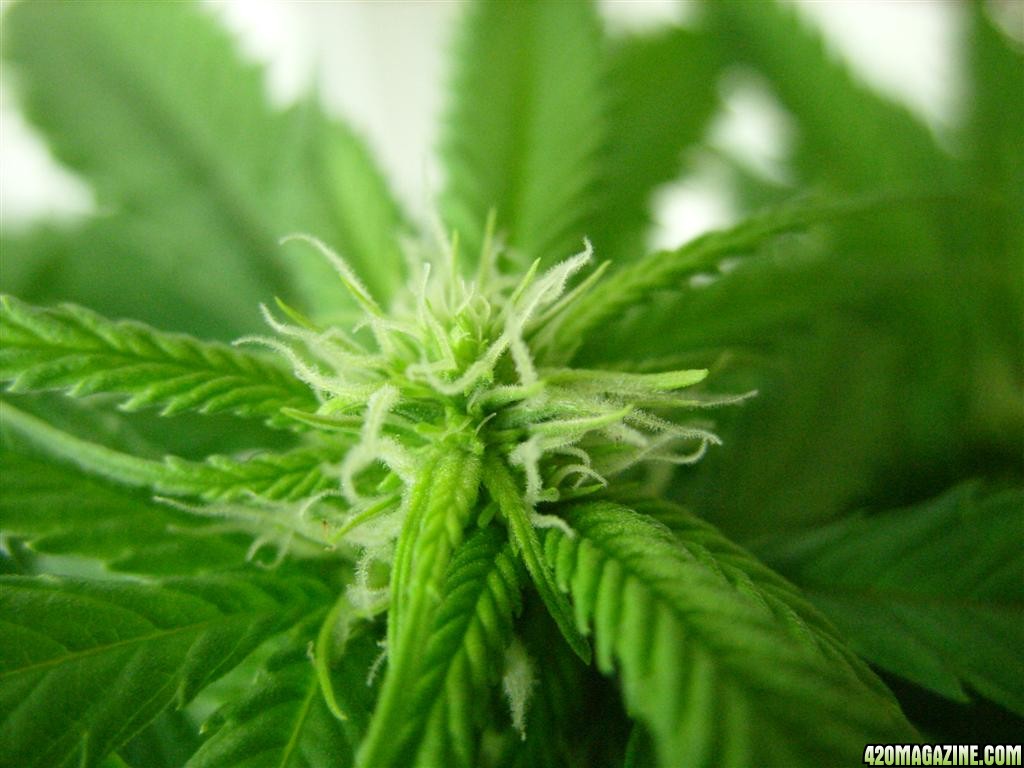 Finally, here's a shot that shows the Kaia Kush from the side. Lots of tops here too. I think I'm going to be tying her down again though: 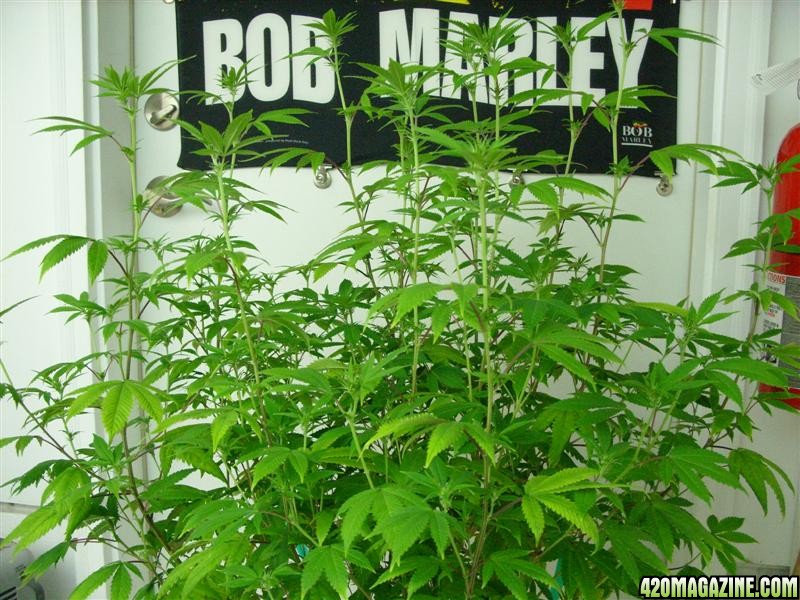 Your buds are looking tastie.

one of the best indoor i've seen, green and busy, i liked the GV, attitud have this strain ?
WR Indoor Grow - WhiteDwarf/Roadrunner.

Thank you all. I will try to live up to your perceptions.

I've been developing a grow automation system. I'm working in java because it's quick and easy. So far I have a schedule manager and all the objects it needs. It doesn't have a timer loop yet (another class) but it does provide scheduling queues, both clock style and interval. So I can provide an arbitrary set of times, or intervals, each with an associated state (like ON or OFF) to trigger changes to USB controlled relays (phidgets.com). It supports basic states like on, off, null (no change), as well as allowing more complex actions. It has 1 second accuracy, and can forecast incredibly long interval patterns. It's multi-thread safe.

Next is an actual timing loop (trivial) and a scheduling interface. I also intend to support USB-based sensors, branching control logic, data logging and and a variety of other details that should be great for any home automation, but especially for growing. I also want to create a sophisticated data entry system to make manual data collection easier. Eventually, I want to be able to monitor and adjust my grow remotely.

Not a new idea. And the vast majority of plans this ambitious tank and never see the light of day. But I have interest, persistence, and enough skill to do it. Might as well try. I would like to be able to check on my grow via a secure wireless web connection, from a coffee shop in Amsterdam, someday.

i would like to do the same aberration. totally automated! (it still takes care)

very soon, i will get an intellidose. its expensive, $1500. they make a climate conroll as well.

full automation control to dose a resevoir to control ph and up to 8 part nutes. everything is computer controllable and has impressive data logging.

I am also a handy DIY, but for the price, you cant build something better than this.

tak a look at it if you haven't before.
Live in the moment as much as you can, but don't let that deter you from hatching your plan.

that would be great ... i have seen something like that but it was basic setup ... remote on/off lights and ventilation ...(pc box)- al conected to laptop
But your idea is taking it to the next level .
hope you'll make it
+++reps

Transplanted 3 more Matty clones ('old pheno') into 5" pots. Named them MTO4-MTO6. I powdered the roots on the outside of the plugs with wonder dust while exposed. Then I watered them in with plain water. pH 6.24 @ 16.4 C. I put them under the floros with the others.

I also re-arranged the blooming girls. Here's a high shot. That's the PG4 in the very foreground with the Kaia Kush just behind and kinda blending in. Then arcing across the background from left to right is Pot of Gold 1 and then 2, Lavender, and Gravity. This is a better light distribution I think. I also re-adjusted the lights: 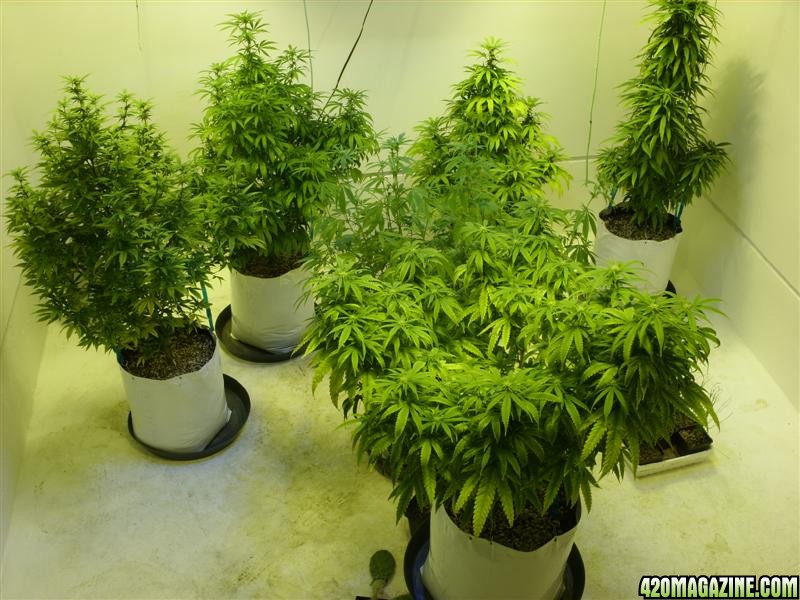 I cleaned up as well. So the bloom room is looking clean: 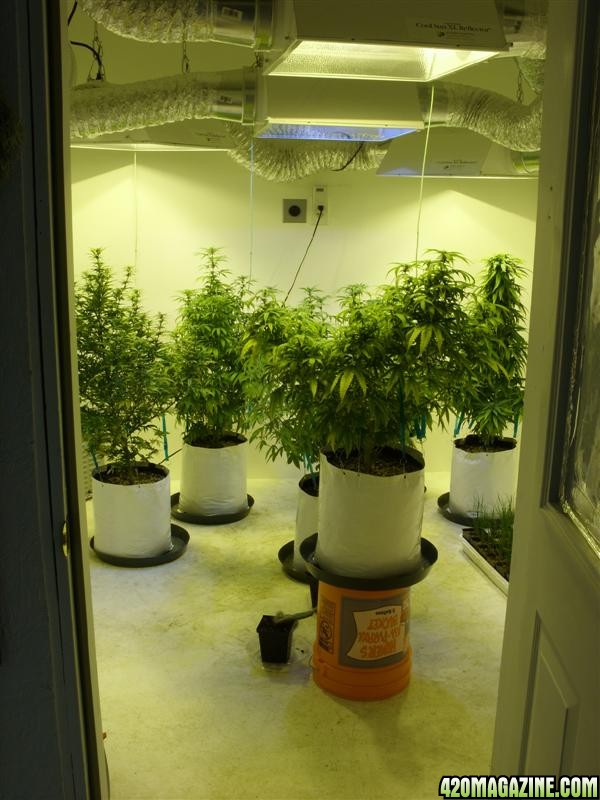 As is the veg. There are the three new transplants in the front with red writing on the labels. There is one more clone under the dome over there. It looks like it's OK, but no roots yet. Patience: 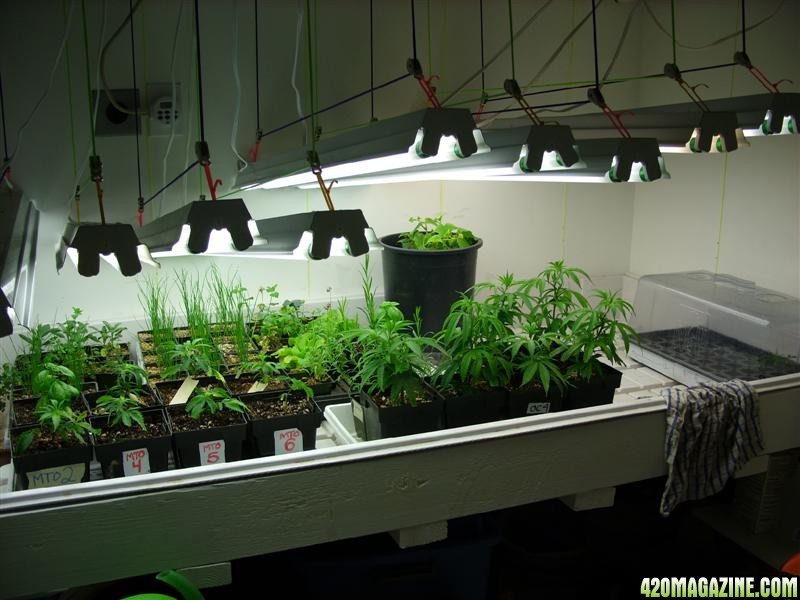 I even straightened up the work area: 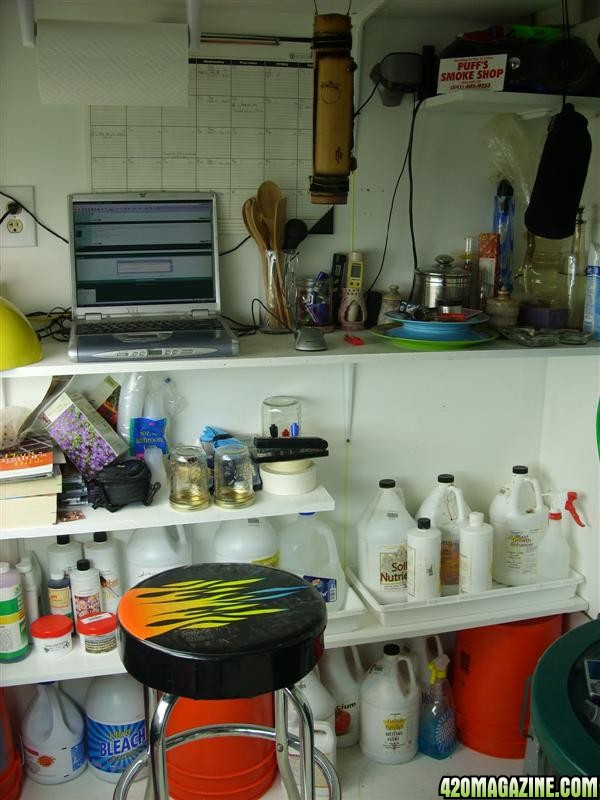 What a setup nice and clean and your plant's are green and healthy.

+rep for the killer setup. Crap it won't let me this time but I will as soon as i can.

All the bloomers are thirsty. 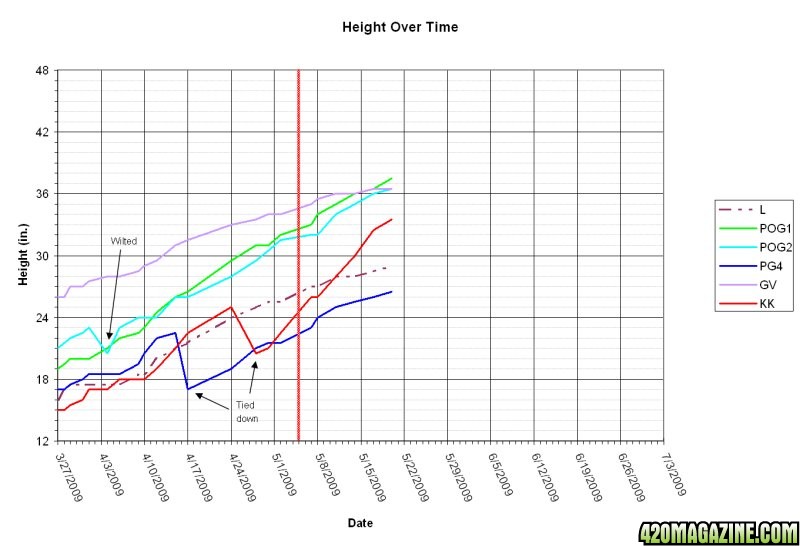 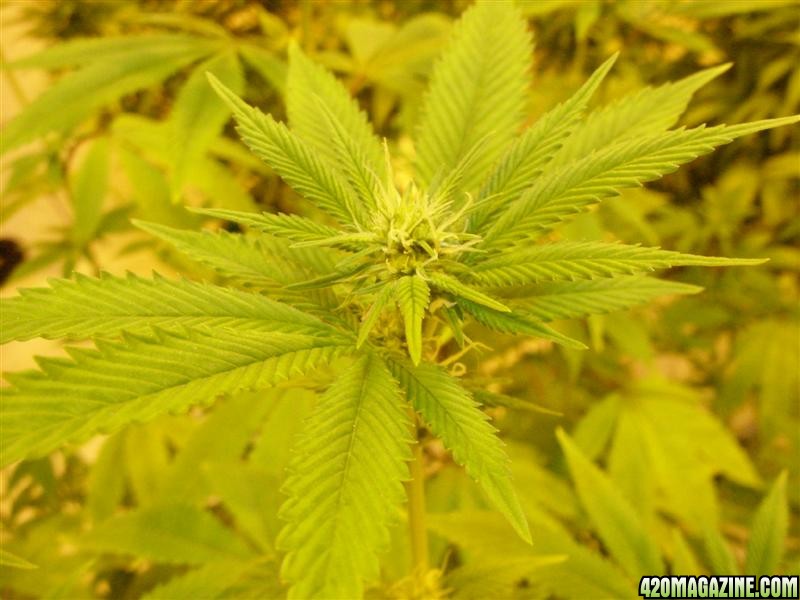 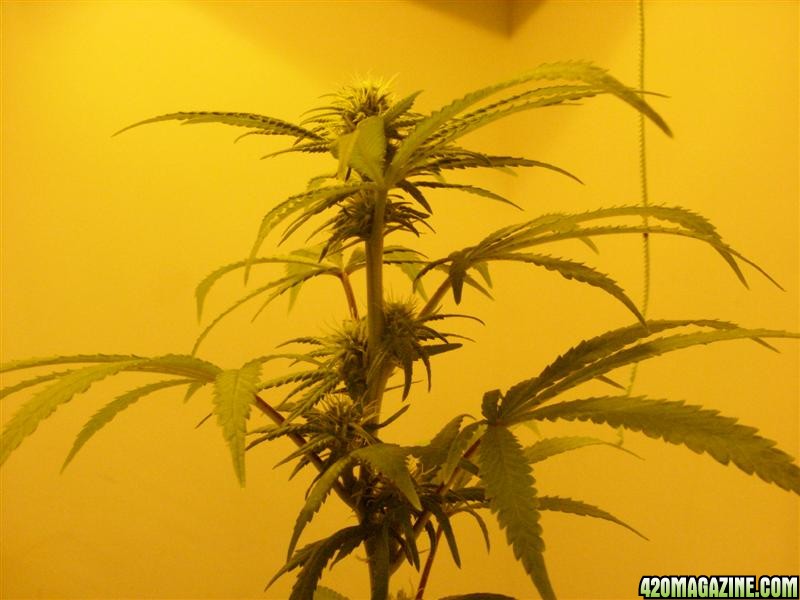 I'm getting faster, but it still took nearly 2 hours to do all that and post this. Whew!

I am glad to see that the 2nd go around you are patiently working things thru better than before. The plants are in very good health and I look forward to seeing this one to fruition. Job Well Done.