The manager of a Vancouver medical marijuana dispensary has offered help to the people trying to resurrect a similar dispensary in Langley.

Well-known marijuana activist Dana Larsen​ said assistance from the Vancouver Medicinal Cannabis Dispensary could include loans of money and marijuana on credit to re-establish the Langley Medical Marijuana Dispensary that was closed down following a July 19 raid by the Langley RCMP.

"Our dispensary has donated medicine and cash to other dispensaries that get into legal trouble," Larsen told The Times.

The Vancouver Medicinal Cannabis Dispensary has been operating since 2008

Like the Langley dispensary, the Vancouver facility has far more clients than the two-per-legal-grower limit allowed under current Canadian law.

But unlike Langley, the Vancouver dispensary has been able to operate without police interference.

Larsen said Vancouver authorities are generally more "enlightened" about marijuana and other drug issues than other Lower Mainland communities.

"We [the dispensary] have a very good relationship with the Vancouver Police Department and the mayor," Larsen told The Times.

He believes municipal police forces like Vancouver have more flexibility when dealing with pot dispensaries than communities where policing is provided by the RCMP, which operates as a federal police force.

"The RCMP have no middle ground," he said.

"They can only come in and arrest people."

Larsen was in the audience when Langley dispensary founder Randy Caine told a public meeting on August 2 that the service will be revived, but not by him.

At that time, Larsen stood up and made a public offer of aid.

"Those are the kinds of things we try to do," Larsen said.

He estimates there have been four recent raids on B.C. pot dispensaries over a one-month period.

Besides Langley and Comox, police have also shut down dispensaries in Burnaby and Chilliwack, he said.

"People are opening a lot of [medical marijuana] dispensaries so there's some push-back," Larsen said.

"This is an issue whose time has come."

In 2008, he ran as the federal NDP candidate for West Vancouver–Sunshine Coast–Sea to Sky Country, but resigned after videos he recorded for web-based video channel Pot-TV in 1999 surfaced showing him taking LSD and smoking marijuana.

He also ran for the NDP provincial leadership earlier this year, on a platform centred on ending the war against marijuana. He received 531 votes on the first ballot. 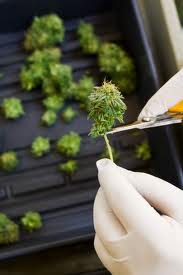