The Portland Cannabis Convention, put on by the New England Cannabis Network, brought together patients, caregivers and businesses that serve the medical marijuana industry. About 60 vendors from across the region set up booths, while experts and advocates spoke on panels about a variety of topics, including medical marijuana and the law. The convention continues Sunday at the University of Southern Maine in Portland.

About 1,500 people attended the convention Saturday, according to event organizers. Booths set up at the convention featured a variety of products, including organic compost, lighting systems, glass pipes and vaporizers.

The arrival of the Portland Cannabis Convention in Maine comes as states across the nation consider legalizing medical or recreational use of the drug. While the focus Saturday was on the state's medical marijuana program, there was also discussion of a 2016 ballot initiative that would legalize adult use of marijuana. The Campaign to Regulate Marijuana Like Alcohol — the group soliciting signatures on the bill written by Legalize Maine to set up a regulatory framework for recreational sales — collected signatures throughout the day.

Many speakers at the convention praised what they described as a strong, patient-centered medical marijuana program that can serve as a model for other states. Maine is one of 34 states that allow some form of medical cannabis. Maine legalized medical uses in 1999 and the state's first dispensaries opened in 2011. Last year, Maine's program was voted the best medical marijuana program in the country by Americans for Safe Access, a national group that advocates for legal access to medical cannabis.

"We're watching what you're doing up here and you're blowing us away," said Mike Fitzgerald, co-founder of the New England Grassroots Institute, a Quincy, Massachusetts-based group that offers classes for patients and caregivers.

Catherine Lewis of the Medical Marijuana Caregivers of Maine, a trade group that advocates for patients and caregivers, said the stigma around medical marijuana has lessened in recent years, but there are still changes that need to be made to clarify gray areas of the law and protect patient and caregiver rights.

Lewis said the group is currently concerned about inspections being done by the Department of Health and Human Services with inspectors from the Maine Sheriffs Association. State officials have said the compliance checks are done to follow up on complaints, but Lewis said the inspections are problematic because they don't involve warrants and caregivers are asked to bring the inspectors into their grow areas, which is a violation of law.

A bill that would have required DHHS to submit a complaint inspection plan to the Legislature for approval will not be considered during the upcoming session. The decision not to include that bill is being appealed.

Rep. Diane Russell, a Portland Democrat who has submitted multiple legalization bills and legislation to support the medical marijuana program, said the stigma around medical marijuana still exists in the Legislature, though she sees progress as more politicians become more familiar with the program.

"The reality is marijuana has been part of Maine's culture for decades," she said. "People always say to me, 'Why don't you legalize it and tax the hell out of it?'"

Paul McCarrier, a caregiver and advocate who helped craft the legalization proposal, said Mainers seem ready to allow adult use of marijuana.

"Cannabis is a really important part of this state, both as a medicine and for the economy," he said.

The convention also highlighted local businesses that have benefited from the cannabis industry, the fastest-growing industry in the United States. It has an estimated economic impact of up to $11.1 billion in 2015 and is expected to reach $29 billion by 2019, according to The ArcView Group, a California-based cannabis industry investment and research firm.

Cameron Bonsey, director of marketing for Coast of Maine, known for its organic lobster compost, has developed a strong following from caregivers. In response, the company developed a special blend — named "Stonington" — specifically for cannabis growers.

"We're dealing mainly with legal caregivers and helping them grow a better product," he said.

Many of the 1,500 attendees appeared to be from Maine, but it did attract people from out of state interested in the educational aspects of the convention.

"Learning about the medical aspects is fascinating to me," said Diane Yeaw of Rhode Island, who drove up for the weekend with her partner, Pat Richard. Both have used medical marijuana to treat medical issues, including cancer and arthritis.

Zack, a medical marijuana patient from Kittery who declined to give his last name to protect his privacy, said he was "impressed by the level of conversation" during panel discussions and with individual vendors.

"I'm blown away by how impressive the system here in Maine is," he said. 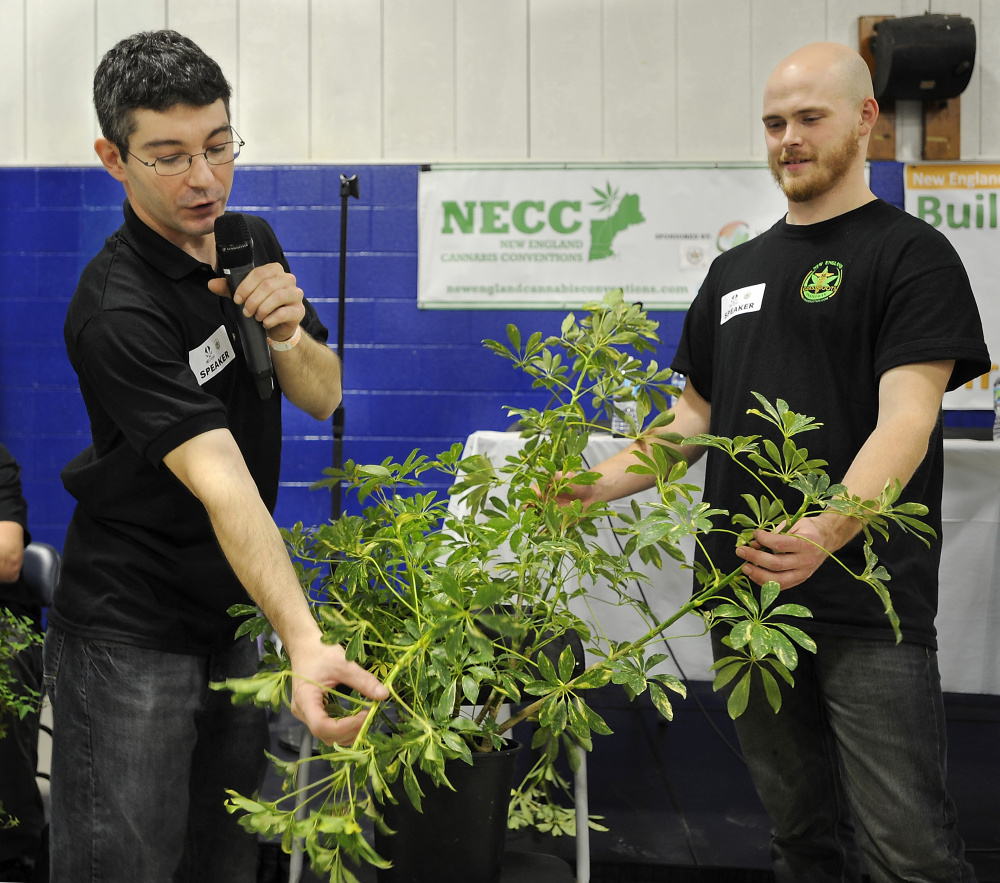