A new report from the Center on Juvenile and Criminal Justice adds to the growing body of evidence that legalizing or decriminalizing marijuana does not lead to any number of doomsday scenarios envisioned by legalization opponents. Looking specifically at California, where full marijuana decriminalization went into effect on Jan. 1, 2011, the report finds that "marijuana decriminalization in California has not resulted in harmful consequences for teenagers, such as increased crime, drug overdose, driving under the influence, or school dropout. In fact, California teenagers showed improvements in all risk areas after reform." 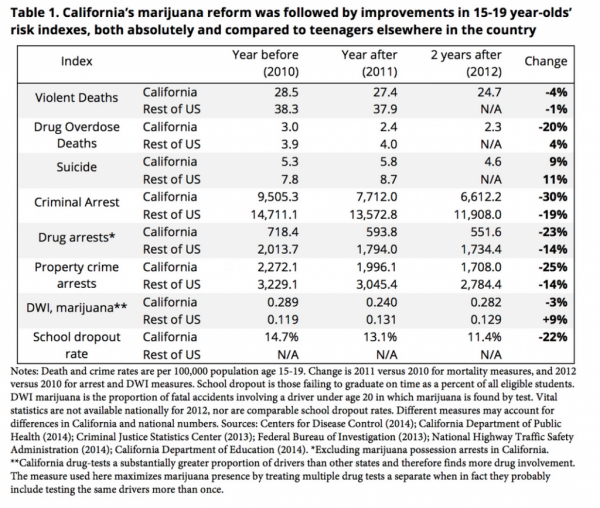 Most notable in the above table is the drop in school dropout rates. Recent studies have suggested links between heavy marijuana use and low school completion rates. But many experts question the direction of causality in this relationship, suggesting that there could be any number of confounding factors that account for this relationship. While it's still early in California's decriminalization experiment, the numbers above should suggest we cast a skeptical eye on claims of plummeting academic achievement in a post-legalization world.

In fact, as the report authors write: "By a variety of measures, California's teenage behaviors actually improved dramatically after marijuana was effectively legalized – improvements that occurred more weakly or not at all among older Californians and among teenagers nationwide."

Now of course this doesn't address causality, and these numbers shouldn't be taken to imply that decriminalization caused these declines. But they do show, pretty clearly, that in the two years since full-scale decriminalization went into effect, California's kids are still all right. The sky hasn't fallen. And they add to a mounting body of research that shows, for instance:


By contrast, there is little evidence of increased social harms in states where marijuana has been decriminalized. The one credible study I'm aware of is a DEA report finding that more Colorado drivers involved in car crashes are testing positive for marijuana use. But a bucket of salt is needed here: unlike alcohol, inactive marijuana metabolites remain in the body long after consumption - days or weeks, depending on frequency of use. But the presence of metabolites doesn't necessarily indicate you were high at the time of the test - only that you got high some time in the days or weeks prior.

Even if we accept that more Coloradans are using marijuana, and that some of them are getting behind the wheel while stoned, we still have to note that traffic fatalities are down overall - this is likely because it's far less dangerous to drive stoned than it is to drive drunk. This would suggest that some Coloradans are using marijuana in place of alcohol, rather than in addition to it.

In short, the barrier of proof facing legalization opponents is incredibly high. In order to present a compelling case against marijuana liberalization, they have to demonstrate A) that liberalization is associated with a negative outcome; B) that that association is indeed causal, not just coincidental; and C) that the harms from that negative outcome are greater than the myriad harms caused by blanket prohibition of marijuana. But so far, state experiments with liberalization have not produced any consequences that pass even that first test. Considering that we're now close to 20 years out from when California voters first legalized medical marijuana, this should be reassuring news for everyone.

Nope, the sky didn't fall just because Chicken Little said it would.
Radogast

Its all messed up forsure. We pray each night before Dinner that the prisoners will be released the following day

Nov 12, 2009
sicntired
S
K
California Arrested Nearly Half A Million People For Pot Over The Past Decade