AK: Getting The Green Light - Mat-Su Pot Ready To Go

The biggest immediate impacts, borough-wide, are likely to be felt in regards to an amendment exempting limited cultivation facilities from having to apply for a conditional-use permit.

Such facilities are defined by the State of Alaska in part by their size of 500 feet or less.

The assembly did not pass an amendment to eliminate the permit's 100-foot setback requirements for marijuana businesses, something cannabis advocates and several people testifying at the public hearing asked for. No assembly members motioned to introduce that ordinance.

Wearing a bright red dress, marijuana industry consultant and borough marijuana advisory committee chair Sara Williams delivered a high-volume impassioned address to the assembly during the public hearing, asking it to introduce and pass both a limited cultivation exemption, and a reduction of the permit's setback requirements.

"My purpose in this world is to light a fire under your asses, and everyone else's, to guide us to economic freedom," Williams said. "The truth is without legal, regulated cannabis products being sold in state, we only go backwards. With no new reasonable tax revenue sources, we are lost."

Several other marijuana business owners advocated for the same changes, but in the end, they got half of what they were hoping for — exemptions for limited cultivation facilities, but no reduction in setback requirements for other businesses such as retailers or large cultivators.

The biggest controversy, and the biggest surprise, of the night came from Kowalke's introduction of an amendment to grandfather in all marijuana businesses that exist inside a borough Special Use District or Residential Land-Use District, if their state licensing applications have already been accepted at the state level, prior to the date of instituting the new local-level regulations in the borough. The amendment applies even if the application received by the state is later deemed incomplete.

"What is this, Randall?" asked Talkeetna resident Geri McCann during the public hearing. "When were you gonna let the community know, that all licenses that are submitted, are grandfathered in, whether they've gone through the licensing process or not. Is this what you're doing now, to us? That any license that's been submitted will not be under the CUP regulation?"

In discussion of the amendment during the meeting, Kowalke noted it's designed to target just one business — Joe McAneney's proposed marijuana retailer on Main Street in Talkeetna, High Expedition Company.

That business has been a point of contention in recent borough meetings, with opponents saying Talkeetna should have time to update its Special Use District to regulate marijuana; that the business could harm the image of an area devoted to tourism businesses; that it sits too close to a local park and that the borough should institute the 500-foot setbacks from parks it had originally proposed; and that just because Talkeetna voted two-to-one in favor of a regulated market back in October, doesn't mean they want it on Main Street.

Talkeetna's mayor (the actual mayor, not the more famous honorary mayor Stubbs the Cat) Larry DeVibliss testified, "I would ask you to please seriously consider Talkeetna's dilemma. They have a SPUD in place which will enable them to fix that with time. But if you grandfather something in there, it's there. It can't be taken out legally."

McAneney testified that he's done his due diligence as a business owner, and has already faced too many delays. He said that, through a partnership with the Talkeetna founding family that originally built the cabin his business is in, he will actually improve the value of the local tourism industry by enabling the building to be put on the National Registry of historic sites.

In an interview Thursday, Alex Strawn, development services manager for the borough, said that an initial review by the borough indicates the grandfathering amendment won't impact any other businesses besides McAneney's that aren't already exempted under the limited cultivation amendment.

In interview after the ordinance passed, McAneney said he didn't know before the meeting about the grandfathering amendment.

"I didn't know it was coming," McAneney said. "But I had some advice from an attorney to guide me. And come to find out, precedents in other industries is that, if you've already initiated and you're under the licensing process, and the regulation has changed, they cannot enforce that upon you."

Strawn said the borough and assembly did receive a letter from McAneney's attorney, dated Jan. 5, and provided a copy to the Frontiersman.

The letter, from Philip Paul Weidner and Associates, states, "I understand an amendment is going to be proposed (possibly by Assembly Members Jim Sykes and / or Randall Kowalke) 'grandfathering in' companies and / or persons that had previously applied for a State Marijuana License under then existing code before the Resolution 16-136 amendment."

The letter further states that, "If the Amendment is not introduced and passed, we reserve our rights to take all legal actions as to any attempted prejudice to and / abrogation of the vested rights of High Expedition Company."

In a phone interview Thursday, Kowalke said he has a "verifiable timeline" that shows he asked for the grandfathering amendment before the borough or assembly received communications about it from McAneney's attorney.

He said he asked for the amendment hours before the letter was received.

"No, I did not know that he was going to have his attorney threatening litigation prior to my amendment," Kowalke said.

When asked whether the potential for litigation had an impact on his own decision to advance the amendment, Kowalke said, "It may have had an impact on the other assembly folks, since they received a copy of it. Had that letter not come out, there might have been more pushback or discussion from the other assembly folks. But it had no impact on me. I decided to do that because it's the right thing to do. It would put out this fire out. I wanted it dealt with."

Kowalke said he already caught some heat previously for calling for a moratorium on letting legal marijuana go through at the local level until a vote of the people could be held last October on the issue. Now, he said, he's been facing demands from some in Talkeetna for yet another moratorium, to wait until the local community council updates its Special Use District, in an effort to ban McAneney's shop.

Kowalke said he's been unfairly maligned by a small group of people in Talkeetna, in particular, "Geri McCann and friends," who don't want to see McAneney's shop go in on Mainstreet.

In discussion on the grandfathering amendment during the meeting, Kowalke noted McAneney had already faced many delays, including the most recent one related to the marijuana ordinance public hearing being cancelled during the original late-December meeting. At that time, it was determined the borough had failed to give proper public notice, and the hearing was rescheduled for Jan. 10.

"If Talkeetna through its community council has a new ordinance for assembly and planning commission to look at through new rules, so be it," he said. "We'll address those as they're coming forward. This is to clear up what I think was a comedy of errors driven by the borough itself." 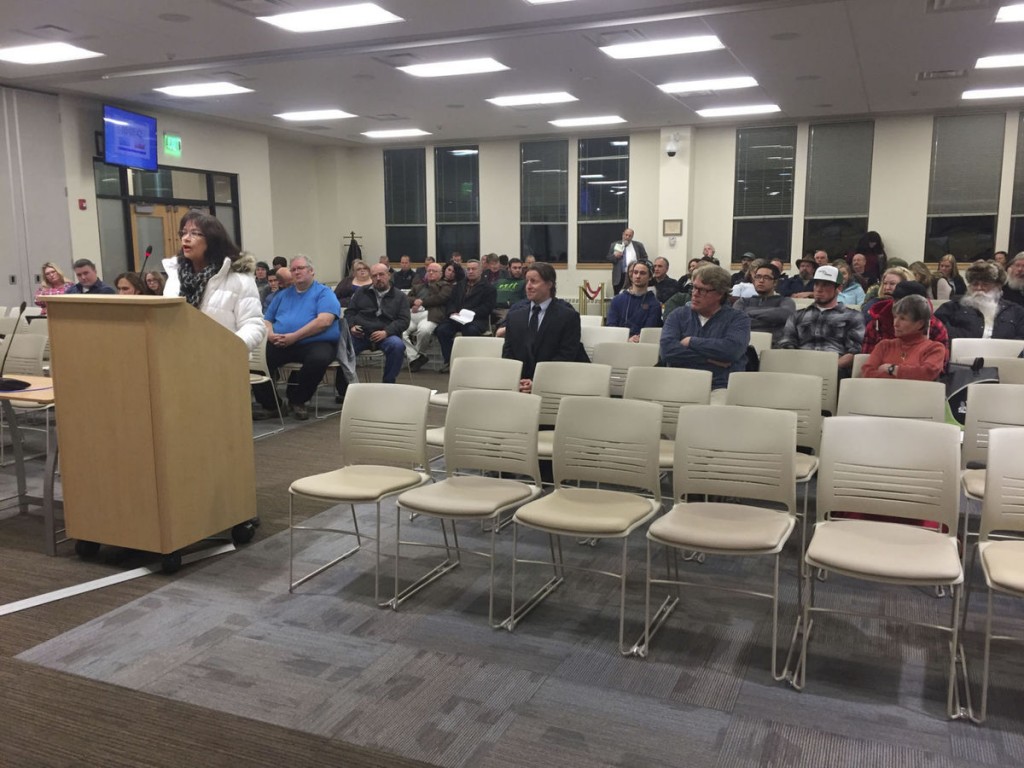