Alaska Congressman Don Young said he's never smoked marijuana. But recognizing that his constituents have voted to legalize it, Young says he wants to change federal law to help marijuana entrepreneurs do business. The issue has Young joining forces with congressmen of different stripes.

They call themselves the "Cannabis Caucus": Two Republicans and two Democrats in the U.S. House who want to ease federal restrictions on marijuana.

Young said one of his top concerns is that marijuana retailers can't use banks. He said cash attracts trouble.

"And my goal is to make sure that if I'm in the business, like we have quite a few in Alaska now, as they do this business, they can run it as a business," Young said. "Get loans from banks, and put the revenue back into the banks, as every other business does."

"They cannot, because of a provision called 280E, fully deduct their business expenses, requiring a much higher effective tax rate," Blumenauer said. "And they have to pay those unfair taxes with cash, because of the banking prohibition. Which is insane."

The four lawmakers who founded this new caucus make for an odd lot. Blumenauer, from Portland, is prone to bow ties and zealous about bicycle commuting. He's been working to legalize marijuana since the 1970s. Republican Rep. Dana Rohrabacher represents Orange County and some of the most conservative cities of California. He preaches the benefits of medical marijuana. He said someone gave him a cannabis-infused candle when he was suffering from shoulder trouble.

"And, yeah, I put it on my arm and guess what? The pain went away for a couple of hours and I got sleep for the first time in weeks," Rihrabacher said.

(Rohrabacher told a few stories of medical success. Young shifted impatiently and at one point groused that time was short.)

Colorado Congressman Jared Polis, a Democrat from Boulder, is socially liberal and a champion of his state's highly developed marijuana industry.

And then there's Young, who happens to be about twice Polis' age and is the second-longest serving member of Congress.

"I'm a conservative. A Republican. But I believe in states' rights," Young said.

To illustrate the odd politics of it, Young said Polis, just this week, accused him of being a "puppy killer."

"I definitely didn't accuse you, Mr. Young, of being a puppy killer," Polis objected. "I said the bill was a puppy-killing bill."

(He meant Young's bill to strike an Obama Administration ban on predator hunting methods on National Wildlife Refuges, which the House just passed.)

It's unclear how many others will join the new cannabis caucus. This is a time of uncertainty for marijuana. More and more states are voting to legalize it, but the new administration could choose to enforce federal law more vigorously than the last. The new Attorney General, Jeff Sessions, was a marijuana foe as recently as last year.

"I mean, we need grownups in charge in Washington to say marijuana is not the kind of thing that ought to be legalized," then-Sen. Sessions said at a hearing in April. "It ought not to be minimized ... . It's in fact, a very real danger."

Young said he's ready to butt heads with the Attorney General if he has to. But Young and the rest of the cannabis caucus say they hope to achieve reforms in law, so marijuana policy isn't subject to an A.G.'s whim. 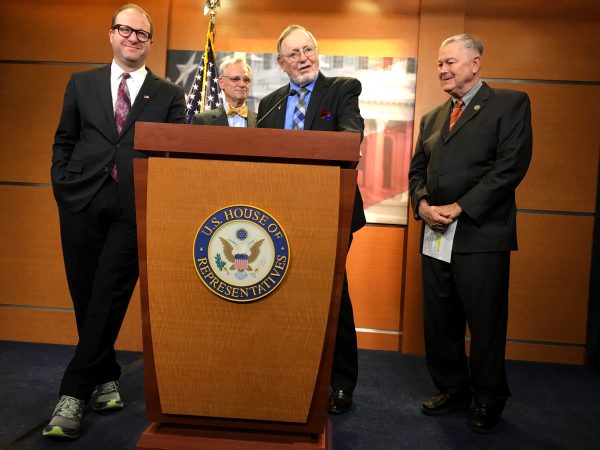