Santa Ana officials are setting aside money to shut down illegal pot shops in the city, poised to become the first in Orange County to have legal medical marijuana shops as most cities have banned the operations in recent years.

On Tuesday, the Santa Ana City Council approved allocating $880,580 for new staffing positions — including five police officers and a sergeant — as part of its enforcement through June 30.

Beginning July 1, enforcement costs will be offset by tax revenue from the pot shops, according to a city staff report.

Councilwoman Michele Martinez urged city staff to provide an update on staffing after five or six months of enforcement to gauge whether more resources will be needed.

Soon after, more than 630 applications were submitted to open a medical marijuana collective in Santa Ana — generating the city more than $1 million in revenue. The nonrefundable cost to apply was $1,690.

In a lottery about two weeks ago, 20 applicants were selected to move on to the regulatory safety permitting phase of the application process, in which the Santa Ana Police Department will have 60 days to review the applicants' backgrounds. Applicants must pay $12,086, non-refundable, to go through the permitting process.

The staffing positions are funded by revenue from the application process.

Measure BB, the city-crafted measure approved by voters on Nov. 4, repeals the ban on medical marijuana facilities that the City Council approved in 2007 to stem the proliferation of such operations.

The city crafted Measure BB to circumvent a different initiative that sought to repeal the city's ban on medical marijuana collectives and for which supporters had gathered enough signatures for a spot on the ballot.

The city's measure calls for 20 collective applicants to be selected in the lottery, but permits them to open only in two industrial zones, in the southern corners of town near I-405 and the 55. Cultivation will not be allowed. 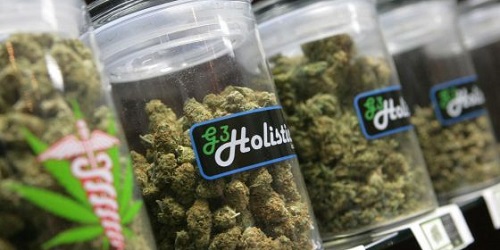