Amsterdam To Weed Smokers: Party On

Pot smokers, you can chill now. Amsterdam has been given a reprieve from the Netherlands' ban on foreigners purchasing marijuana and hashish in its famous "coffeeshops."

Earlier this year, the Dutch government began phasing in restrictions on the coffeeshops, which sell marijuana and hashish legally and under regulation and pay taxes. On May 1, starting in southern provinces, Dutch citizens were required for the first time to present a government-issued "weed pass" for admission to the coffeeshops. Non-Dutch citizens could not get a weed pass, effectively killing the foreign trade. Dutch citizens have largely avoided the weed pass.

The idea was to prevent mostly German, Belgian and French tourists from crossing the border to purchase drugs illegal in their own countries. The ban, imposed by the outgoing national government, was due to roll out — so to speak — to the rest of the country on January 1, 2013.

Yet in an interview yesterday in the Dutch newspaper Volkskrant, Amsterdam Mayor Eberhard Van der Laan said that the new measures will not take effect in Amsterdam, the nation's largest city and biggest tourist draw.

"Amsterdam gets some 7 million tourists per year, of whom it is estimated that 1.5 million visit one of the city's coffeeshops," he said. If barred from the coffeeshops, "The one-and-a-half million tourists will not say, 'then no more marijuana.' They will swarm all over the city looking for drugs," from illicit sources. "This would lead, to more robberies, quarrels about fake drugs, and no control of the quality of drugs on the market," precisely the effects the ban was intended to avoid.

Amsterdam credits the coffeehouse system, in part, with cleaning up neighborhoods where illicit sales once reigned, such as the historic enclaves of Zeedijk and De Wallen. "The city council, the police and the residents have been busy 20 years to reclaim that area," Van der Laan said. If the ban hit Amsterdam, "Everything we have worked towards would be lost to misery."

The newspaper reports about 220 coffeeshops in Amsterdam, about one-third of the total nationwide.

To arrive at this deal with the national Minister for Security and Justice, Amsterdam had to offer assurances of policies of checks and balances on the coffeeshops. "Sales to minors, drugs which are too strong, stocking of too large a quantity, advertising or causing nuisance — we will close in and deal with offenders ruthlessly," Van der Laan said. 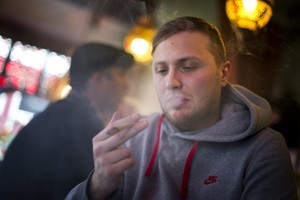