Another Family To Flee New Jersey Over Medical Marijuana

A nurse who has staged weekly protests about New Jersey's troubled medical marijuana program is joining an exodus of families with ill children for Colorado. Jennie Stormes of Hope, Warren County, said she planned to move in a few weeks because she is "tired of being angry and fighting against Gov. Christie" to convince him that her severely sick son cannot get the relief that cannabis might provide because of the state's numerous restrictions.

"I have been fighting for my son's life, and I can't do it here anymore," Stormes said. Her son, Jackson, 15, has a rare type of epilepsy that triggers life-threatening and frequent seizures. Colorado legalized the drug for recreational use on Jan. 1. Since then, Colorado officials have reported an influx of marijuana patients. In February, another New Jersey family that had been active in the fight to change the state's marijuana program moved to Colorado. Meghan and Brian Wilson of Scotch Plains said they were encouraged by reports that cannabis was helping children with epilepsy and were hoping their daughter, Vivian, would suffer fewer seizures.

Nearly two years ago, Jackson Stormes and Vivian Wilson were issued medical marijuana cards in New Jersey, but had to wait months for a dispensary to open. When they finally were able to obtain cannabis, they could not get an edible form, which children can consume more easily than the smokable type allowed under state law. The parents lobbied legislators to address the problem. Christie vetoed their bill, saying he would sign it only if edibles were restricted to children and if at least two doctors approved giving cannabis to children. He said he was not convinced that edibles were necessary for adults and he feared easing regulations could lead to abuse.

The bill was changed and eventually became law. A year later, a lengthy approval process for the edibles has prevented dispensaries from offering these products, Stormes said. "I can't wait any longer," she said. In the meantime, Stormes has been purchasing cannabis buds for Jackson and converting them into a tincture, based on Internet research. But she says this is not ideal. The tincture cannot be tested and the dosage cannot be monitored, she said.

Still, Stormes said her son's seizures have dropped from an average of 10 a day to about three a day. But there are good days and bad days, she said, and still some hospitalizations. "It's convoluted because we've been weaning him off drugs," she said, adding that he now takes two anti-seizure medications and cannabis. Previously, she said, he was prescribed a dozen addictive drugs.

In April, Stormes attended a town-hall meeting and asked Christie why he would not agree to other changes in the program. He told her that he would set up a meeting for her with his aides to discuss concerns. A governor's spokesman confirmed that the meeting took place last month but offered no details. Months earlier, he had said that "the governor has signaled his willingness to make changes to the program if there is a demonstrable need." Stormes said she never heard back from the governor's office.

She is moving Oct. 19. The next two protests, held Thursdays, will be her last in New Jersey. About 30 marijuana patients, parents of children who use cannabis, and supporters have attended the protests, displaying placards and handing out pamphlets to passers-bys. Jim Miller, a supporter with the Coalition for Medical Marijuana New Jersey, said he would continue the tradition of weekly protests after she moves, at least until Thanksgiving. "We will miss her. She was like the Energizer Bunny," he said. Miller said he believes the protests have been meaningful. "It's the only leverage we have," he said. "And showing up week after week is getting us some attention and support. It's opening some doors." 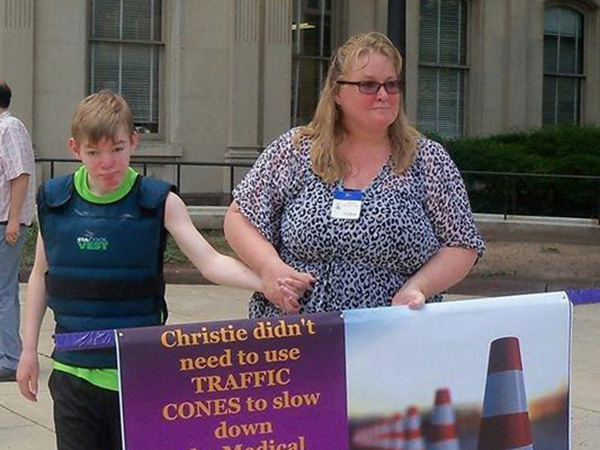