While in between calmag orders I made an emergency diy version today. I dissolved a large bottle of calcium pills in water. Added Epsom salts at 1/2 the amount of the calcium. I will probably change that ratio up a little to mimic more closely the commercial calmag.
I've read Emilya's thread on diy calmag with dissolved eggshells. Very cool, but calcium pills were close at hand, and eggs weren't.

My Botanicare calmag has 2% Nitrogen. I once read that this is necessary for it to work (?)

Anyone think this will work, or not, or have any comments? Thanks folks.

Raw organic milk is what works best. Even the old school powdered works as well. I prefer organic though.

Thanks for the reply albienieves. Tead uses milk as well for his hempy grow. I considered it, and may try it, but kind of want something I can mix and keep in a bottle. What amount do you use per gallon?
The Green Hole - my first journal- completed
The Hexapus's Garden - my second journal -completed
Weasel Forges Ahead -current
A

I use about 1 teaspoon per gallon and that's every other feeding. Mostly used only when necessary too. Raw organic milk can even be used as a fungicide and pesticide as well...

Hi Weasel, You can't really store it since it goes bad.
I Use Emilyas eggshell one store it in the fridge and I have used cal mag tablets too, but make them fresh when I want it and toss away the rest.

Ms. Bird you mean the milk can't be stored? Or are you talking about the calcium tablets I used? I wouldn't expect them to go bad (?)
The Green Hole - my first journal- completed
The Hexapus's Garden - my second journal -completed
Weasel Forges Ahead -current

Sorry for confusion, I just woke up and coffee hasn't kicked in yet.
I did make a bottle of cal mag tablets, didn't store it in the fridge and it went bad after a week or so. We had hot weather then, so that could have been the problem.

I watered the plants with the cal mag ( not the full bottle, just like a tablespoon in 1 liter.
They seem to love it.

The ones I used were just store-bought calcium tablets, sold in the vitamin section, and then mixed with Epsom salts. Were your tablets made from eggshells?
The Green Hole - my first journal- completed
The Hexapus's Garden - my second journal -completed
Weasel Forges Ahead -current

Ya know... I used milk and epsom for a long time.
I liked it. Never gave me any problems. If I left a pot laying around for a few months without cleaning it I might smell it... but really, you're using such small amounts of milk that it's just not a huge issue.
CalMag is easier and I'm super lazy. Plus, milk isn't always in our fridge.
I should keep a touch of powdered milk around just in case.
My little bottle of CalMag is about 1/2 gone... I might have to migrate back to my milk and epsom routine just to plant the idea in other people's heads.
Tead's Current Hempy SOG

Inside Tead's world - off topic

I actually tried one batch with cal and mag tablets only and then I made one batch of Emi's eggshell and added a tablet of mag in there.
I still have that bottle in the fridge and use a tablespoon in 1 liter water

albienieves said:
I use about 1 teaspoon per gallon and that's every other feeding. Mostly used only when necessary too. Raw organic milk can even be used as a fungicide and pesticide as well...

Sent from my SM-N900T using Tapatalk
Click to expand...

So, as a novice to all this I need to learn the signs of deficiencies, don't I? Or, do like Tead does and supplement all the waterings with the milk.

albienieves, how long have you been using the milk as a calcium addictive like this, going every-other watering?

What are the communal thoughts on powdered calcium carbonate? 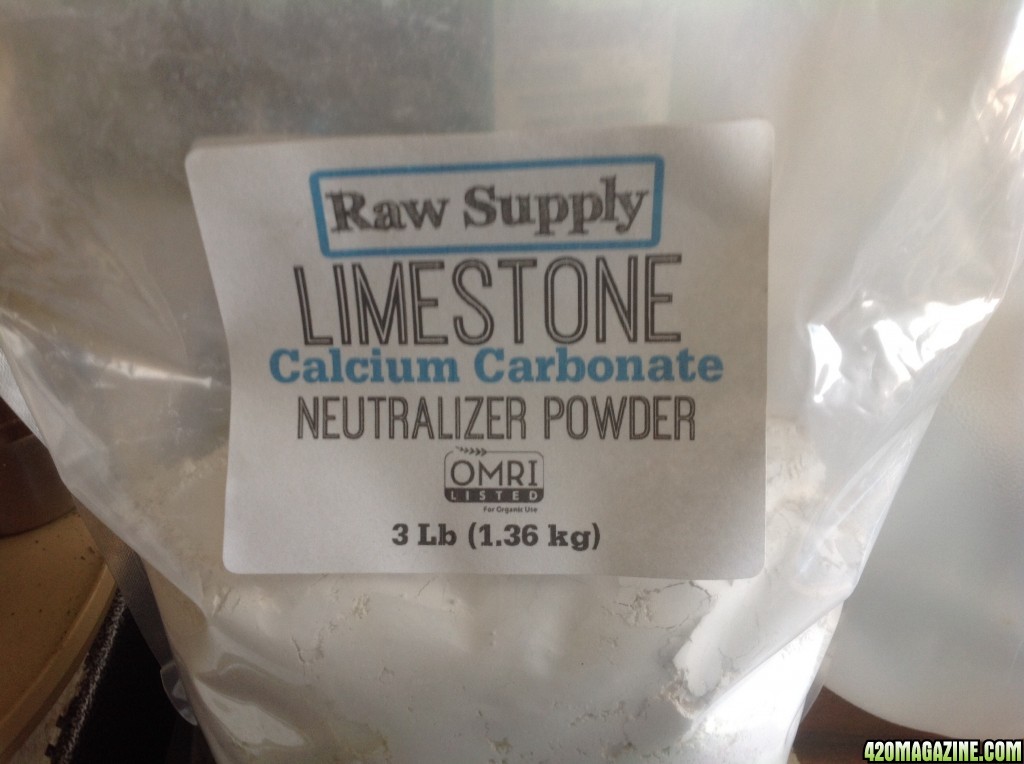 "What you think, you become. What you feel, you attract. What you imagine, you create." - Buddha
A

I only use raw organics. As for milk in question, I probably use 1 teaspoon per gallon, every 3 week's for maintenance. It helps to prevent fungus and gnats.

That calcium carbonate is awesome too, btw.

Sent from my SM-N900T using Tapatalk
A

Anyways, I started using ROM a few years ago. A friend of mine suggested it to me when I had a really bad fungus gnat problem. It actually got worse because I didn't listen to em sooner. Lolz. Anyways, one day I grew some ballz and said fuck it! I used some and a 2 days later, the gnats were gone. Not 100%, but I definitely noticed a humongous difference. A few more days after, she was on the road to recovery and with that and that alone, I totally got into organics. Ever since then, I've been really happy with everything.

And I have some Calcium Carbonate too, by the way. I like it. But, I just throw it into my soil. She's a good buffer.


Sent from my SM-N900T using Tapatalk

Calcium carbonate is what composed the tablets from the pharmacy which I ground up into my DIY mix, Sue. The bottled calmag contains calcium nitrate. Not being much of a chemist I don't know what the difference is.

I'm hoping that the plants can process the calcium in that form. I think they probably can, just haven't put much research into it yet. To know how much to use, I plan to use my EC meter to test the ppm once I mix some with water. Once I do that, if you like, I can figure out how many grams per gallon it takes to bring the ppm up to about the same level as I was using the bottled calmag at.

It's just to tide me over till the mail gets in, but I'll get some powdered milk as well.

When I was a kid growing up in the bush that's mostly all we had for milk, I'd managed to forget the existence of that horrible stuff

Hopefully you don't need to learn about all the deficiencies! It's a tricky business. Hydro growing involves managing ph, managing feeding levels, and (usually) adding calmag. That's about it. It's definitely a juggling act sometimes, but at the same time it's quite a simple concept. Always keep ph levels in line, always add calmag (probably- depending on your water source

), and feed at a gradual increase throughout the plant's life till most of the way into flowering when nute levels start to drop again.
The Green Hole - my first journal- completed
The Hexapus's Garden - my second journal -completed
Weasel Forges Ahead -current
A

They absorb calcium, surely. I have Calcium Carbonate and Epsom salt in my soil already, so when I water with what I call, My Protein Shake, which consists of Raw Organic Goats milk, Aloe Vera juice and Coconut water, the plant is getting any and all the calcium she needs. They get a shake every 3 weeks to a month. And when I water, I use tap water and seaweed extract. Ph between 6.4-6.8 and that's it. By the way, even tap water has calcium

Thanks albien. Yeah I figured limestone shouldn't pose a problem for the plants little tummies. I hear there's calcium in tap water. Many people seem to need to add calmag as well for hydro. Myself I just run on rainwater so need to add calmag every time.
The Green Hole - my first journal- completed
The Hexapus's Garden - my second journal -completed
Weasel Forges Ahead -current
A

Omg you're so lucky to collect rainwater. Here in America the cop's kill you for living off grid. Passive joke [emoji14] lolz...

I've actually thought about collecting. Just haven't gotten there yet...

I hear there's calcium in tap water.
Click to expand...

Inside Tead's world - off topic
A

Yup! And to be more honest, you don't even have to worry about chlorine either. The chlorine content isn't high enough to harm your plant's. You would need pool water to kill your plant. Regular tap water doesn't do that. Alot of growers still let their tap water sit out over night. Some, a few hour's. Personally speaking? I might let them sit out if I'm making some flowering food. I still check my Ph before and after I add my seaweed extract, or whatever I'm using that feeding.

Ok I fed my plants two days ago and used the diy calmag. Immediately afterwards there was one of those 'Doh!!!' epiphany moments. Relating, as usual (sigh) to PH.
I've used lime before many times. Usually in the regular non-420 gardens, which are organic. Lime is used to regulate the ph close to 7, as we all know. So what did I expect to happen when I used lime as a calcium source in my nute solution??? Duh, well, I guess I hadn't thought of that part...

So the nute mix kept rising in the bucket. I beat it down again with plenty of ph down, until it seemed to be stable. Considered dumping out the whole lot (four different 5 gallon buckets) but decided- nothing ventured nothing gained.
Sunshine mix does have added lime, and the total amount I added to this feeding wasn't all that much. Lime is tenacious stuff though, and hard to neutralize.
Some of the plants as of last night were showing the consequences. I've seen it before as a result of high ph- yellowing growth at the top where it's most exposed to the light. I think it's an iron deficiency. Not 100% sure about that but the operative thing is the ph. Also I can see some of the curling leaves that I've mentioned before in my journal in my ph tests. 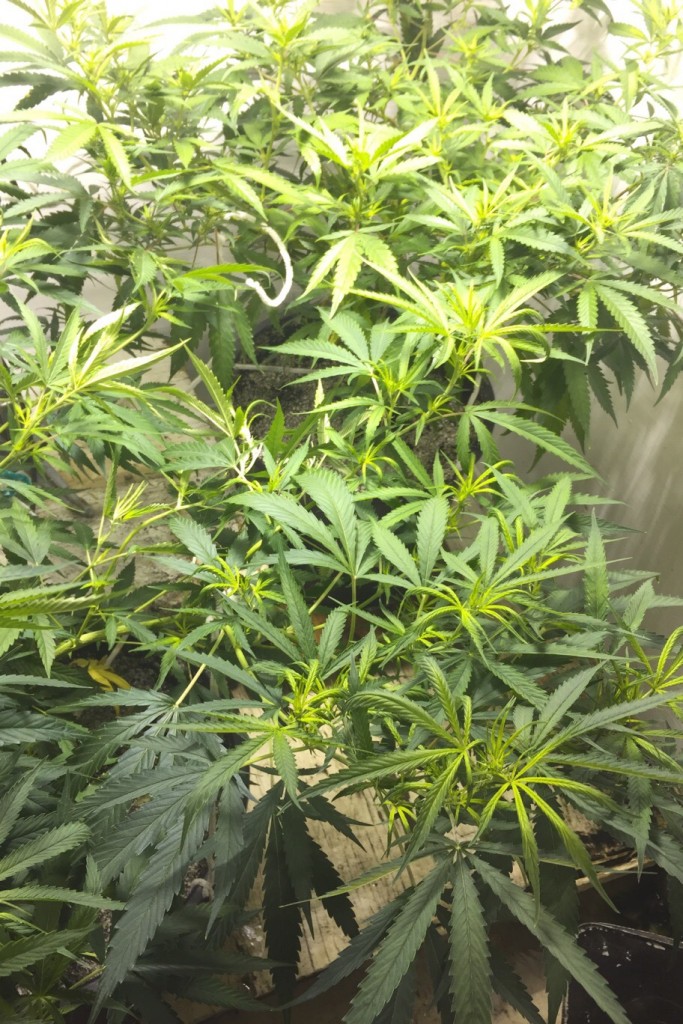 I flushed the two most affected ones and re-fed with a low ph mix and the dregs of my calmag bottle. I'll check the situation again tonight if I'm around. Not overly worried about it, every grow is a learning experience. Should have seen this one coming a mile away though.

Tead, I bought a bag of powdered skim milk. For making 'milk' it calls for mixing in about 25% powder to the water. Since you used about 1 tsp milk per gallon- I'm thinking I would use 1/4 tsp/gallon of the powder. But, you use fairly high ppm tap water while I use 0 ppm rainwater, so I should probably add extra calcium in my case.
I think it's difficult to OD with calcium, so I'll try 1/2 tsp per gallon.
The Green Hole - my first journal- completed
The Hexapus's Garden - my second journal -completed
Weasel Forges Ahead -current
You must log in or register to reply here.
Share:
Facebook Twitter Reddit Pinterest Tumblr WhatsApp Email Link
Top Bottom