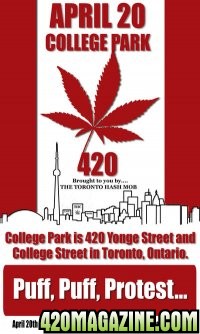 After much doobie deliberation Toronto Hash Mob have found, right in their
neighborhood no less, the perfect place to ganja gather for peaceful public
puffing and pot protesting April 20th.

They invite cannabis enthusiasts everywhere to join them in getting their
public ganja grove on in the comfy green surrounds of Yongesterdam’s
own College Park parkette at 420 Yonge St, just three block south of
Kindred Cafe.

Toronto Hash Mob’s quest to seek the centre of the universe is now
complete with the re-discovery of 420 Yonge St.

College Park is wonderfully located (420 Yonge St!) at the southern edge
of Toronto’s cannabis district Yongesterdam. The beautiful piece of urban
green has a seating circle, little hills, and nearby smog dog vendors.

On Sunday April 20th 2008, There is also the Hwy 420 Magic Bus Tour &
5th Annual Hwy 420 Cannabis Rally leaving the Kindred Cafe at 12noon
heading to Niagara Falls. Toronto Hash Mob will then light up Toronto at
1pm with much more ganja gusto, following fast on the footsteps of last
year’s very successful smoke out, with clowns, comedians, drum circles
and prizes.

More doobie details shortly.
Got an idea? Do it up.

Welcome to 420 Magazine! Thanks for sharing this information with us.

Potheads Geared Up For Tokin' Gesture

Apr 19, 2009
infoman
I
J
Canada: Cannabis Culture Blows Up In The Big Smoke