Are you a hash snob - live hash V dead hash

In recent years it is becoming more noticeable that there are hash snobs among us. Howard Marks recently spoke of this emerging phenomenon.
What is a hash snob you may well ask.
A hash snob is a smoker who will only smoke "live" hash. Hash that is harvested from the plant while it is still living. Hand rubbed hash from Nepal is an example - the Nepalese Royal Temple Balls. This type of hash is most often described as ultra-premium.
Dead hash on the other hand, is harvested from cut, dried and cured plants. Red Lebanese is a good example of this.
This is a profoundly different effect between the two styles of hash. I found this for myself while visiting Kashmir. In Kashmir I discovered "live" hash. Hash that had a sweet, fresh taste, with a soaring psychadelic high. I spent many days on Lake Nageen in a shikara, paddling around the water lillies. Ballistic hash.
Prior to that, all my experience was with "dead" hash, starting with the Turkish hash I smuggled out of Turkey.
While I am not a snob, I was wondering whether any other hash passioados have an opinion on this.

i love Hash, especially when its good quality.

I've smoked lots of 'live' hash in Manali, India, you normally get 'tollers' (10g stix) which have been 'rolled' by hand from different parts of the plant (top for grade a, lower for b etc..). the top of the flower is rolled inbetween the hands while still on the plants until the resins and oils start to form a 'stick'.

I WAS TOLD BY A FARMER IN MANALI THAT THIS TYPE OF HASH PRODUCTION HAS CAUSED CANCER IN THE HANDS AFTER YEARS OF ROLLING!!! whether this is true or not, i dont know!

Sometimes, depending on the quality of the hash stick, i would find parts of the plants stuck in the hash, Sometimes a seed!. This had a very sweet, slightly sickly smell to it. when smoked it tastes the same sickly sweet.

i find the buzz from 'live' hash to be a heavy body buzz, whereas good 'dead' hash (ice hash, bubblehash etc..) can be more of a head-type buzz

I must say though. WEED will always be number 1 :cool027:

I'm assuming the black Afghani hash I had in the mid '70s was "live" - so that's where my vote went. That stuff was the epitome of exotic to a young American, and really did the trick.

That being said, the "dead" (bubble) hash I have now is excellent, fast and effective.
Marijuana, in its natural form, is one of the safest therapeutically active substances known to man.
By any measure of rational analysis marijuana can be safely used within a supervised routine of medical care.
FRANCIS L. YOUNG, DEA Administrative Law Judge​

i prefer dead hash, call me a snob but i dont like to smoke sweat and skin cells from peoples hands

but i absolutly love the taste and smell of hash

I'm not really a hash smoker to be honest... It's pretty rare to come across it around here, when I do though, I enjoy it. I'm pretty sure most of it is 'dead' hash, so I'll have to go with that one even tho the 'WTF' was my 1st choice before I read the description, hehehe


I explicitly remember my friends and I fantasizing about the naked virgin Afghani girls running through the cannabis fields collecting the resins. :63: Thanks for waiting until now to burst my bubble.

So...I guess my vote has to be WTF since I don't remember how the Napalese Fingers - which may be the only live hash I've ever had - compared.
Marijuana, in its natural form, is one of the safest therapeutically active substances known to man.
By any measure of rational analysis marijuana can be safely used within a supervised routine of medical care.
FRANCIS L. YOUNG, DEA Administrative Law Judge​

And this is ultra-premium dead hash, courtesy of Mary420juana. 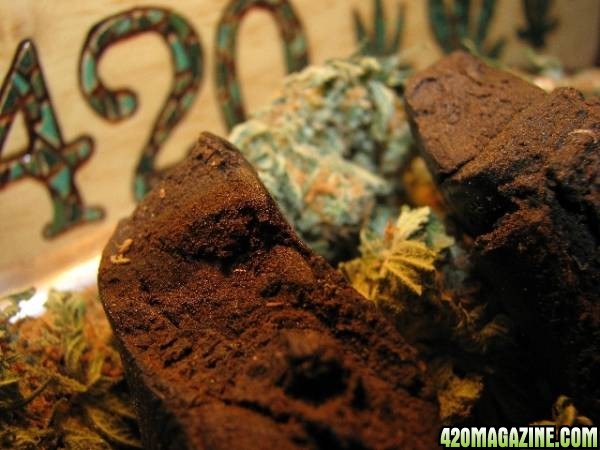 thanks moose... speaking of. i think its time to light the torch and smoke some of my hash with the kief rolled in the middle... its soooo yummmmmmy 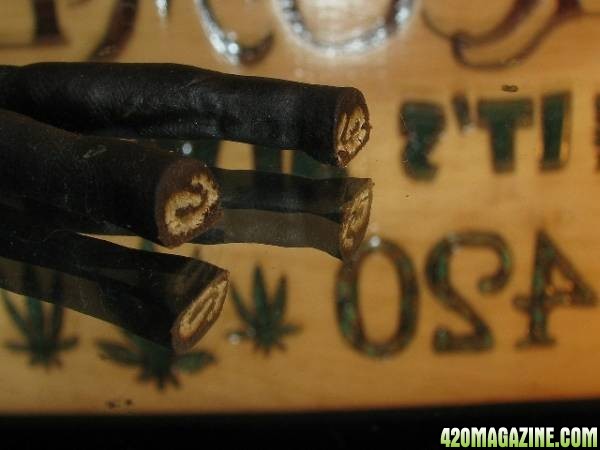 amazing....i'm sure you deserve a prize or something broski!!!

The last real hash(not homemade bubble hash no ofense anyone)I had had a black skin but a coffee color inside,and it still had the gold foil stamp form the Mafia on the bricks.It was kickass It must of been dead just due to the sheer quantity of it all.Funny story out of high school I managed a McDonalds that was a major hangout spot.So I did what any pothead wanting to spread the love would do,I had people working the counter and drivethrough selling it.If a car wanted a gr. they would ask for a big mac with black,and we would crunch a napkin around it and put it in the big mac box by itself.Man did I bank lol.
420 Magazine - News Team
Creating Cannabis Awareness Since 1993
Please Help Support Our Website!
The 420 News - Daily Marijuana News
My Hemp Art Journal

Don't be fooled by the gold foil on hash. In 1978 I was in the back area of the Grand Souk in Istanbul, watching these guys put gold leaf on 1 lb bricks of black hash. The hash was being made to look like Afghani or Indian hash, because it carried a premium price. Never judge a book by it's cover lol.

No shit thats good to know,but by the rest of the description was it live or not so live?
420 Magazine - News Team
Creating Cannabis Awareness Since 1993
Please Help Support Our Website!
The 420 News - Daily Marijuana News
My Hemp Art Journal

It was dead hash.