State health officials are facing a new legal challenge over a provision in the voter-approved Medical Marijuana Act that bars those who live within 25 miles of a dispensary from growing their own plants. The lawsuit filed in Maricopa County Superior Court contends that giving some the right to grow but not to others is a violation of the Equal Protection Clause of the U.S. Constitution. Billy B. Hayes, who is not at attorney but filed the legal papers on behalf of himself and others, also contends the system gives dispensary operators a monopoly in violation of state constitutional provisions.

Hayes, a resident of El Mirage, wants Judge Arthur Anderson to rule that all of the more than 50,000 medical marijuana patients in Arizona are eligible to grow their own plants without fear of prosecution. And recognizing the case could take months, if not longer, Hayes is asking Anderson to block state health officials from enforcing the no-grow provisions while the lawsuit is proceeding. The 2010 voter-approved Arizona Medical Marijuana Act allows those with specified medical conditions and a doctor's recommendation to obtain up to 2 1/2 ounces of the drug every two weeks. And the law required the state to set up a system of privately run but state regulated dispensaries to sell the drug. But the law also says those not within 25 miles could grow up to 12 plants of their own. Initially, that meant all marijuana patients, as there were no dispensaries when the law was approved. But state health officials, in renewing the annual permits for users, have rescinded their growing privileges when a dispensary opened nearby.

Health Director Will Humble acknowledged the law does create a disparity between those who can continue to grow their own drugs and those forced to purchase what they need from a dispensary. But he said the argument is not with him or his department, but with the people who crafted the 2010 initiative – and the voters who decided they wanted a restrictive system limiting use for medical purposes. "The voters were told that this is a dispensary-based system that has inventory controls to prevent diversion of marijuana to non-cardholders," he said. "That the program we delivered."

Humble said this lawsuit seeks to undermine that with more of a free-for-all approach. "One of the fundamental things that you lose in that kind of a system are the inventory controls that prevent diversion of marijuana to non-cardholders," he said. "When somebody's growing 12 of their own plants in their own house, they could share it with anybody, not legally," Humble continued. "But for all practical purposes, the inventory controls are lost.'

Humble said he's not a lawyer and cannot address the legal questions being raised. "But I can tell you we're going to go toe-to-toe with the plaintiffs on this case and defend the law that the voters approved," he said. This is not the first challenge to the 25-mile restriction. Last year Maricopa County Superior Court Judge Katherine Cooper rejected arguments by two men that the limit on growing marijuana violated a state constitutional provision which guarantees patients the right to decide their own health care. She also said nothing in the law forces them into any compulsory program.

But Cooper may have provided the roadmap for this lawsuit. "The 25-mile provision does appear to create two groups of Arizona Medical Marijuana Act participants based on residence," she wrote. But Cooper said the two men never raised that issue and she would not rule "in a vacuum as to its validity." No date has been set for a hearing. 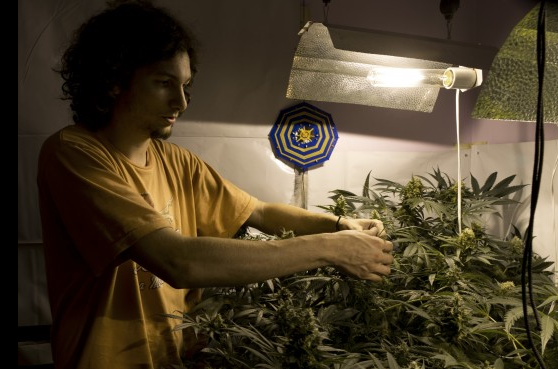 It is clear that the governor, legislature and health department of AZ has done (and continues to do) everything humanly possible to keep the MMJ program (voted into existence by AZ voters!) from serving the people of AZ.

Instead of accepting the will of its citizens, the politicians in AZ wasted taxpayer's money by fighting the new law in court (knowing they would lose, since other states had done the same thing). The governor and her attorney general claimed they could not implement a MMJ program in AZ because it was a violation of Federal law (ironically, the same peope also fought the implementation of a Federal law, "ObamaCare", tooth and nail in court and lost, too!).

The delay in licensing dispensaries (caused by the politicians' challenge and feet dragging) of a citizen mandated program necessitated the need for the Health Department to allow people to cultivate in order to comply with the new law.

This delay forced many people to invest money in indoor grow equipment to provide themselves with the medicine they need.

And now, after allowing people to grow their own for nearly 2 years, the State of AZ- has yanked the right to cultivate from people, creating a state run monopoly of dispensaries whose product costs much more than growing it yourself (especially when you already paid for the equipment to do so and especially if you're "financially challenged").

Humble's argument about losing the "...inventory controls that prevent diversion of marijuana to non-cardholders”-by allowing home cultivation is ludicrous, since what's to keep someone from buying 2 1/2 oz. every 2 weeks from a state sanctioned dispensary and selling or giving some or all to a non cardholder?!

(Humble continues to publish excerpts from outdated books that are skeptical of cannabis and the program he is supposed to administrate in the AZ MMJ monthly newsletter instead of more recent scientific studies that support the use of cannabis as medicine).

Many states that tightly control the sale of alcohol allow home brewing of a small amount of wine, beer or liquor for personal consumption.

The situation in AZ with MMJ is no different.

There is no logical reason for AZ not to give its citizens the choice of growing their own medicine or purchasing it from a dispensary as is done in many other states.

Bravo to all who fight for the right to cultivate your own medicine!
You have my support and gratitude!
J

@momzer, I agree with most of your well articulated points. Arizona, the former land of the very libertarian Goldwater, has fought the will of the people down there since the frst legalization bill was passed. However, I do agree with Will Humble that his hands are tied. The law needs to be changed by the people again. Even better the 25-Mile rule should get stricken as a violation of equal protection.

Do note that Mr. Humble is opening the door way to modifying how those 25 miles are calculated...

A dispensary just opened up within the 25 miles and now I have to purchase what I can grow on my own. It is a financial hardship because I'm on a fixed income. I am in constant cervical and lumbar pain and find relief try medical marijuana. It's just not right to ask a person on a fixed income to pay hundreds of dollars when we can grow it for free.

morsap said:
A dispensary just opened up within the 25 miles and now I have to purchase what I can grow on my own. It is a financial hardship because I'm on a fixed income. I am in constant cervical and lumbar pain and find relief try medical marijuana. It's just not right to ask a person on a fixed income to pay hundreds of dollars when we can grow it for free.
Click to expand...

Why should you have to pay for a harmless medicinal herb that you can grow yourself?

In Massachusetts, since dispensaries are not open, I can grow my own- but I must grow indoors in a locked room,
And by the way, spend hundreds of dollars on lights and electricity instead of growing by sunlight.

As a MEDICAL therapy, the laws somehow keep ignoring the fact that Marijuana is exceptionally safe and there's is nothing wrong with people being euphoric instead of in crippling pain. Since cannabis is safe, regulation is not needed.
Radogast

Just received the AZ MMJ Program Newsletter in which the Health Department's Director deemed it important to include an article outlining the possible dangers to teenagers' brains from mj use. Instead of helpful information Mr. Humble feels it is necessary to foist 1980's style propaganda on the sick patients who receive his newsletter. Shameful!

Aug 30, 2014
The General
T
T
Judge Nixes A Medical Marijuana User's Right To Grow Their Own