Started a new grow: Arjan's Haze #1. Heard so much about this one. It is said to be a "difficult" strain to grow, so hopefully I am up to the challenge! I read up on this strain and found quite a bit of info about it, and of course the GHS videos are very helpful. I prepared a batch of soil specially for pH around 5.7 with a slightly lower than usual amount of N. We'll see how they grow in that. So far, from the 5-pack, both of the two seeds I germinated have sprouted vigorously. Both seeds put out their taproots within a few days, and both taproots went through the bottom of the rooter within a few days after sprouting. Both sprouts grew so quickly they were about 3 inches high and needed room for the root, hence into a longer mesh cylinder. So far, so good. Will post more later... 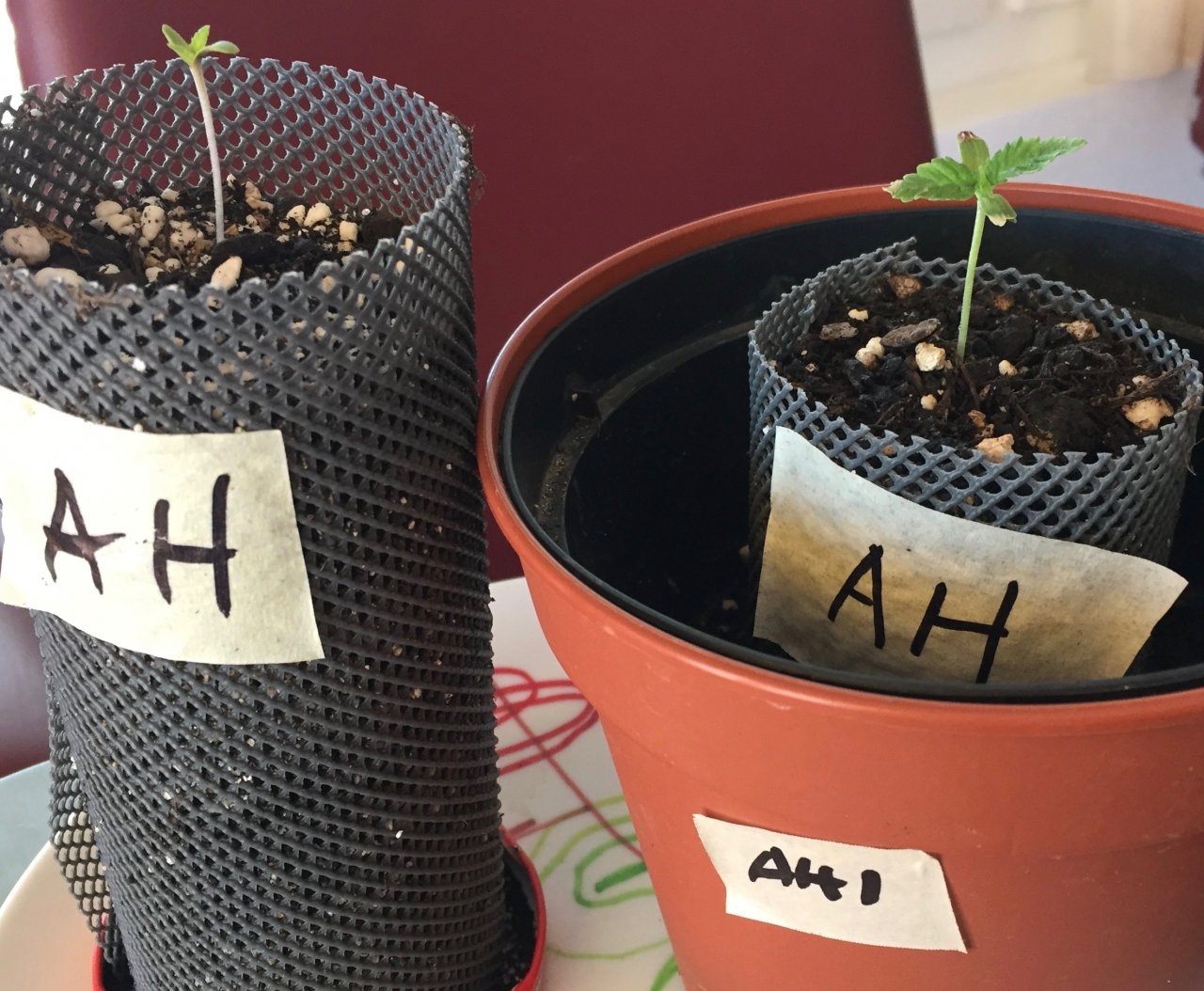 Those mesh cylinders are unusual, any reason you're using them?
If you have time, please check out my journal:

My experience was a seedling can get bogged down in solo cups or other non-poreous seedling pots because evaporation is slow, giving little oxygen to the root. Imho, the mesh works better for seedlings. Water passes right through and evaporation is much quicker. Mesh allows ample air to the roots, while the soil itself retains enough water for a short time, about one day. With mesh, the air/water cycle is shorter and quicker. Another advantage is depth. If a seedling is very vigorous, I make the cylinder deeper so the root has more room to grow. A major advantage of mesh is that it avoids risk in transplanting: the mesh is moved into a larger pot, but the risk of damaging the root is zero. The plant stays in the mesh its whole life, till harvest. I re-use the mesh for the next grow.
Journals:
Seven Hazes
Emeraldo's 2021 East-Facing Balcony Grow
Emeraldo's 2020 West-Facing Balcony Grow
Arjan's Haze #1

Wow, no offense I thought it was weird at first, but now that you explained it, that's really smart!
If you have time, please check out my journal:

Emeraldo said:
My experience was a seedling can get bogged down in solo cups or other non-poreous seedling pots because evaporation is slow, ...
Click to expand...

Great explanation! I just learned something new. I am trying autoflowers for my first grow, and then I would like to move to photoperiods and ScrOG. Once I have my environment stabalized and some solid grow experience, I plan to find out if growing 2 batches of autoflowers yields more than growing 1 photoperiod in the same amount of time and space. Also, I'm hoping to learn if there are quality differences between autoflower and photoperiods. And ... and ... and ...

TysonOG said:
Wow, no offense I thought it was weird at first, but now that you explained it, that's really smart!
Click to expand...

None taken Tyson! Yeah, it looks kinda wierd at first, I get that from a lot of folks.


SQl2kGuy said:
Great explanation! I just learned something new. I am trying autoflowers for my first grow, and then I would like to move to photoperiods and ScrOG. Once I have my environment stabalized and some solid grow experience, I plan to find out if growing 2 batches of autoflowers yields more than growing 1 photoperiod in the same amount of time and space. Also, I'm hoping to learn if there are quality differences between autoflower and photoperiods. And ... and ... and ...

Good luck with your grow and I will take a look at your other grows and see what else there is to learn ...
Click to expand...

If you want try out a mesh cylinder, I got a few yards of the stuff in a store like Home Depot. Anything stiff with holes would probably work, provided you can bend it in a cylinder shape. I set the cylinder initially on lids from jars, which catches some water and gives stability.

But there is one other technique I use with the mesh cylinder which I forgot to mention. When the root comes out the bottom of the cylinder, it is of course time to move the plant to a new pot with more soil under and around the root. At this point I will use more nutrient-rich soil with some N (very mild seedling soil is now in the cylinders photographed above). By that time the plant is usually putting out a second or third set of leaves.

So anyway in moving the plant-in-cylinder to a new pot, I would select a plastic or rubber (cuttable with a knife) pot that is wide enough to build up new soil around the cylinder but only up to about halfway to the top of the new pot. This allows for oxygen to the roots, even in a new non-poreous pot.

Also, before moving the plant in, I cut a hole in the bottom of the new pot, just three sides of a squarish hole with one side left as a hinge. It works like a door, opening up more root space for the plant at a later point. So when this new pot is getting too small for the plant in a month or so, I simply pull or cut off the "door" and set the pot with this open bottom onto good rich soil in a larger pot that will be the final destination. The roots go down through the "door" and occupy the whole space in the larger final pot.

This is the second Arjan's Haze plant today. So about two days have passed since the first photo on June 2. Looking very well, just getting used to exposure to sunlight. 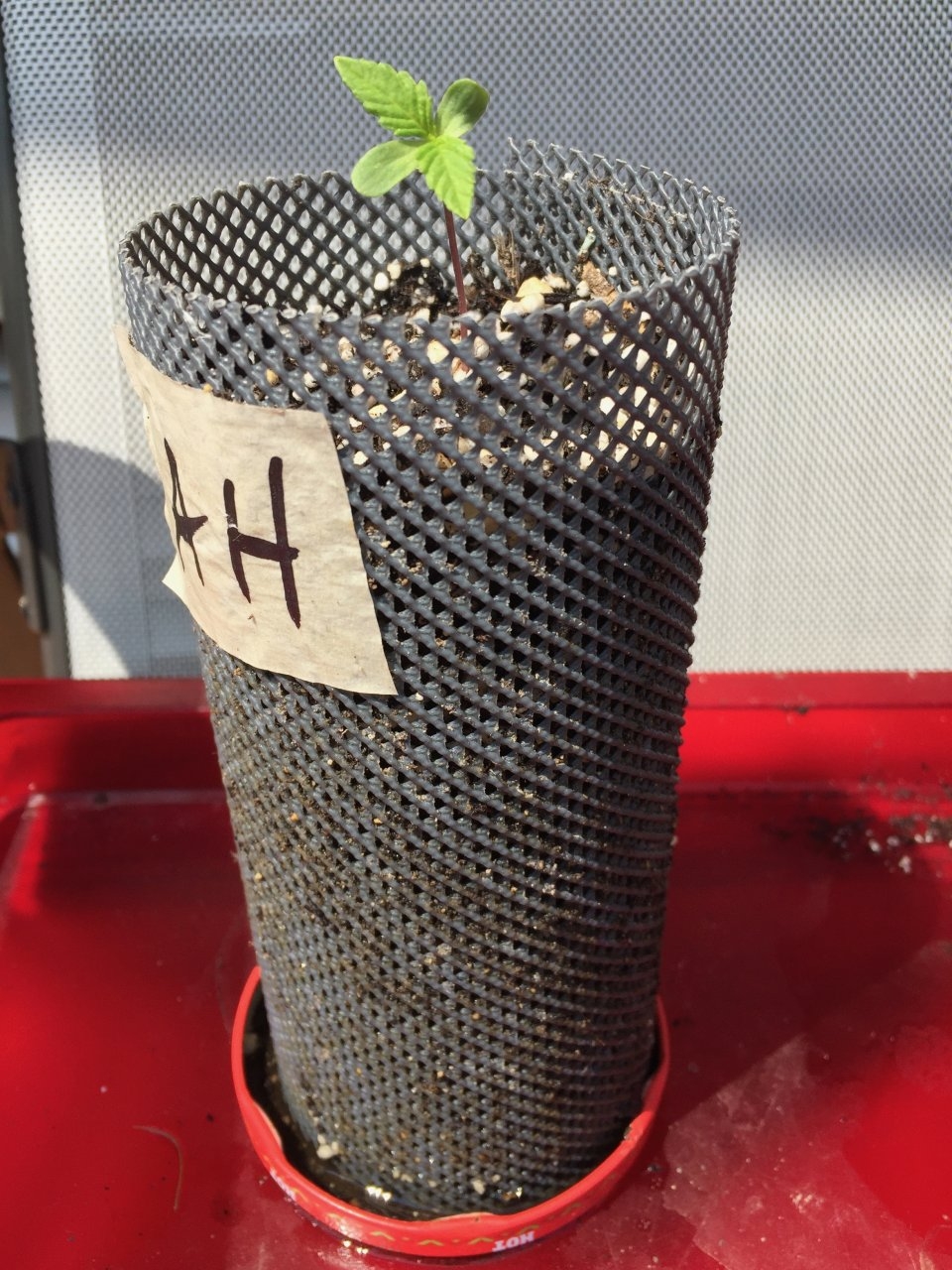 By the way, if the cylinders look conical, it's the camera lens; the cylinders are absolutely straight up and down. Cylindrical, ha-ha

Here's a Mexican Sativa seedling. The seed is either: a cross with my Mexican Sativa from last year, which grew in flowering next to a Purple Maroc (which self-pollinated), making me wonder if this will be a MS x PM cross; or it's an S-1 from the Mexican Sativa herself. Mexican Sativa is a really cheap strain to buy, but it is a wonderful strain, very balanced cerebral high. Really looking forward to this, whatever it is. 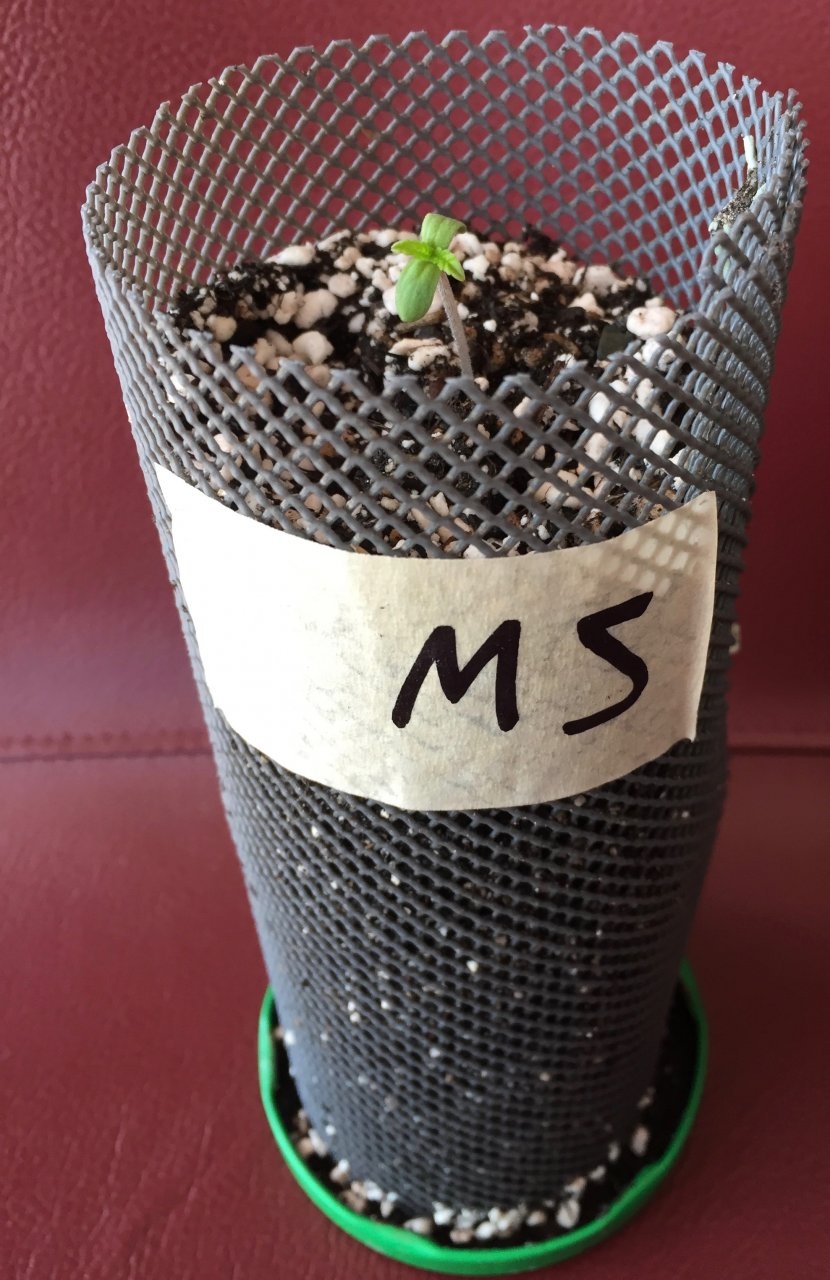 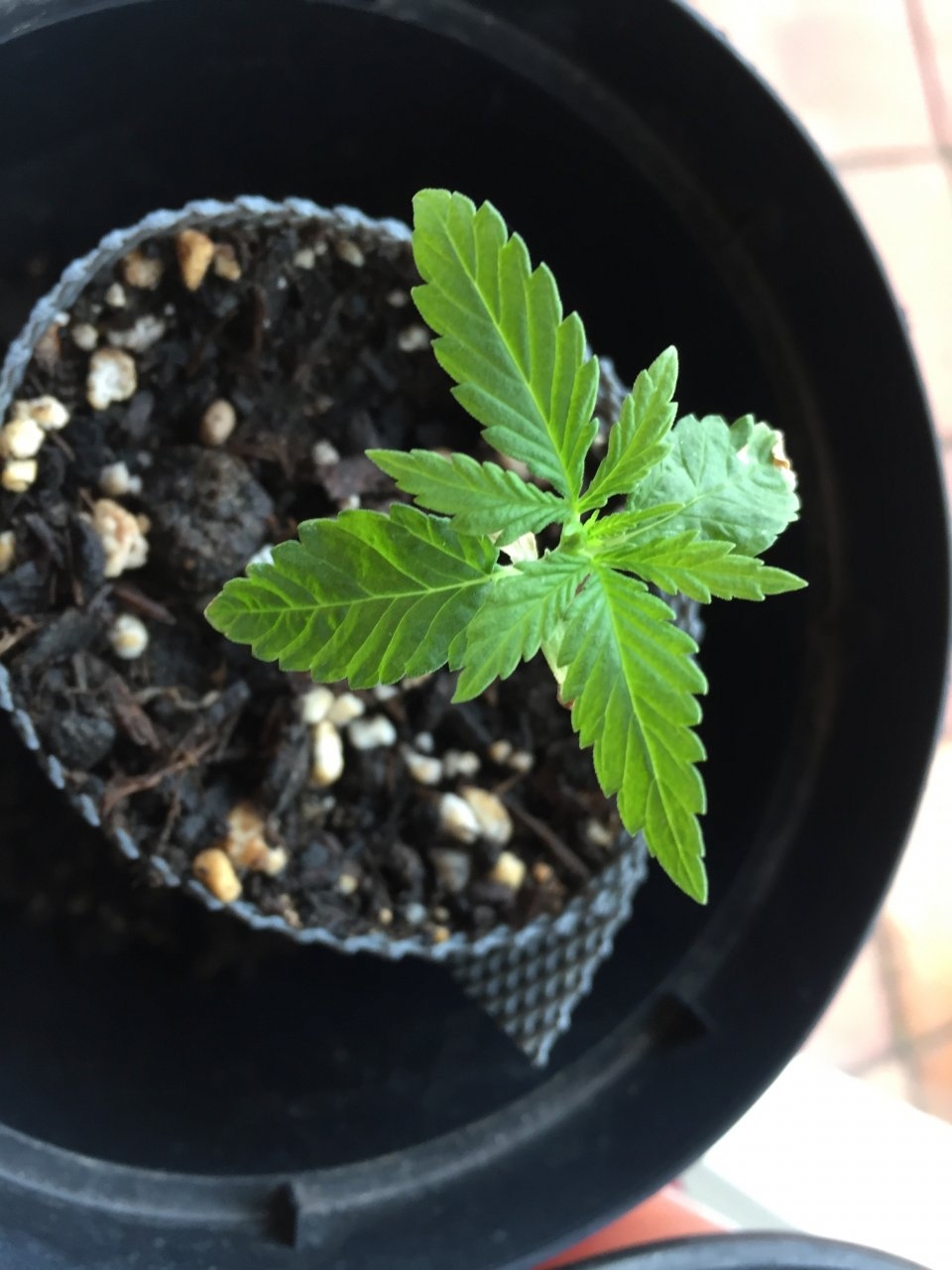 The two Arjan's Haze #1 plants couldn't be more different, optically. The first is very close to perfect symmetry, a beautiful and elegant shape. The second pheno is highly assymmetrical, which may not make the slightest difference as regards psychoactive effect or aroma. They are both from the same original GHS 5-pack. Is there a noticeable difference in quality between phenos like this? Anyone? 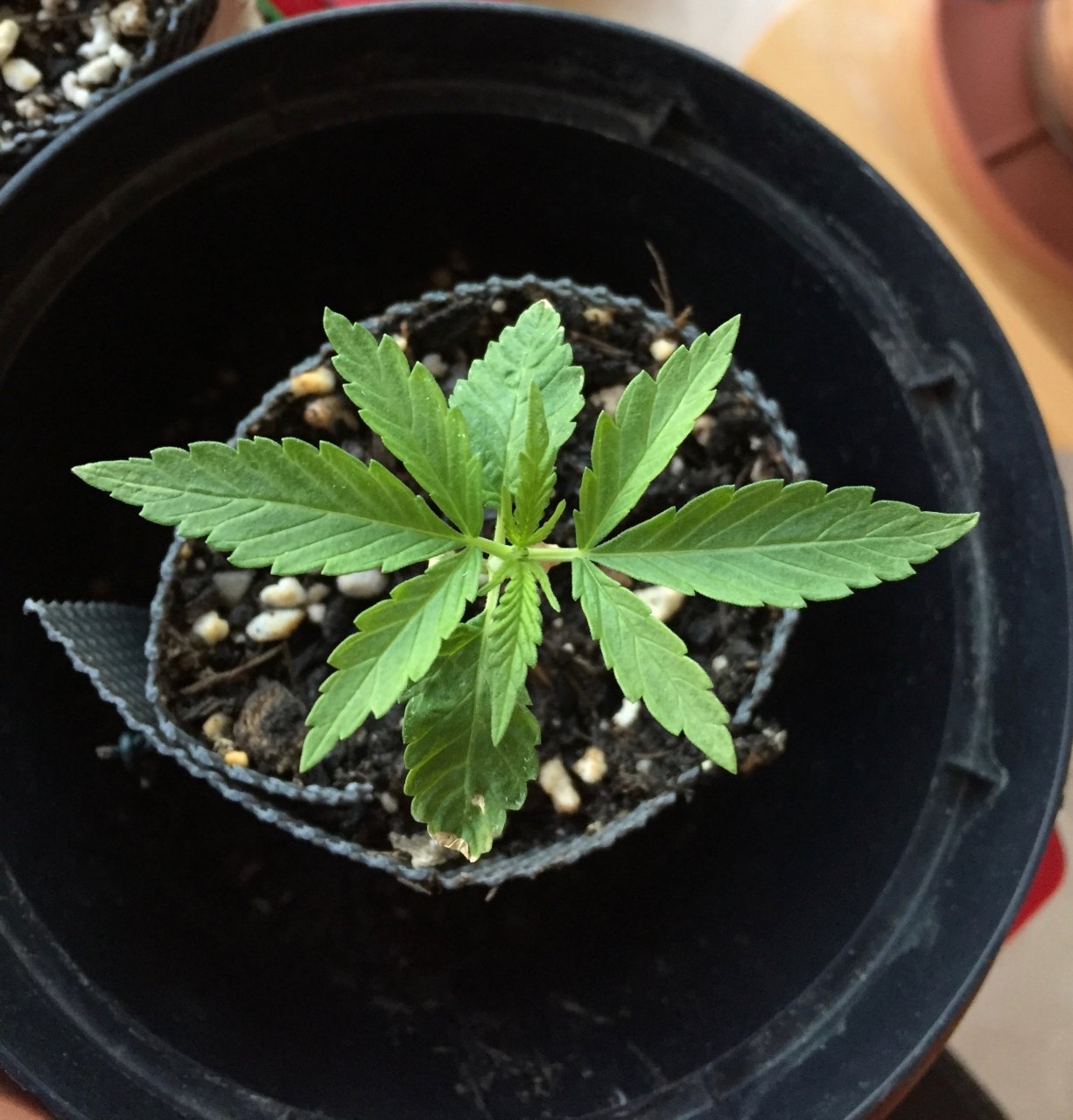 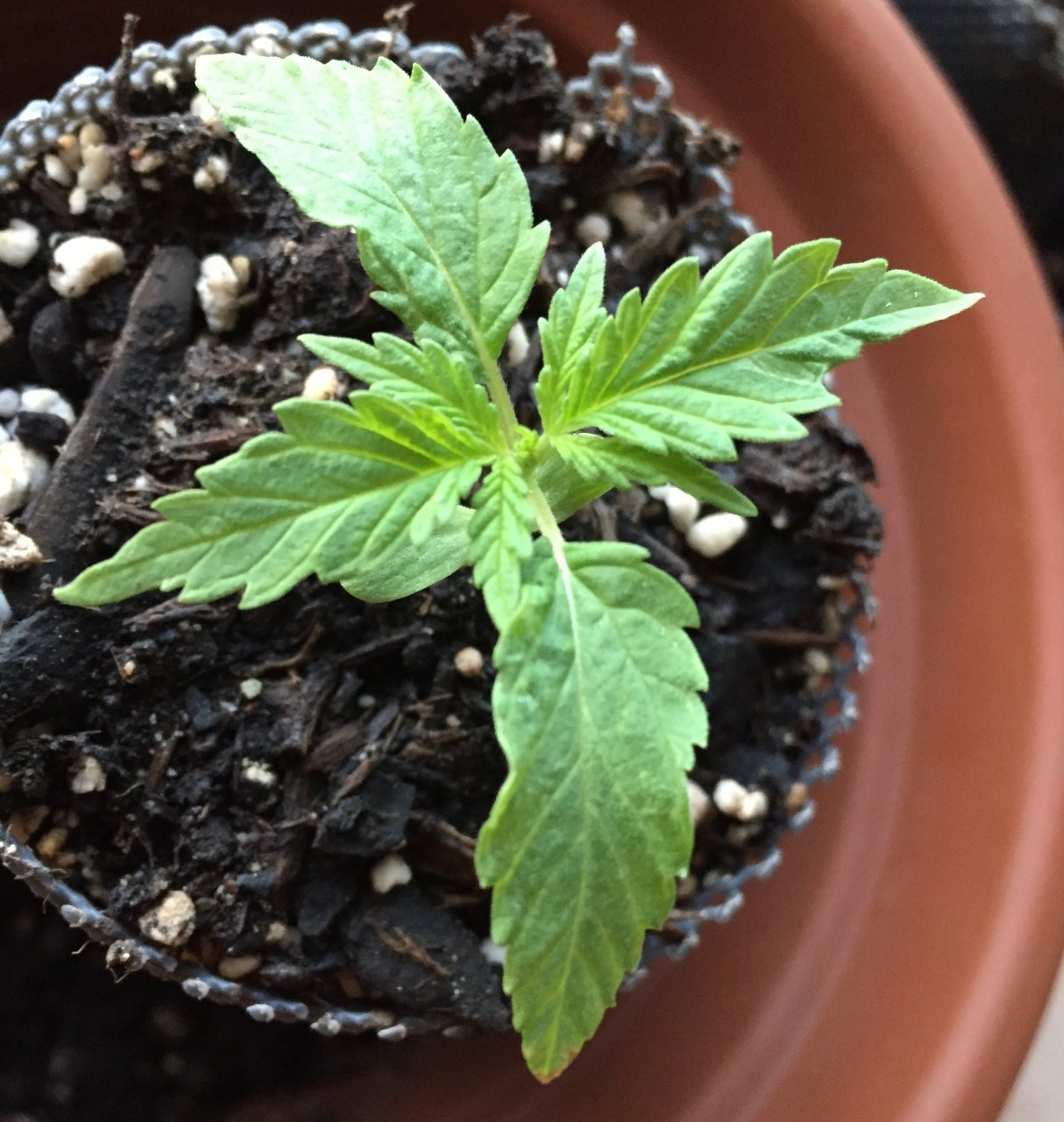 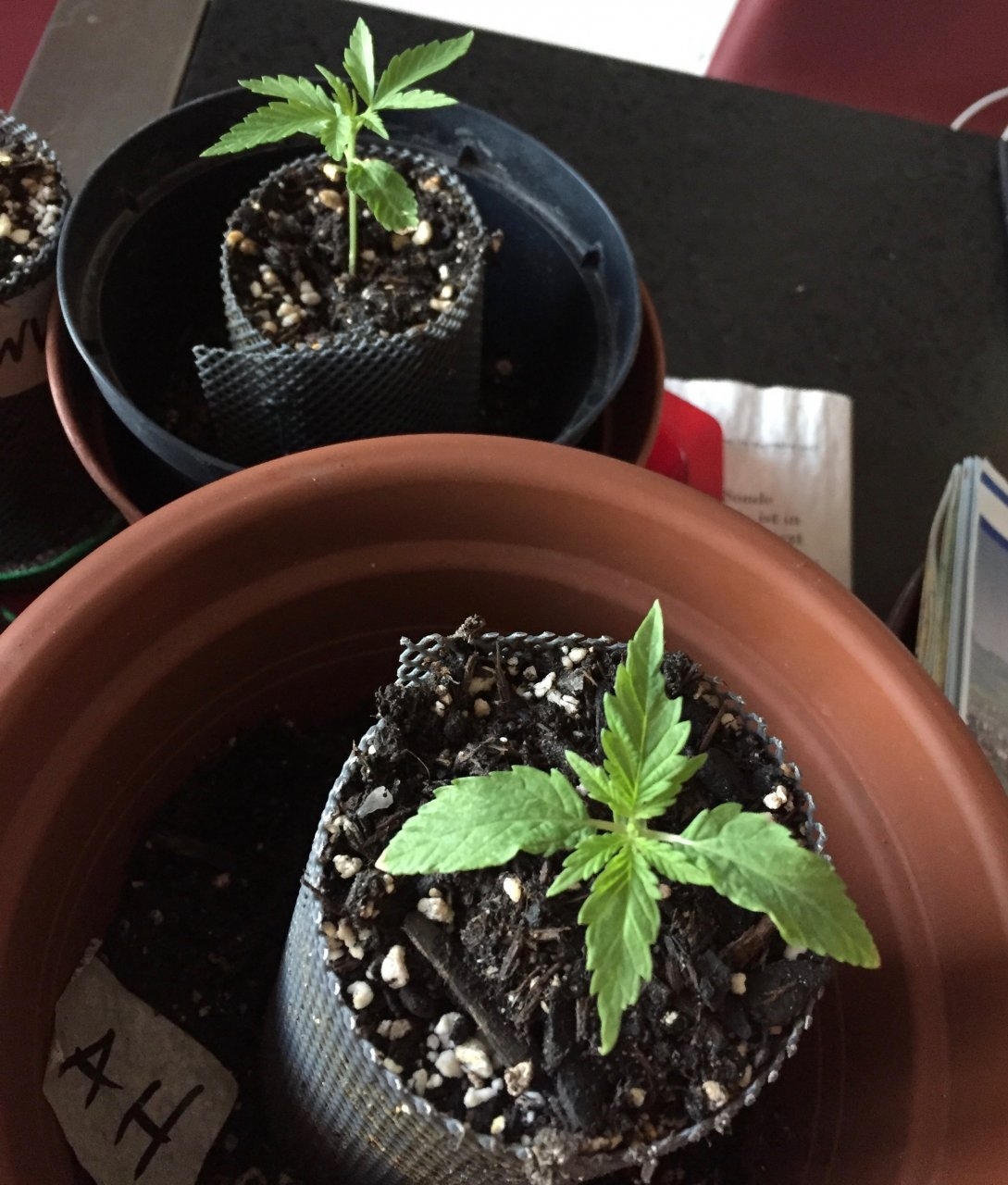 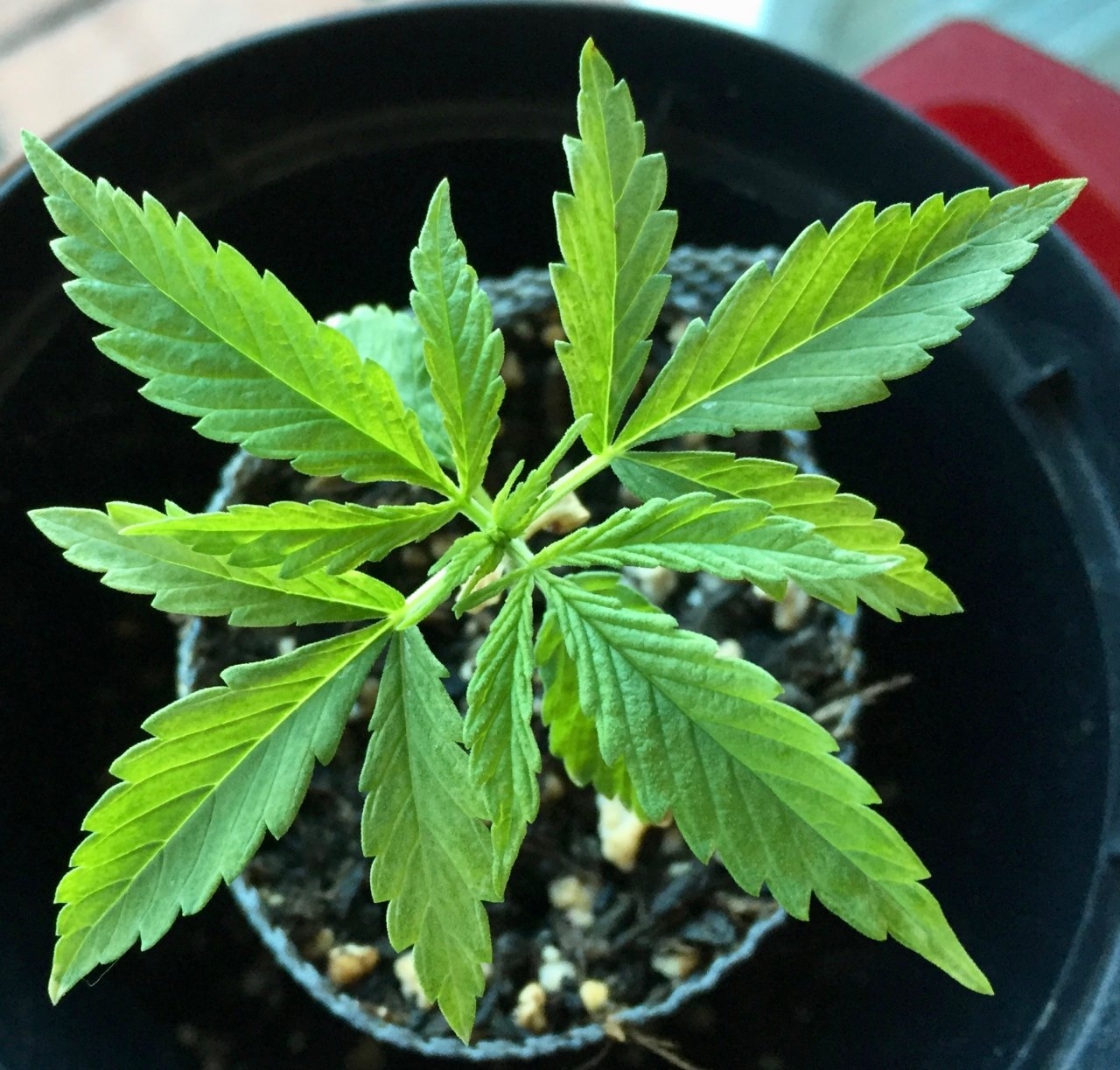 My Arjan's Haze #1 is only about 5 inches out of the rooter and already has a pretty strong aroma for a seedling! Smells like good weed. This is only for the symmetrical "pheno 1". I haven't had a seedling that smelled so strongly, ever.
Journals:
Seven Hazes
Emeraldo's 2021 East-Facing Balcony Grow
Emeraldo's 2020 West-Facing Balcony Grow
Arjan's Haze #1

I've herd a lot of good things about Arjan, some I'm sure are true. lol

I like your idea about the mesh for the seedlings.

The up-pot thing I'm not sure about.

All my containers no matter what size they are get filled completely with roots. I think the idea of a root doorway is interesting and certainly creative. Not sure that it's better than just up-potting to a larger container.

Here's my reasoning. Say you run your plant in that container with btm door, 30-45 days or until she's mature (off setting leaves alternating). That pot will by that time be full of roots. It's very easy to loosen the root ball away from the container. It will pull out intact and into a new larger pot with very little or no stress on the plant.

My experience is that the plants are actually very happy to be in a larger container and respond that way. I usually up-pot to final pot and go right into flower.

Either way works I'm sure.

GL with this grow.

The mesh is good for the seedling stage. My own experience was a solo cup doesn't breathe, oxygen doesn't get in, water doesn't evaporate quickly enough, and the seedling can get bogged down.

This was my solution for that. Oxygen gets in, waters rolls right through. You have to water more often than with a non-poreous pot, but that's ok. It's actually kind of hard to overwater.

I agree that any advantage iro transplanting is a side-benefit at most. I've damaged a few roots in transplanting, but usually that isn't an issue. Nevertheless, I've heard that tiny lateral roots can suffer. Overall I've had the same experience you describe with up-potting, the plants really take off into flowering.

So, now to your soil question. I mixed 3 tubs of veg soil (of increasing strength) and 1 tub of flowering. See the screen shot. This way I can adjust the nutrient strength up or down over the grow, mix n match. The third V tub is really hot superstuff, I'll give a tablespoon of that to the other herbs too. I also mixed some seedling soil from alfalfa and some mild nutrients, which is what the plants are in now. For the plants now in mesh in a pot, there is a dab of Tub 1 in the bottom, so when the taproot gets down there, the plant will find some N (not much in Tub 1, but Arjan's Haze #1 is supposed to like it light).

When they are ready for the final pot (15 gal), I will put down a layer of flowering soil from Tub 4 first, then some mix of tubs 1 and 2 for the rest. Then, at the start of flowering and later on during flowering, I'll top dress from Tub 4. 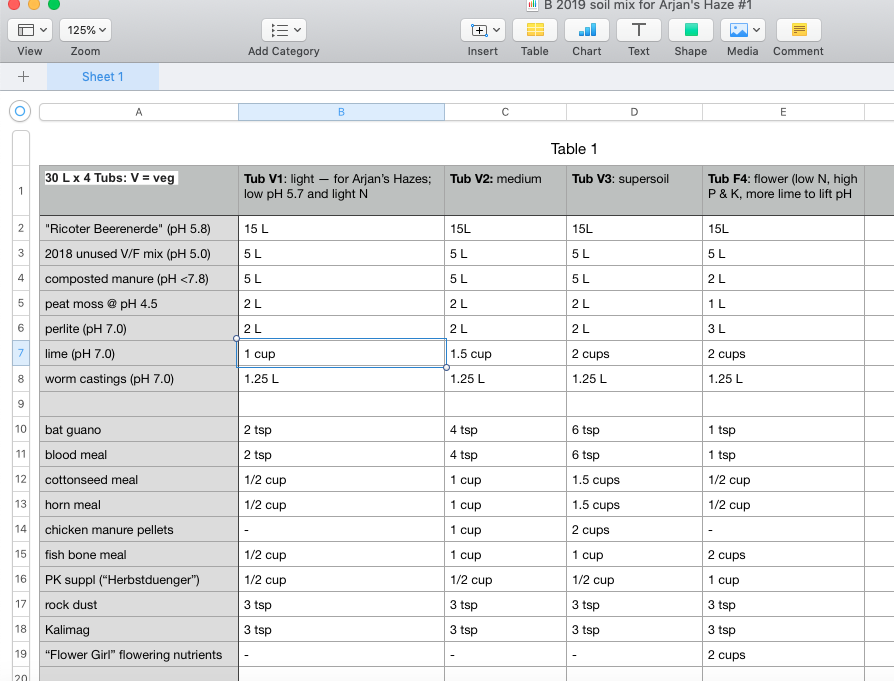 Emeraldo said:
My Arjan's Haze #1 is only about 5 inches out of the rooter and already has a pretty strong aroma for a seedling! Smells like good weed. This is only for the symmetrical "pheno 1". I haven't had a seedling that smelled so strongly, ever.
Click to expand... 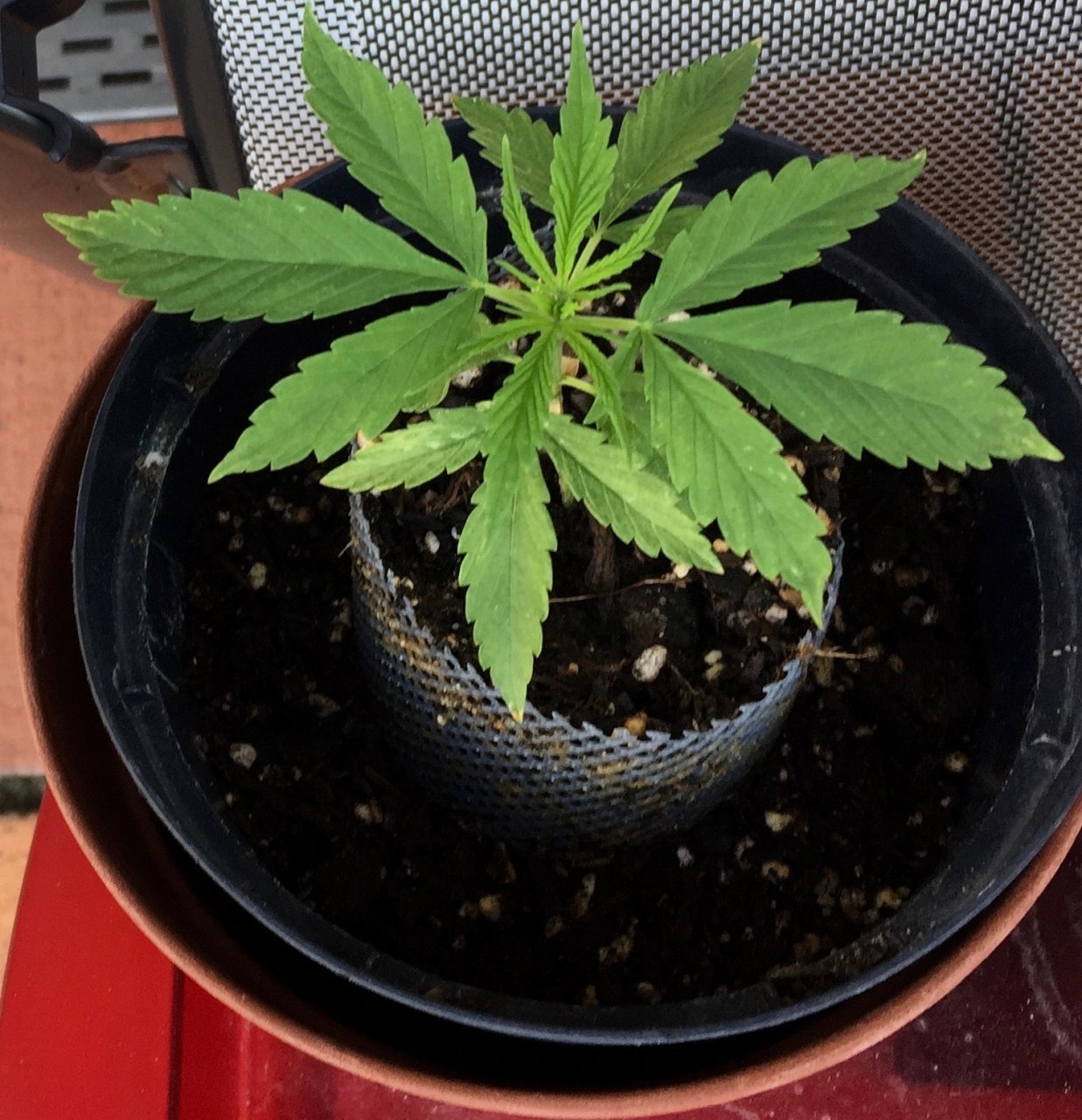 The more vigorous Arjan's Haze #1 has kicked into rapid vegetative growth, now at 4 nodes. The less vigorous and kinda freaky looking Arjan's Haze #1 has also perked up and kicked into veg (I'll post a photo of that one soon). The Jack Herer was having a heat-stress or N-stress related problem, resulting in cupping or canoe-ing of the first two sets of leaves. Glad to see she has snapped out of that funk, looking very nice now. Last, there is also a RQS Critical fem in the grow, and the two-week old newcomer is Arjan's Strawberry Haze. 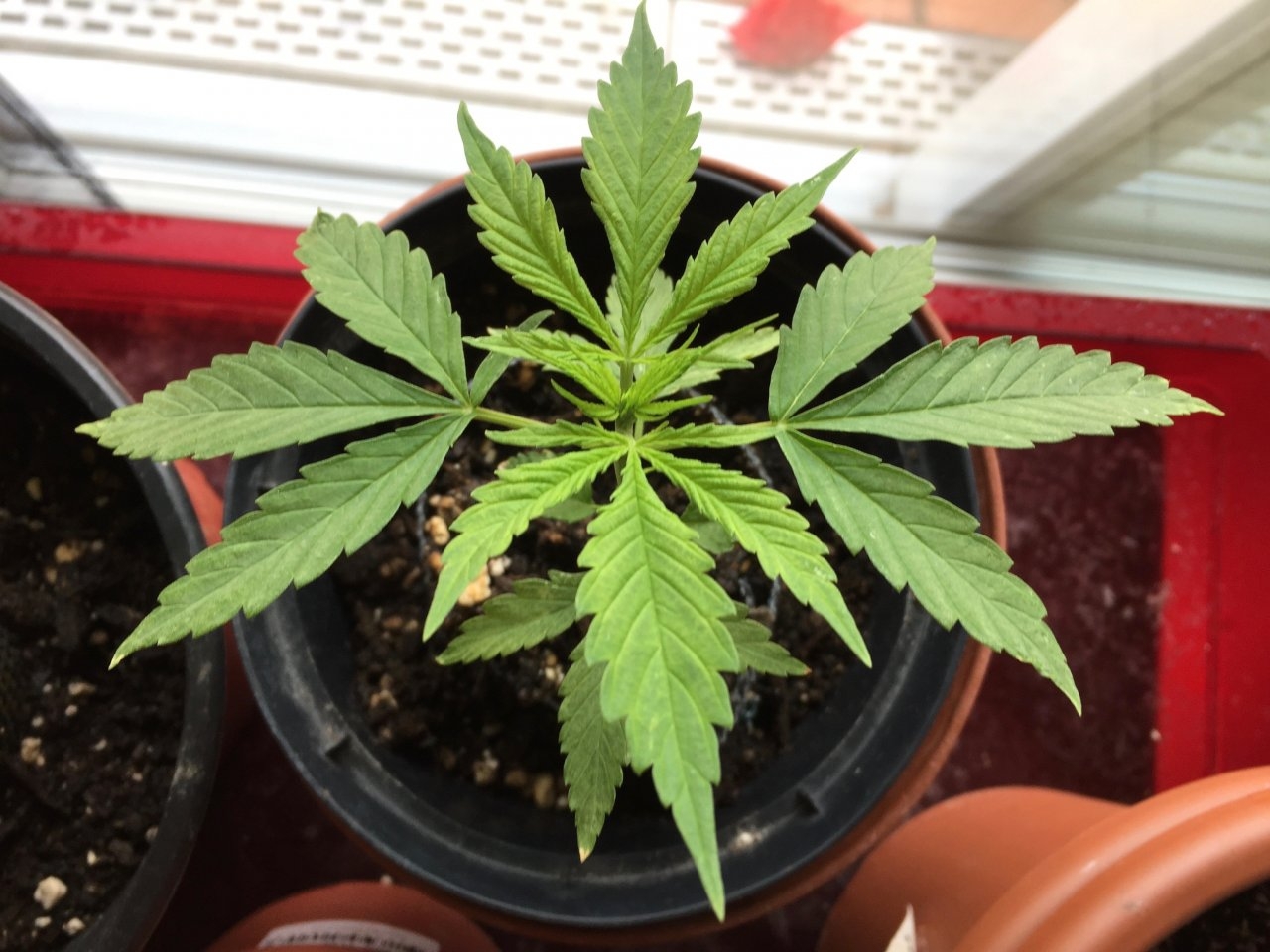 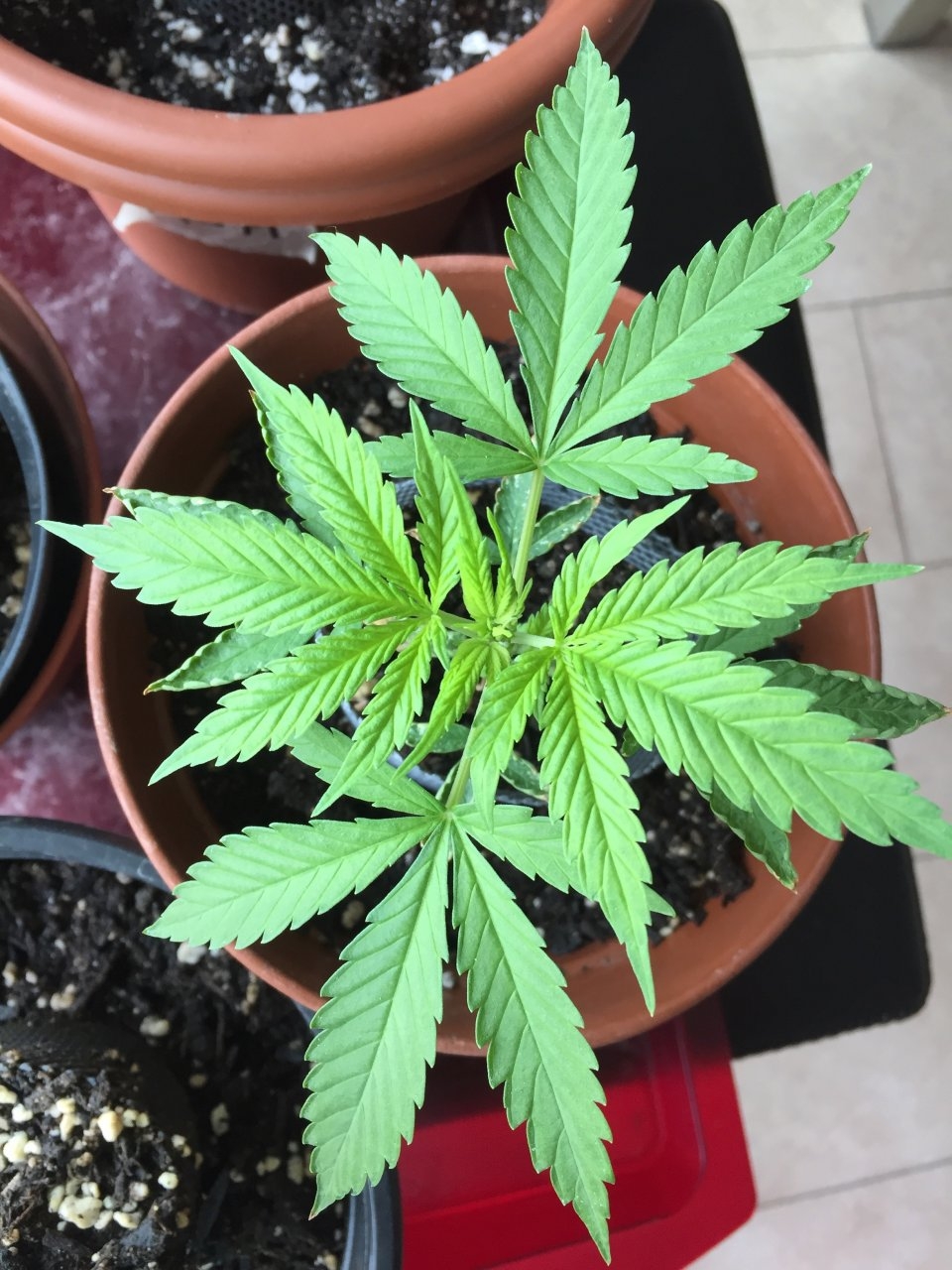 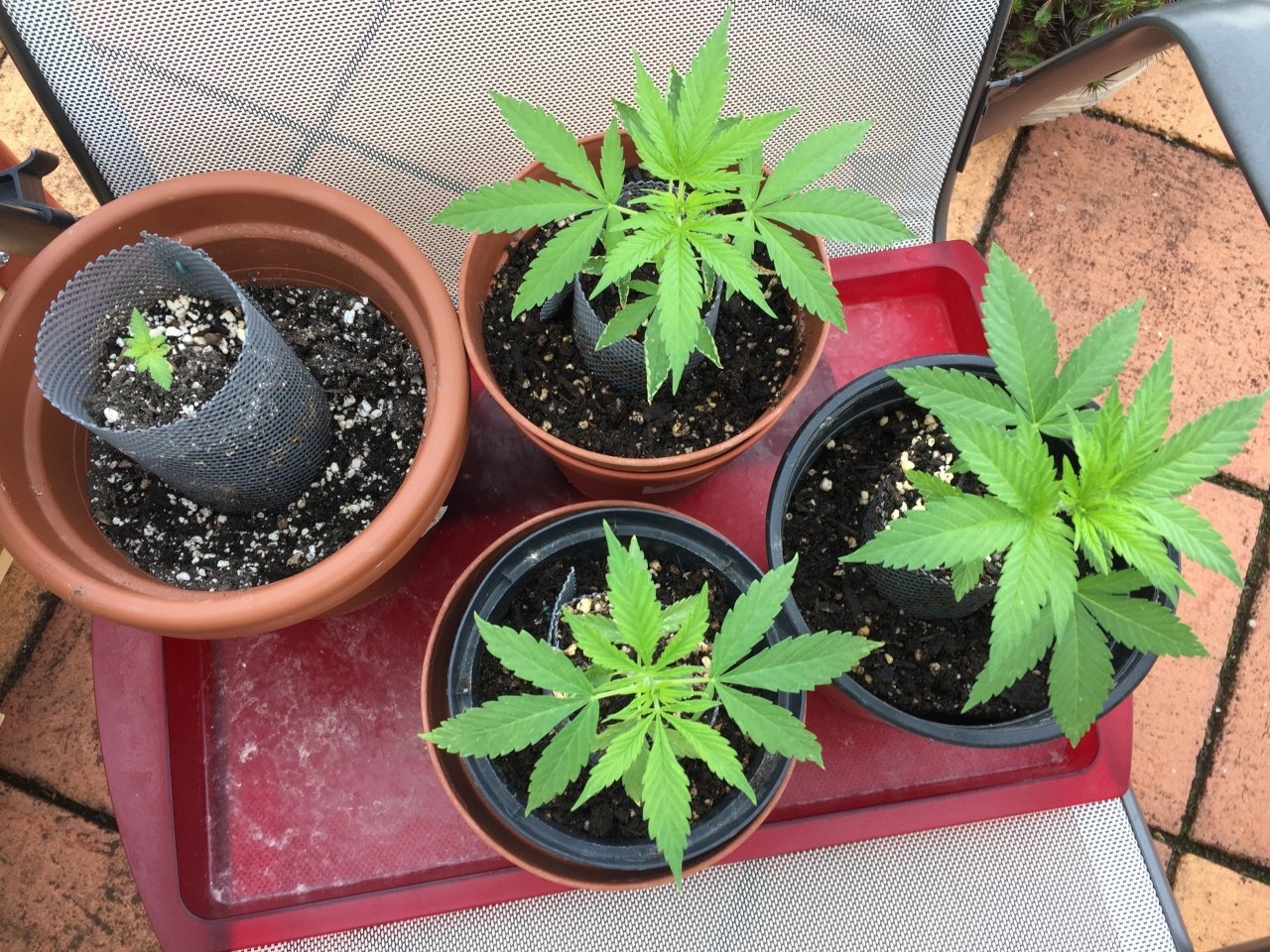 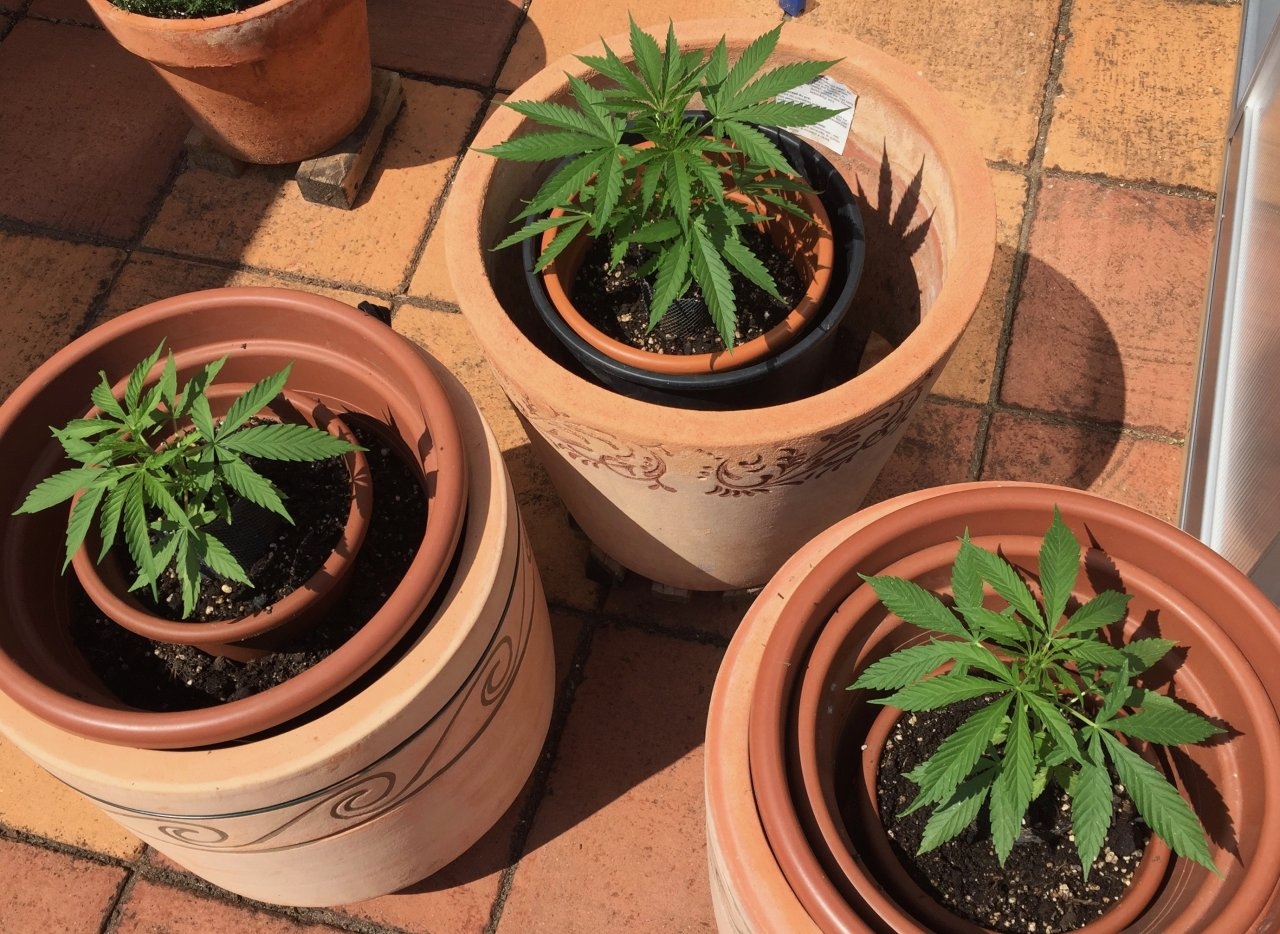 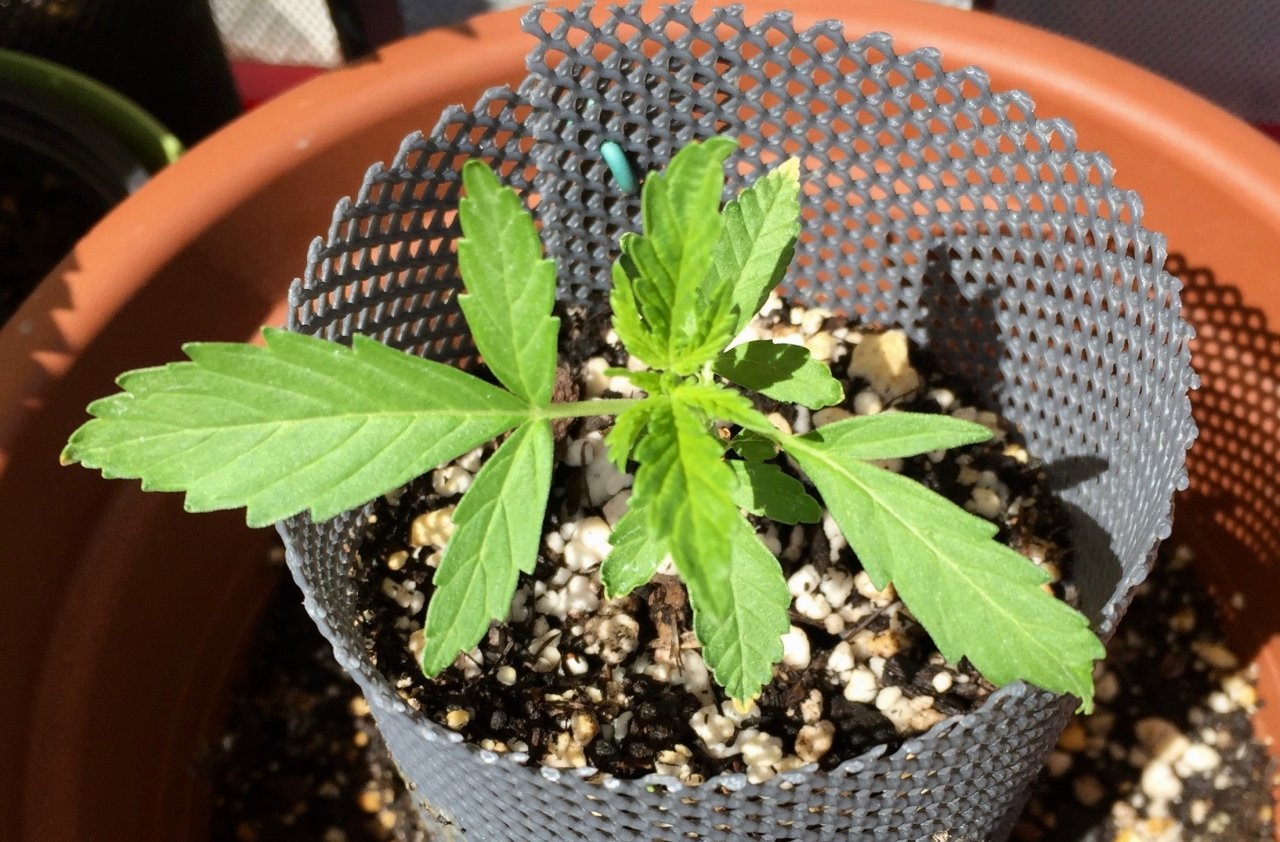 Getting going - that last one still looks a little wonky. Looking like a 3rd set of leaves on the 2nd node - cant tell yet.

Mutants, some of the best weed yet.