King County detectives are looking for a pair of armed robbers who held up a Shoreline medical marijuana dispensary over the weekend.

The robbery happened on Saturday at about 8:30 p.m. at the Seashore Collective in the 17500 block of 15th Ave. NE, according to the King County sheriff's office.

As soon as the robbers walked into the business, one of them pulled out a black handgun and demanded money and marijuana. After taking what they wanted, the robbers left in a stolen car, according to deputies. Police later found the car about a mile away from the dispensary.

One of the robbers is believed to be roughly 30-years old. He stands 6-feet tall, weighs 175 pounds and has a medium build. He has black hair, a goatee and sideburns and was wearing a black Kangol hat, a black and grey Harley Davidson jacket with black leather sleeves and dark deans. He was also wearing black boots and white rubber gloves.

The second man is approximately 25-years old, stands 5'6" tall, weighs roughly 145 pounds and has a thin build. He has a shaved head and was clean shaven. At the time of the robbery, he was wearing a black hoodie with red and white lettering on the front, blue jeans and white tennis shoes. 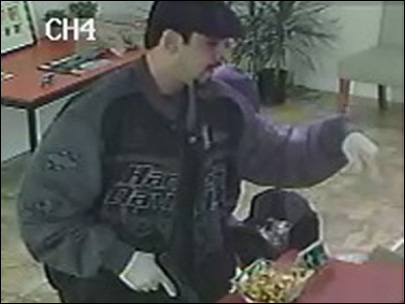