San Diego District Attorney Bonnie Dumanis and her 'fierce fight' against medical marijuana patients suffered another devastating defeat this week. Advocates from the local chapter of Americans for Safe Access (SDASA), the nation's largest advocacy group promoting safe and legal access to cannabis for therapeutic use and research, successfully obtained an order from the courts for the release of five large impounded medical cannabis plants.

The judge ordered the plants released to a representative of SDASA for their safe keeping.

On Wednesday afternoon of this week, Marcus Boyd of SDASA retrieved the plants from San Diego County Sheriff's evidence locker. 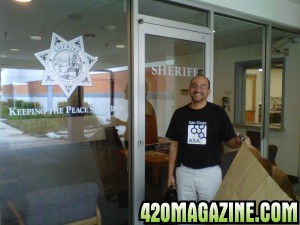 The patient, to whom the plants belong, remains in custody for cultivating them despite all the charges in his case being dropped, and will receive his plants upon release.

On September 2, John Palmer, a resident of Imperial Beach was arrested by Detective Michael Thomas Neumann and other members of the San Diego Sheriff's Department during a 'routine' probation search. Following the search and the discovery of the plants, Palmer was charged with possession, possession for sale, and cultivation of marijuana.

At the time of the search Palmer was in full compliance with state law, in fact, deputies found Palmer's state issued Medical Marijuana Identification Card as well as another patients' doctor's recommendation posted on the wall next to the grow.

During the search, Palmer explained to deputies that he was lawfully and collectively growing the medicine, as approved by the Probation Department. He explained that three weeks earlier he was granted a court order from a judge specifically allowing him to grow marijuana while on probation.

Detective Neumann not being aware of the law, called the infamous local medical marijuana eradicator and 'expert' cultivator, Detective Steve Reed, to find out if Palmer could be charged with cultivation and possession for sale. Detective Reed said, "medical pot? Ha! Book-em and charge-em!"

Deputies arrested Palmer, impounded the plants and incarcerated him in the Vista jail where he remains today and is scheduled to be released on Monday October 25, 2010.

The other patient who was collectively cultivating the plants with Palmer and whose collective grow was confiscated during Palmer's arrest was not arrested himself. After learning of Palmer's arrest he was able to quickly make contact with Marcus Boyd of SDASA in search of assistance.

During the court process, the prosecutor was insistent upon keeping Palmer in custody, despite being told by the Judge that Palmer would likely be found not guilty if the case went to trial. The Judge urged that a plea bargain be worked out.

All plea offers from the prosecutor were unreasonable and therefore unacceptable to Palmer. A plea deal was not reached and a trial date was set for November 10th.

On October 6th, Palmer was back in court for an evidentiary / readiness hearing. That day, after reviewing the motions filed by the public defender, the prosecutor moved to drop all marijuana related charges against Mr. Palmer.

At a prior hearing however, the judge ruled that the prosecutor had provided sufficient evidence to violate Palmer's probation status remanding him into custody for another 20 days.

Surprisingly, the prosecutor did not argue, stipulated to the request, and the court did not hesitate in granting the motion.

John Palmer left the courtroom in good spirits and was very happy to have won his case. He yelled "thank you" while deputies escorted him out of court.

Yesterday morning with the court order in hand, Marcus Boyd and Eugene Davidovich of SDASA, went to the San Diego County Sheriff's evidence room and picked up the plants with no delay or resistance from Detective Neumann or any other law enforcement officials.

In fact when Boyd called Detective Neumann and asked him to fax over a release of the property form to the evidence locker, Neumann replied "I don't have a problem with it and I won't stand in the way. I'll send them whatever they need this morning."

When Boyd and Davidovich arrived to retrieve the property, it was found that all the plants had been clipped at the stem right above the roots. In fact the day they were confiscated, Detective Neuman, instead of transporting them and taking care of the property as required by procedure, simply cut them and stuffed them in a large paper bag, ensuring that they could not be usable when and if they were ever retrieved. 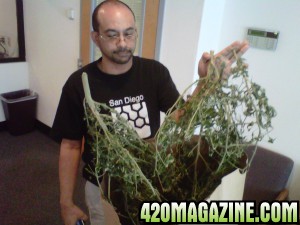 The plants were immediately rushed to Kim Twolan, the founder of Mother Earth Co-op located in Mission Hills. Twolan, who is also a SDASA Advisory Board member and serves on San Diego City's Medical Marijuana Task Force after thorough examination and several attempts to revive the plants, pronounced them dead upon arrival.

Palmer intends to file a claim for the damaged property upon being released from custody on Monday.

SDASA member and local criminal defense attorney Melissa Bobrow has agreed to help Palmer with the property damage claim against the county. 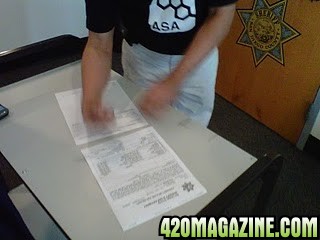 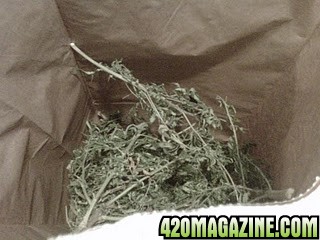 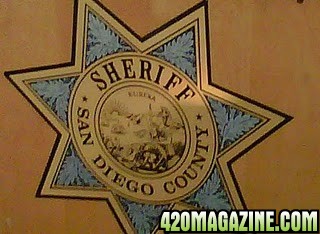 See this happen all the time. Some friends were busted a couple years ago even though they were completely legal in California. Cops cut down all their plants even though they were eventually found not guilty. A year of their life gone for no reason. They always do it right before harvest too.
4

Wow, what a leniant justice system y'all have in CA...If he were here in GA with just one plant, he would most likely spend 20 yrs in prison without them even blinking an eye...sorry, not feeling too bad about his plants when he is lucky to just be free.

More plants can be grown but, human lives are gone forever when cut down...just my openion