Calling all Northern Lights and White Rhino Growers Out there!

I purchased some seeds off the internet from one of the well known "Dutch" seed stores a few months ago. Had some problems with the seeds and most of them failed to germinate. We suspected that they were hit with an X-Ray or Microwave blast in transit that killed the majority of them off. The company gave me a full refund, but rather than toss the remaining seeds in the trash, I planted them into pots and waited to see what would happen.

I kept them sorted into the two strains I had ordered. White Rhino and Northern Lights. I was very careful to keep them separated and labled so I would know which strain was which if they germinated and sprouted.

I got about 6 seedlings out of the 12 seeds I had planted. According to my careful labeling, ALL the seedlings were from the Northern Lights seeds. None of the White Rhino seeds ever germinated at all.

However... As these seedlings began to grow into young plants, I started to notice a very obvious physical difference between one group and another.

Please have a look at these photos and let me know what strain these look like. Remember that all of these were grown from seeds labeled Northern Lights. I am assuming that at least one of these plants is a NL plant, and the other are White Rhino. Having never grown either one myself, I have no idea what either looks like at this stage of development. 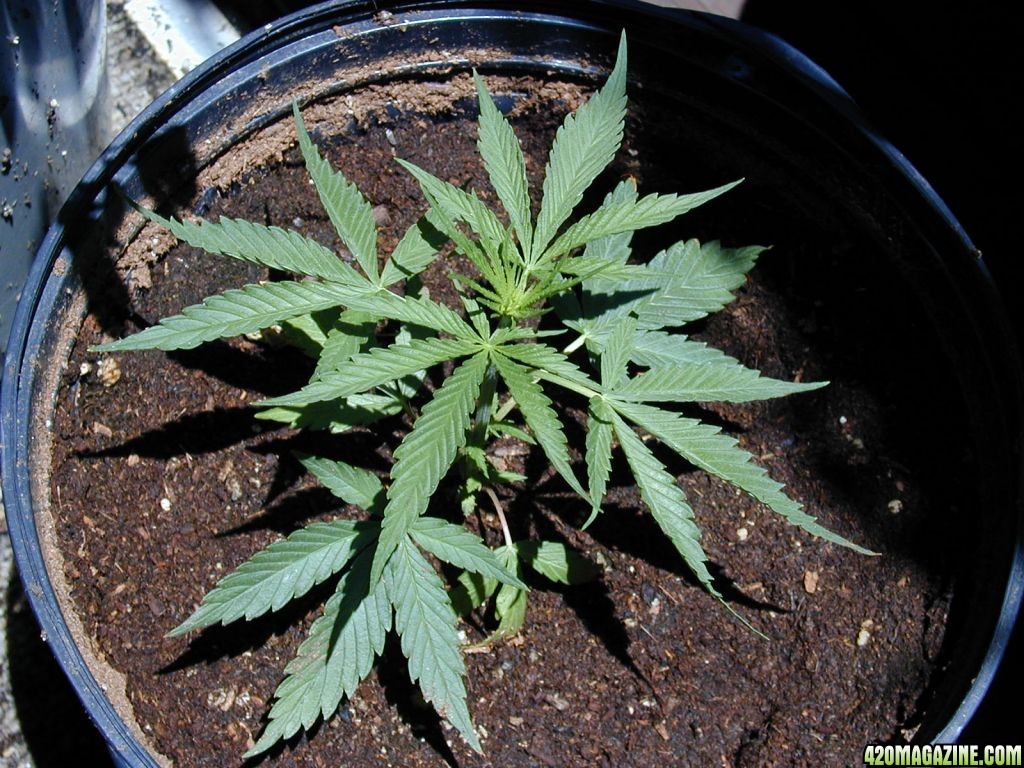 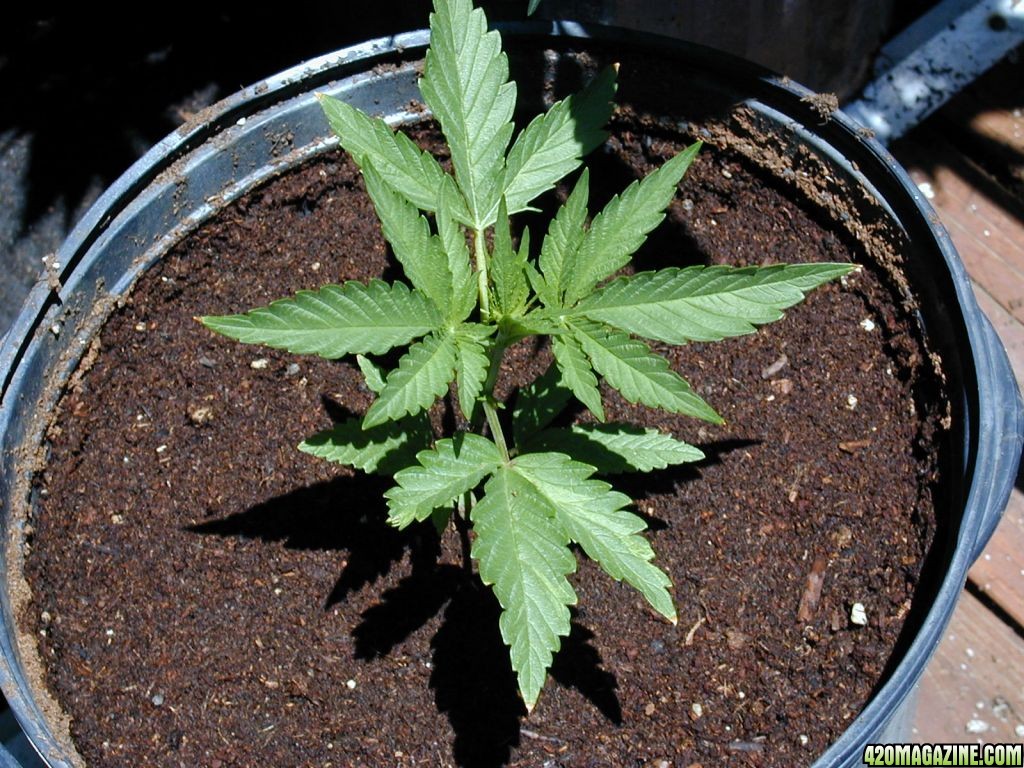 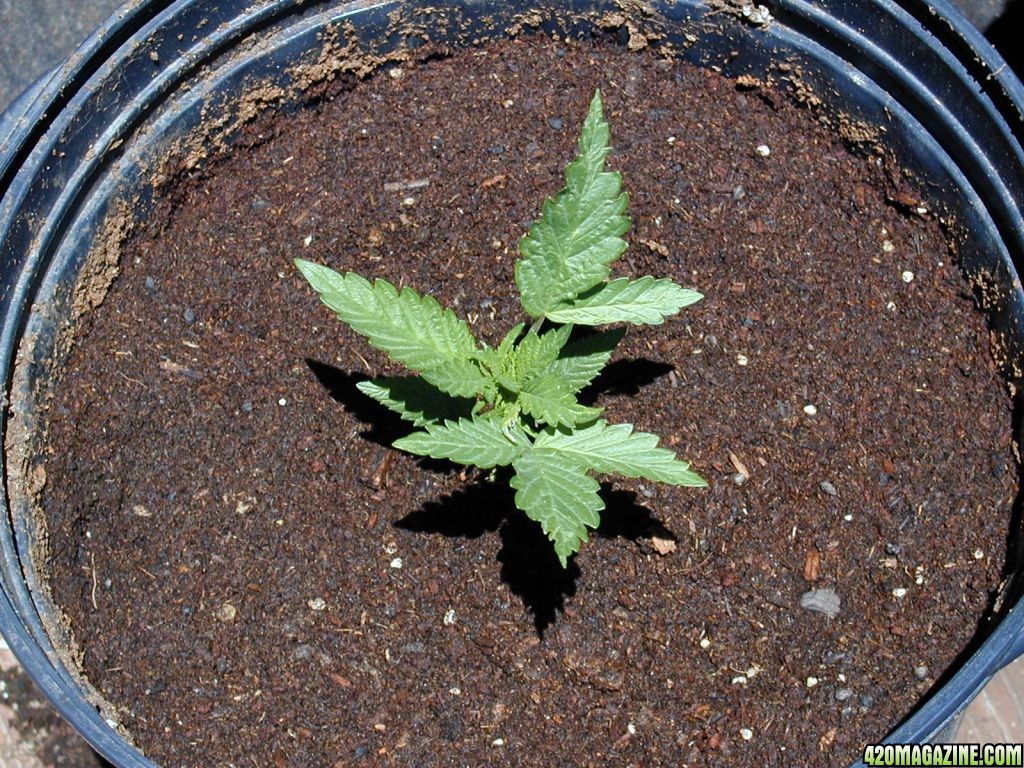 I am hoping that those of you out there who have grown either Northern Lights or White Rhino plants from seed will be able to tell me which strain these two distinctly different looking plants are.

Good news if you are correct and Seedling 2 and 3 are White Rhino. That means that I have two of each of the strains I ordered originally after all!

Thanks again for replying with your input.

Good news if you are correct and Seedling 2 and 3 are White Rhino. That means that I have two of each of the strains I ordered originally after all!

Thanks again for replying with your input.

Here's my favorite Rhino if you wanted to compare for yourself. 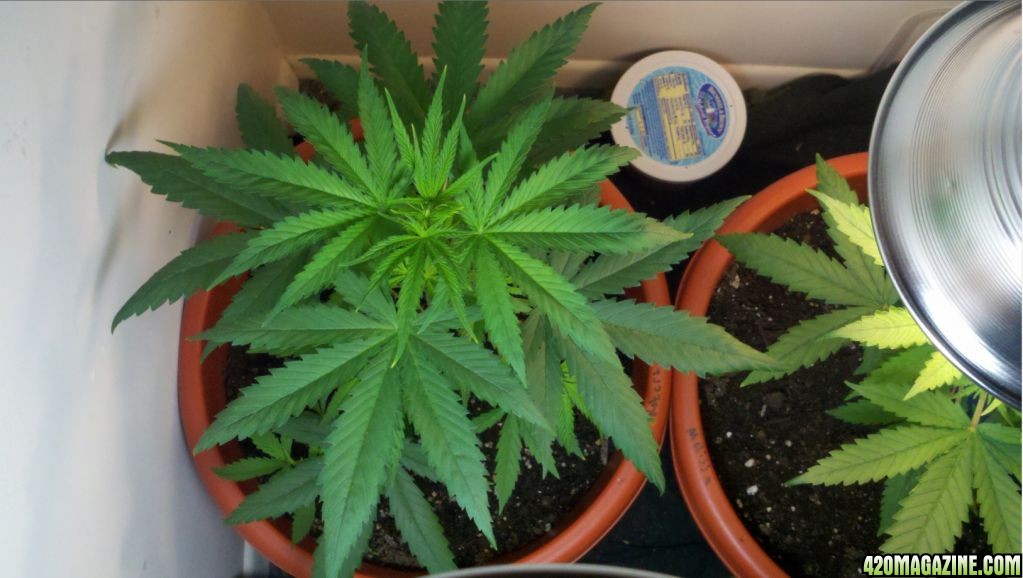 Interesting... That actually looks closer in appearance to Seedling #1 to my eye than Seedling #2 or #3. Notice that the leaves of 2 and 3 have only three fingers instead of five until the most recent group just now emerging on #2?

I was looking at some flowering photos of both strains just now and ironically, they become very similar at the later stages with the colas of both strains having nearly identical color, shape and overall density.

It is really hard to find any seedling photos of either strain though. That is the reason I posted this thread.

And in any case, It looks alot like seedling #1 too but my plants leaves were slightly broader in that stage.
I just remember my plants resembling #2 when they were seedlings.

If you look in my photo gallery, there are eight pics of white rhino in various stages of growth and mutation. Rhino seems to like being mistreated. Hope this helps.

edit: the plant in the pics was germinated on April 14. You can date the plants by the time stamp on the pics
Don't let fear or common sense stop you

von Liebig's "Law of the Minimum"

Hey! Thanks a bunch for the invitation!

I just now had a look at your photo gallery. Your plants are indeed "leafy" like my Seedling #2 and #3 are. Very Indica looking.

I suspected that 2 and 3 were the White Rhino, since all the shots I have seen of NL at later stages of development more closely resembles strains like Purple Urkle, Blueberry and GDP, just without the purple tendencies.

Mistreated? How so? Are you referring to your somewhat unconventional growing situation in those photos?

Thanks again for posting!

In the early growth stages, my pH meter was way out of whack, the lights were totally wrong spectrum, temperatures were erratic...in short, everything that could possibly be done wrong, I probably did. It's a good thing it's a weed.
Don't let fear or common sense stop you

von Liebig's "Law of the Minimum"

too old said:
In the early growth stages, my pH meter was way out of whack, the lights were totally wrong spectrum, temperatures were erratic...in short, everything that could possibly be done wrong, I probably did. It's a good thing it's a weed.
Click to expand...

They definitely are a forgiving plant! I've had my share of minor disasters too over the years and have always been impressed with how often you can bring a Cannabis plant back from the brink and have it end up giving you some great bud!

S
Selecting next strain - Any advice?