A house fit for Grand Designs is under construction in Canberra's inner north.

Once completed, the O'Connor knockdown rebuild will be carbon neutral, termite proof and fire resistant.

And it's made of hemp.

When home owner Rowan Woodburn approached designer Angela Knock to draw up plans for a new home, his priority was to slash his energy bills.

"We're not greenies per se," he said.

"Once we went through the specifications it was a no-brainer."

So what is hempcrete?

Ms Knock suggested the concept of a hemp home, knowing the product had many properties well suited to Canberra's climate.

"For Canberra's climate, where we have really cold winters and really hot summers, we need both of those things.

"Hemp ticks all the boxes."

Built using a product called hempcrete, the four-bedroom home will have the capacity to absorb and store up to 18 tons of carbon dioxide from the atmosphere.

Hempcrete is made by mixing shredded hemp with water and a lime binder.

"They're all natural materials and when you mix it up it looks a bit like apple crumble topping," Ms Knock said.

The hempcrete is then formed around a timber structural frame and finished with a lime render that bonds with the hemp.

"As it carbonates and the lime sets, it gets harder and harder and produces something very solid.

"It is breathable, so it is also water permeable, which means moisture in the air can escape to the outside and prevent condensation on the windows when there is trapped heat."

An alternative to bricks and mortar

The Woodburns are hopeful their decision to use the hemp product could pave the way for others.

"There was quite a bit of labor involved in finding our way, but hemp will so radically reduce heating and cooling loads," Mr Woodburn said.

As part of the process, construction firm Prostyle had workers undertake a training course in working with hempcrete.

And the Woodburns have had the opportunity to get their hands dirty too.

"We had a team of five or six people who helped us with the tamping of the hemp – squashing the hemp into the mixture," Mr Woodburn said.

"It was a fantastic opportunity to be involved in the construction of my own house from day one." 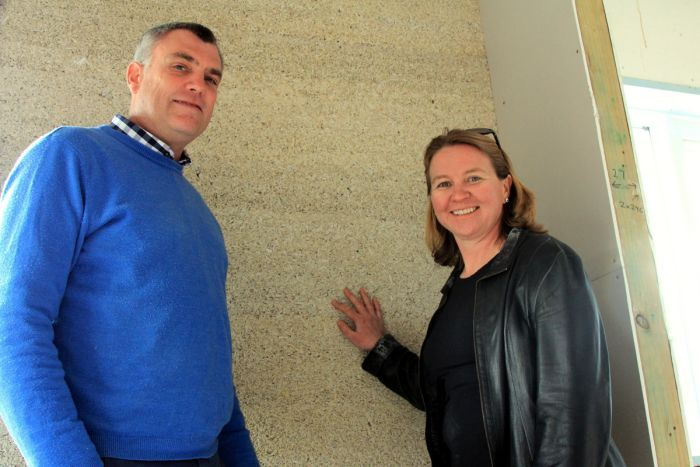 S
Hempcrete - Made From Hemp - Used To Build Houses

CO: Denver Will Soon Have A Building Made From Hemp