Despite all the recent talk of superfoods, one genuine culinary gem has been stymied for decades by political intransigence, infuriating red tape and unfair associations with drug culture.

Hemp seed — free of the mind-altering chemicals of its druggie cousin cannabis — is almost too good to be true for consumers seeking a healthy alternative food source, and for farmers wanting a new lucrative, low-fuss crop.

It ticks a host of must-have -nutritional boxes: high in omega 3, 6 and 9 essential fatty acids and protein, but low in sugar and free of cholesterol and gluten.

And unlike some of the dour, unpronounceable grains touted as superfoods, it tastes good; with a subtle flavor somewhere -between a seed and a nut, with hints of pine nut or almond.

Until now, hemp seed has been able to be grown in Australia only for use in cosmetics and shampoo, much to the frustration of farmers who have watched rivals in Canada, Europe and the US steal market share.

That restriction will end from November 12, following a belated change of heart by the nation’s health and agriculture ministers six months ago, sparked by years of campaigning by farmers and food entrepreneurs and investigations by the food standards regulator. And so, for the first time, the sale of hemp seed in human food will be legal in Australia and we finally will be able to buy food and supplements made with the seed, its oil, “milk” and flour.

Farmers and food and agribusinesses nationally — but particularly in Tasmania, which has grown the much-maligned crop for use in cosmetics and shampoos since the 1990s — are preparing to cash in. The island state is gearing up to become a major producer, doubling crops and investing in new equipment and a dazzling array of new products.

Tasmania’s cool temperatures, long growing season, nation-leading hemp-friendly legislation and penchant for value-added niche products give it an edge over mainlanders, following the long-awaited legalization, although some NSW farmers also are interested.

The area under hemp cultivation in Tasmania this -summer is to double to 600ha, while one company alone plans to have 1000ha under cultivation within two years.

The number of growers is doubling, while hundreds of thousands of dollars are being spent across the state on new equipment to dry and clean hemp seed.

“The potential is huge — it’s quite a superfood and it’s got a lot of health benefits and so there are big opportunities,” says Paul Amourgis, whose Van Diemens Land Creamery plans to sell hemp ice-cream from its newly opened punt on Hobart’s waterfront.

“People are eager to try different flavors and are interested in having a go at it, so I imagine it will be quite popular.”

Amourgis is trialling hemp seed and banana and hemp seed and honey ice creams. Both are delicious — the hemp milk is a little like soy and the nuttiness of the seed complements the other -ingredients.

Farmers also are excited, despite predicting an initial flood of imports with which they will have to compete. “We’ll have pretty strong competition from overseas, where they’ve been able to grow and sell it (for food) for many years,” says Tim Schmidt, hemp grower and president of the Hemp Association of Tasmania.

“So we have some catching up to do. But we’d hope to base our -exports on our clean, green image and unique growing conditions.”

Tasmania Seed Dressing and Storage, in the state’s north, has -installed a new cleaning line primarily dedicated to hemp seed and is about to install a $350,000 seed drier with hemp producer Ecofibre.

The facility’s manager, Morgan Leath, expects a quadrupling of hemp seed handling in the next few years. “I do believe it will grow significantly and that in the short to medium term we’ll be seeing as much as 1000 tonnes of hemp go through this facility,” Leath says.

Down south in the Huon Valley, the entrepreneurs behind the Tasmanian Tea Company are also embracing hemp seed production and food products at their 13 Seeds Hemp Farm.

Co-owner Terry Memory says the company — which until now has been limited to growing hemp to make skincare products — is embracing hemp for food, increasing its previous 3ha under hemp cultivation to 13ha this season and to as much as 80ha next year.

“Our ultimate goal is to be able to grow varietal types really suited to Tasmania,” Memory says. “We are interested in the GLA (gamma-linolenic acid) anti--inflammatory qualities of it, for a range of nutraceutical products, and growing plants with elevated levels of it consistently and -reliably.

“It’s sort of like what our whiskey and wine industries have done in Tassie: having something that profiles uniquely to the world -because it’s done here.”

In terms of food products, the options are seemingly limited only by imagination and entrepreneurship.

Memory’s 13 Seeds — which has installed new hemp seed -de-hulling equipment and has a hemp oil press — will place 80 beehives on a 6ha plot to be sown with hemp. The idea: hemp honey.

As well as selling hemp seed hearts — for use in cooking or to be sprinkled on cereal — it plans a range of hemp seed food products including porridge, muesli, protein powder (including an avocado and hemp variation), oil, chai, tea and oil gel capsules.

However, success may depend on shaking hemp’s association with cannabis and winning over middle Australia.

Memory says internet giants Facebook, Twitter, Instagram and Google bizarrely still ban the marketing of products using the term hemp, while some hemp companies unfortunately -have embraced the “stoner” associations in their marketing, including by using the hemp leaf symbol.

“That challenge can’t be understated — we need to explain it’s like oranges and lemons; they are both citrus but very different,” Memory says. “People need to know that cannabis is the stuff that gets you stoned and hemp doesn’t.”

• Hemp Australia. Tassie-focused, food-grade hemp producer expects to have 1000ha of hemp under contracted cultivation within a few years.

• Tasmania Seed Dressing and Storage, northern Tasmania. Has a new cleaning line primarily dedicated to hemp seed and is about to install a $350,000 seed drier with hemp company Ecofibre. Expects to be dealing with 1000 tons of hemp seed within a few years.

• 13 Seeds Hemp Farm, southern Tasmania. Increasing 3ha under hemp cultivation last year to 13ha this season and to up to 80ha next year, as it expands from hemp skincare to hemp food products.

• Its range of hemp food products to include: hemp
seed hearts — for use in cooking or sprinkling on cereal — and hemp seed versions of porridge, muesli, protein powder (including an avocado and hemp variation), oil, chai, tea and oil gel capsules.

Good source of protein and fiber

Free of cholesterol and gluten

Contains GLA, or gamma-linolenic acid, said to have anti-inflammatory qualities, to assist in skin conditions and to have cardiovascular, psychiatric and immunity benefits 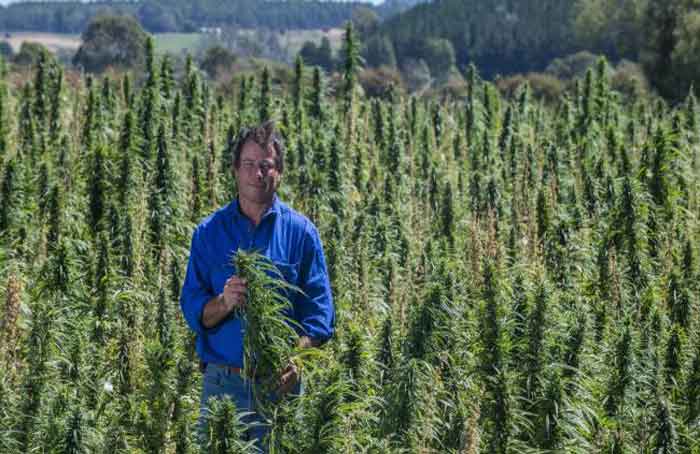 Hemp Is Australia's Newest Superfood After Being Legalized

New Zealand: Is Hemp Going To Be The New Super Food