Australia: Woman Turned To Cannabis To Treat Back Pain

A Mother of two caught with marijuana said she used the illegal drug to treat her back pain.

A small amount of cannabis and some drug utensils were found at Deirdre Clara McBride's home when police searched the One Mile residence on February 11.

At Ipswich Magistrates Court on Friday, the 45-year-old pleaded guilty to possessing the illegal items.

Defence lawyer Justin Thomas said McBride had undergone two back operations for a herniated disc but that her injury still caused her pain.

He said his client had been prescribed Valium and Endone for the pain but found the treatment caused unwanted side effects.

He said McBride was later introduced to cannabis as an alternative means of pain relief and had used the drug since then.

"You know it's against the law, even for medicinal purposes," Ms Sturgess told McBride.

"The law in Queensland simply doesn't allow it.

"Whether it will one day or not is another matter - it doesn't at the moment."

Ms Sturgess urged McBride to get proper medical advice if she needed help with pain relief rather than continuing to use cannabis.

McBride was convicted and fined $300. The seized items were forfeited.

Overseas medical trials have shown marijuana to be helpful in the treatment of chronic pain, multiple sclerosis, cerebral palsy, cancer and the side effects of chemotherapy.

Its use has already been legalised in 23 US states and a number of European countries including the UK and Germany. 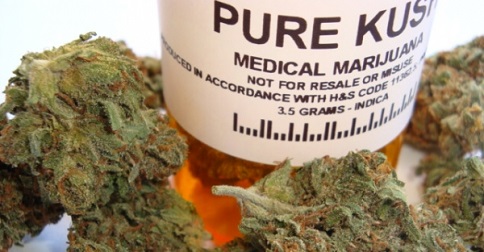