Automakers' Green Push In Parts Lifts Use Of Hemp

Survey the latest at the Detroit Auto Show and you will find fibers from water bottles in car seats, hemp in the dashboards and citrus peel in the tires.

Automakers, in a continuing quest to develop lighter and more environmentally-friendly vehicles, are making increased use of sometimes unlikely materials in their cars and trucks.

U.S. auto giant Ford has set a requirement that the seat fabrics sold on all vehicles in North America must have at least 30 percent recycled content, said Barb Whalen, Ford's color, material and design manager.

There will be no relaxation of this rule, she said.

"It's the right thing to do, for the environment, for ourselves and our customers," Whalen said. "Even though oil prices are cheaper, it's still the best thing."

Despite the current low price of gas, stricter fuel economy standards loom in the U.S., and automakers are continuing to develop alternatives to gas-powered cars.

Audi and Lexus both showed off zero-emission hydrogen fuel cell prototypes at the Detroit show. Fiat Chrysler's plug-in hybrid version of the Pacifica is a first for the minivan segment. And Chevrolet showed the all-electric Bolt, which can go for 200 miles (320 km) on a charge and will go on sale later this year.

Automakers are also using more plant-based items, such as eucalyptus fibers, which are going into dashboards of the BMW i3, a plug-in hybrid.

Faurecia, a French automotive parts supplier, sees growth in its "bio" business, even if it remains small, said Pierre Demortain, a sales executive in the joint venture Faurecia APM, which specializes in such materials.

Natural materials tend to be lighter than synthetic ones, he said.

"Hemp is a plant that doesn't need irrigation or pesticides to grow and can reduce door weight by 25 percent," he said.

Faurecia currently combines hemp with petroleum raw materials as a component in its plastics. But in two or three years, the plastics are expected to be 100 percent natural-based, Demortain said.

Some key car parts face challenges before they can increase their use of natural products. Tires are today composed about 75 percent from petroleum-based products and 25 percent from natural rubber trees.

Michelin would like to increase the share from vegetable sources, but "it's difficult to imagine doubling the number of rubber plants, " said Thierry Willer, a spokesman for Michelin specializing in materials.

For that reason, Michelin is researching ways to make synthetic rubber from sugars derived from biomass.

Rival tire maker Continental is also trying to solve the rubber riddle with Taraxcum, which is derived from a perennial plant sometimes called "Russian dandelion" (taraxacum), that it says has similar properties to latex from rubber trees.

Pirelli is exploring yet another option with rubber-like qualities: the guayule, a flowering plant native to the deserts of the southwest United States and Mexico.

These include sunflower oil, which can lend flexibility to the tire at low temperatures, and resins from lemon peels, which gives "the tire more rigidity," he said.

Renewable materials must work as well as synthetic materials to make it into the tires.

"But if you can get the same performance, you choose what's natural," Willer said. 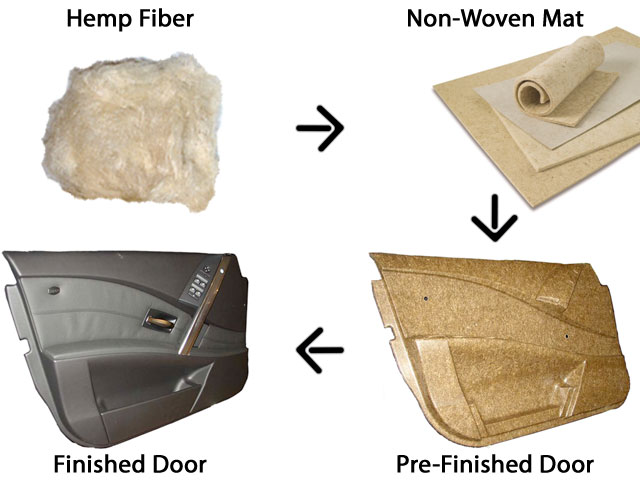 W
Car Parts Made From Hemp