A Utah political issues committee claims voters in the state overwhelmingly support medical marijuana ballot initiative, citing a recent poll, though critics say the study is one-sided and doesn't explain the complexities of the issue.

A survey by the California-based opinion research firm Fairbank, Maslin, Maullin, Metz & Associates says nearly 3 in 4 Utahns support a medical cannabis ballot measure, and 51 percent believe approval for medical use of marijuana in Utah is "inevitable."

The high numbers across all major demographics of Utah voters encouraged the Utah Patients Coalition to submit a 2018 ballot initiative application to establish a medical cannabis program in the state.

"Seeing the survey results really gave us some resolve in our commitment to making this happen," said DJ Schanz, campaign director for the coalition of patients, caretakers and advocates of medical use of marijuana. "The public indeed does support the idea of medicinal cannabis."

But Derek Monson, director of public policy for the conservative Salt Lake-based think tank Sutherland Institute, said the survey was one-sided and didn't show respondents the full scope of the situation.

"Basically, you're asking people, 'Do you want to give people who are in serious and chronic illnesses more options?' And of course everyone would want to do that," Monson said. "Without all the facts, people understandably answer questions like they did on that poll."

According to the poll, 49 percent of likely Utah voters said "definitely yes" when asked if they would support a ballot initiative that would "allow doctors to recommend medical marijuana as a treatment for cancer, epilepsy, Alzheimer's and other serious illnesses."

About 20 percent of respondents said they would "probably" support the initiative, and 4 percent said they were "leaning" toward yes – a total of 73 percent.

"The study was run to find out if it was a viable solution," said Christine Stenquist, coalition spokeswoman. "To undertake a ballot initiative, you need to find out if you really have the votes."

The poll was commissioned by the Marijuana Policy Project, a nonprofit organization based in Washington, D.C., and focused on national marijuana policy reform. It has a 4.9 percent margin or error.

Fairbank, Maslin, Maullin, Metz & Associates, or FM3, in February polled more than 400 Utahns likely to vote in the November 2018 election.

"It really helped us decide to move forward (with the ballot initiative) when we saw there was such support in Utah," Schanz said.

The survey gave participants a series of pro and con arguments on whether Utah doctors should have the option of recommending medical marijuana to patients suffering from serious illnesses or chronic pain.

Twenty percent of respondents said they opposed a medical cannabis ballot initiative in Utah, while 7 percent were undecided.

The poll also found that 92 percent of Democrats support such a ballot initiative, while 75 percent of independents and 64 percent of Republicans would also favor the measure.

From a religious standpoint, the survey showed support from 63 percent of voters who said they are practicing members of The Church of Jesus Christ of Latter-day Saints. Of respondents who said they are not Mormon, more than 90 percent would support the initiative, as would 87 percent of voters identifying as church members who are not active in the faith, according to the poll.

The LDS Church issued a statement Wednesday calling for more research and Food and Drug Administration approval on the effects of marijuana before it's approved for medical use.

"Lawmakers across the country have wrestled with whether to legalize the use of marijuana for medicinal purposes," LDS Church spokesman Eric Hawkins said in the statement. "This discussion raises legitimate questions regarding the benefits and risks of legalizing a drug that has not gone through the well-established and rigorous process to prove its effectiveness and safety."

"We simply don't understand the harms that it might do to people," Monson said. "We think the most compassionate and reasonable policy for Utah communities is the cautious approach that the Utah Legislature is taking."

In January, the Utah Medical Association made a public stand against the term "medical marijuana," claiming the label is deceptive because of the way it frames the issue of legalization and access to uncertain voters who otherwise know little about the topic.

That person "would (assume) that it is approved by the medical community, that (doctors) would know what to prescribe," Utah Medical Association CEO Michelle McOmber told the Deseret News at the time.

Monson agrees with lawmakers, saying further research is the best way to learn the positive and negative effects of marijuana to make future policy decisions.

"If we're going to do it, do it in a way that follows that 'first, do no harm' principle rather than rushing forward to legalize it as fast as we can because we're only thinking about a certain group in society rather than society as a whole," he said.

But the Utah Patients Coalition says enough research has been done.

"This research bill is weak tea," Stenquist said of the Legislature's action. "It doesn't have enough in it to actually do what we need. We need in-state grow, we need patient access. ... This is the opposite way of doing this. To do the research before you can have patient access for this particular plant, it doesn't make a lot of sense."

The ballot initiative application calls for Utah voters to decide whether the entire marijuana plant should be legal for medical use in the state.

The Utah Lt. Governor's Office reviews ballot initiative applications for several requirements, including whether the initiative is unconstitutional or nonsensical, contains a single subject, the objective is clearly state in its title, and it's not identical or substantially similar to any initiative applied for the previous two years.

If the Utah Patients Coalition's application meets those requirements, the group can begin circulating and gathering signatures for support.

The coalition must hold one public hearing at seven designated geographic areas of the state and collect about 113,000 signatures from 26 of 29 state Utah Senate districts before April 15, 2018.

The initiative allows patients to use marijuana in oils and for topical and edible treatment, as well as vaporizing cannabis. It would ban smoking marijuana, home growing the plant and public use. DUI enforcement would remain unchanged.

The initiative would also restrict who can prescribe cannabis and limit prescription renewals within two-week periods.

"I'm pretty optimistic seeing those numbers," Stenquist said. "It really shows that Utahns are ready for something different, for a change." 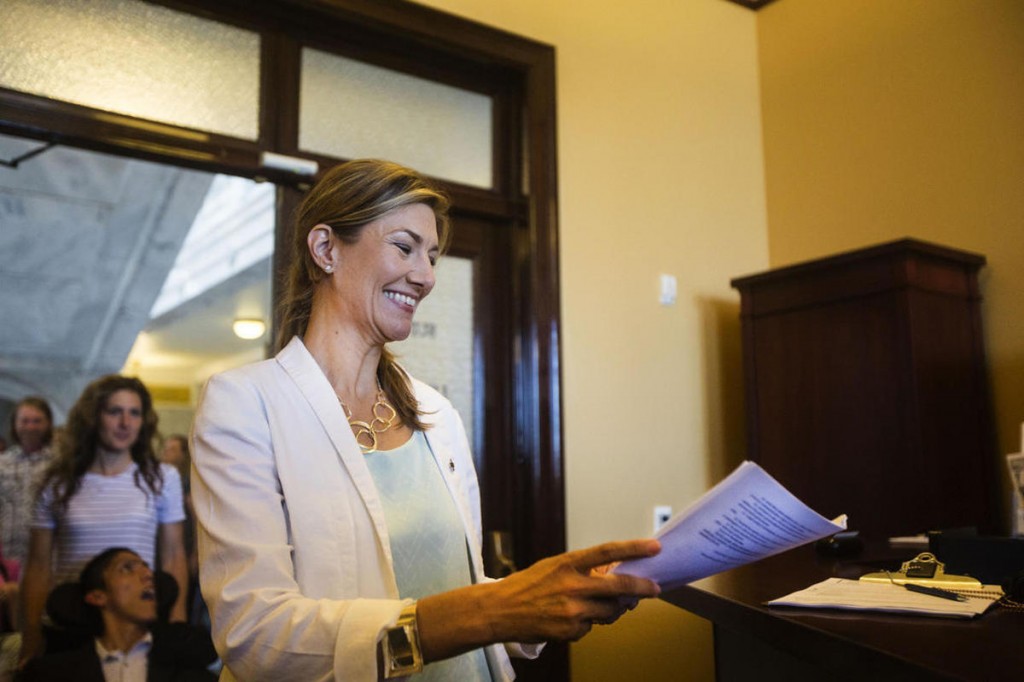