Hi Everyone, I noticed recently that my Afghani Skunk plant had a single purple calyx. A few days later that calyx now looks like the photo below. Is this the start of a male flower, or just some odd calyx growth? I have to admit, I've never seen a calyx do this before. If it is a hermie flower, it is the only one on the plant and hopefully can be picked off.

I dont think its a nanner. could you get pics from a couple of angles??
https://www.420magazine.com/forums/journals-progress/224301-go4snypr-hydro-grow.html

yea take a few different angle shots ..hard to tell from that pic but i dont see nanners .
IF U DONT

Some strains may show a purple colouring in calyx & in leafs... i would not worry about that

My last strain showed purple calyx's (northern lights) freaked me right out o be honest, i even doubled checked strain info which apparently it does this, but not all seeds/plants... so ye i was impressed & rather happy with the results !


Unfortunately what pic's i had taken for POTM comp was some how deleted due to my poor IT skills... bummer.

But ya i see don't any bananas as they are in general thicker a slight different colour & smoother in appearance than pistils !

Ye ya pretty cool in my opinion

I'm not worried about the purple calyx, It's the little yellow nub protruding from it that has no pistols that is worrying me.. here's some more angles and a circled diagram of the yellow nub. 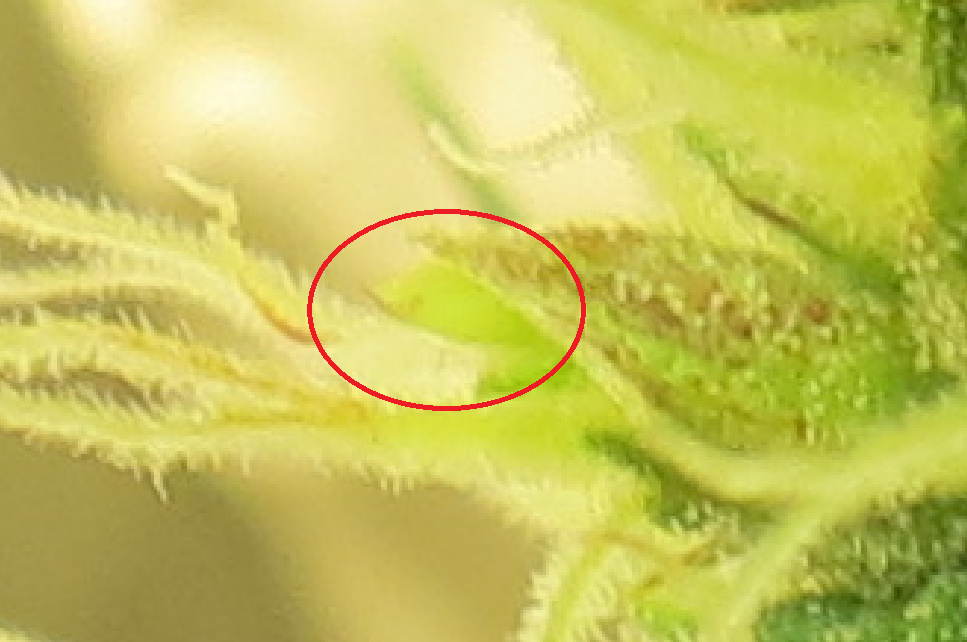 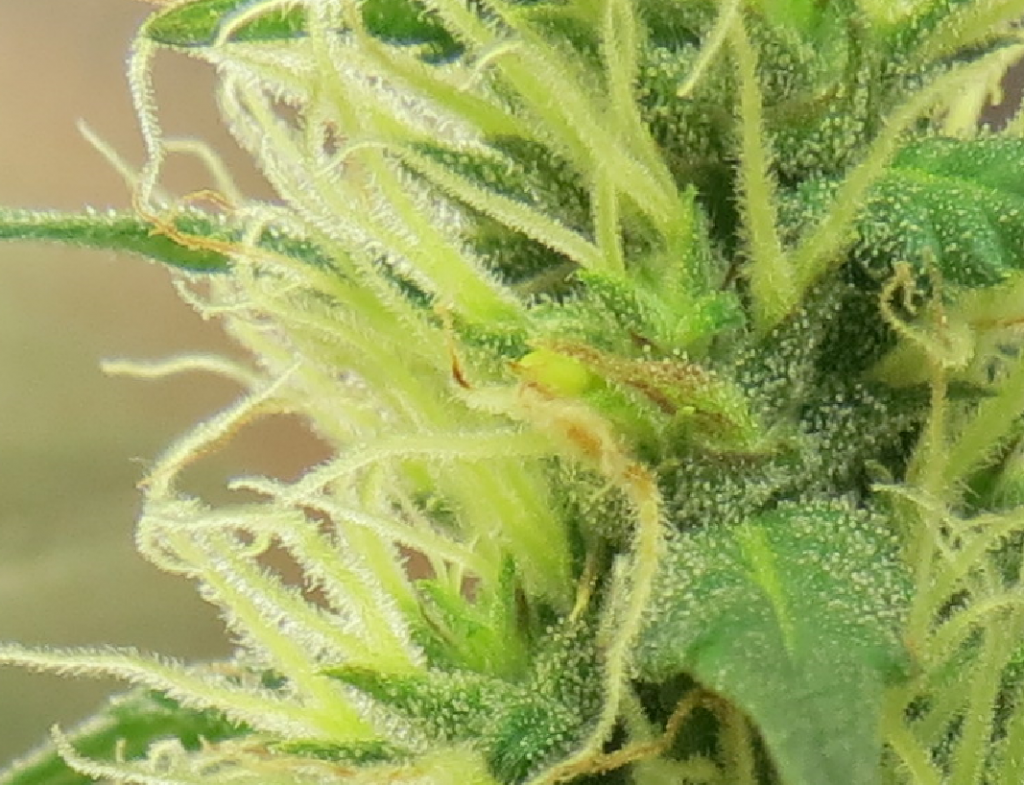 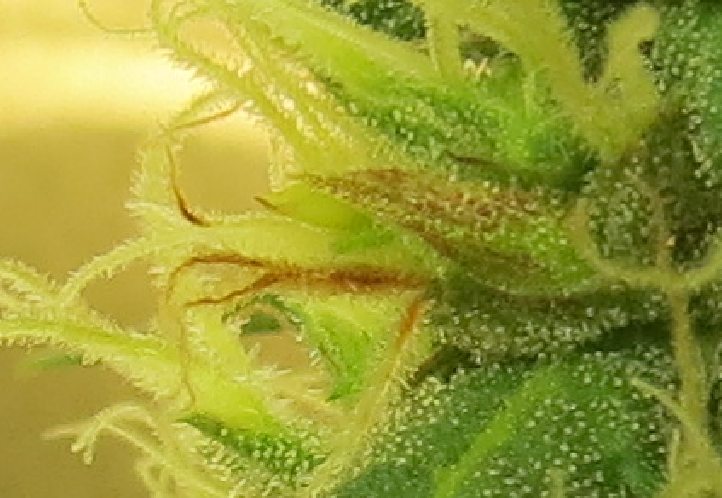 my only guess is that if not a banana, it's most likely a yellow double-calyx in the process of turning purple? But that doesn't explain the lack of a pistol from it and lack of trichomes compared to all the other newly grown calyxes.. I noticed that the pistol beside it has turned brown today, which i'm hoping isn't the result of pollen touching it.
Nicopalm's ultra-cheap Afghan Skunk CFL Grow

I have not myself really observed bananas form in early stage ? & that pic's provide are pretty darn good detail

How ever i would not jump to to conclusion just yet !

Some extra details may be needed to be included such as...

3. length of flowering time for strain or increased flowering time used at present ?
"Mama always said growing was like a box of chocolates. You never know what you're gonna get."

I have not myself really observed bananas form in early stage ? & that pic's provide are pretty darn good detail

How ever i would not jump to to conclusion just yet !

Some extra details may be needed to be included such as...


1. This seed came from a plant grown from a feminised seed I had aquired that went hermie due to light leaks (or so I thought). My current room has NO light leaks. When the original seed from the seed bank went hermie, it was 1/2 of the plant that exhibited the signs of changing sex. I kept about 40 good healthy seeds and gave away the rest. This plant is the first seed I have grown from that batch. However, friends of mine have grown out seeds from that batch without issues both indoors and outdoors,

Origin & Popularity: In the 60’s and 70’s Afghan hash was the best hash in the world, and widely used in Afghan tea houses. The hash was very sticky, dark brown and had a pure honey-sweet flavour. It was a real Indica and the high it gave made you feel like you were in a dream paradise. In the 70’s it was crossed with a Latin American Skunk, which had more Sativa characteristics. Afghan Skunk consists of 30% Indica and 70% Sativa. The Afghan Skunk is a cannabis strain which is becoming increasingly popular. I can easily understand this, because the high harvest surpasses my expectations again and again. Afghan Skunk is also excellent for medical purposes

Production: Afghan Skunk is interesting for both beginners and more experienced growers. The seeds are suitable for all methods of cultivation, so indoors and outdoors. The plant can withstand cold and rain. Wherever I grow Afghan Skunk, its excellent aroma is never compromised. The plant does not become very big, but (especially when I grow my Afghan Skunk outdoors) the yield is quite high. A cold climate turns the tops a beautiful purple/red colour, so they will already provide enjoyment during the flowering period. I definitely recommend that novice growers give growing Afghan Skunk a try because the plant is strong and robust and therefore not prone to diseases or fungi. The plants complete their flowering period after 9 to 11 weeks, sometimes even after 8 weeks already.

Character & Flavour: The Afghan Skunk combination is full of fruity undertones with the flavour of berries that provide, along with the male Afghan Haze, a crisp, sweet, heavy and recognisable scent and flavour. Just smelling the plant makes me want to smoke Afghan Skunk. Afghan Skunk gives a strong spiritual high. The seeds are perfectly balanced with both euphoric Sativa highs and relaxed Indica tones. I smoke Afghan Skunk when I feel like relaxing. It makes you lazy and hungry, but also cheerful. In the medical field Afghan Skunk helps relieve stress, lack of appetite and anxiety

3. They say 8 weeks flowering time, but in my opinion this strain is best harvested around 90 days of flowering being a sativa dom.
Nicopalm's ultra-cheap Afghan Skunk CFL Grow

did u start with a hermied seed?
IF U DONT

devils letuce said:
did u start with a hermied seed?
Click to expand...


Yes, the original plant went hermie, I allowed it to finish. I kept the seeds it produced and grew this one from those seeds.

I have also just taken a very small needle and pulled back the calyx surrounding the yellow nub and it definately looks like an unopened banana now. I'm probably going to just pick it off and hope for the best since it is the only one on the plant.

I will take a couple more pics with the calyx pulled back and post them here before I pinch it off.
Nicopalm's ultra-cheap Afghan Skunk CFL Grow

It's possible that she's bolting.

Here's a few pictures of some nanners I had.. 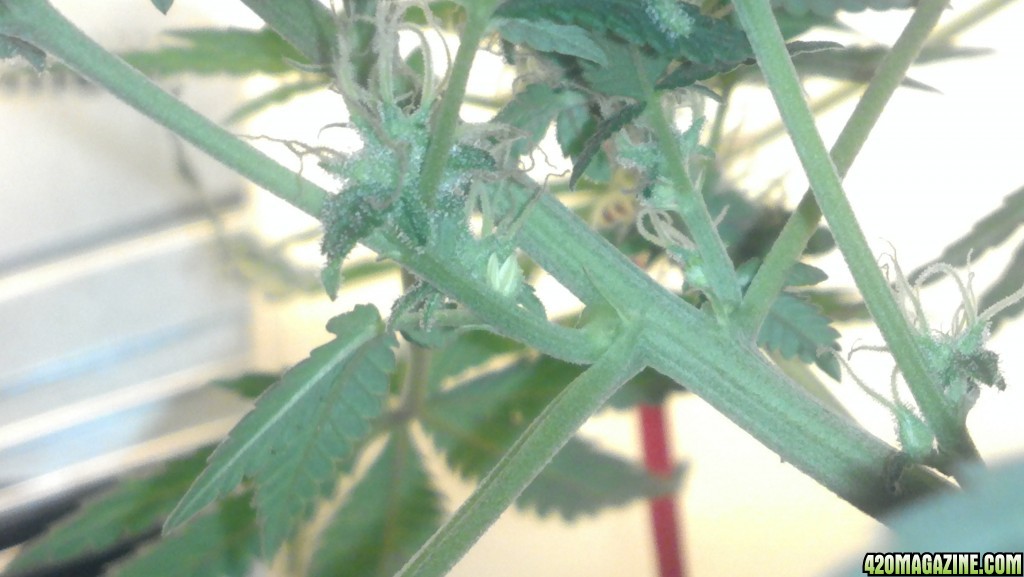 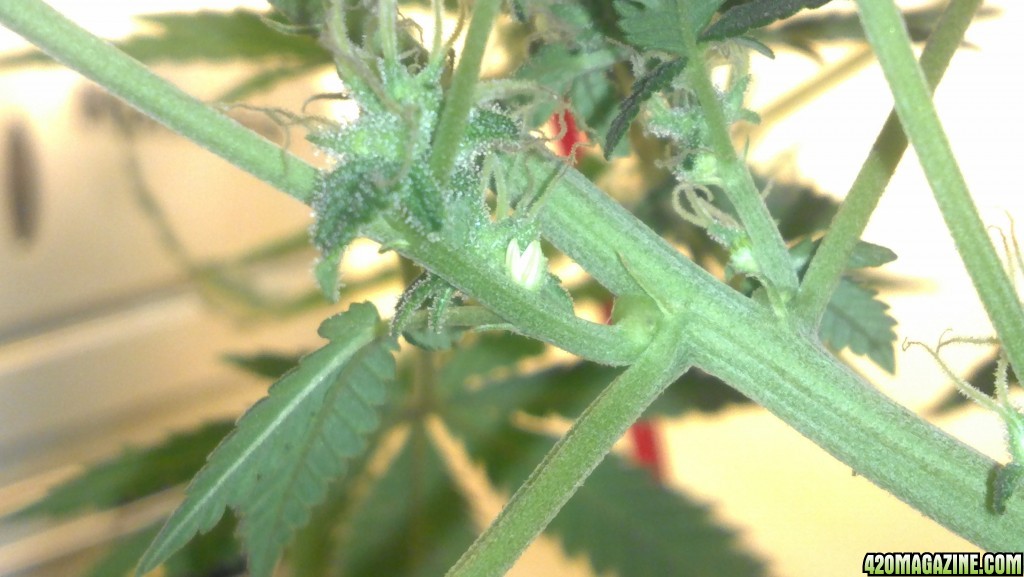 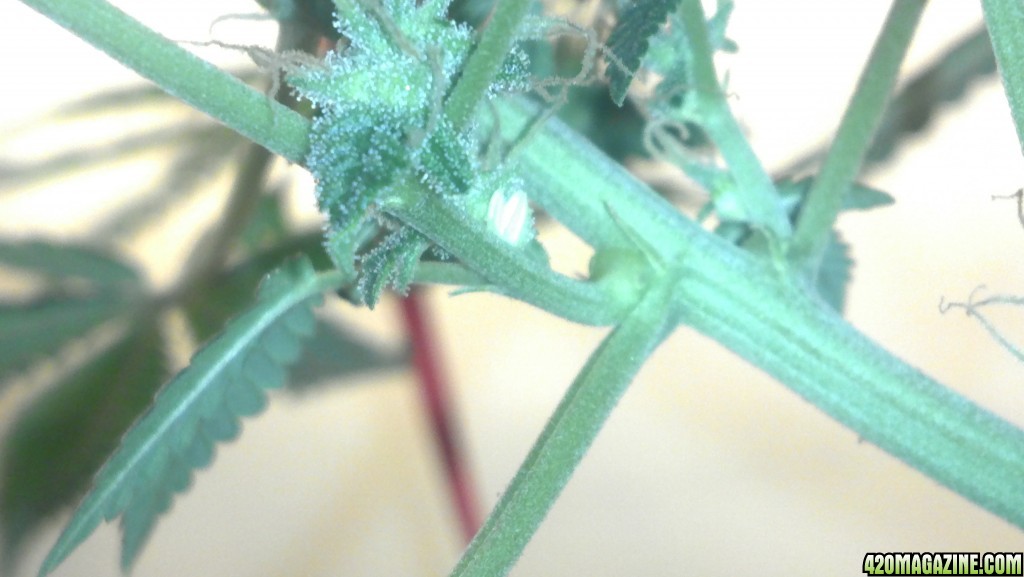 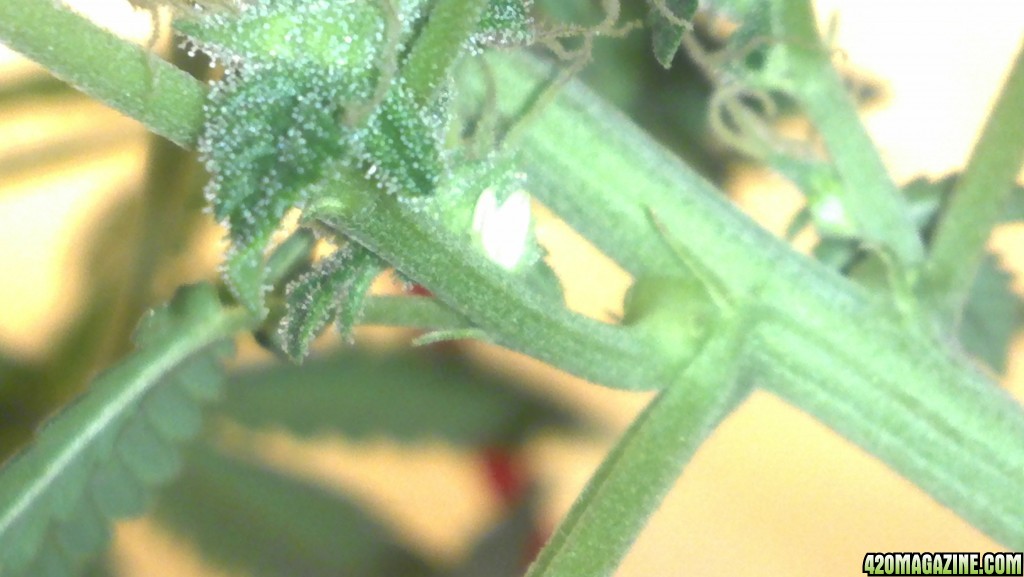 is it true that nanners dont have to open ? they just produce pollen ?

Nutty Journal where all sorts of crap happens

Nutty and his Microbe organic Journal

Yes, at first that's what I thought too Paddy, that she was bolting/foxtailing. But the lack of a pistol from the nub was the ultimate clue. After peeling back the calyx it was indeed a banana. I can see the grooves on it where the banana will seperate and open at some point today or tomorrow. I have never seen a banana form like this from inside a calyx before, I've always seen them form at nodes. We learn something new every day I suppose

I'll be entering the room shortly to grab the final pics before I remove the banana. I took a quick peek just now and it is on the verge of opening.

Judging from the pistols that appear fertilized I'll probably have a few seeds again as well, but only in that immediate location, nothing too damaging I hope.


As for the bananas having to be open to spread their pollen, I assumed that as well. From what I am seeing though, if a pistol touches an un-opened banana, it turns brown and appears fertilized. I wont know if that location is indeed fertilized for another month or so though.
Nicopalm's ultra-cheap Afghan Skunk CFL Grow

Here is the final pics.. definately a nanner. 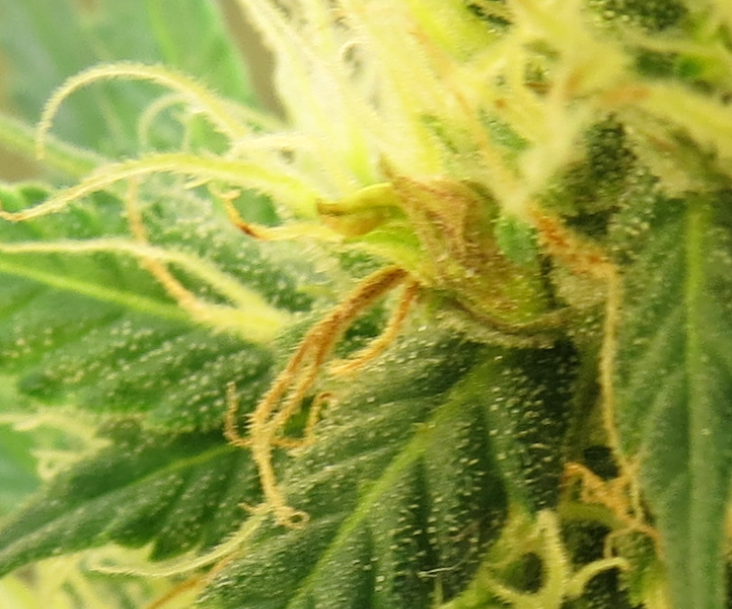 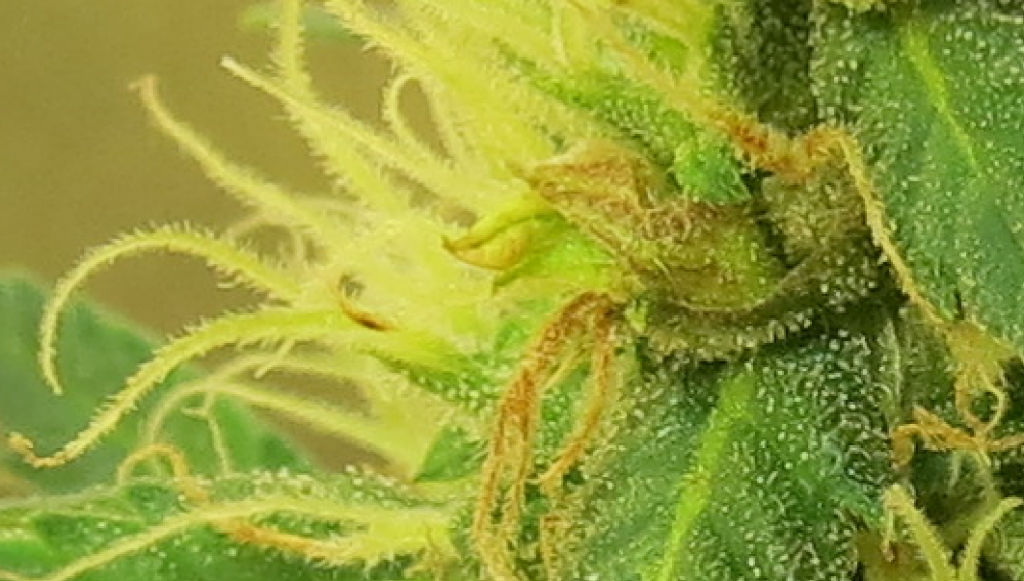 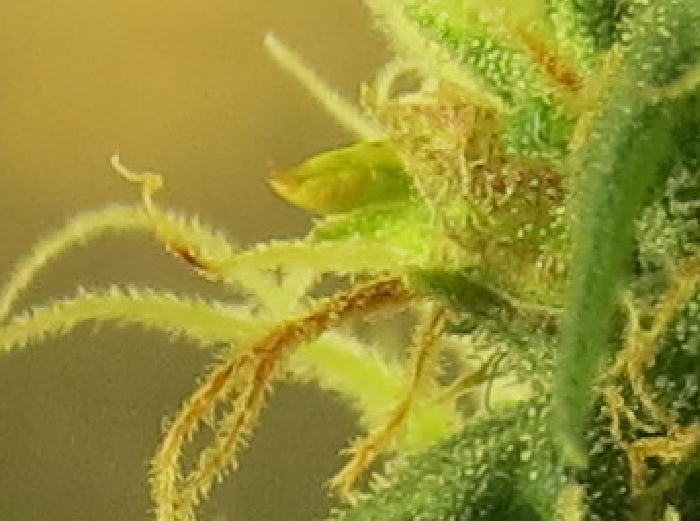 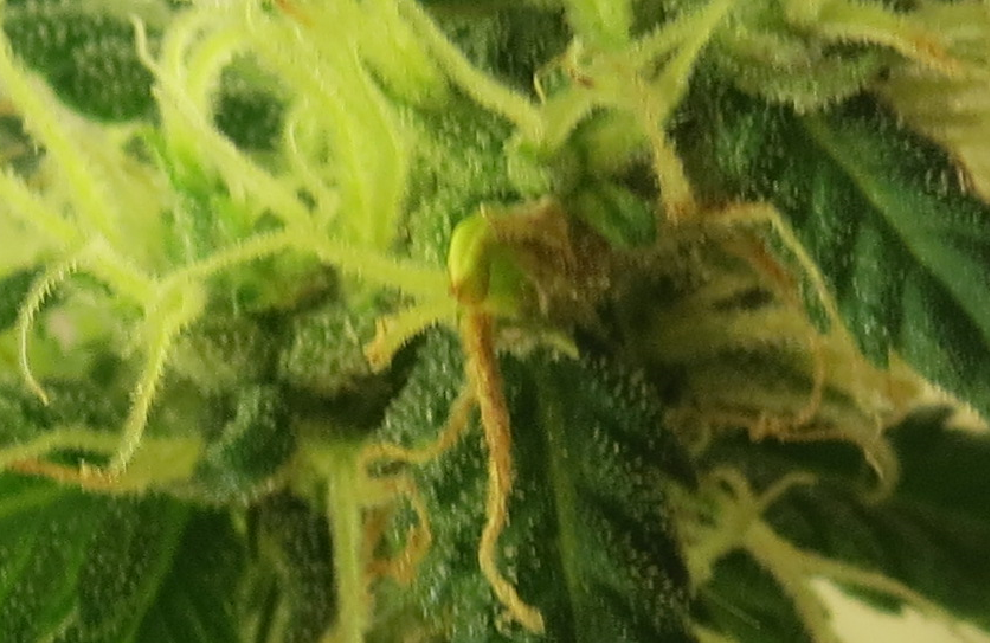 paddysmoke said:
is it true that nanners dont have to open ? they just produce pollen ?
Click to expand...

Being involved in horticulture and grown many hundreds of species of plants it should suggest that to produce pollen it would require to flower so to speak.....

So a banana might really be viewed as an unripe flower bud ?


But in the last few years of growing myself for medical reason & my own research of growing, i really don't think i have ever seen a pic of mature banana or what it doe's at end stage ?

Hell ye when most see one we pluck it off... fuck trashing the crop with a hermie ya know what i'm saying, hence any real evidence is not available !


It is really a big question

Some suggest seeds from a hermie are vastly female seeds whether that was regular seed hermie or a forced feminized seed/plant is another question all together ?

Hence a myth continues or what ever hearsay you wish to believe in due to no real fact ?

But seed collected from original plant may not always prove true so phenotypes or other abnormal occurrences may occur !
"Mama always said growing was like a box of chocolates. You never know what you're gonna get."

Well, I went ahead and used some tweezers to remove the banana, along with the portion of bud it was growing from. There is a small bald spot now where it used to be, but its still early enough where a nearby bud should fill in the space as it grows. I removed the bud all the way to the main stem basically hoping to prevent the banana from re-appearing.

I've been inspecting every bud very closely and it was definately the only banana on the plant at this time.

I'm curious though as to why the banana made the calyx turn purple before it emerged from the calyx. Very interesting stuff to someone like me who has never witnessed this happen before.
Nicopalm's ultra-cheap Afghan Skunk CFL Grow