Barcelona Is Fighting An Overdose Of Cannabis Clubs

Barcelona has a new tourist attraction that some locals wish would disappear: a burgeoning number of "cannabis clubs," where people can legally buy and smoke pot. Although selling marijuana is against the law in Spain, some regions allow local residents to set up nonprofit clubs whose members grow and share it for personal use. As recently as 2011, only a few dozen such groups were in the Catalonia region, which includes Barcelona. But since then, the number has risen to about 400, with some clubs opening cafÃ©s, on Las Ramblas and other popular tourist streets, that offer menu items such as "New York Haze" and "Big Bud." The clubs have drawn comparisons with Amsterdam's pot-selling "coffee shops," amid some predictions that Barcelona could even become the new pot capital of Europe.

Now the authorities are moving in. Police have shut down at least four Barcelona clubs in recent days for alleged violations that include sales to minors, drug trafficking, and hawking of memberships to passersby. Today, the city government placed a one-year moratorium on the creation of new clubs. Longer-established clubs are applauding the crackdown. "We need regulation," says Patricia Amiguet of the Federation of Associations of Catalonian Cannabis Users. The proliferation of clubs "is really corrupting the system." Local authorities have lost track of the number of clubs, she adds. While authorities have estimated that 140 to 160 clubs are now operating in Barcelona, Amiguet contends there are many more. "We think there are approximately 250 to 300 in Barcelona, and 400 to 500 in all of Catalonia," she says.

Most of Barcelona's older clubs kept a low profile and obeyed the law, which strictly limits membership to local residents, Amiguet says. Some newer ones, though, are clearly targeting tourists. "When you go to Las Ramblas, you find girls that are trying to get people to go into these places," she says. Some have even set up websites in foreign countries where people planning to visit Barcelona can get memberships in advance. "People have seen a way of making money," she says. "Some of the new clubs are getting investors from foreign countries."

Despite the comparisons with Amsterdam's coffee shops, Barcelona's clubs have an ambiance that's decidedly more pleasant, says Russ Hudson, who edits an online newsletter, MarijuanaGames.org, and has lived in both cities. Going into a Dutch coffee shop, he says, is like "entering a liquor store to make a purchase. It's highly commercialized, and the marijuana there is not fresh." In the traditional Barcelona clubs, he says, "it's like you are a member of a private club. When you go in, you're not buying, you're simply reimbursing the club for the costs. You can spend hours hanging out at a club, and the staff sort of chills along with you." Some newer Barcelona clubs, Hudson says, are "really crappy," with foreign visitors accounting for almost all their members.

One problem that Barcelona's clubs share with their Dutch counterparts is a catch-22 in their nations' drug laws. In both countries, it's legal to grow and smoke pot but illegal to sell it. Technically, Spanish cannabis clubs are supposed to grow all the pot they provide to their members. But, says Hudson, most clubs end up buying at least some from other suppliers. Although that's technically illegal, authorities "have no way to check," he says. "Where's the documentation? There isn't any." 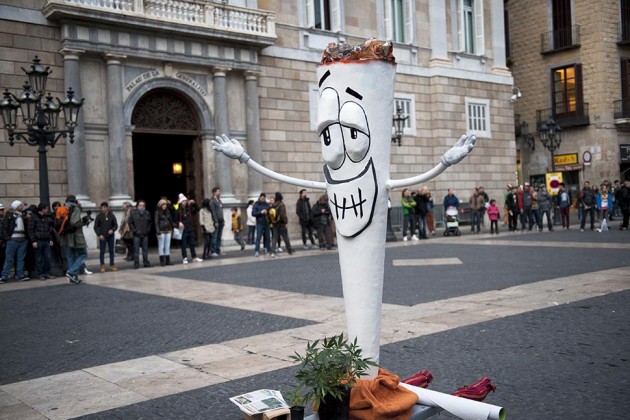 Legalize it folks. It would be so much simpler.
Big Jack's first grow ever! Flo-Og/auto FINI, Znet-9 LED, in dirt