Although the legalization of marijuana use, both for recreational and medical purposes, is sweeping the country, the woman who founded the nation's first locally sanctioned medical marijuana dispensary in Fairfax some 18 years ago is struggling to avoid homelessness. When Lynnette Shaw opened the Marin Alliance for Medical Marijuana in 1996, it was the first medical marijuana dispensary in the state to operate under the auspices of Proposition 215, California's Compassionate Use Act. But in 2011, a crackdown launched by Melinda Haag, the San Francisco-based U.S. attorney for the Northern District of California, shut down the Marin Alliance.

Haag threatened Shaw's landlord, Farshid Ezazi of Orinda, with confiscation of his School Street building if he continued to allow the dispensary to operate there. The Fairfax dispensary was among dozens statewide that federal prosecutors said they targeted due to their proximity to parks, schools and other facilities used by children. At about the same time, Shaw said she was notified by the Internal Revenue Service that she owed more than $10 million in back taxes; the IRS was disallowing all of the Marin Alliance's business deductions.

Shaw, who says she is broke, returned to Marin this week from Los Angeles, where she was living with friends. She came back to auction off memorabilia from the Marin Alliance in an attempt to generate money to help cover the mortgage on her Fairfax house, which she has rented out. "I've had two years of hell, and it's not fair," Shaw said. "I'm basically still being persecuted for inventing the licensed dispensary system, which started a revolution."

Shaw said she initially appealed the IRS order, and the agency has decided to allow her deductions for buying the cannabis she sold to members of the collective. The IRS is, however, continuing to try to collect the remaining $3 million from her. "I was handling a lot of cash, but I had bills to pay," Shaw said. "We got audited twice a year for the first five years. We proved time after time that we were honest and broke."

To get her license to operate in Fairfax, Shaw had to comply with 84 conditions set by the town's Planning Commission. Shaw said she has no money to mount a legal defense. She said the IRS confiscated the $10,000 in savings that she had. Her car has been repossessed. And she was recently notified that her future Social Security retirement benefits have been zeroed out. "I'm going to be declaring bankruptcy shortly," Shaw said. Fairfax Councilman Larry Bragmann said, "It's very sad and very unfair. It's not right when somebody has the courage to pioneer a project like this and ends up getting punished for their courage." Bragmann said, "Here you had a legal, regulated dispensary, which was really the model for what could be done for the patients, and right now in progressive Marin there is not one legal dispensary for patients."

Steve DeAngelo, director of the Harborside Health Center in Oakland, one of the largest dispensaries in the nation, said, "Our case is quite similar to Lynnette's, except since we are a corporation instead of a sole proprietorship. I will hopefully not find myself in the same situation as Lynnette. "It is a really, really horrible way for somebody who gave of herself so generously as Lynnette did to be paid back by the community," DeAngelo said. DeAngelo said the IRS has notified Harborside it owes $2.4 million in back taxes for its first two years of operation, and he expects the agency to increase that amount, since it is in the process of auditing subsequent years of operation.

Harborside is challenging the IRS on those assessments and is also battling an attempt by Haag to seize the building in which it operates. DeAngelo said the city of Oakland has so far blocked confiscation of the building on the basis that it would harm public health and safety. DeAngelo remains hopeful that federal prosecutors will have a change of heart. He noted that earlier this month Attorney General Eric Holder said the Obama administration would soon roll out new regulations making it easier for banks to do business with legal marijuana sellers.

Recreational marijuana use is now legal in two states, Washington and Colorado, and another 18 states have legalized cannabis for medical purposes. An initiative to legalize marijuana in California may appear on the November 2014 ballot. A Field Poll released in December reported that 55 percent of Californians support legalization. DeAngelo is also optimistic about Harborside's chances of prevailing in its fight to keep the U.S. attorney for the Northern District of California from seizing the buildings it occupies.

Matt Pappas, a Long Beach lawyer, said he successfully represented five clients last year whose property the U.S. Attorney's Office for the Central District of California was attempting to seize because medical marijuana dispensaries were operating there. "The government dismissed the cases with prejudice," Pappas said, "and in several of the cases, the collectives that were on the property remained in operation."

Pappas asserted that Haag, the U.S. attorney for the Northern District of California, is failing to follow Department of Justice policy. "She is fully out of compliance with her boss, who is Deputy Attorney General James Cole," Pappas said. "She is off the reservation." Lillian AraÃºz Haase, a spokeswoman for Haag, did not respond to a request for comment. 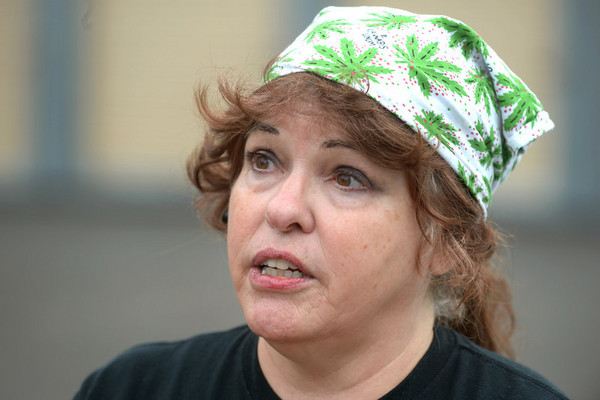