When the smoke cleared at the public meeting on a cannabis-related business zoning amendment Monday night the only people who remained unmoved by the concerns of the 25 people who showed up was city council.

Thirty minutes after the public meeting ended council approved adoption of the Medical Cannabis Business Licence Bylaw, as well as third reading and adoption of the Zoning Amendment (Cannabis-related Business) Bylaw and the Fees and Charges Bylaw amendment (development services), despite a feeling the legislation contained exorbitant fees and too restrictive measures.

But many of the five people who spoke at the public meeting were derailed in their attempts to discuss the inflated business licence fees council had set out in the bylaw, as well as some of the limitations and regulations it had drafted.

Right at the outset of the public meeting city chief administrative officer Frances Long indicated the meeting was for the zoning amendment only as it related to medical cannabis operations, not about the business licence bylaw itself.

"I thought we were going to discuss the whole bylaw," said the first speaker, Philip MacMillan, manager of the Nelson Compassion Club, which has been in operation since 2000.

"These bylaws restrict so much of what we can do in this city."

He said a lot of the cannabis business bylaw requirements – such as doubling staffing levels, increased security and setting the business licence at $5,000 per year – would add unnecessary cost to sick and dying people who require marijuana as medicine.

"I think the bylaw only creates problems and solves nothing," stated Nelson resident Tom Clegg.

"The bylaw is overly restrictive," he said. "It seems we are sending the wrong message to our young people by being so restrictive. It shouldn't be looked at as something bad because it is medicine for some people."

When the evening moved into the regular meeting arena, one councilor tried to scuttle the whole process. Coun. Janice Morrison re-iterated her position on the legalities of the bylaw.

"This is an illegal business. It is not recognized in Canada. Until such time the federal government ... has moved forward (with legislation), I feel these compassion clubs and medical marijuana dispensaries should be closed in the city of Nelson."

The sentiment was supported by Coun. Bob Adams who made a motion to defer the bylaw until the federal government regulations were complete. His motion was defeated.

In the end, city council agreed to keep the cost of a medical cannabis business licence at $5,000, a sum which 16 of the 38 respondents to a city public feedback opportunity said was too high – the most frequently expressed comment.

The $5,000 fee the city will be charging for a dispensary business licence was established to provide for the regulation of the dispensaries solely by the city and reflects the regulatory and enforcement responsibility – or the costs – incurred by the city. Some cities, such as Vancouver, charge $30,000.

"(The business licence) is a direct reflection of the amount of time and energy everybody – staff, police, council – has put into this. It is not meant to be punitive at all," said Mayor Deb Kozak.

Unlike prescription drugs and alcohol – which are regulated provincially and federally – the city would be completely responsible for regulating the dispensaries, read a city staff report to council. The bylaw will impact four city departments – administration, business licence inspector, bylaw enforcement and police – while active enforcement of regulations is not required for other businesses receiving a business licence from the city.

The primary enforcement tool for the city will be through Bylaw Notice Enforcement where the maximum penalty is $500. The bylaw does include language that indicates a maximum penalty of $10,000 may be applied as is permitted under the Offence Act – which is a general provision included in all bylaws.

Under the bylaw the city will permit the use of cannabis dispensaries in specified downtown zones (C1 and MU4), with "additional requirements limiting proximity to certain facilities and each other."

The separation limit is 300 metres east and west in the C-1 zone, and 150 m. of separation north and south in the same zone; in the MU-4 zone it would be 150 m. separation as well as 80 m. separation from schools, youth and recreation centres.

People will be able to apply to council to vary the proximity requirements in the Zoning Bylaw if necessary. The fee for a minor development variance permit will be either $500 or $750 depending on whether one or two variances are required.

There is also a cap of six licences for cannabis dispensaries in the city as council heard the current slate of dispensaries were meeting the needs of the community and region – one for every 1,800 residents. Victoria has one dispensary for every 20,000 residents.

All six existing dispensaries would require a temporary use permit, because all are too close to each other, until they can apply for a variance to stay in their respective locations. Businesses are not required to move, said Coun. Michael Dailly.

He said the regulations, while not perfect, are going to meet the city's needs until it sees some federal regulations.

"I've heard the concerns, and I do sympathize with those dispensaries that are doing more medical things ... and who feel there should be a different fee structure," Dailly explained.

"But for the sake of getting this through I just don't know how we would distinguish between the two. It seems more complicated than what we have right now.

In Vancouver there are two rates, one for not dispensing and one for dispensing, said Long.

If a seventh business was looking to open it could apply for a rezoning amendment. The number of dispensaries were limited and the distances were reduced to accommodate Nelson's smaller footprint.

The security provisions presented in the bylaw are the same as in the other regulating communities bylaws, the city staff report noted, which is also common practice in liquor stores and pharmacies.

In addition to beefing up security, cannabis-related businesses must not "allow a person under the age of 19 on the premises unless that person is accompanied by a parent or a legal guardian."

But those who wish to operate a licensed medical marijuana dispensary will be required to apply. The existing cannabis dispensaries will be allowed to continue to operate until their application and any necessary variances are considered by council. If approved, a business license will be issued.

The bylaws would be in place until the federal and provincial governments regulate both recreational and medicinal marijuana. 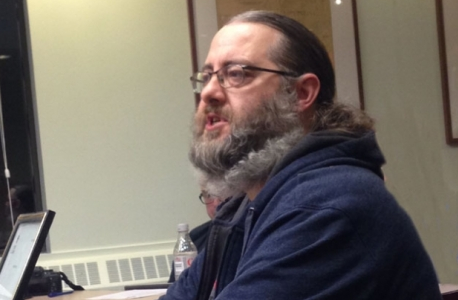