BC: Rally For Medical Pot

There were about 30 people in the park at 2 p.m., though it is unclear how many were attending the event, and how many just happened to be there.

Prior to the event, one of its promoters Jo Scofield said it was intended to promote a provincial medical marijuana program to supplement the federal program currently in place.

At the event, Scofield said she had made hand-written signs with information she says supports the case for medical cannabis.

"We decided to put some information together and come down and see what happened," she said.

"It's just a community gathering."

She said she would like to see equality of access to medical cannabis, and that people should be able to choose their medicine.

"It's just a different choice. People can really easily choose to manage a lot of the same symptoms with other medications that have a different list of side effects and possible downsides," she said.

Raylene Park, who attended the event in a StarBudz shirt but has no official affiliation with the chain of stores, said medical cannabis helps her nephew with multiple sclerosis.

"He needs it. It helps him cope with life," she said. "It takes the pain away, it helps him sleep."

Jim Park, who attended with Raylene, added that it helps with the nephew's shaking and mobility as well.

The rally comes as cities in the Okanagan and elsewhere consider the issue of medical pot shops, while it remains more strictly regulated by the federal government.

Penticton's 60-day investigation into potential regulations on dispensaries will be coming to an end in just over two weeks, while other cities, like Osoyoos, have decided on an outright ban on the shops while they remain illegal at the federal level.

Penticton city council will hear some of staff's deliberations in a committee of the whole meeting on Tuesday afternoon. 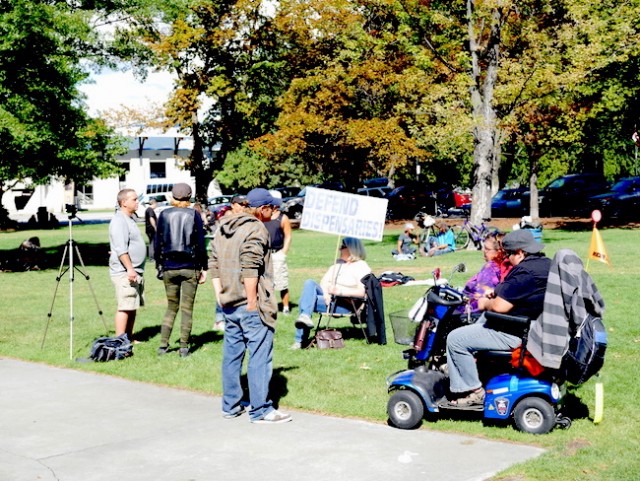 You have to start somewhere. Get out and get the info out there.
For all your Cannabis Seed needs, visit the Bonza Seedbank

K
BC: Rally For Medical Pot

Rally A Precurser To More Events