Small update:
The girls are showing that they are becomming women now as some small hairs have poked out.

This is the content of nutrients in the soil I use. It's in Swedish, but I think you'll understand it anyway. Any idea of what kind of nutrients I should soon start using?

I'm thinking of chopping one or two of these small branches of from Second Girl (the big one) and replant them. What do you think?

By the way! Go buy Beastie Boys instrumental album "The Mix-up" from 2007. It's great both as background music while smoking the best with your friends and family, or when you're really slow and want to focus all your attention on the groove. Check it out!

And, have a pleasant weekend.
/SupermanNinja
- - -
My First Grow Journal: Arjan's Haze #3 in Closet

Lookin good supermanninja. I wish I could give you advice on the nutes but I do hydro. One thing you may want to address while your plants are still relatively small is the airflow over that HID light. I don't think that computer fan is going to cut it in the long run. Just a heads-up, but great start, keep it up.
S

The present week I've had problems with watering and PH fluctuations.
Over just a few days the plants started to crave crazy amounts of water, which I wasn't ready for, so I thought that I had over watered the plants since the leaves were hanging badly. After a day and a half when nothing had changed I realized that they were not over watered, but under watered. And they were really thirsty. After some heavy watering they shaped up over the night, but some of the lowest leaves turned yellow and some of the smallest leaves on the lowest branches have completely dried out because of this. But now the rest of the plants look really good so I don't think this is too big of a problem.
It feels that short periods of dryness are a natural occurring stress that the plants should survive.

Another problem was PH fluctuations. I bought a PH measuring kit and saw that the water from my tap had a PH of 7, which was way more than it usually use to be. So I used 5ml vinegar per 50cl water to lower the PH to 6.
A first the plants got a bit chocked I think, but after a few days they are now used to this lower PH value.

But now time for pictures. They are today 39 days old and all three has shown me small white hairs sticking out, but the camera on my phone is to poor to capture such small details.

I have change the place of the plants one more. From left to right:
Third Girl, First Girl, Second Girl.

Third Girl is the only one that has been topped and has now six mayor tops.
Because of the topping the plant is the shortest and are therefore standing on a small box, which you can see on the picture above.

First Girl was from the start the smallest one but it seems that it will deliver at least one big cola.

Second Gils is the big girl of the family. Just like First Girl above but bigger in all ways.

I bought and mounted a thin glass pipe as a homemade cool tube. The fan on the side blows into the pipe and keeping the bulb cool and nice.
I can now hold the back of my hand about two inches from the glass pipe without feeling the slightest of heat.

Hey Supermanninja, under watering is probably better than over watering, they will bounce back and looks like they already have. Sweet looking bushy plants especially the two on the left/right.

About the PH I think with your water's PH it depends on the soil's PH and what the runoff is. Make sure to test the tapwater PH, soil PH (if possible - for me I only have liquid test), and the runoff PH. I read that you can have 6.5 water if your runoff is 6.2 - 6.0 , definitely not anything below 6.0. But there are way better PH experts than me here- still find it very confusing and hope to get an electronic meter to clear things up.

STAND UP FOR YOUR RIGHT

Hey m8, nice grow ya got here. Looks like there very strong and healthy!

About you PH, because your in soil you will want to stay right around 6.5 in your run off. Growing is all about your PH and how well the plant is able to pick up and eat the things that it needs to grow. Healthy roots will always make a healthy plant and because your growing in soil and cant see what the roots look like you will have to check your PH after it has had a chance to make its way through the soil.

When growing in soil i like to keep track of how my plants are feeding along with how the PH of the soil is, you can do this by first PH'ing the water with the nutes mixed in. After this you will be able to find your base PH from the run off. Now write this PH number down for the next feeding.

At the time of the feeding after that look at the PH that you had wrote down and remember that if your WATER had a PH of 5.5 per say and your run off had a PH of 7.0, you would then want to make sure that on the next feeding you drop the PH in the water nute mix to around 5.0 If you keep track of this every feeding you should be set to go. This will give you a new PH of around 6.5

This wont be perfect but its a good start to getting it right with out spending a ton of money on a digital tester.

Hopefully Cannas Terra Flores will be enough to boost the plants a bit the following four weeks and with the Hesi pH minus I can secure the pH of my tapwater before watering.

The soil that I use has a pH of 5.7 and my tapwater has a pH of 7.
What pH should my water have to be optimum for my soil?

Some new pictures taken with a way better camera.
They are today 45 days old, 27 days in flowering - 4 weeks tomorrow 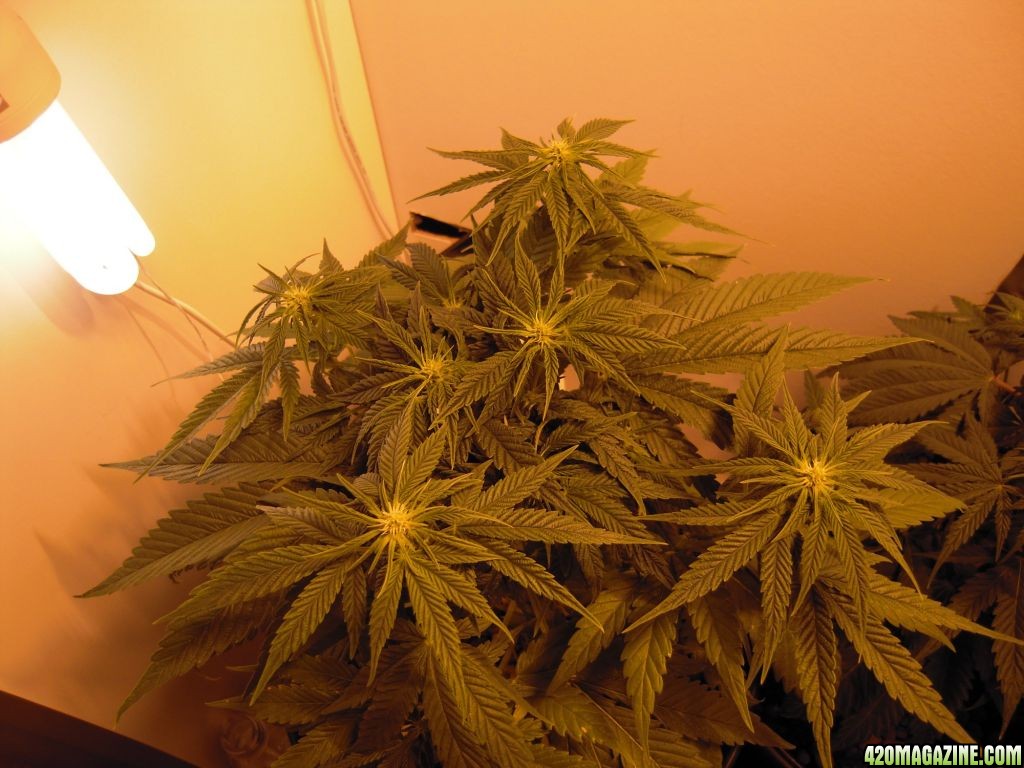 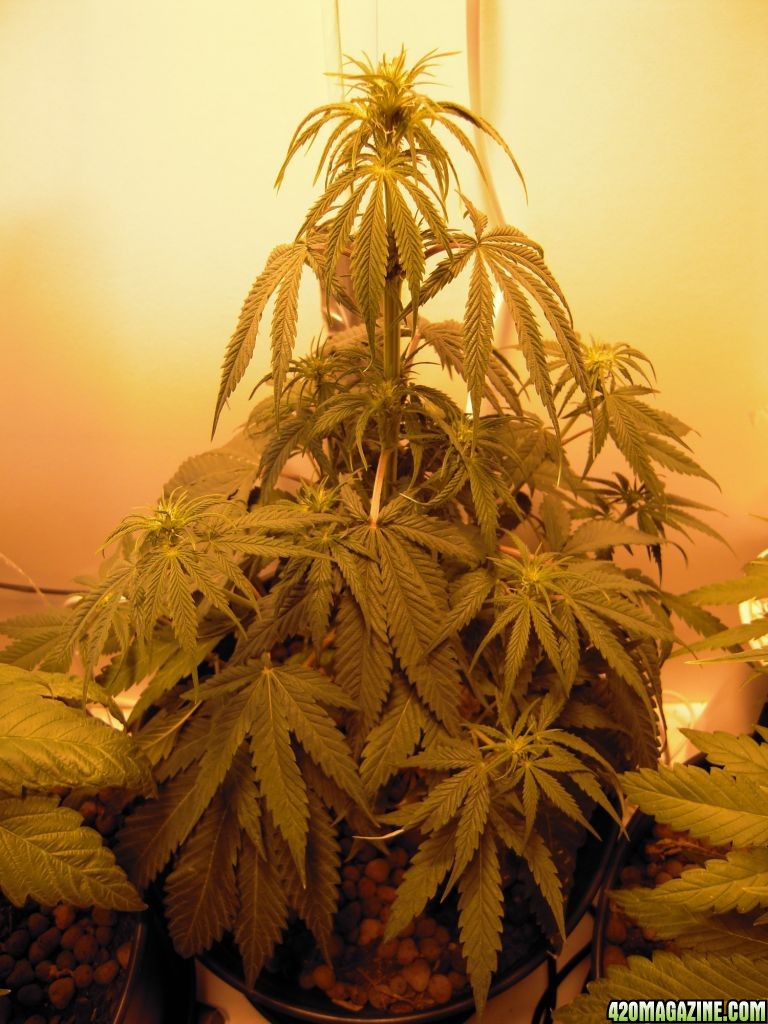 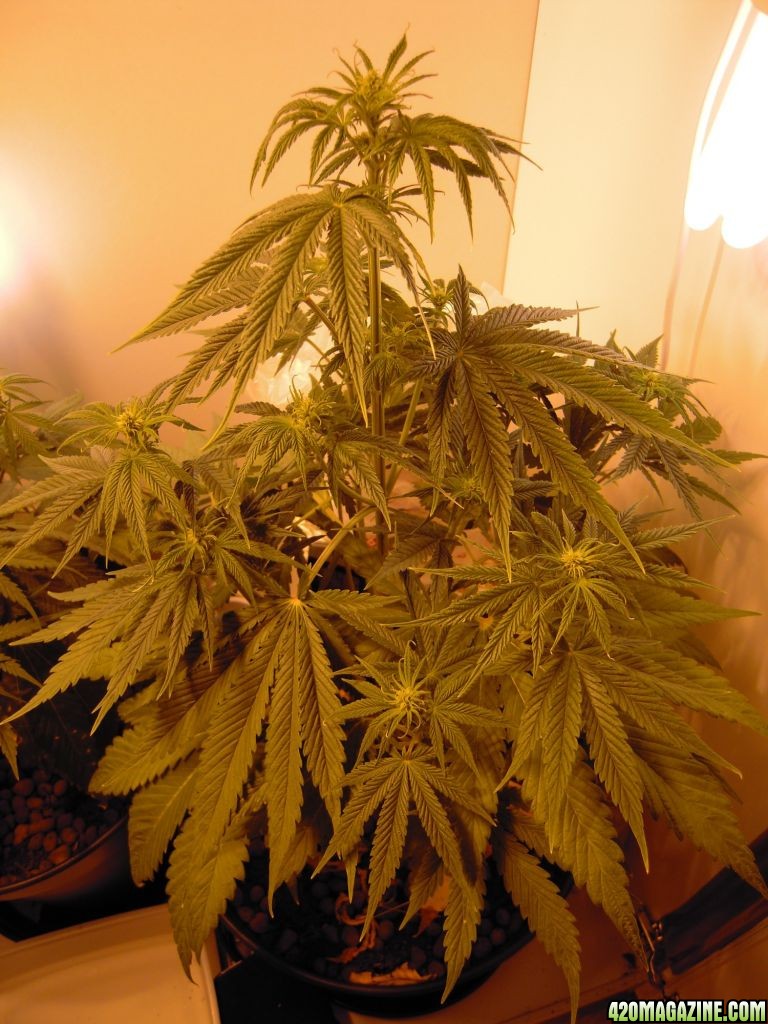 They sure are females 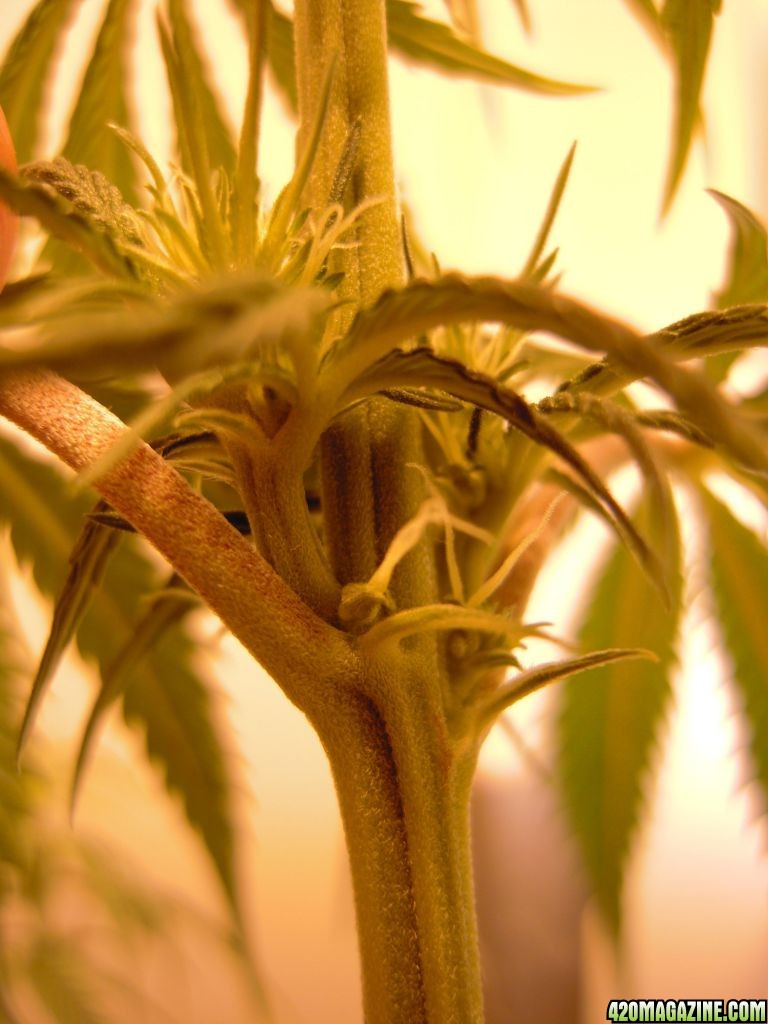 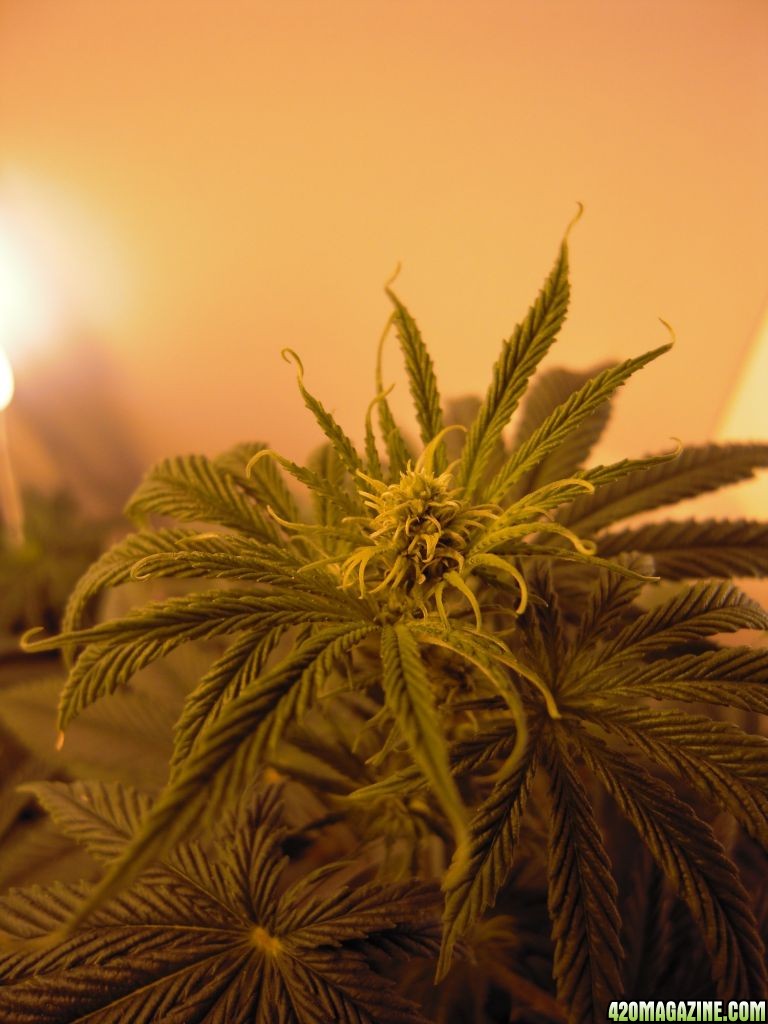 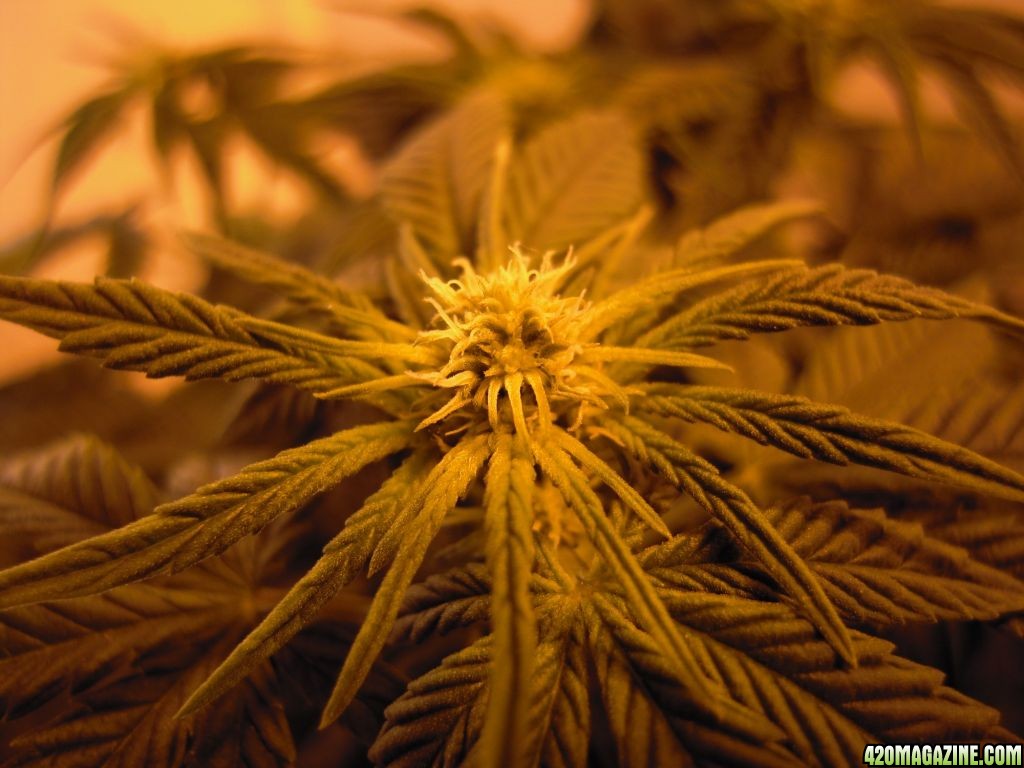 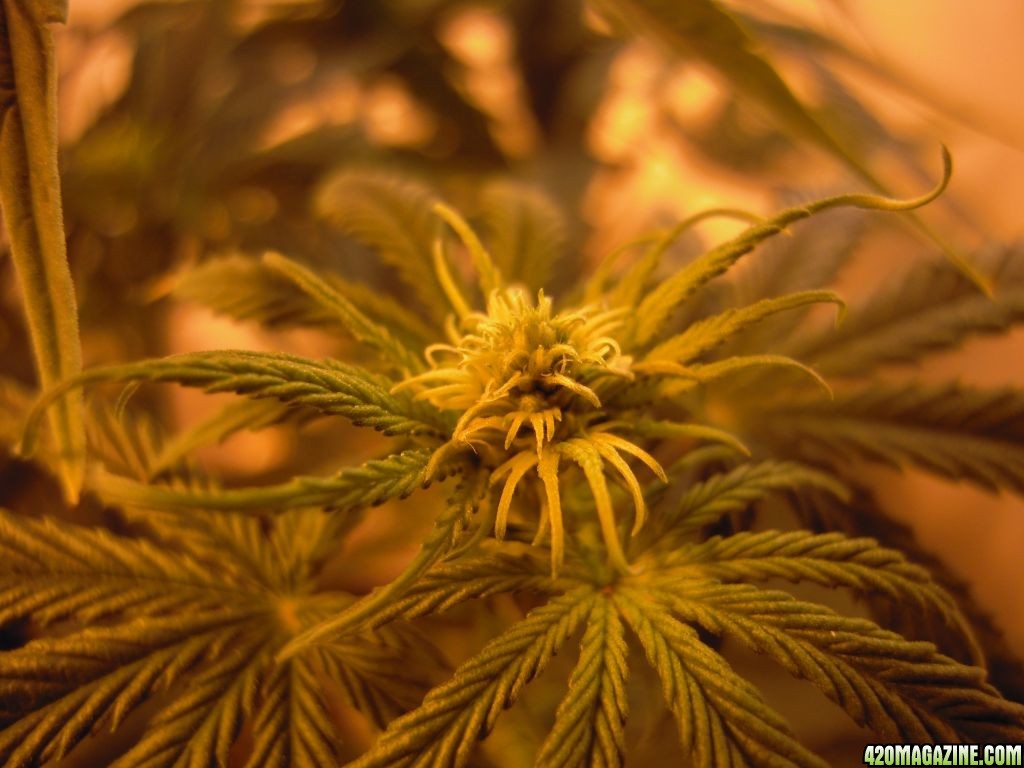 Any input on which pH my water should have to be optimum for my soil which has a pH of 5.7?
- - -
My First Grow Journal: Arjan's Haze #3 in Closet

Any input on which pH my water should have to be optimum for my soil which has a pH of 5.7?
Click to expand...

Damn them there girls are looking great and very healthy other then some normal yellowing.

Now for the PH, its simple math to figure out, take the water PH, then the soil PH if the soil PH is low then adjust the water PH up how ever much your missing. I.e. your soil is at 5.7 and your water is at just over 7 so, from here rase your water PH to 7.5/8.5 in the new water, this will allow you to stay in the PH range for soil of 6.5-7.5
S

Thank you for the kind words, I'm really proud of my children.

They flourish now that I've manage to stabilize the temp in the days to 27Â° C (80Â° F) and the humidity to 30-35 pending. The glass pipe helped a lot!


So you mean that I should not lower my waters pH, but instead increase the pH value in the water? So the "Hesi pH minus Blom" that I've bought is unnecessary?
- - -
My First Grow Journal: Arjan's Haze #3 in Closet

very nice. I'm in bruh
There are two types of people, those who are Irish, and those who wish they were Irish.
Journal In progress - Growing Cannabis Inside a Fridge
S

I still need help with the pH in my whole system. :surrender:

Should the pH be higher, lower or is it good as it is?

I still need help with the pH in my whole system. :surrender:

Should the pH be higher, lower or is it good as it is?

Soil needs to have a bit higher ph so that every thing can be obsorbed through the roots.

Normal ph run off should be around 6.5 give or take a few points as your never going to get it perfect with out spending a ton of money.

Your ph should be fine around 6 but dont let it get any lower i would shoot for 6.0 to 6.5 myself.

Thank you for the answer.

I'll measure the run off tomorrow when I've watered, but I guess the pH is around 6.

Hello again,
It’s been a while since I updated the last time because I’ve had a lot to do. But the girls are looking fine and healthy besides some lower leaf yellowing. I have now also regain control of the pH and are now watering with 5ml Canna Terra Flores and 5ml Hesi pH+ per 1.5 litre of water.

The girls are now 69 days old and have been flowering for 51 days (7 weeks + 2 days) but it feels like the buds are too small for their age. You’ll see as soon as I’ve taken some pictures (hopefully tomorrow). Or do the plants explode the last week and gain the weight that you’d expect?

Also I wonder if it’s good for the final production to cut off the lower stems that only produces those small popcorn buds to make the plant focus on the tops? Or will it only stress the plant and make the flowering take longer time? Only the opportunity to have a foretaste of what’s to come is motivating enough to cut some branches, but I don’t want to prolong the growth and/or kill the girls.
- - -
My First Grow Journal: Arjan's Haze #3 in Closet
S 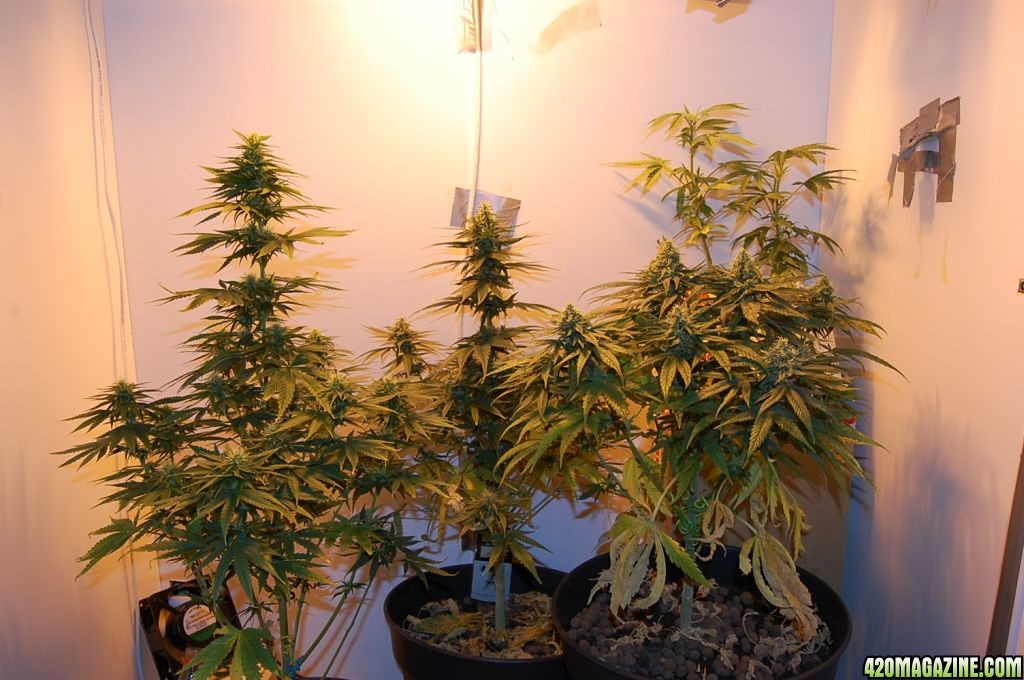 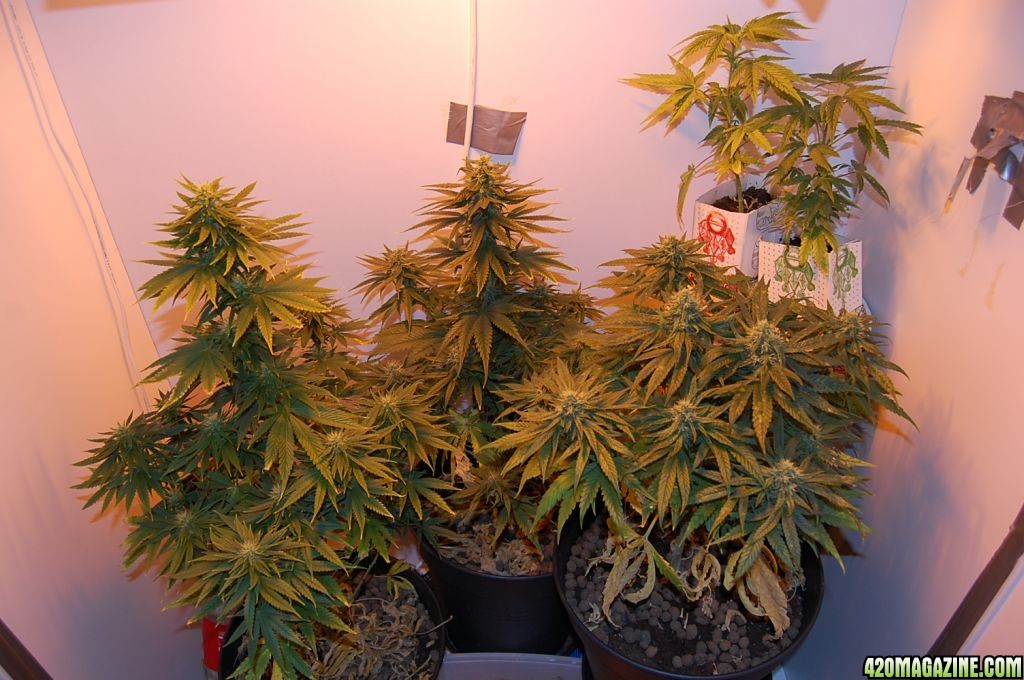 Why did the site rotate some of the pics?
Second Girl top bud - small for 52 days of flower?: 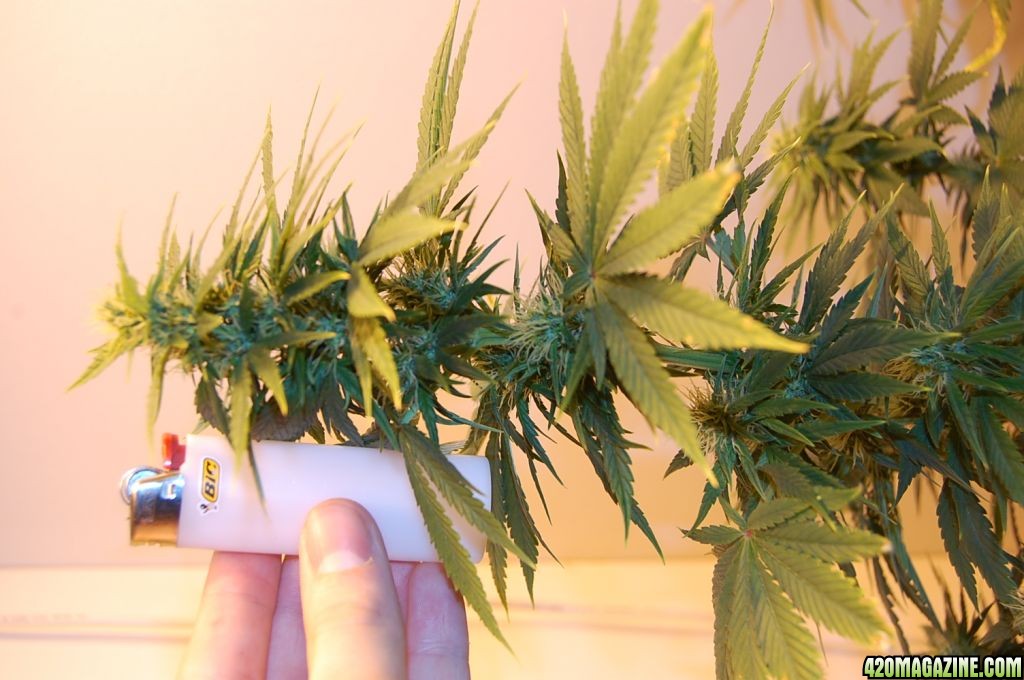 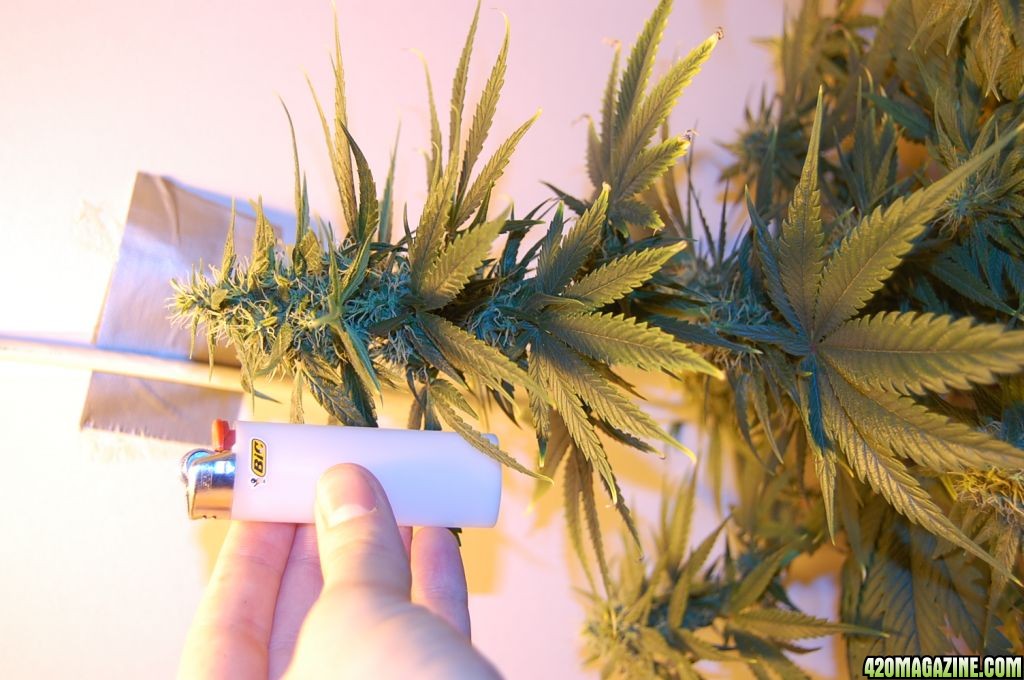 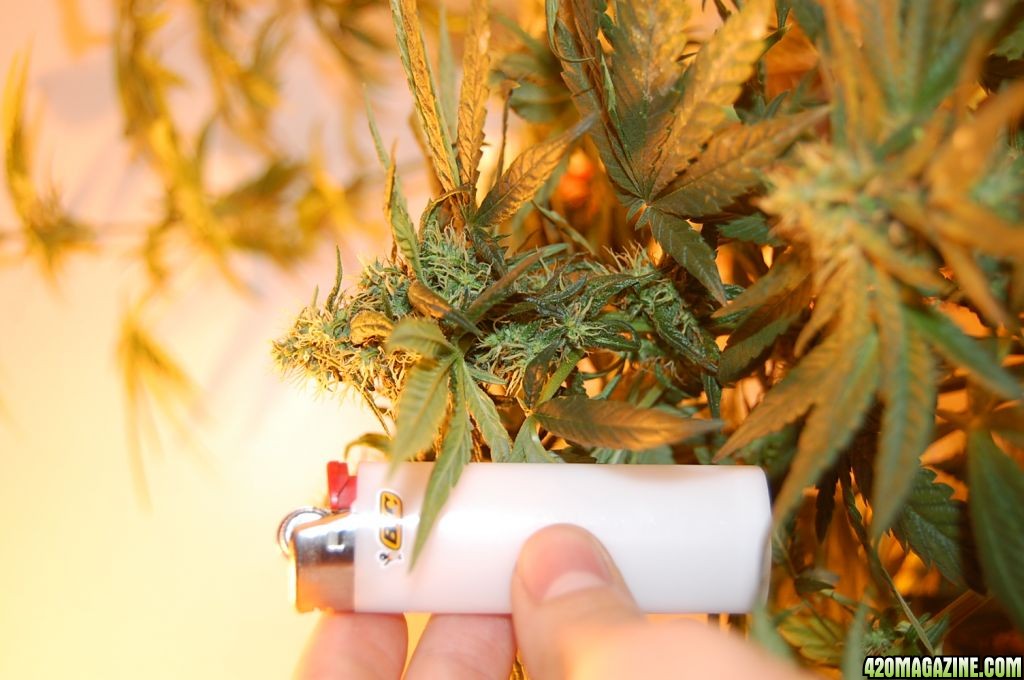 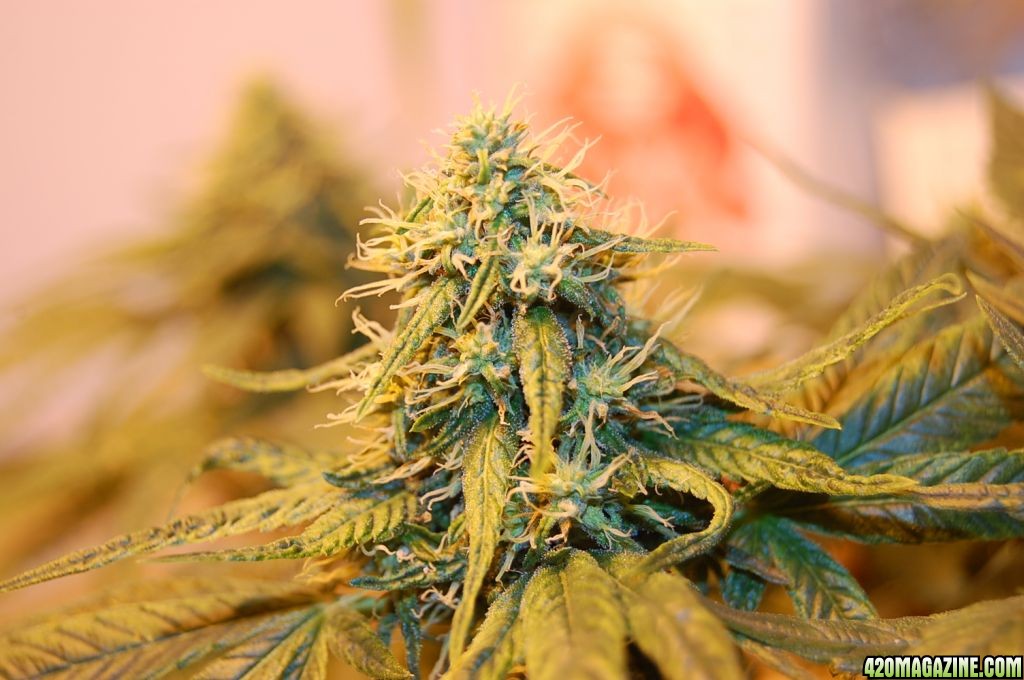 This is one of the popcorn buds that I was wondering about. Cut or let be?: 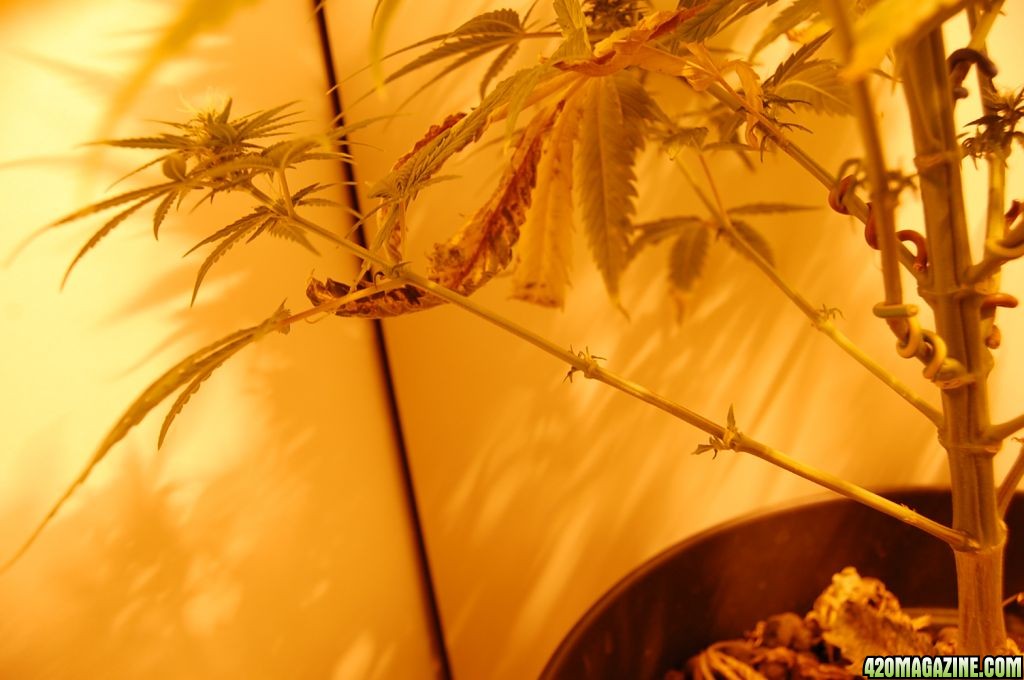 Looking nice!
If it were me I would cut all popcorn buds,I mean that branch is so long its not realy worth the effort when all the extra energey could be used for more bud growth,
But they are looking good!
New GrowBox: 2-3 Different Auto Strains - CFL Grow Diary