Iowa - A judge Tuesday gave probation rather than a prison sentence to a dying Iowa man convicted of growing marijuana and using it to treat his terminal cancer. Judge Henry Latham chastised 48-year-old Benton Mackenzie for knowingly violating Iowa law by growing 71 marijuana plants in a trailer outside his parents' home in Long Grove, Iowa. He said that growing so many plants would not be legal even in states that allow medical marijuana, which Iowa does not.

But Latham said that he was using his discretion to keep Mackenzie free so that he could receive medical treatment for angiosarcoma, a rare cancer of the blood vessels that has caused large skin lesions on his buttocks. He suspended a 15-year prison sentence – including a mandatory minimum of three years behind bars – and issued a three-year term of probation.

The judge warned that Mackenzie must be substance-abuse free while on probation, and could be sent to prison for violating that term. (Mackenzie is an Oregon medical marijuana patient and made a trip to Portland in July to try various cannabis products in his cancer fight. Oregon is the only state in the country that allows out-of-staters to enroll in its medical marijuana program.)

"You are a man with intelligence and passion. I hope you can put your efforts to a more constructive use than to continue to violate the laws of this state," the judge said. Mackenzie, who entered the courtroom in a wheelchair, told the judge that he felt he didn't have any choice but to break the law. He said the treatment from cannabis oil had made some of his tumors disappear since he was first diagnosed seven years ago. He said he felt justified ignoring laws that "take away my right guaranteed by the constitution to my life." "I have lasted seven years on a disease that takes people who don't get treated in two years. And people who go through the traditional methods, they last three years. So basically I have proven the decision I made was the right one, to save my life," he said.

He wore loose-fitting sweatpants that covered large skin lesions and appeared to grimace in pain at times. Prosecutor Patrick McElyea recommended a sentence of probation for Mackenzie, noting "his physical condition and the illness he is dealing with." The prosecution has outraged advocates for medical marijuana, who gathered before the sentencing at a park near the courthouse to criticize the prosecution.

"People shouldn't have to go to jail for trying to treat themselves," said 25-year-old Chris Davis of Rock Island, Ill., a former employee of a medical marijuana dispensary in California. Latham was also expected to sentence Mackenzie's wife, 43-year-old Loretta Mackenzie, and their 23-year-old son, Cody Mackenzie. All three were charged following a June 2013 raid at the Long Grove, Iowa, home where they live with Mackenzie's parents. Sheriff's deputies found 71 marijuana plants, growing equipment, drug paraphernalia and a small amount of marijuana in Cody's room.

At trial, Latham repeatedly barred Mackenzie from testifying about his cancer, noting that a medical necessity defense is not allowed in Iowa. Jurors in July found Mackenzie and his wife guilty of manufacturing marijuana and related charges. Their son was found guilty of misdemeanor possession of marijuana. A new Iowa law allows the most severe epilepsy patients to use cannabis oil for treatment, but it doesn't apply to cancer patients and didn't help Mackenzie. After the trial he traveled to get treatment in Oregon, one of 23 states that permit medical marijuana.

Scott County Attorney Mike Walton has defended the prosecution, saying he is enforcing the state's marijuana laws as written. He has noted that Benton Mackenzie has two prior felony drug convictions from 2000 and 2011, which makes him a "habitual offender." Walton's office recently dropped charges of hosting a drug house against Dorothy and Charles Mackenzie, who are in their 70s, stemming from the raid. 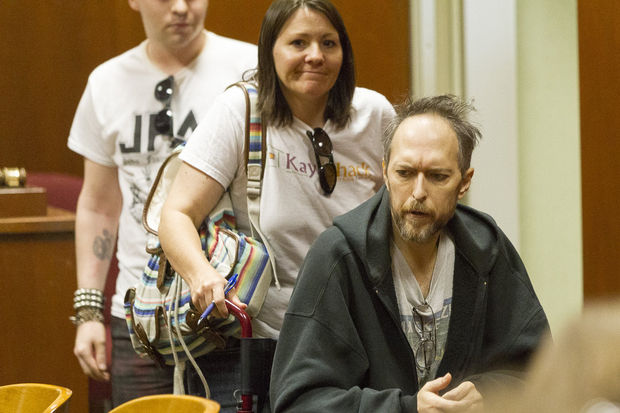 No prison time is a good start, but if he has to refrain from using Cannabis for the remainder of his probation, this is still a death sentence in my opinion.
420 Contests
Everything You Need To Grow Cannabis
Forum How-To Guides For Beginners
M

Two sayings..."Do unto others, as you would have them do unto you" secondly,"what goes around comes around" Karma to some! Maybe justice will be served up to this guy's career!

You have that right, Antics! I just got done watching Texas Buyer's Blub and it reminded me of the difficulty we, all, can have when politics means more than patients! It is, indirectly, the reason I am retired/disabled. These guys just need ti get their thumbs out of their keesters and get something done that would apply to all of us...INCLUDING A MEDICAL DEFENSE allowed in any federal, circuit, or county courtroom, anywhere in the US! That would be a good start.