BIG fan leaves covering the tinier buds underneath? CUT off or keep on?

sometime i just bend the big ass fan leaves to the sides or pinch them making them move aside giving light to the littler ones BUT in a strategic way i dont cut every single one just some....

i was wondering with huge FAN leaves that are covering buds SIDE buds or buds that are lower on the stems should i get rit / cut them off if they are covering the tinier ones? just wondering i actually forgot its been so long of what i did right last time, i super crop and twist till hearing snapping sounds n all.. and tie down main branches and all side branches in the beginning to make multiple colas and such... and honestly i used to cut them off i think the BIG fan leaves not all or alot but a few that in strategic spots covered the smaller side buds.... hmmmmm il lwait to see if anyone actually lets me know.....

I have only ever choped a few mostly bend them out the way i was always under the impression that chopping fan leaves would waste all that sugar saved from photosynthesis but from reading 420fieds journals i have seem blinding results an will be defoliating for sure!

Not sure if this will work but a quote from his journal.

420fied said:
To give you guys and gals some perspective:

These are the oldest girls lined up for a feeding just a little while ago. They were defoliated 11 days ago. Notice how they recover and produce lots of new fans. 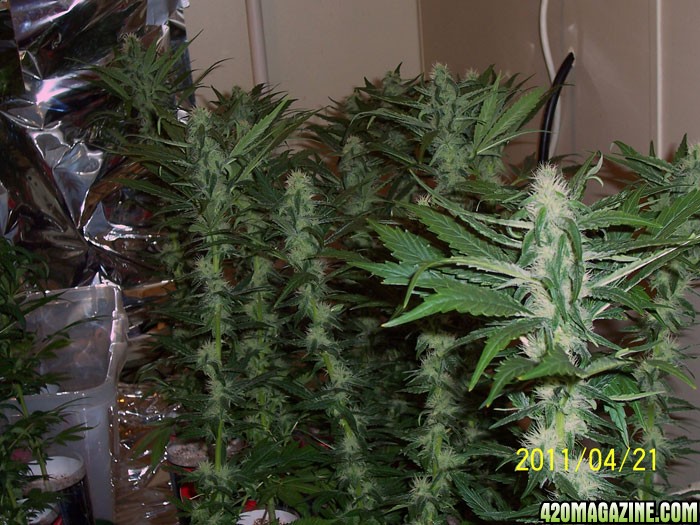 Here's a shot of a single plant to show where we are at day 32. 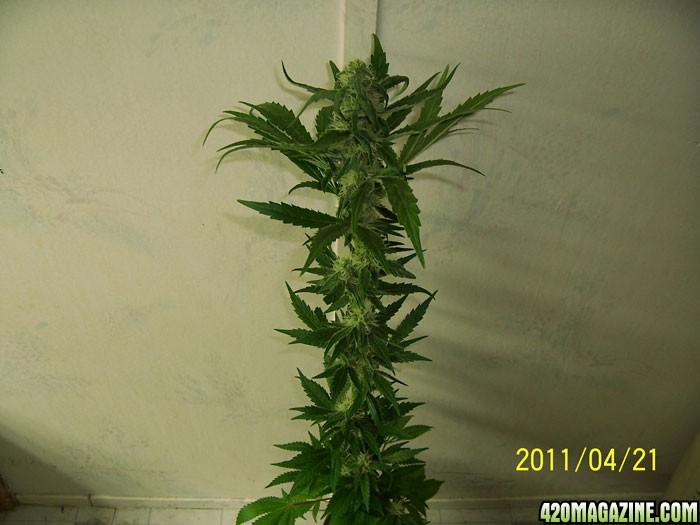 I'm looking forward to the rest of them catching up to the oldest ones.

If you start reading on this subject you'l never stop, everyone will tell you different, we need like a wee college with FACTS lol, but the best way is to learn yourself, saying that IMO i was reading loads an decided to only remove a few at the bottom half way through flowering. All the small buds at the bottom that dont receive much light didn't really change that much the whole time until you pulled the fan leaf covering it.

I dont remove ones attached to bud sites just middle an lower ones. The buds benefit because they receive more light an the plant benefits from better air circulation.

So really if they at the bottom they usually may as well be chopped imo. If they not covering anything and they healthy leave them on for the flush the plant will need them then.

But dont be afraid to open the plant a bit.

Another way is to tie it down obviously or tie it apart to let light in depending on the shape of the plant. But I'd say yeah , I think the more light the actual bud receives and all the leaves near it means bigger buds, shading buds just slows development. CHOP the girl just where needed.
JB42's Medical Grows, "Super Soil" Blue Mystic + CH9 Jack, Gone Fully Organic!!​
AK-47 - Big Bang - Blue Mystic Auto - Critical Jack Herer - Mystery seed - Soil - Complete​
Dont forget to vote for:-
Plant of the month
Member of the month
Nug of the month​
420 Contests​

yeah i do that already i had been inquiring about doing it much more often or taking MORe than usual... but i do understand i dont believe i was specific enough, mainly in my Question itr was to get ppls attention about the subject in any matter or hardcore-ness. thanx a bunch i think ill do the technique both of you had mentioned... no fan leaves commin straight outta the bud site or middle of the bud site and then take the ones covering the little-er buds underneath of halfway up the outter bud site areas....

thanks again, i had posted pics of the supercropping techniques and twisting of branches cracking/snapping tech. ...i think some refer to it as a "kyle Kushman" style or Tech.

either way it works great in providing more support for bigger colas and able to hold up heavier buddzzzzz..

but all in all you are prolonging the inevitable..they break/sagggggg eventually.... no matter what. cept for bamboo sticks for added support or osmething with wires/gardening wire holding them up/ trellis netting. or both at the same time.....

Darkshade1980 said:
sometime i just bend the big ass fan leaves to the sides or pinch them making them move aside giving light to the littler ones BUT in a strategic way i dont cut every single one just some....

i was wondering with huge FAN leaves that are covering buds SIDE buds or buds that are lower on the stems should i get rit / cut them off if they are covering the tinier ones? just wondering i actually forgot its been so long of what i did right last time, i super crop and twist till hearing snapping sounds n all.. and tie down main branches and all side branches in the beginning to make multiple colas and such... and honestly i used to cut them off i think the BIG fan leaves not all or alot but a few that in strategic spots covered the smaller side buds.... hmmmmm il lwait to see if anyone actually lets me know.....
Click to expand...

everyone's got 'proof' that they're right.

for me, I tend to trim off the lower leaves when I feel like they're holding up the growth, but most of hte time, they'll just fall off without being any trouble, so why mess with them??

The KEY word in my questioning was "Strategical" or "strategic" ...not just randomly cutting Chopping hacking away at leaves, ...just a certain particular type of leaf growth and if it bothers the growth of the little buds underneath of a few, or select few..thats all i do appreciate everyones answers/comments/suggestions.... and your right, everyone will have a different BASIC way/version from their own point of view and grow room setting as well as Different types of strains..and ways they "trained" the plants to grow E.G.-Super cropping, lame way- by just letting them go.... , or not bending them over.... or making one big ass stick..lol...either way the information about cutting the big fans away giving light to the smallies underneath is still a good suggestion i just wanted to know because honestly i had utilized this type of method before on one grow and not used it before on an outdoor grow since the sun was much much more powerful...no need to cut away growth ....

so thanks a bunch i just needed to recall and remember by other peoples suggestions of what ive done before in tha past.
H

Be reluctant to remove them.

I generally let the plant dictate what leaves are expendable. I find that when one of my plants reaches around 6 weeks of flowering, the plant begins to shutdown many of these leaves. The first to go are usually the ones covering a bud site. I have observed this behavior so many times over the years now that I will often cut these bud covering leaves off ahead of time to give those lower buds more light. Seems to have only helped grow bigger and denser buds all the way down the entire plant!

just what i suspected/thought, thanx again!

.... had just removed only three leaves out of the 9 fems i have in my basement so no im not just randomly removing

and yeah i actually like it when around the later weeks or near the end when the big ass fans and mediums die off /turn yellow and then just naturally fall off...kinda cool and it reinds me of Fall ....

fun times, i also like pulling down on the ones that are yellow but still held onto the stalk/branch..i guess its like a scab for SOME people.... always messin and picking at it ya know? lol! its true admit it....

Cool! Glad I could help!

As I said, if you observe the plant, you will eventually realize that the leaves turning yellow are not random. There is a method to the madness!

A few years ago I took 2 identical plants (clones) and started to flower them. Both grown in soil and Scrog. After the stretch period of bending under the screen I let one plant just grow and did not do much of anything except bend a few wild branches into a more open area.
The other plant I cut most of the big fan leaves (about 75%) and trimmed the smaller leaves around the tips of the branches.
Compared to the other plant that I let go the branches grew much longer.
I continued the cutting off of fan leaves when they would reach about 3 inches in diameter and I would trim the smaller leaves around the tips of the branch to about half of the leaf size.
At first the trimmed plant looked scraggly and ugly while the other plant seemed to be big, bushy and healthy.
Near the end of the flowering cycle however you could tell a difference, with the untouched plant it was still big and bushy, however most of the nugs did not fill out very much. On the trimmed plant it had long branches with big thick nugs, I still use this practice today in my hydro system, however I usually only remove about 60% of the fan leaves early in veg state and trim about half the cola leaves once flowering begins, then towards the last few weeks I don't cut anything but will bend bigger leaves out of the way if possible. this seems to be my best recipe for growing big thick buds. you can check out some more of the results in my picture gallery
Last edited by a moderator: Oct 17, 2011

cut off fan leaves in scrog ?

Do i cut the fan leaves off?