Bill Would OK Use Of Cannabis Supplements In Utah

Makers of "hemp supplements" would be free to ship to Utah buyers their extracts, oils and pills – at least, the kind that can't get people high – under soon-to-be-released legislation. Hemp, marijuana's non-intoxicating cousin used to make rope, lotions, textiles and food products, is already freely available (with no restrictions or age limits) at retailers throughout the state. But the nation's patchwork of marijuana laws prohibits medical marijuana producers from shipping across state lines – a hurdle that Rep. Gage Froerer, R-Huntsville, has promised to address.

Froerer, the lawmaker who once pushed a ban on synthetic marijuana, or spice, was moved by the plight of parents of children with epilepsy. Cannabis oils high in cannabidiol (CBD) but low in tetrahydrocannabinol (THC), the chemical that produces a high in users, have been shown to have powerful anti-seizure properties. But, to obtain the oil, Utah families must move to states like Colorado, where medical marijuana is legal, forcing many to leave jobs and social supports behind.

Froerer's bill, which is expected to be numbered and released this week, would permit any health consumer of any age in Utah to buy CBD supplements without fear of prosecution – after meeting certain requirements. Those strings would likely limit access to epilepsy patients, at least temporarily. "My primary objective was to get access to these moms," said Froerer, referring to the grass-roots group, Hope 4 Children With Epilepsy. The bill would allow only finished hemp products to be brought across state lines, not raw hemp in its plant form, and only those products with less than 0.3 percent THC by volume.

Cannabis products favored by cancer patients to ease nausea and pain or to reduce intraocular pressure in people with glaucoma tend to be high in THC, said Froerer. The bill would further require consumers to obtain a physician's signature and a waiver from the Utah Department of Health before legally purchasing CBD supplements. Children under 18 would also need a parent's consent.

"The only evidence I've seen is that CBD oil is effective for some forms of epilepsy and seizures," Froerer said. "But if research shows it works for other health problems, that's great." His measure contains no quality-control mechanisms to ensure THC limits aren't exceeded, leaving it to consumers to scrutinize manufacturers' claims. But that's the case now with CBD oils sold on the Internet, all with different CBD to THC ratios and prices. Hemp-based beauty products and foodstuffs found on Utah grocery store shelves – including hemp milk or hemp seed, a high-protein snack for sprinkling on yogurt or salads – aren't held to labeling requirements disclosing how much THC they contain.

Froerer said researchers at the University of Utah are analyzing the potency of several CBD oils. He hopes to share the findings when his bill is first aired before a committee. Under his bill, Utah's health department would survey hemp-waiver holders to help document their chosen supplement's effectiveness. Their identities would be kept confidential, in line with federal patient-privacy laws. The agency would be encouraged to charge a "reasonable" fee to cover its costs, making the measure budget-neutral, said Froerer.

Substance-abuse experts haven't opposed it outright but have voiced concern about the unproven benefits and safety of "artisanal" cannabis oils, which aren't regulated by the U.S. Food and Drug Administration. "We feel the public discussion has gotten away from the research findings and focused on the emotional difficulties parents of epileptic children are experiencing," wrote Utah County Drug and Alcohol Prevention Director Pat Bird in a guest editorial in The Salt Lake Tribune.

Bird fears marijuana growers, which he refers to as "big marijuana," are exploiting epileptic children to push a larger legalization agenda. And he believes any step toward decriminalization sends the wrong message to youths, that weed and pot are harmless. Froerer and Hope 4 Children With Epilepsy say they have no connection to the marijuana movement. Nevertheless, public opinion and the legal landscape on marijuana are changing rapidly in America.

A federal farm bill, approved Wednesday by the U.S. House and expected to pass the Senate, would allow colleges and universities to grow hemp for research purposes in 11 states that permit growth, including Colorado, Montana and Oregon. Hemp and marijuana are the same species of Cannabis sativa, but hemp is cultivated to be low in THC.

The farm bill defines "industrial hemp" as "the plant, and any part of such plant, Cannabis saliva L. ... with a delta-9 tetrahydrocannabinol concentration of not more than 0.3 percent on a dry weight basis." The federal measure means little to Utah, Froerer said, except that "it takes away any objection that we're bumping up against federal law" with his bill. 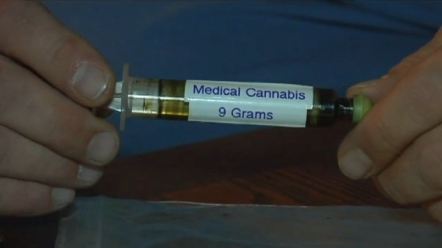 T
Bill Would OK Use Of Cannabis Supplements In Utah