Greetings and All the Best to my buddies at 420 Magazine!

This journal will be for my grow effort using seeds I created last grow. This is my first time to create seeds so it’s exciting. I crossed Northern Lights x Skunk last year, there are some pictures of the parents in my last journal. This journal will help with my future grows and might be interesting to others too. I have some other crosses to try with later grows.

Comments are always welcome, I’ve gotten some great insight in past journals and an encouraging word always helps a lot.

Sometimes more than people realize. Thanks for peeking in.

This is my third year growing indoors and I’m still learning and developing my technique. I’ve been growing outdoors, casually, for six or so years. I’m getting more sophisticated each time. I do a lot of gardening, everything organic. This is my third journal, and each has been pretty spotty. I plan for this journal to go through harvest of one batch of seeds from seedling to harvest.

Hi
What a combo! I really need to be watching this.

That’s it, pretty simple. I’ve grown in perlite/moss also but light soil is comfortable for me, its a good medium for organic growing and drains well enough to not get waterlogged. The plants seem to do best if they need water twice a week.
The environment here is cool and damp most of the time. The tent is in my unconditioned back room. The lights keep it warm nicely.

I am not sure if I will take grow out the plants all the way to flower or if I will take cuttings, sex them, and then use cuttings for flowering, maybe SOG style. The latter is more exciting and I’ll have some mothers for next year, but it’s more work. If I can manage it, that’s preferable.

You have a good set up, ideas for two ways... Go with what your gut tells you when it is time

I have a few organic home made stuff in my journal. First post

Welcome, @AngryBird, thanks for the reference. You have some good info in your posts, we are going down similar paths.
B

We came here for pictures! Here are the babies that are what it’s all about... 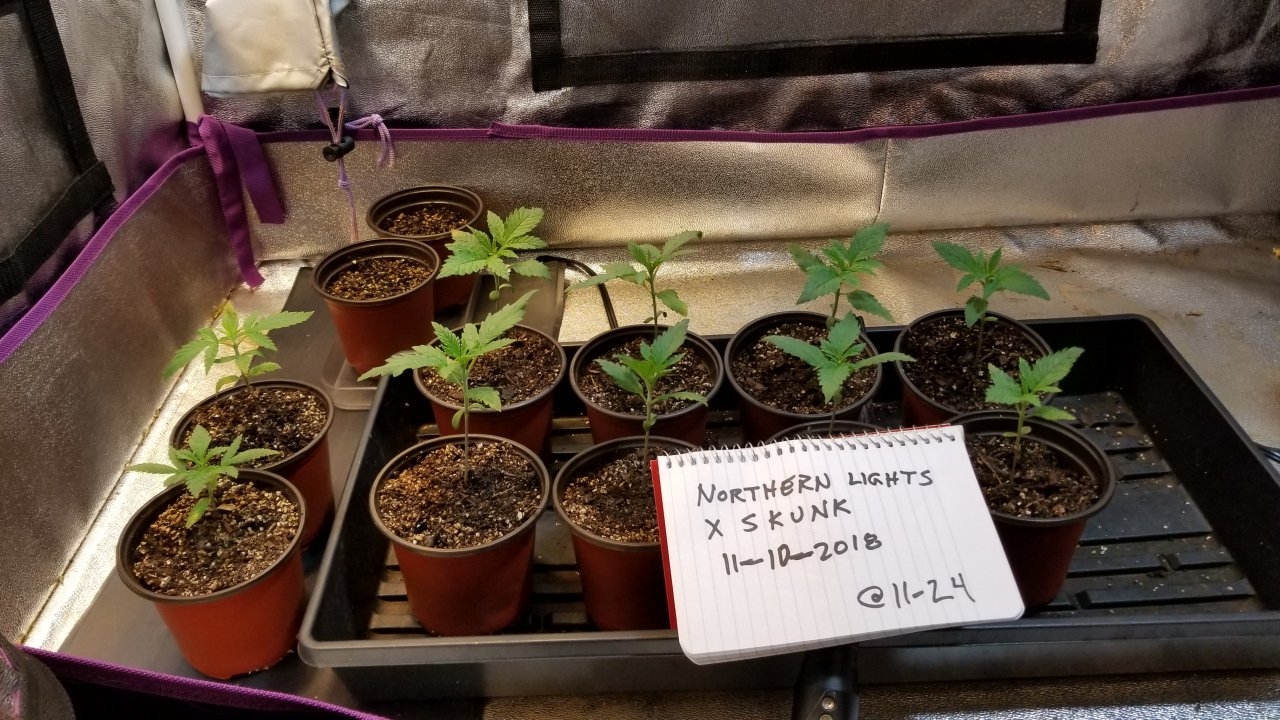 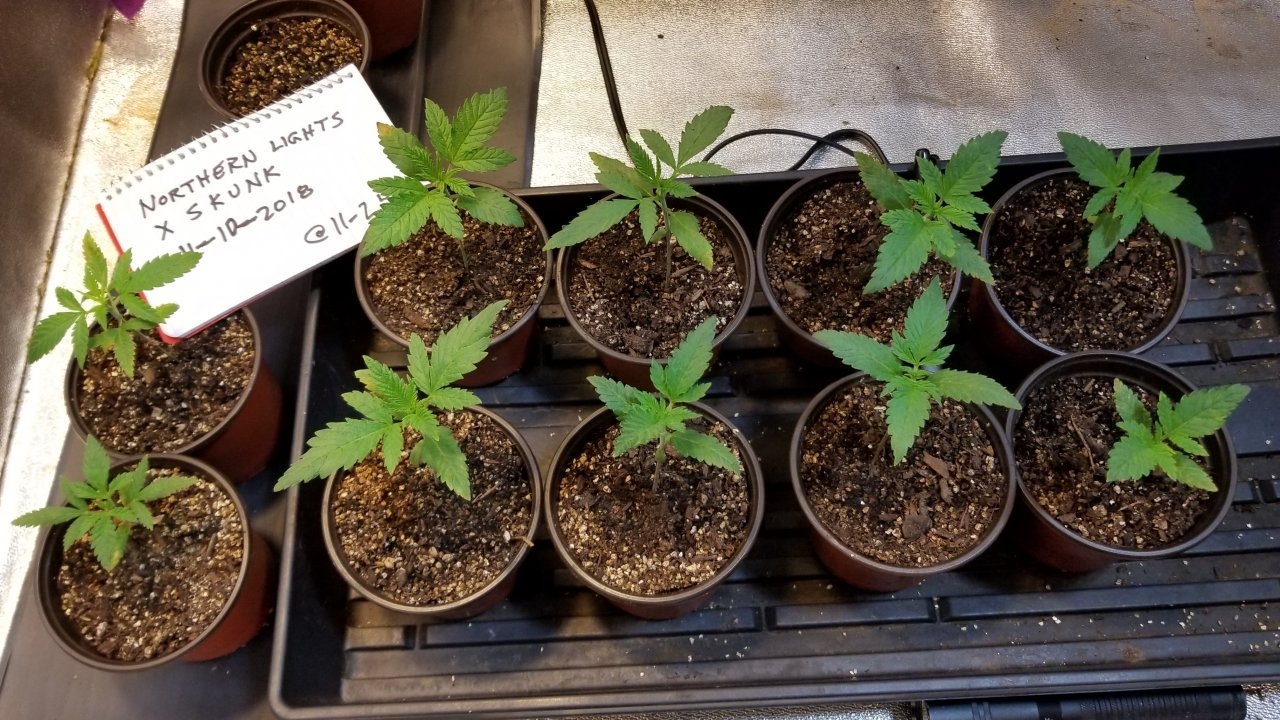 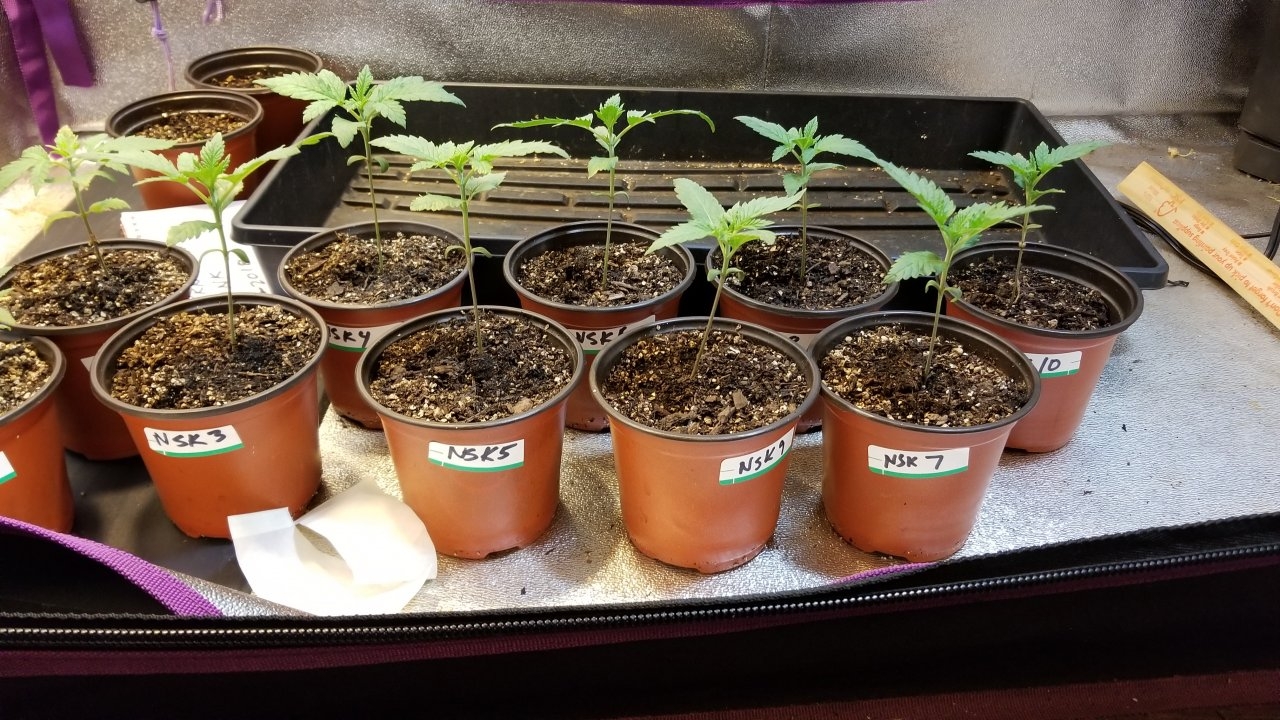 I just started the journal and I’m weeks behind in my posts.

These seeds were started in wet paper towel until a bit of tap root emerged, then into the soil. The seeds were chosen at random from the collection, 8/10 germinated within less than a week. That’s the rate of the parents. I used a warm seed mat set to 74 deg.

The seedlings are more uniform than the parent skunk which showed a lot of variance. Also the leaves look more rounded, which favors the female parent. The Northern Lights mother looked more Indica.
The seedlings shot up and had very small first true leaves, similar to the skunk,so they are showing a bit of both parents, and some good hybrid vigor.

I don’t have pictures of the younger days so I’ll describe their short history.
Last week they looked terrible. The two smallest plants sprouted outside in the pots I bred the mother and I transplanted them and brought them in. Of course they had bugs. Little white round bodies, moving about, probably aphids. Smaller less active, maybe thrips. Some gnats too. Etc.

I thought the whole batch were goners. They were completely losing color in the upper leaves, the new leaves were almost white. Yikes.

I sprayed with weak neam+detergent two days in a row then a week later the same mix with some 5-1-1 fertilizer and a pinch of dolomite for cal mag. Aerated compost tea every watering. Now they have recovered and have a nice even green.

The first two,smallest ones from outside, definitely are a bit stunted but are looking good. They are labeled NSK 1 and 2. On the far left in the pic.

You can see some leave damage from the foliar spray on the tips of a couple, my bad. I do that a lot, I wonder if others have the same problem, or if I am mixing it too strong. I always test the pHusing test strips. Maybe I need a dissolved solid ppm meter. I’ll post a question on the growers forum. Also I’d like to find a good liquid fertilizer that isn’t too stinky.

How far away fis your lights?

Seeds, seeds, seeds. Here are the seeds from last years grow. If they’re any good, I should have plenty of skunky grows in the future. Easy and so much more affordable.

I grew 10 skunk and picked the best 2 males for breeding. I crossed those with three different mother strains. The seeds came out different in size, color, texture. The NLxS are large but a little light colored, I was concerned about the color but they’re starting out vigorously.

I picked skunk to start with my first breeding since it’s the oldest hybrid and has been crossed with everything successfully it seems. If there was a stable inter bred line, it’s skunk. I am concentrating on Indica for my outdoor grow due to its early quick harvest. Start with the classics and build. 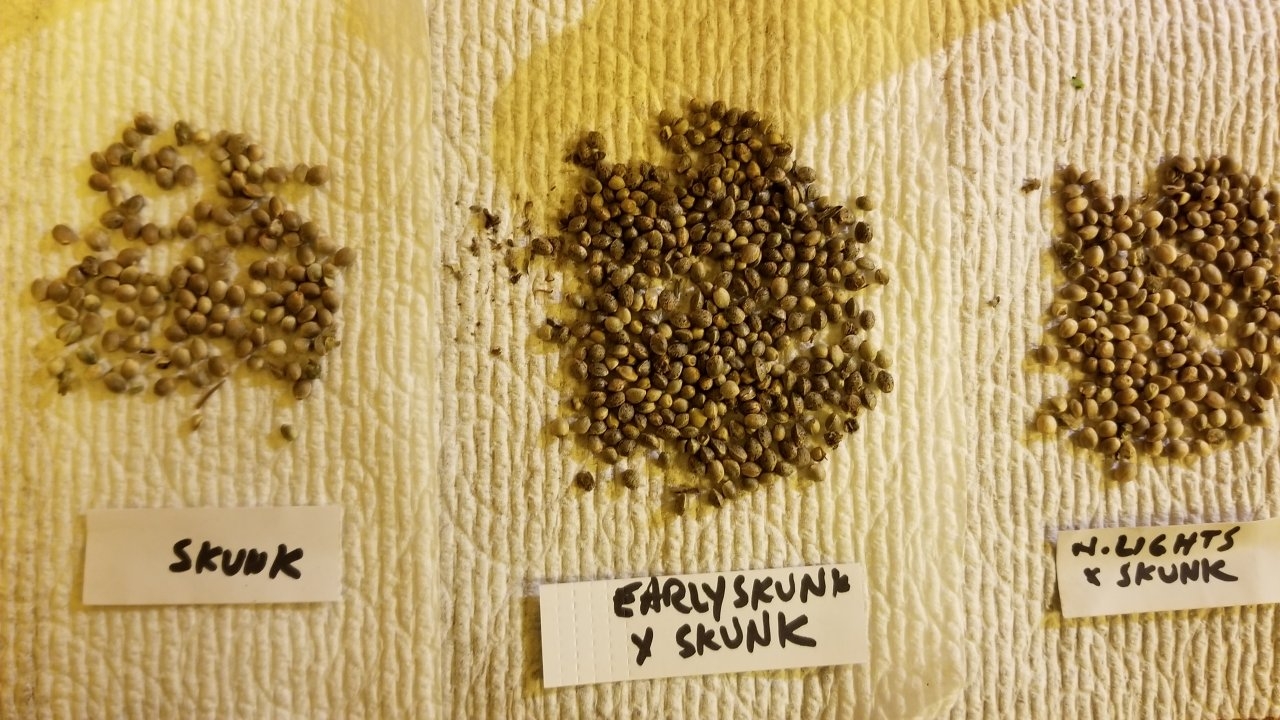 These little seedlings sported up from seeds that made their way out from the mother before I could get them. Considering how cool the weather is, and that I have given them no encouragement or water, they’re pretty hardy. Funny, the seeds inside, i dote over them, keep the conditions perfect, and these outside just pop up as pretty as you please all on their own. Weeds, huh 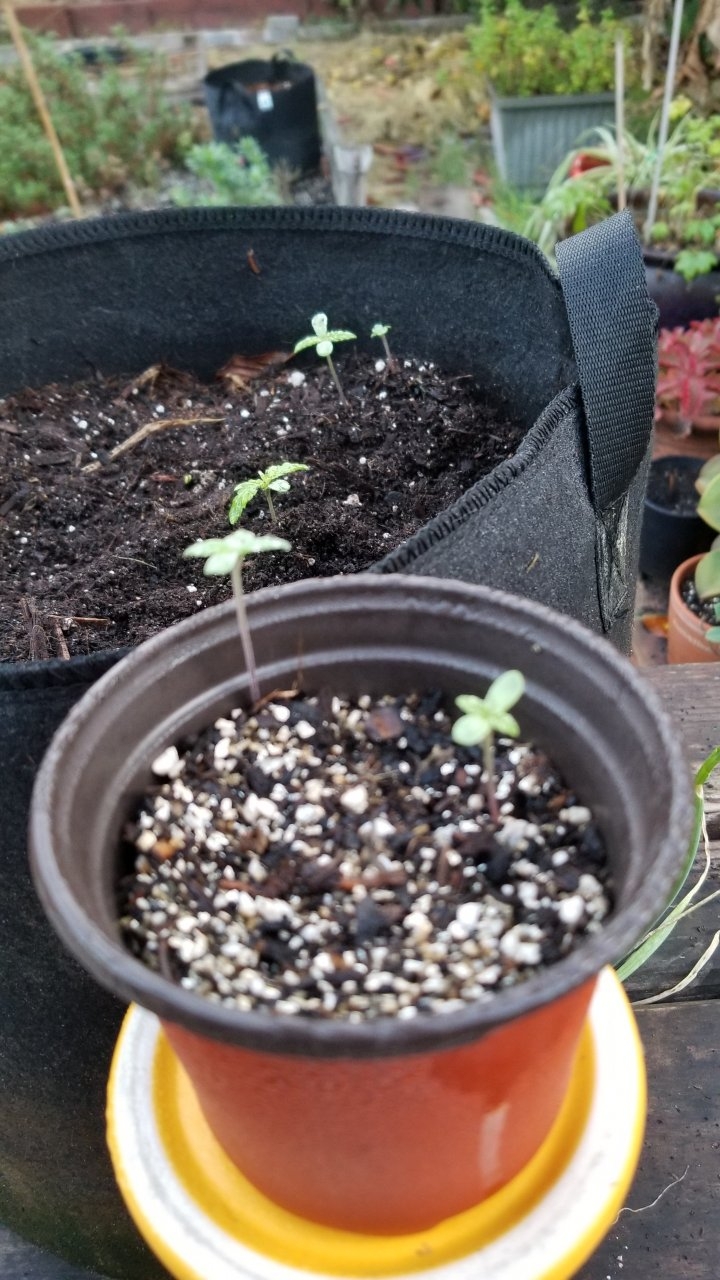 Wildcats! Some skunk hybrids seeds that fell into the mother soil and have sported.

Ok, looked at your avatar... Had to check out where you are..
I used to wear those shoes always... In the winter with knitted thick wool socks.. Lol
You reminded me of young days in Sweden

Slowpuffer said:
Good luck with the seeds, I've always wanted to do that.
Click to expand...

It’s super easy and so far no problems. It’s great to have a supply of seeds for pennies. There’s no reason they won’t be good quality.

Not Swedish style, my style lol

Growing up in sunny hot Florida, i rarely wore socks. That’s almost the opposite weather while sharing the Atlantic Ocean. Now I live where it’s cold enough for socks everyday. Too cool.

Sea of green. That’s my goal now. Another tent is my manifest destiny.
My plan is to flip the first batch into flower as early as possible and start another wave right behind it. To do that I’ll set up a second small tent for veg, 2x2 is what I have room for.

Here are the seed starts. They’re growing well. I wonder what’s the earliest I can flip them the end of next week looks possible. I don’t want to let them get too big. 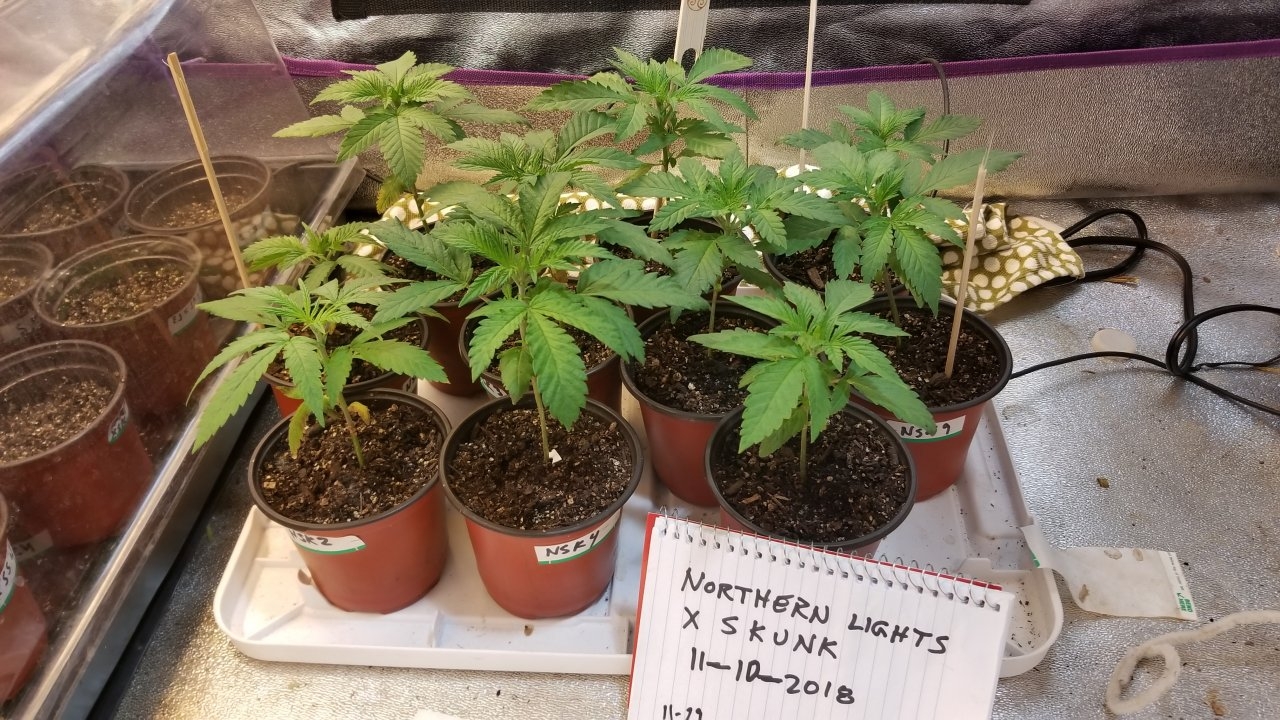 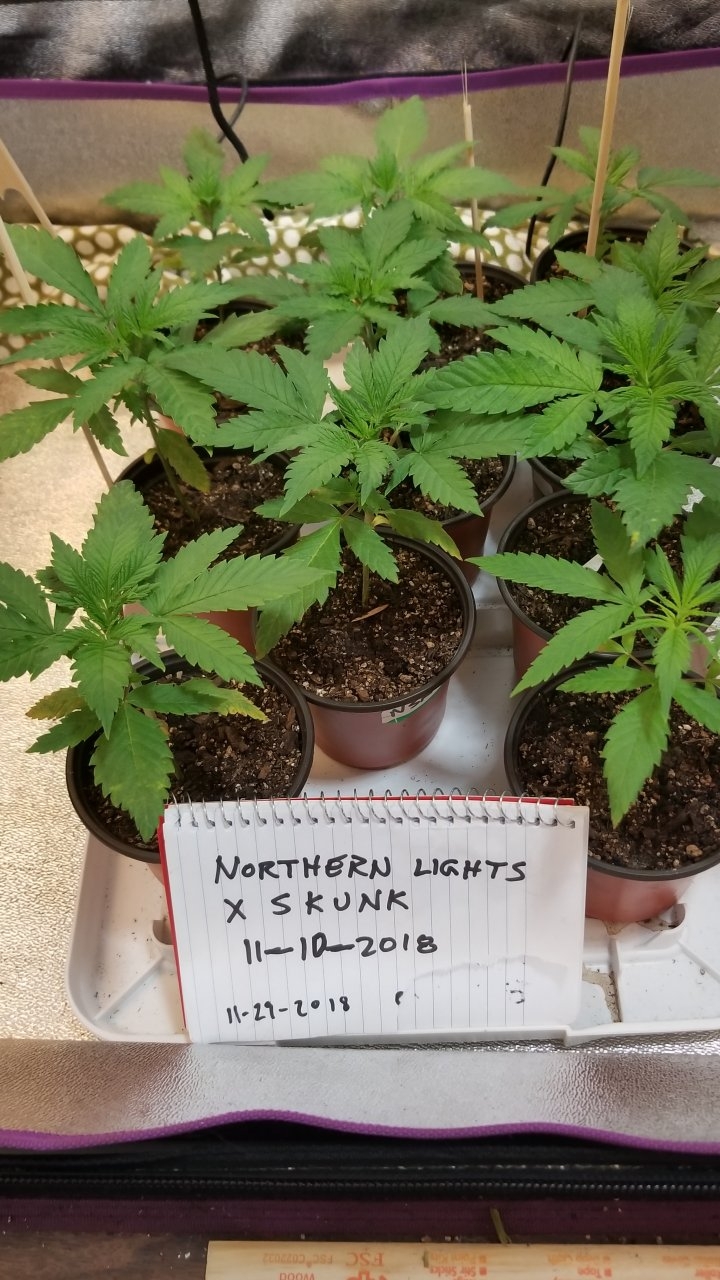 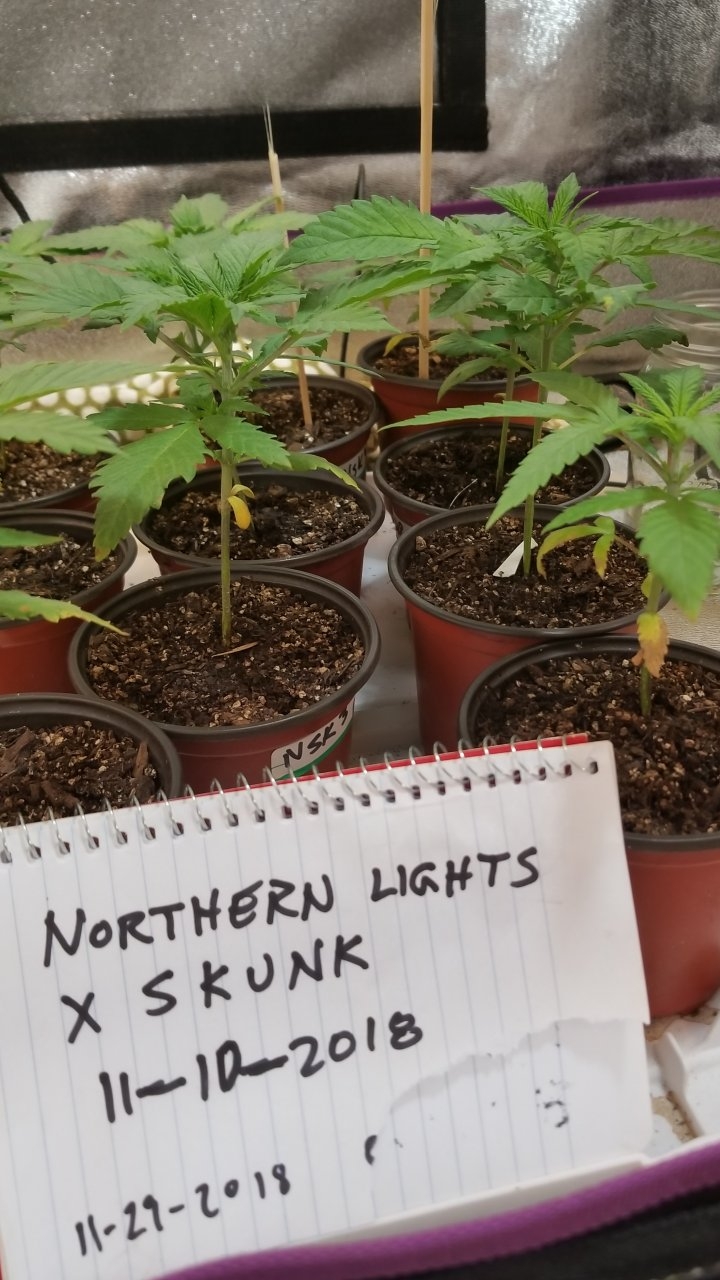 Northern Lights x Skunk three weeks old
Here is the next batch, 6 early skunk and 6 skunk. As of this morning 9:had sprouted,within less than 2 days, so they are starting off well. 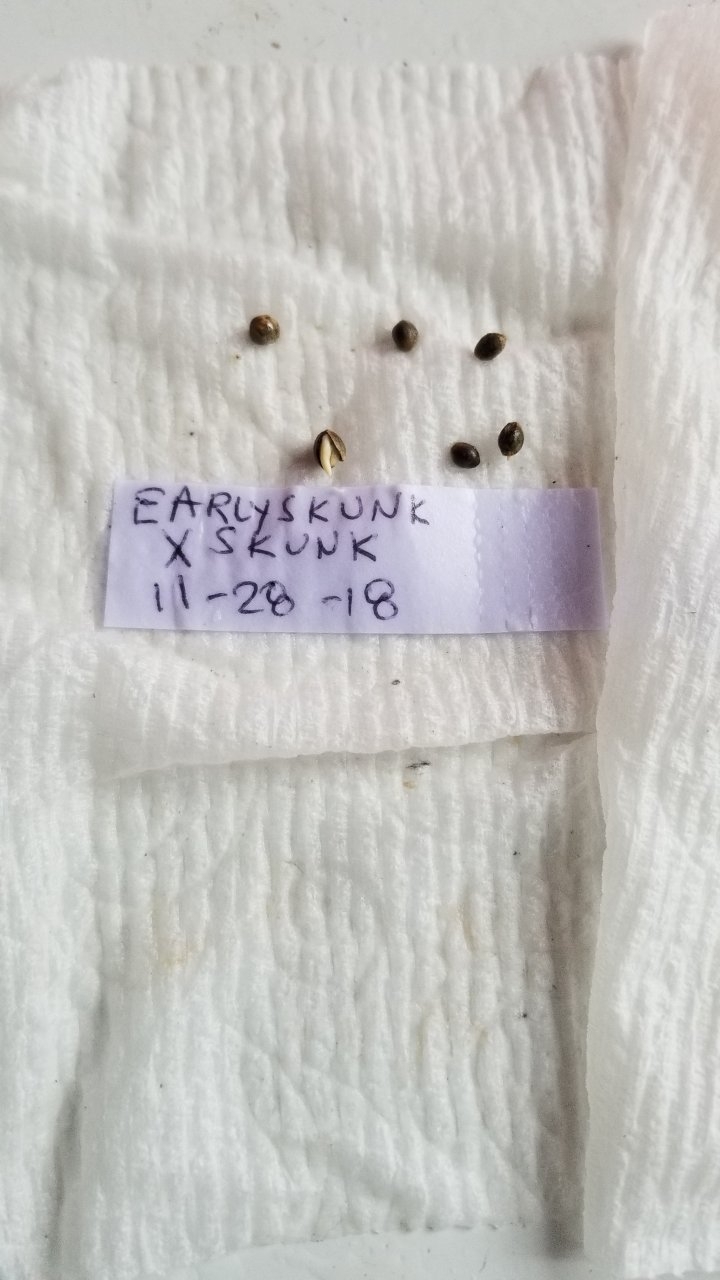 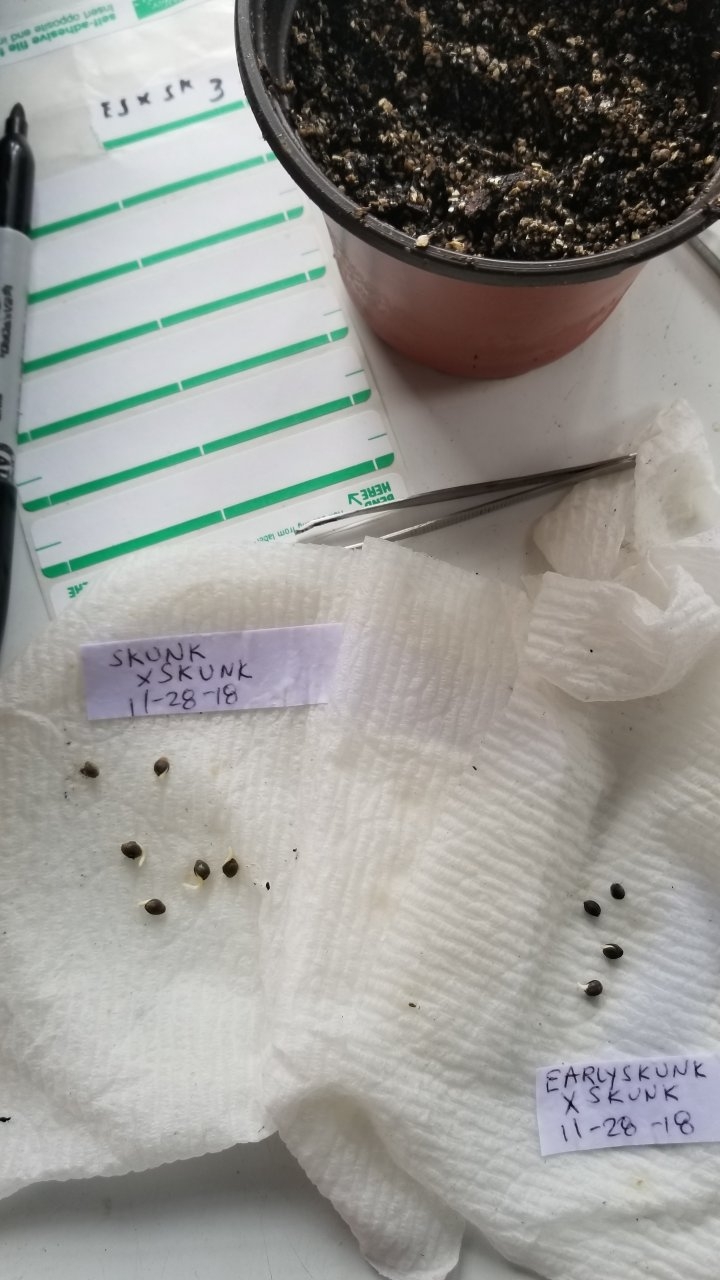 Hope everything is going well to all,

Can't wait to see that