Decades of debt are pushing Jamaica to cash in on its most famous exports, but small farmers fear losing out in the rush to market medicinal marijuana. When Bob Marley and the Wailers first performed Get Up, Stand Up to a restive 1970s Jamaica, never could they have guessed that the government would be cashing in on their lyrics, their Rastafarianism and even their spliffs 40 years later.

But decades of debt, coupled with a crippling austerity package instituted by the International Monetary Fund, means that nearly everything that makes Jamaica famous today — including Bob Marley, Peter Tosh and ganja — is up for sale.

The government is aiming to recoup roughly $20bn (Â£15.4bn) per year in potential lost revenue by capitalizing on "Brand Jamaica" and the culture associated with it. Taking California's billion-dollar weed market as inspiration, Jamaica has repealed draconian legislation and punitive jail sentences in an effort to turn its thriving illegal ganja industry into an internationally recognized, medicinal marijuana one. "Green gold", as politicians now term it, "is too valuable to go up in smoke".

Yet, just like in Marley's day, many fear it is the small man who will lose out. Jamaica is home to more than 180,000 registered farmers who grow traditional crops such as tomatoes, tobacco and bananas, and research suggests nearly all of them grow marijuana on the side. Since the country's medical ganja scheme came into effect in 2015, however, only 25 applications have been made for marijuana cultivation licenses.

"A lot of the subsistence farmers are skeptical of the claims of 'higher profit'," said Welsh academic Simon Jones, who has spent the past two years researching the scheme. "There are fears it could become just another extractive industry that gets exported abroad and then imported back into Jamaica at a higher price."

Under the new legislation, small farmers growing up to an acre of marijuana would need to pay a $300 application fee, $2,000 annual license fee and $1,000 security bond. They are also required to carry out major infrastructural changes to their farms such as installing security fences, which cost nearly $10,000 to cover just one acre, added Jones.

Rastafarians, herbalists and farmers' associations have all expressed dismay over the ganja scheme, which was pushed through by former justice minister Mark Golding, and which critics claim is intended to benefit big business.

"The perception is that this is for the big man, and it is causing a big problem in Jamaica," said Basil Hylton, president of the Kingston and St Andrew Ganja Growers and Producers Association. "They look at the American model and intend to use that in Jamaica, and that is why the farmers — who are the real ganja farmers — are not part of the process. You can't just go into the bush and plant anything and say it's for medicinal marijuana use: it has to be up to standard, and cost is one of the big issues."

Not one of the 2,000-plus farmers in Hylton's association has signed up to the deal. "To come on to the radar, they have to have land titles, access to land, access to capital, and the cost is prohibitive," added Hylton. "I believe now the government are realizing this is the problem, because no one has applied."

Small farmers would be more likely to engage with the scheme if licensing fees were reduced and red tape diminished, said Indian, 45, a subsistence farmer whose great-grandfather first brought marijuana seeds from India to Jamaica in the 1850s for medicinal purposes.

"We started up a group and were going to get registered and try to apply for the license, because to be honest no one wants to do what is against the law," explained Indian, who grows illegal ganja among his many other subsistence crops.

"But I did a costing, and for a small farmer like me to set up, apply for the license and other fees, then the 24-hour security, it would cost well over a million Jamaican dollars, which is a lot here. The government's not marketing it for us. Where do we get these products? Who would we sell to? We're not able to sell it abroad, so we plant it and harvest it, and then it stays here?"

The lack of clarity over regulations — coupled with the fact that international cannabis growers have already become involved in research and development — has led many to fear a return to colonial farming days, added Indian.

"These so-called big people who want to get involved, they don't even know how to plant or grow marijuana, and maybe they have a big pharmaceutical company in America or Canada, and they want to set up here. Then they employ us as small farmers on the minimum wage. People are getting smarter and they don't want to do that. They want to be happy and independent of this kind of living."

Kathie Lennon, a long-time Jamaican advocate and self-proclaimed "medical marijuana cultivation expert", is one of the few applicants for the ganja scheme. She says both Jamaica's government and its farmers need to be smarter about entering the industry.

"What will make it work is if we open our minds to what Jamaica really wants. This country is embedded with ganja, and the cannabis industry is a big market. What will Jamaica do? What is achievable now? Bob Marley and Peter Tosh are our biggest ambassadors of cannabis. We can make money off this image, but we have to do the work." 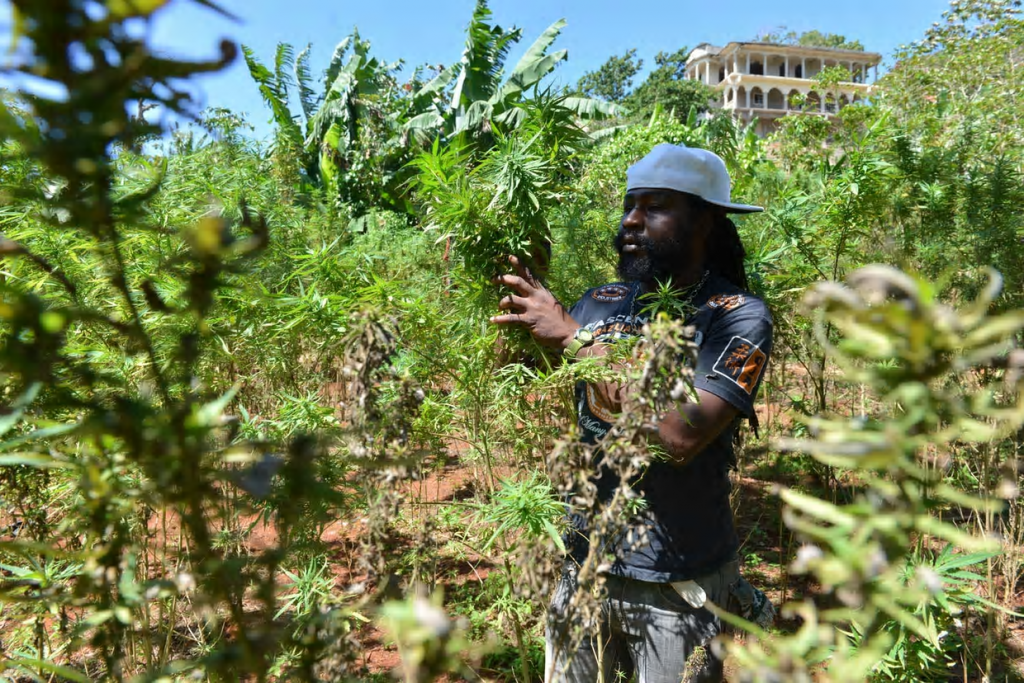