Hey guys this is more so out of curiosity not an "oh shit mother of pearl my plant is dying" thread aha. I was following a journal and he stated that he boils his water. I was curious to see if it lowers ppm's. On the contrary it raises ppm's. Here's the data.

I thought maybe it was the pot I used to boil so here's what I did.

I just want to know why. Knowledge is power and this one has me stumped at the moment... Thanks!
My First Grow Stay classy my friends!

good read got me thinking, I for sure though after boiling the water the PPM would drop as your sterilizing the water

why didn't you run Tap water boiled without the pure filter and cooled to room temperature?
Grow Journal
https://www.420magazine.com/forums/journals-in-progress/305115-deanbs-winter-grow-progress.html

You are boiling away water and leaving contaminants which raises the concentration; aka raises the ppm.... I'm fairly sure the only thing boiling the water does is kill bacteria, or maybe boil off chlorine or fluorine....

DeanB said:
why didn't you run Tap water boiled without the pure filter and cooled to room temperature?
Click to expand...

Because I don't see how that is any different, I would expect the same results. Buttttt, I will do so tonight! Numbers don't lie so I shall see for myself.


jonathanfrost said:
PPM is a function of mass of the nutrient / mass of water. When you boil water, the water mass is reduced due to evaporation while the nutrient salt mass remains the same. Thus, as you decrease the water mass the ppm raises.
Click to expand...

So boiling water doesn't eliminate the nutrient salt mass? I see what you are saying. Makes sense too!


Specialists said:
You are boiling away water and leaving contaminants which raises the concentration; aka raises the ppm.... I'm fairly sure the only thing boiling the water does is kill bacteria, or maybe boil off chlorine or fluorine....
Click to expand...

I always thought it boiled away contaminants, but yes this makes sense I am raising the concentration.

I will then measure the percentage of ppm increase and my hypothises is that the longer the boil, the greater the ppm percentage increase. This will solidify your answers. Stay tuned! Hell I might even take pictures and treat it like a grow hehe :28:
My First Grow Stay classy my friends!

Save your water. Your results will be what you hypothesize. When you boil the water, H2O is converted from liquid state to gaseous state. It escapes the pot as steam and your PPM concentration raises. The longer you boil, the more water boils off, the higher the concentration will be. It's a basic concept best illustrated in cooking. Ever herd of a reduction? Chefs will boil off the bulk of the water in sauces to increase the flavor concentration.
S

Just out of curiosity, why are you boiling your water at all?

Spitz said:
Just out of curiosity, why are you boiling your water at all?
Click to expand...

My guess is to drive off potentially harmful volatiles like chlorine.

Heating and cooling water will drop out dissolved solids.... Failed hot water heaters are a good example when you open them up and see whats left inside..... Drawing down half the hot water, then the incoming cold water causes some solids to drop out... I live where it gets very hot in the summer, and the temperature swing form night to day is about 35*f..... I noticed this after filling a 35 gal black garbage can with water, the lid on, then neglecting it for two weeks... When i got around to checking it, the bottom was totally white... After draining the water and drying the can, there was a considerable amount of white powder... My water is about 1100 ppm...

Picture of what i consider very hot... Mid July..that's insulation in the bucket 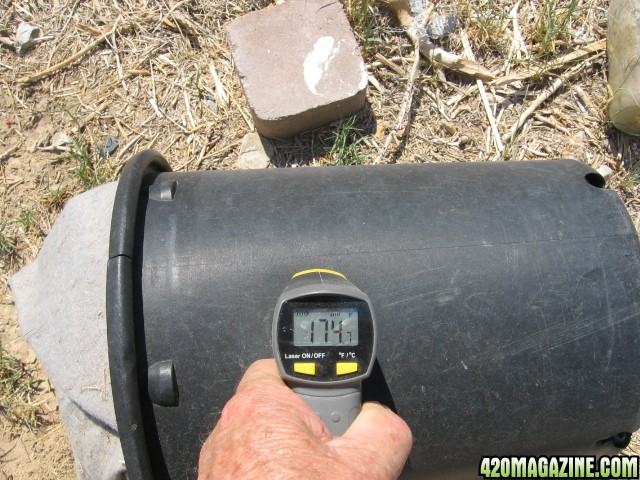 Here ya go guys, I went the extra mile. As stated, I am not boiling for my plants. I saw it mentioned in a grow journal and was curious to how it affects ppms. Everyone's explanations were spot on but I enjoy seeing things for myself. Now I have scientific evidence. Enjoy! 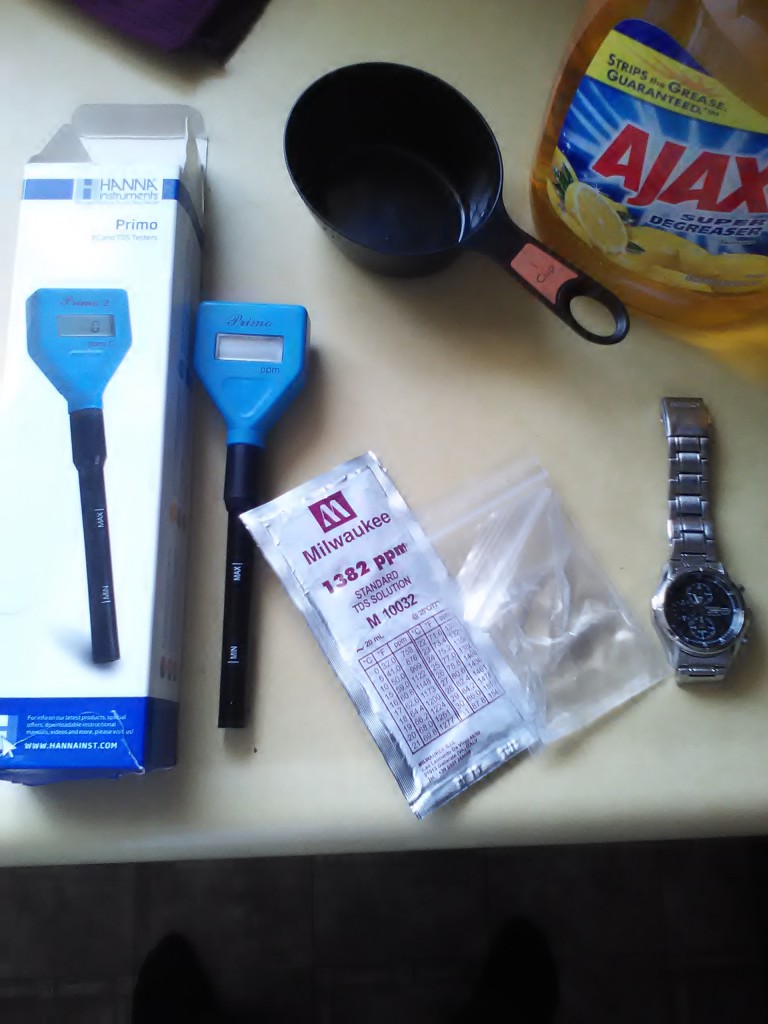 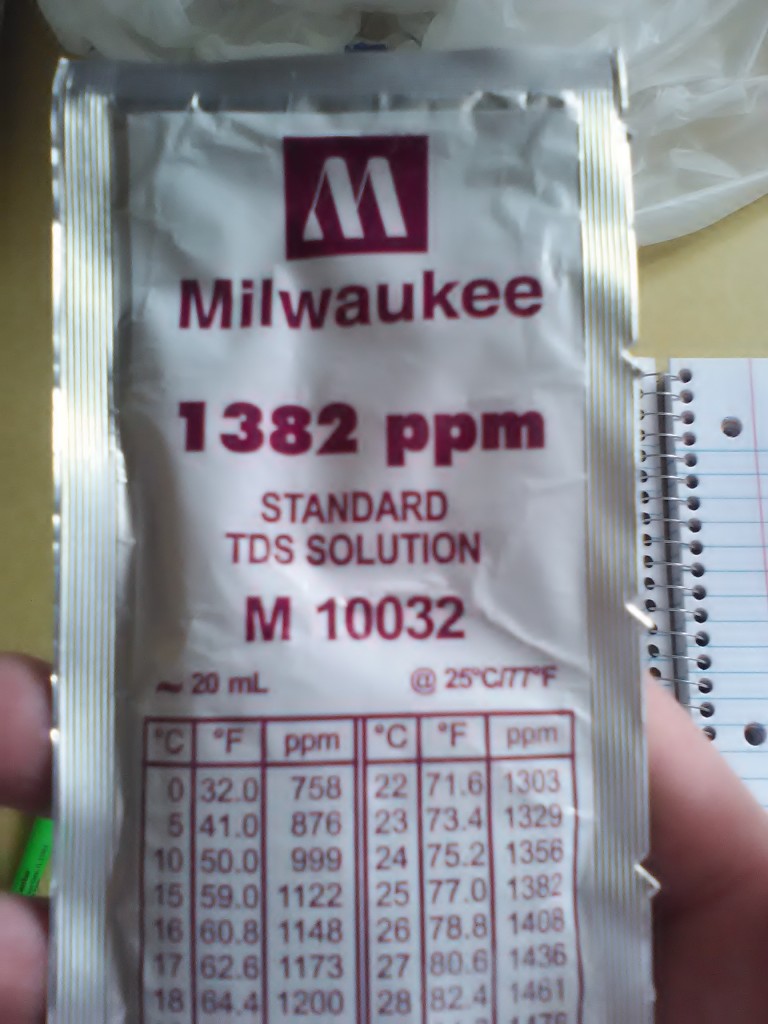 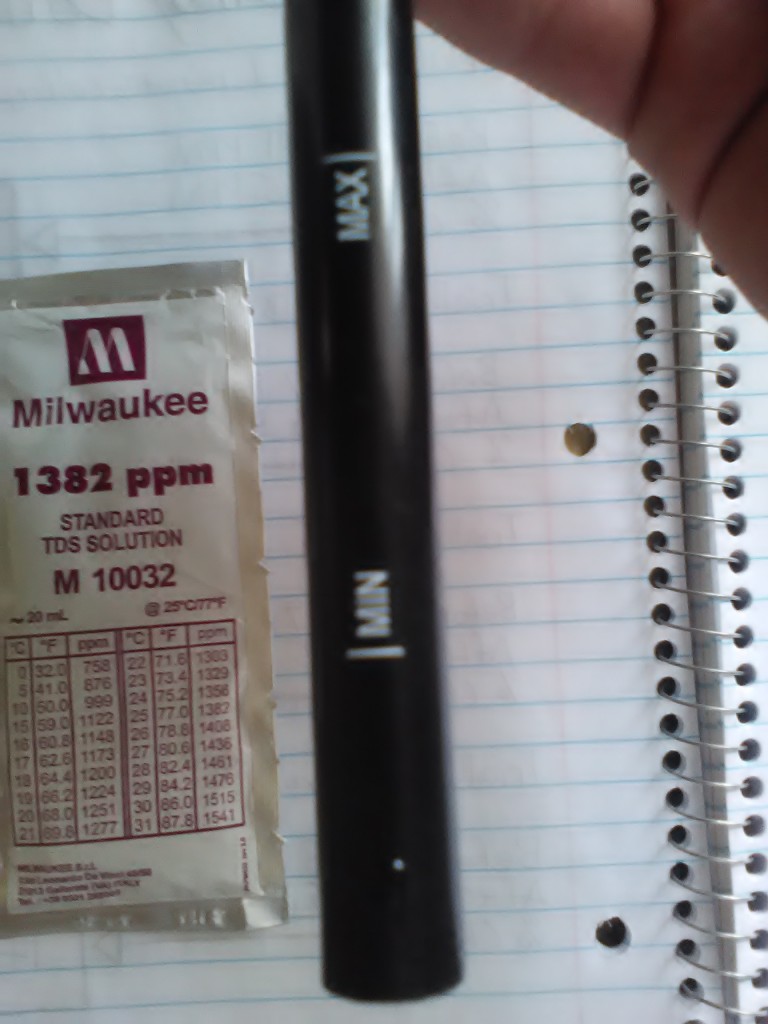 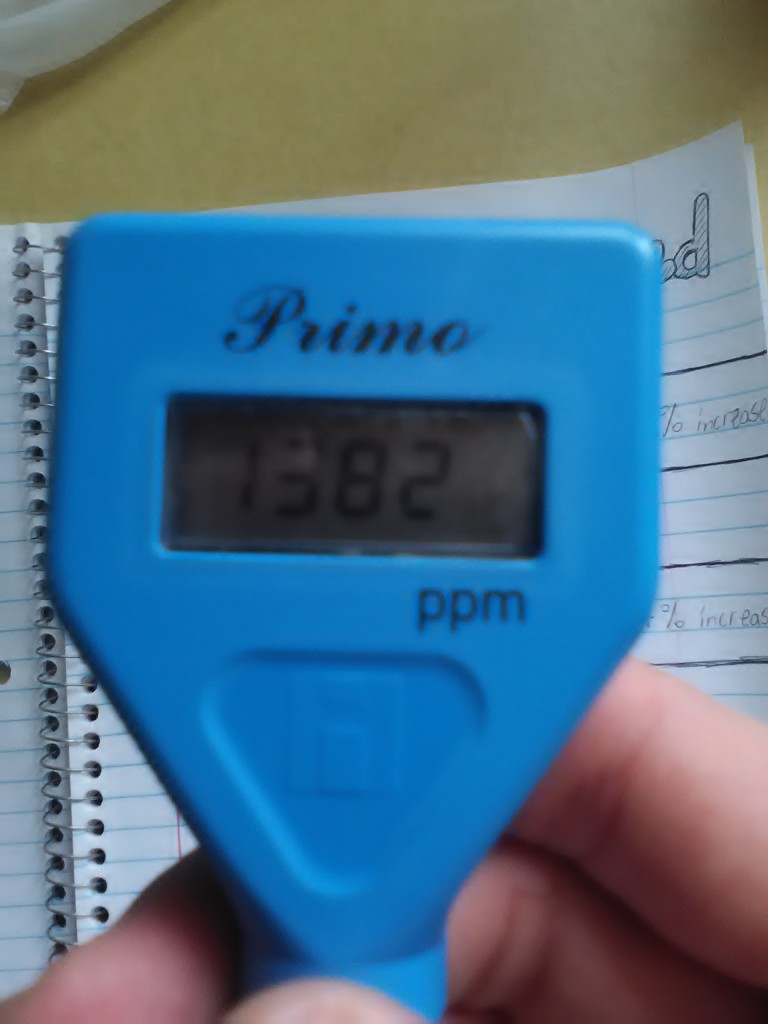 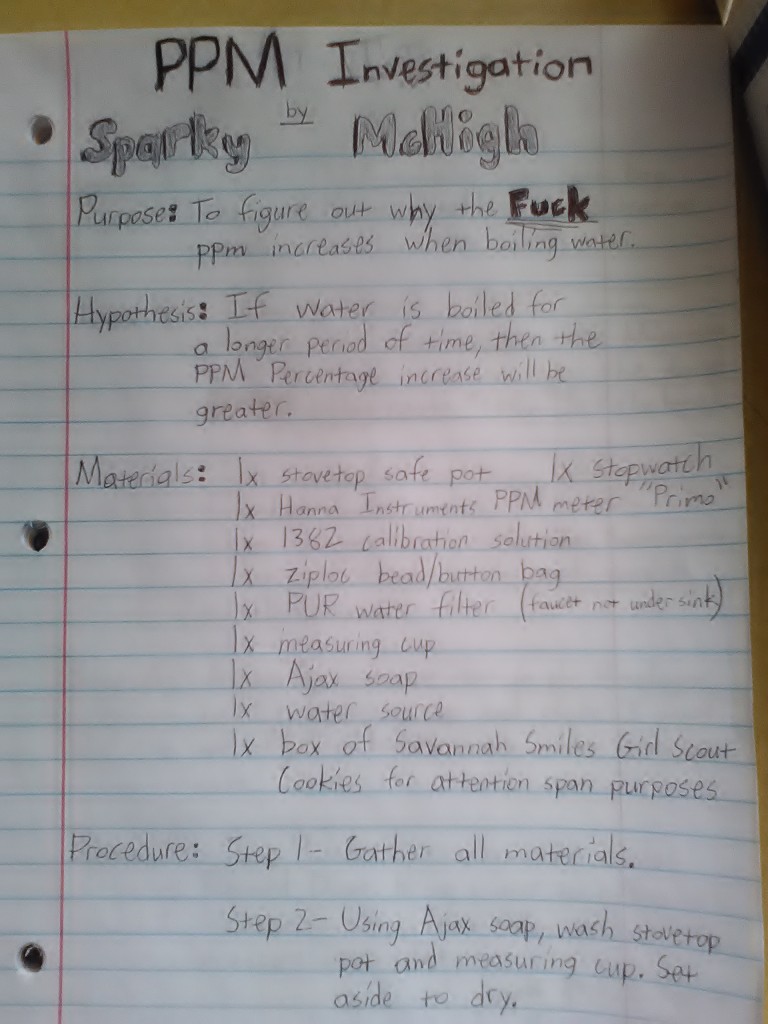 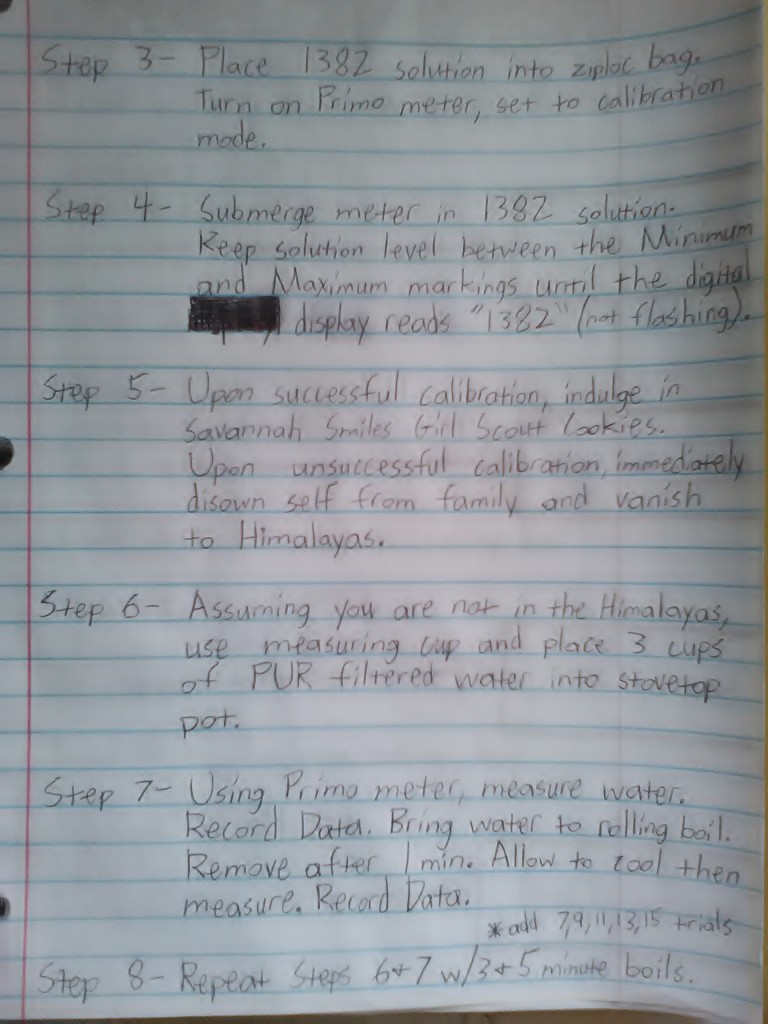 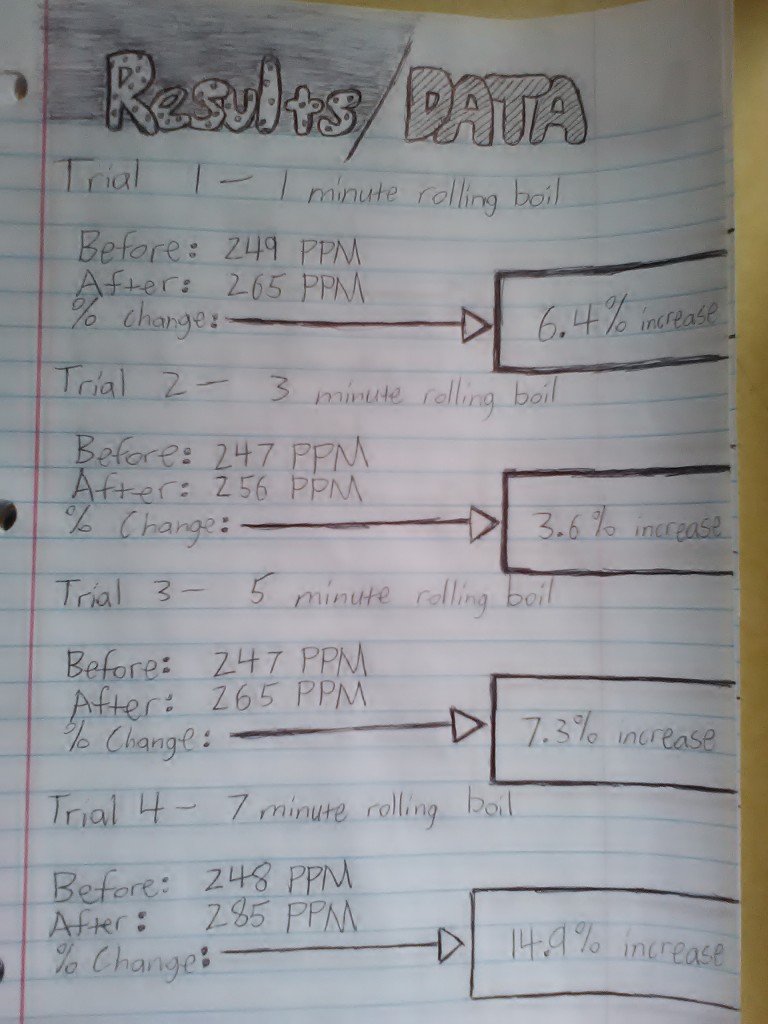 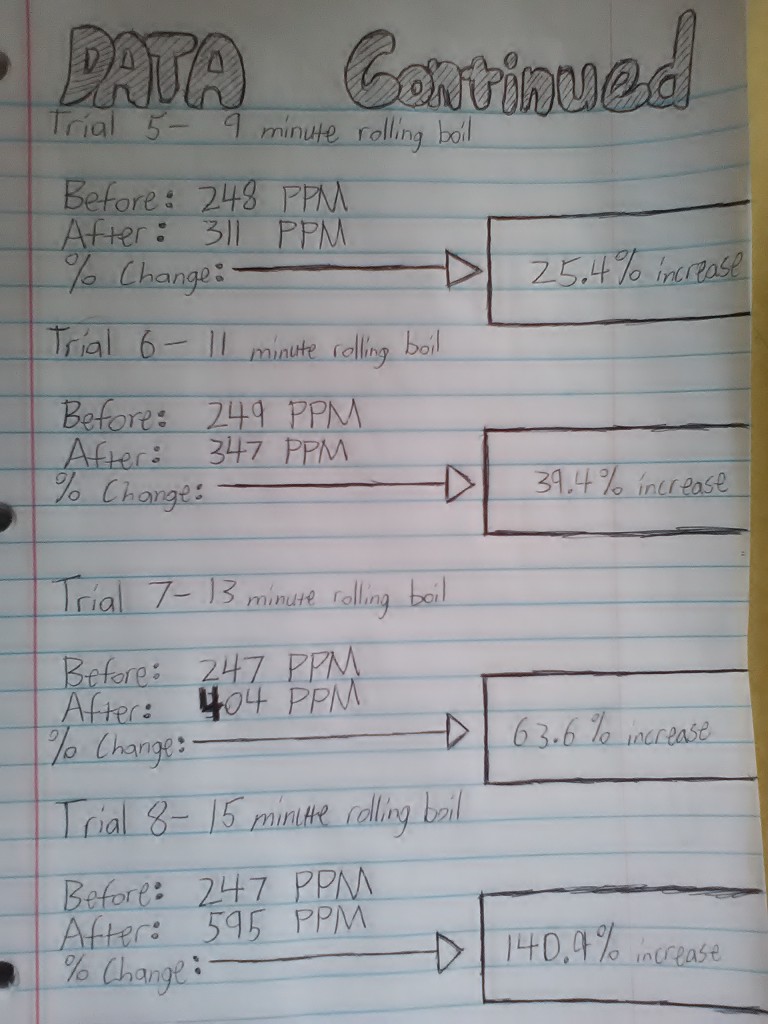 Conclusion: As most have stated, boiling water reduces the water mass while the contaminants remain (I thought they'd boil out too) thus increasing the concentration aka PPM's. I believe trial 2 with a 3 minute boil was a fluke but other than that the numbers solidify the hypothesis.
My First Grow Stay classy my friends!

Great experiment, once I thought about a sec it all made sense. Even though, I'm glad you conducted the tests... Lol What the hell else are we ocd/adhd's going to do with new toys, time and a bag of sticky weed.
Live >Stinky Snid's Nursery and Flower Shop : My Perpetual Adventure​
Completed >My First Journal - Cropking Northern Lights Auto ​
[hr][/hr]
:helpsmilie:Helpful Links:helpsmilie:​
>How to upload/post your photos
>How to start a journal
>How to add links to a signature[HR][/hr]

Those are interesting results. What was the volume of solution you started with? Solute concentration isn't necessarily a function of volume, but, it's pretty close in liquids as specific gravity doesn't change much with temperature. In trial 8, you would have had to boil off more than half your volume of water. There isn't a whole lot of volume boiled off in 15 minutes. You must have started with a small quantity. If not, you're picking up something from your boiling pot.

Interesting point Dr Fish. I know of no solvents that precipitate out solute at higher temperature. I may have to freshen up on some chemistry.

To double the ppm you do not have to half the volume of water...
S

Specialists said:
To double the ppm you do not have to half the volume of water...
Click to expand...

To double ppm, you either double the solute or half the solvent. Those are the only two options I know of. Please educate me as to any other possibility.
S

Does it work on a constantly linear scale?

You might also be seeing residue from the container that only dissolves at high temps. Just a random thought.
Tead's Current Hempy SOG

Inside Tead's world - off topic

All good points. I used 3 cups of water in every trial. Not to be an ass but it's stated in the procedures. I only point this out because others ask "why are you boiling" when I initially stated I am not. This idea come from stoner curiosity upon following another grow journal.


Tead said:
You might also be seeing residue from the container that only dissolves at high temps. Just a random thought.
Click to expand...


Specialists said:
Does it work on a constantly linear scale?
Click to expand...

No I do not believe this could be applied as a constant linear scale. I would predict that the rate is directly proportionate to the size of the pot and volume of water boiled.


Spitz said:
To double ppm, you either double the solute or half the solvent. Those are the only two options I know of. Please educate me as to any other possibility.
Click to expand...

Spitz I'd like to hear that explained as well.


P.S. sorry if I'm grouchy I'm a tad hungover and been cannabis free for hiring purposes... :24:
My First Grow Stay classy my friends!

Sorry Sparky for the question. I read your posts 3 times before asking starting volume and couldn't find it. I just went back and read 3 more times and still can't find it. Must be imbedded in such a way my mind just can't see it. Anyway.. Thanks for posting. There are many ways to measure concentration. As far as ppms.. Here is a definition from the inter web:


It is a mass calculation, not volume. That being said, volume is near linear proportional to mass in liquid solvents with temperature. This is not the case with gasses. Thats why I was asking what the volume of water was you started with (measuring mass accurately would be far more difficult than measuring volume). It would have been nice to measure the volume afterwards as well. Still, you can take some good qualitative information from your experiment. Keep in mind also, when we measure ppm a pen, we are measuring electrical conductivity and converting to ppm from a table. It does matter a bit what solutes you have dissolved. A Ppm pen gets pretty close though.