An official breeder-sponsored grow and review. I contacted the folks at Bomb Seeds (a long time 420 Sponsor) and they were very enthusiastic about the idea. I told them my needs:

Kind of sounds like a kinky personals ad doesn't it?

Anyways, a week later I opened up a nicely stealthed mail package from Bomb's UK office and inside was a selection of strains and a really cool Bomb Seeds T-shirt. 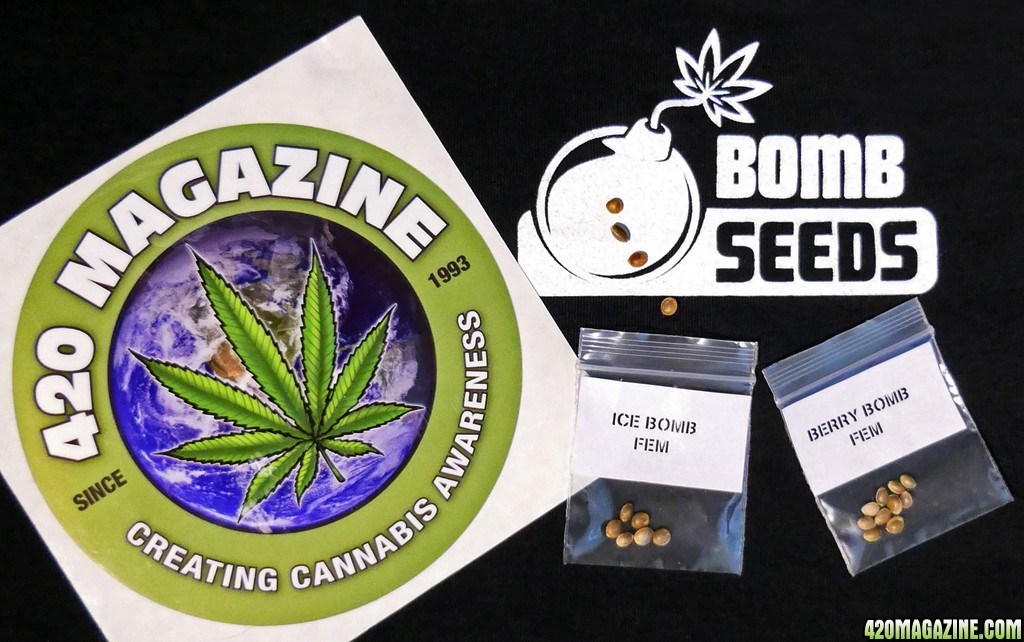 So this means that I will really have to apply myself to my new job.

Yes, for some unfathomable reason, Mr. 420 accepted me as an Official Product Reviewer. So as long as you promise to help me, I should be able to survive my first grow and keep my job. And maybe, just maybe have a couple of big bags of superb medicine at the end that will allow me to break away from the expensive Medical Marijuana machine. And . . . not to forget . . . help our great sponsor Bomb Seeds, by showing you how easy it is to grow two of their amazing strains. So please, in the spirit of the 420 community, join in. I will need all of the help that I can get.

Here is a peek at the current progress: 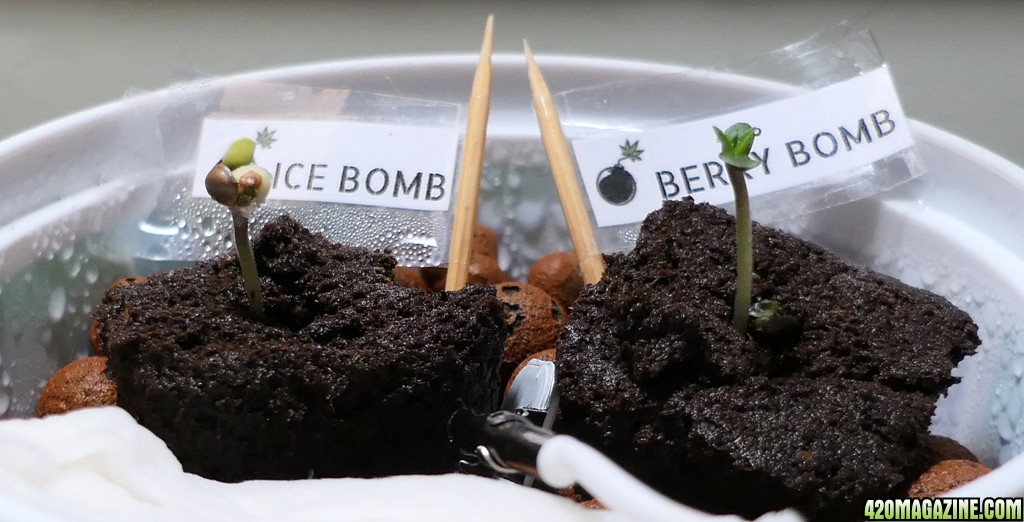 Pennywise, Grandpa Tokin, Kingjoe83: Thank you all for joining in. I am glad to have you all here. I can certainly use your sage advice.

Both strains have similar grow patterns & both flower in 6 – 9 weeks so they should get along in my tent with a SCROG grow. I am only planting one seed of each strain. That way I can monitor & report the differences as they grow in exactly the same environment.

For germination, I followed the advice that I have read here hundreds of times.

I transferred them to my DIY germination space. Heating pad with towels for a temp buffer. Rapid rooters sitting in some hydroton in a container with a clearish plastic cover. 60W incandescent light. Temp 80+/-. I guess I didn't mention that I blew my supplies budget months ago so a germ/cloning station is in the future. 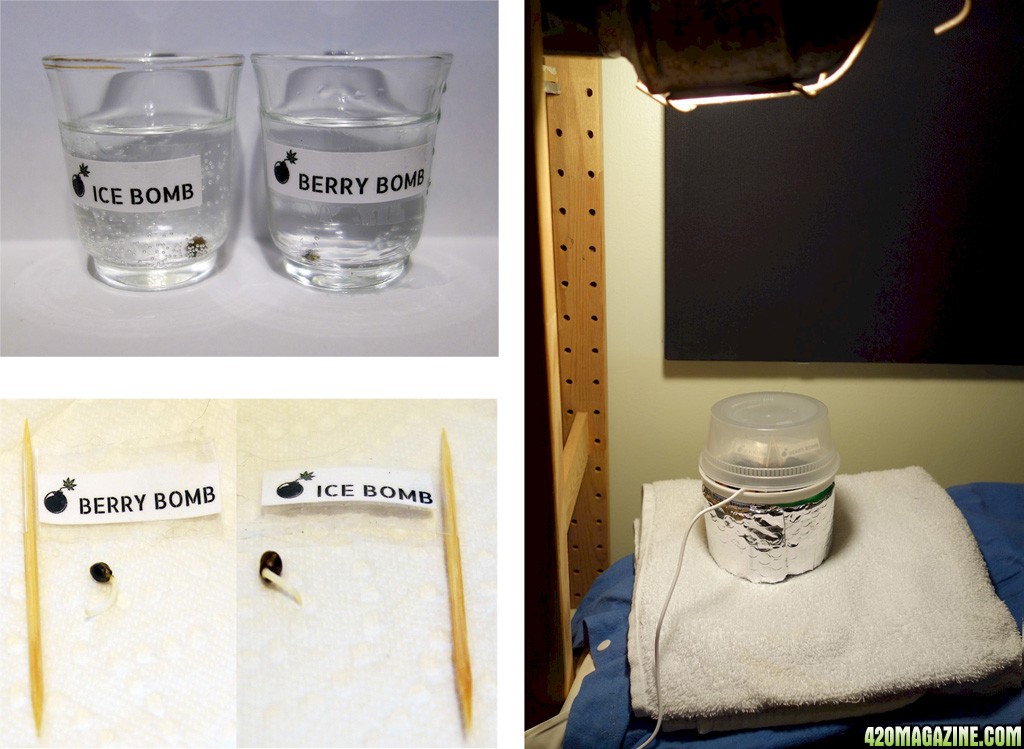 The Ice Bomb was the first into the game after 12 hours. Both were poking out of media at 24 hrs. See pic in the thread above. These are powerful eager seeds!

One upon a time, there was a Nederlander named Lars who made some new friends while traveling in Australia. A shared passion for growing cannabis convinced them that by combining resources, they could do something really special. So in the early 2000’s, they set to work in the Netherlands.

For many 420 Magazine readers, breeding is no mystery. Gregor Mendel wrote the original breeding textbook in 1865 with his pea experiments. You start with two genetically different landrace parents (called P1s) that exhibit the traits that you want and the resulting offspring are your hybrid F1 generation (the F stands for filial). From these you choose that special plant that has everything you want & reproduce it or you go further and cross two of them to create an F2 (although an F2 is also sometimes used to identify a result of an F1 crossed back with one of its P1 parents or a herm that has been self-pollinated).

Confused yet? Well, it doesn’t matter because rest assured, Lars and the Aussies knew what they were doing. Their goal was explosive growth and great taste with high THC content. In 2009, they achieved this goal with their strains and Bomb Seeds was born. Their first internationally recognized super cultivar was THC Bomb. This was a product of an undisclosed cross with their Bomb #1. Rumor has it that Bomb #1 is an F1 of Afghani origin and Bomb #2 is a landrace sativa. All of Bomb Seed’s successive strains start with these & they are grown organically in the Netherlands. 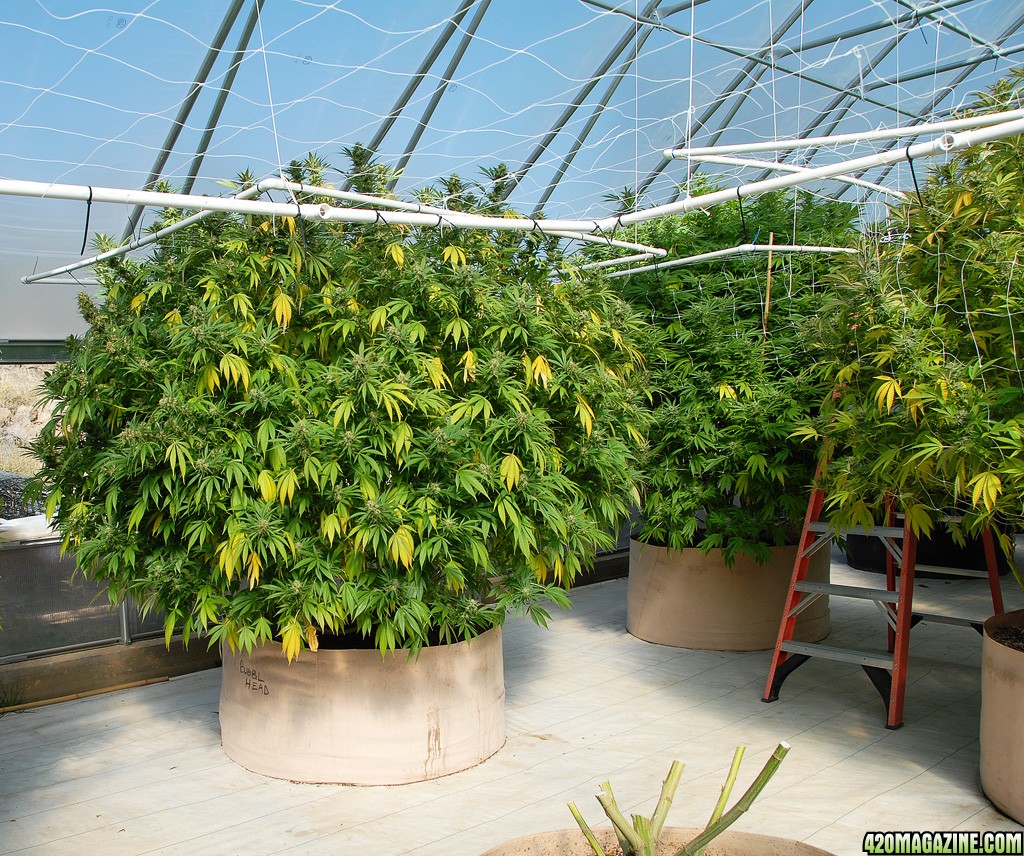 Wedding Pi, and some other Kinds. Winter 2020 (Complete)

Thanks For Being Green!


MotaFina said:
I've been curious about Bomb! seeds. Let's see how they do.
Click to expand...


Agreed. There are only a few grow reports around here and on the net so I thought we should add to that. Bomb Seeds are not a public flashy breeder like some. They don’t jump on the bandwagon with hot new strains, they just quietly produce strains that they really believe in. They also sent me some THC Bomb seeds which will be a future grow.

When should I move them to my Big Boy Light in the grow tent?

Here is the status this morning. Ice has finally shed her shell cap overnight. She was leading in development until that cap slowed her down and let Berry overtake her. Both are doing well but stretching toward the weak 60W light which is too warm to get too close. 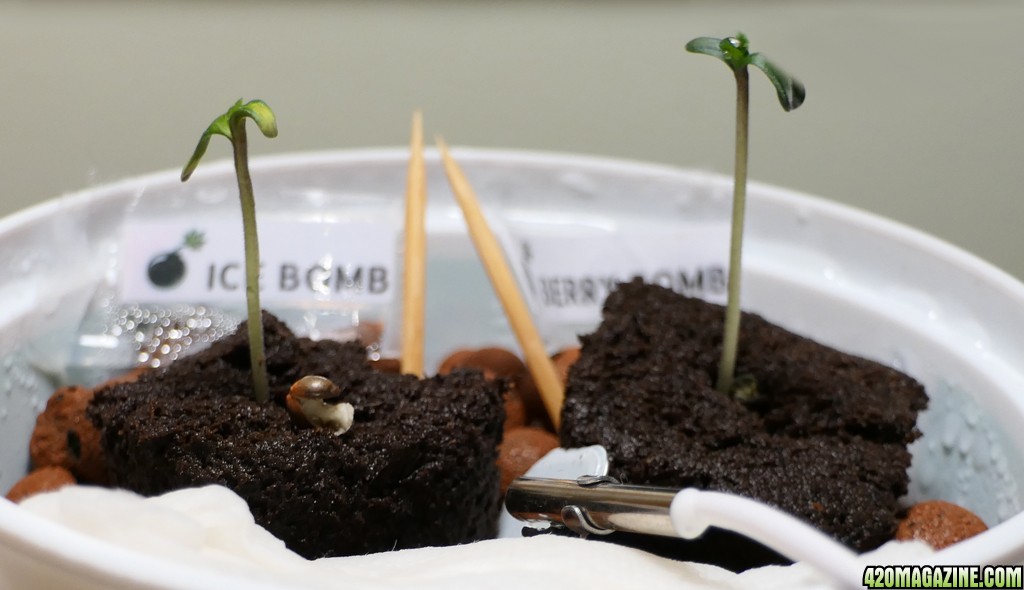 I'd recommend swapping out the incandescent with a 26W (100 watt equivalent) daytime CFL. You can get the CFL much closer to the plants and it has the correct light spectrum for the seedling stage. Those seedlings are already looking a little stretchy.
Current grow journal: 420 Magazine Girl Scout Cookies Comparative Grow - Motafina
Previous grow journals: 2nd - 3rd - 4th - 5th - 6th - 7th - 8th - 9th

I just swapped it to a (wattage too small to read) expensive LED daylight bulb that was deemed too hideous to use anywhere else in the house. It is riding 2" away. That will hold it until I can get to Home Despot.


pennywise said:
Mine go under the big boy lights from the start just keep higher than normal
Click to expand...


I have to fiddle with the setup and fill the totes before I turn the switch on. Maybe later today but by tomorrow AM at the latest.


pennywise said:
Mine go under the big boy lights from the start just keep higher than normal
Click to expand...


This. I use 8-bulb T5s for veg and when they’re small like that I only turn on 2-4 of the bulbs depending and raise it if needed.

I’m very interested in these strains and what you get. The lineage sounds Bomb—pun intended.

Mine start under the main lamps as well at around 36"
Dual 4x4s, coco, and quantum boards

I measured mine today and its 32" above the plants, Mars Pro II Epistar 160. ppfd is around 350 umols in the center dropping off to 275 umols at the edges. The babies are loving it.
Mushrooms and Cacti
HELPFULL LINKS
PLANT ABUSE CHART
How to reverse sex with Silver Thiosulfate
Bandaid Haze and other goodies
Pennywise Strikes Again (Current)
Bonzai Moms
ATREUM LIGHTING

I'm in! I hear nothing but good things about bomb, I'm looking forward to seeing what they can do!
Bignstrange - Yep thats me!