U.S. Sen. Cory Booker isn't fighting against the war on drugs by himself.

His legislation to end the federal ban on marijuana has the support of the Drug Policy Alliance, an advocacy group whose honorary board includes former Surgeon General Joycelyn Elders and former Secretary of State George Shultz. The late CBS News anchor Walter Cronkite also was an honorary board member.

The group plans to meet with members of Congress and urge them to support the legislation. said Queen Adesuyi, a policy associate.

"Marijuana legislation would get communities of color and low income communities in a better place," Adesuyi said. "Legalization is not a cure but it definitely moves us in a better direction than we are now."

Booker's efforts are being challenged by Smart Approaches to Marijuana, an anti-legalization group whose advisers include former Rep. Patrick Kennedy (D-R.I.), a Brigantine resident who sits on the presidential opioid commission chaired by Gov. Chris Christie; and by Colorado Christian University's Centennial Institute which has launched a online petition drive against legalization.

"Senator Booker is much smarter than this," said Kevin Sabet, president and chief executive of Smart Approaches to Marijuana. "We were very disappointed that he did not consult with us.

In introducing the legislation, Booker said blacks were almost four times more likely to be arrested than whites for marijuana use, even though both races use the drug at the same rate.

"The deeply-entrenched interests who want to keep the status quo are advocating for a system that continues to arrest blacks, Latinos and the poor for marijuana at highly disproportionate rates," Booker spokeswoman Kristin Lynch said.

"You don't need to support marijuana use to recognize that prohibition isn't working, and is making our justice system far less just," she said.

"It affects generations of people," she said. "It affects families. It puts people who are low income in hard positions because of fines and fees. And this is for a drug that eight states have determined is perfectly fine to sell for recreational use." 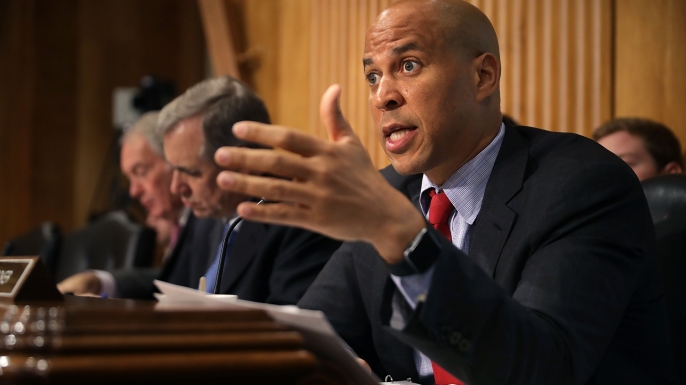 Unfortunately without some republican support in congress it won't go any where.
420 Magazine-Grow Support