Border Patrol officials say that around 1:30 a.m. agents assigned to the Yuma sector saw a Ford Bronco drive up to the primary border fence several miles east of the San Luis, Arizona Port of Entry.

The vehicle stopped near the fence where agents saw several people who had been waiting atop the fence load large bundles into the vehicle.

Officials say the driver then sped away from the border, trying to blend in with local traffic.

Agents spotted the Bronco and tried to stop the driver, who then turned around and headed back toward the border.

Agents used spikes to deflate the vehicle's tires, flattening three of them, and it eventually came to a stop just north of the border fence.

The driver and two occupants fled from the Bronco and climbed the fence into Mexico to avoid arrest, officials said.

Agents found 34 plastic-wrapped bundles of marijuana stuffed inside the vehicle, a total of 929 pounds estimated at a street value of $734,200.

The marijuana and Bronco were turned over to the Drug Enforcement Administration.

Border Patrol officials say that during the month of December, Yuma Sector Border Patrol agents kept more than 5,000 pounds of marijuana from being delivered to American streets. 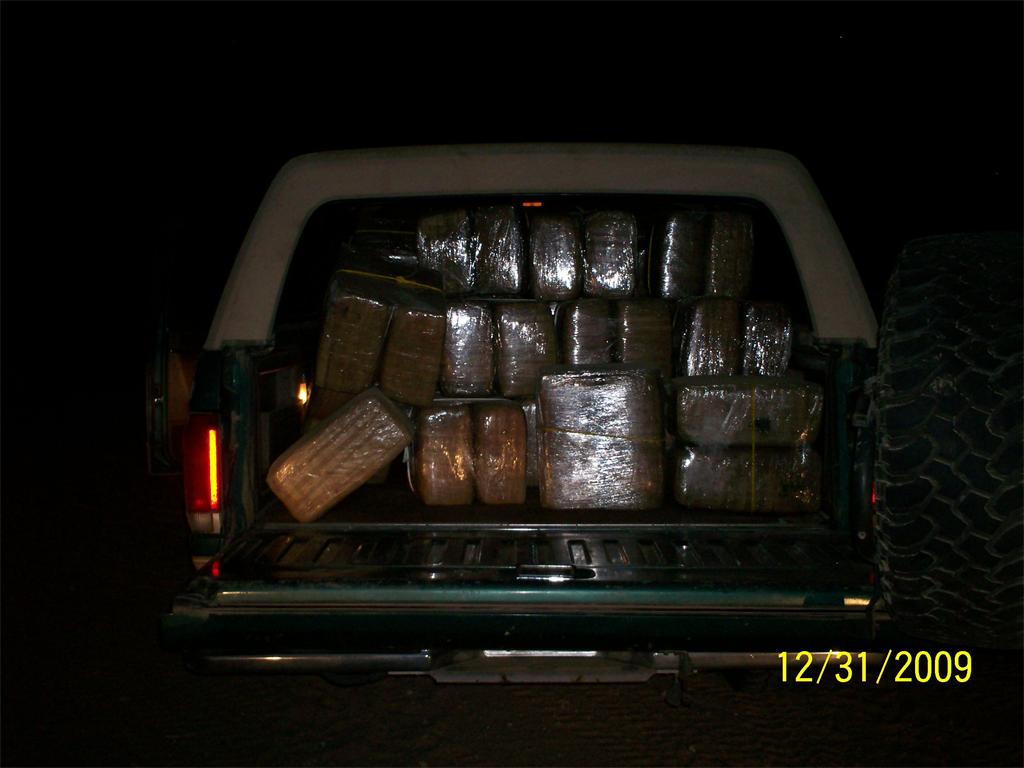 â€œCannabis will one day be seen as a wonder drug, as was penicillin in the 1940s. Like penicillin, herbal marijuana is remarkably nontoxic, has a wide range of therapeutic applications and would be quite inexpensive if it were legalâ€.
V

Thats some crappy stuff, or prices have dropped, or the DEA/BP have no idea of street prices..720 a pound?....
S

good bud is still around 3 grand.we don't get mexican weed up here in B.C. but if they're willing to take a chance smuggling it it has to be worth 790 a pound.that's chicken feed.
Last edited by a moderator: Jan 5, 2010
V

The articule says street value 734,000..No way..even at 5 bucks a gram street would put it closer to 2milliondollars..No one on the street corner is selling pounds..Hard to keep a one pound ballon full of pot in the mouth..not that I have ever seen dealers with ballons in their mouths before officer..I..um..um... saw it in a movie..ya
S

i'm sure they had a drop where they intended to sell to some gang or other.prohibition has gotten so ugly that the normal citizen is taking his life in his hands to sell a point of anything.it's a death sentence in my town although the cops in my area,south slope vancouver insist that the gang that was killing everyone is in prison.they were not charged with one murder although the cops were very vocal about how many bodies were on their heads.east indian gangs were just couriers when i was in the game.nice job the prohibition mob have done with drugs in van.179 gangs and counting.what is mexican pot worth down there?how is it coming in,as bud or just the whole plant like back in the day when the flower tops were the best we ever saw up here?i have seen the plants down there,in photos,and they looked like they had a lot of really nice bud growing on them.we have so much local grown that you may even have bc bud in your medical marijuana shops.