Border Patrol and the Texas Department of Public Safety seized nearly 3,000 pounds of marijuana on Friday in Falcon Heights.

The major marijuana bust involved agents, state troopers and a helicopter from the U.S. Customs and Border Protection Office of Air and Marine, according to a news release from the federal agency.

They arrested two men and seized 129 bundles of marijuana, which weighed 2,918 pounds, according to the news release.

Agents requested assistance from a helicopter, which watched the truck drive to the nearby community of Falcon Heights, according to the news release. The nine subjects in Salineno returned to Mexico.

Border Patrol and the Department of Public Safety followed the truck to Falcon Heights, where the driver parked outside a home.

Border Patrol and the Department of Public Safety arrested two men – a Mexican man found at the home and a United States citizen who drove the truck – and seized the vehicle, according to the news release, which didn't identify the men.

U.S. Immigration and Customs Enforcement took custody of the driver and the drugs. 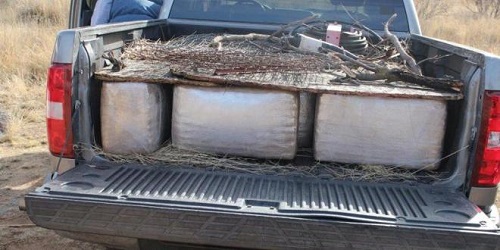