Increasing uncertainty over whether federal authorities will prosecute owners of medical marijuana shops has led a Boulder councilwoman to question whether the city has any liability for allowing the industry within its city limits.

Councilwoman KC Becker said she plans to ask the rest of the leaders to schedule an update from the city attorney about Boulder's level of culpability, should the federal government decide to start prosecuting local dispensaries and growing operations.

The request comes on the heels of a memo released last month by U.S. Deputy Attorney General James M. Cole, who wrote that people "who are in the business of cultivating, selling or distributing marijuana, and those who knowingly facilitate such activities" are in violation of federal law.

"State laws or local ordinances are not a defense to civil or criminal enforcement of federal law," Cole wrote.

That has Becker wondering whether the council's decision in May 2010 to allow medical marijuana dispensaries in Boulder has the potential to backfire.

"The whole impetus for us having medical marijuana dispensaries was the understanding that the feds would defer to state and local laws," Becker said. "If they're saying that's not true, the whole basis for authorizing -- for regulating this -- is pretty precarious."

Boulder's regulations -- which are among the most comprehensive in Colorado -- outline a permitting process for dispensaries and growing operations and set strict operating rules for the industry.

Becker said the decision to allow dispensaries in Boulder at all was predicated on the assumption that dispensaries would be free from federal prosecution -- at least during President Barack Obama's administration.

That assumption was based on a memo sent two years ago from then-Deputy Attorney General David Ogden, who wrote that federal law enforcement officials shouldn't waste resources going after people who are in "clear and unambiguous compliance" with state medical marijuana laws.

Many dispensaries opened up shop soon afterward, operating in Colorado under the assumed protections of Amendment 20 -- the voter-approved constitutional amendment that legalized marijuana for medical uses in 2000.

Becker said she wants to know whether there is now a risk that local dispensaries -- or city officials who supported the regulations that govern them -- could face federal prosecution.

"I felt like we're getting very clear information from federal authorities about their position on this and that we have to have some understanding of how to respond to that," Becker said. "The position we put city employees in is something I think we need to be conscious about. They're just doing their job, and I don't want to put them at risk of prosecution."

The Cole memo states that "those who engage in transactions involving the proceeds of such activity may also be in violation of federal money laundering statutes and other federal financial laws."

Boulder receives money from dispensaries and cultivation centers in the form of sales tax and business license fees.

Becker said that "all options need to be on the table," noting that she's not prepared to suggest that Boulder should consider banning medical marijuana shops.

"I kind of want to see where the chips fall at the state level, what the state response is and what my other council members think," she said.

Asked whether city attorneys were looking at the federal memo independently of Becker's request, city spokesman Patrick von Keyserling said the staff is developing an update for the council but a date for the presentation has not been set.

Carl Castillo, Boulder's policy advisor, said it's unclear whether the state will respond to the federal memo or leave local governments to fend for themselves.

"Will each city go on its own, or are we going to stick together as a state?" Castillo said.

Castillo suggested that that Colorado Municipal League, of which Boulder is a member, could help coordinate the response of various cities that currently allow marijuana dispensaries.

"I think it's 'buyer beware' for those that are interested in opening facilities under the licensing scheme," he said. "The federal government may come in at any time and close it all down."

He added that there is no talk that he's aware of about holding local officials accountable for medical marijuana operations.

"I think those in the medical marijuana community have more to lose on this," Bommer said.

"Ultimately, this isn't anything new," he said. "We continue to operate as business as usual."

Browne said he believes the memo is directed at massive marijuana cultivation operations in California, not licensed businesses in Colorado. He also said the memo reaffirmed that individual patients should not fear federal prosecution.

But he acknowledged that the government could change its mind at any time.

"It's a risk we take every day coming into work," he said.

"I don't know anybody who's involved in law enforcement in Boulder County who sees marijuana as a high-priority public safety issue," he said. "Why it is that certain folks in the Department of Justice make it sound like a priority is not clear to me."

Garnett -- who said he doesn't support a blanket legalization of marijuana, but believes legalization is "inevitable" -- said decisions about enforcing marijuana laws should be left to individual communities. 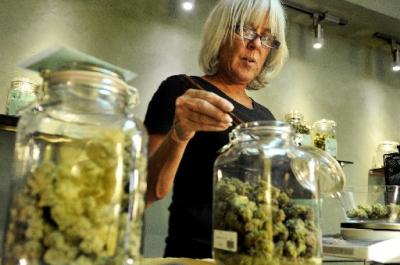