Dankman_420 said:
I have to ask, are you a new grower? Please don't take offense. Just wondering
Click to expand...

No offense taken. I have been groing for a while. Started here and there in late 90's. Then i stopt but kept in reeading on the subject for years. A few years back i've was helping friends and my knowlegde took me to horticulture school. Then i was growing again always a few olant here and there. And i've always had a plant on the go for the oast 10 years.
What you see is not an actual set up. Its only my room where i sleep haha. I have plant that i keep there because i like the look. When a olant gets to big i make a clone and flower the mother. I keep everything in a very small space.
Breeding Grow Journal: 144 Seeds Selection
F

Okay. Sorry for for the delay. So here a small update. I've kept 122 of the plant.

i left it in its original 3inch deep hole tray. Once the cotyledon had finish stretchin in took jiffy seed starter cup made if smashed up cardboard

It cut out the bottom placed it around the the bottom of the plant up side down and i top it with soiless mix. (biological pro-mix)

This will force the stem under the cotyledon line to sprout roots and creat an 3in wide by 7inch root plug...

The first picture is the inverted jiffy with soil topped. It was done over two week ago. The cotyledon are dead and the feeding will start you can see sign of nutrient deficiency starting. The solo cup on the pictur also shows me every time when its time to water (it dries) i water from under with about 1/3 of water that vets absorbe and rises all the way to the top and mosten the cup...

In the second pictur its the whole batch that has been move in a 10 x 5 grow tent with 3 400w Mh. It will be top anytime now. This is about a 29 days old from seedling.

Has for what will actually happen to them in about 2 weeks males will began to start showing sings if sex. And selection will slowly began it will take till about one month before most male shiw signs. The less vigourous and disurable will be discarded and the potential winners will be move back to my place where i'll doing test. And getting to know smell.. All females will be transplanted into 1 gallons. Some males remain but it will be sent to me. All male will be inspected... Female will then be label and two clones of each will be made and labled... One clone will be grown and flower indoor. And the mother will be flowered oudoor this summer. The best out of the batch will be tested for cbd and thc. And the clones with highest and the best smelling/ flavor terpened profils will be seeded and samole will be sent to lab for terpene profiling . Best indoor best oudour and the best of both world will be seeded to make f3's and the step will start for a fourth generation.

In 4th pic us train number 9 : the line that i'm working with. This a clone i took before the seeding. That i have pjt into flower.. I have a bigger mothe that i just cloned that i'll be flowering.. I keep a clone for gentic material and back crossing... I'll be posting more picture in a few weeks

I also forgot to mention that pheno are all showing no mutation. Can't wait to put it all int gallon pots at the same level (cotyledon line leveled) all phenos will then pop out show and will be seperated into groups. They have a lot of simillarities. But you can see a few really out shining those in similar group. Two seemed to match and have the same developpement that seemed a little faster then the rest. So i'll be looking a close watch on these two. If they win and they turn out a male and a female. It makes it easier and faster to stabilize
Breeding Grow Journal: 144 Seeds Selection
F

I'm also not doing the growing work, only the seed stage and selection of phenos.

I'm guiding a friend in do it for me has a reward for helping he gets to keep most of the harvest for himself as i only take few sample of the product i desire and get to have access to space well equippe for my project when i need. 240 indoor plants limit and 180 outdoor plant limit. Access to free thc/cbd testing Wich is to me really awesome and price if cost and anything i need.

So yeah knowledge can real land you some sweet deals in life.

The only thing i'm actually spending money on is bag of soil, and genetics when i need it.. Which i don't need at the moment.

Tho i have my eyes on certain genetic that i would like for colors smell taste and potency for the futur. But that will wait till i have pushed my line till i make a P1 male and female out if an F6 seed. Then i will use these ibl parent to make seed for distribution and to cross with all the genetic (ibl) i can get my hands on. And distribut true F1 cross of my own genetic.. My goal is nit to get richs and moke mad money out of this.. Just to provide canadien with strong and stable genetics that are fun to grow, enjoyable to smoke and great to experiment. Will probably make feminized to.. So we'll see in 4-5 years in the mean while i'll be sending less desired priduct as freebies all over.. And selling my pride at very low cost... Fuck the greedy market..
Breeding Grow Journal: 144 Seeds Selection

Good luck with the project man... hope you get something to help your partner out health wise. #420heals
The Land of Perpetual Chronic.. (2020) current
Bionic's first indoor grow journal (2020) complete..
F

Bionic Chronic NZ said:
Good luck with the project man... hope you get something to help your partner out health wise. #420heals
Click to expand...

Yes for sure i will get something. it's allready been mentionned i'm just not really greedy in general . My partners has many patientbthat he helps. Been offered few job as consultant and small grow class session and a hydro stor to work if ever i need. Since i have a goid job at the moment money isen't a concern. i'm manly doing this to provide my girlfriend with good medecine that have been created for her. So she gets everything i grow home and all samples i keep. I just keep seeds and the genetics.
Breeding Grow Journal: 144 Seeds Selection
F

Here are a picture of the plant doing real good they've been top for space ans been replanted in 6 inch pot... Will be looking to sift out males. Since covid19 dosen't allow me to travel to the location they have been growing at my friend's grow room.. They should hit the outside world in a month. A clone will be harvested fir indoor grow while they all gros outdoor during summer. Will have a more detailed program and picture once confinement is reduced

I haven't postes anything un a long Time since i was busty, but heure are aime pictures from the cousin if one if m'y friends from another province That lives nby the océan to test out growth (red cyn F2's) i have the mâle That was selected for pollen collection from my friends in Montreal. I had pictures from my friends That Grows in the South center of quebec completly diffrent environnement (over 100 plants) but lost the pictures Will ask for Them later. 3 clones from each of the 15 best growing plant was Taken for indoor flowering, i'll get m'y hands on one if each clone for seeding in a few Days. And un a few month IT Will ne harvest and potency testing.. si car si good. I'm getting ready to for cross pollinisation if diezel, red congolese, green crack and Skywalker Og with selected mâle pollen..

Heure are pictures from the Quebec province Grow Up and the pictures of a red cyn male growing on New Brunswick. Like you van Sée tueur is a lot of plants growing on Québec.. i've use aime mâle sac to cross with dôme diesel Cut i had flowering. Will ne grossit red congolese sensi star, Cheese, green crack and Skywalker Og. On a few Weeks and doinf the F3 run next or later month (with some of the clone sampler out ) and New Brunswick Will try and colkect mâle pollen for its purple hue

Did you ever collect pollen from this fellow? 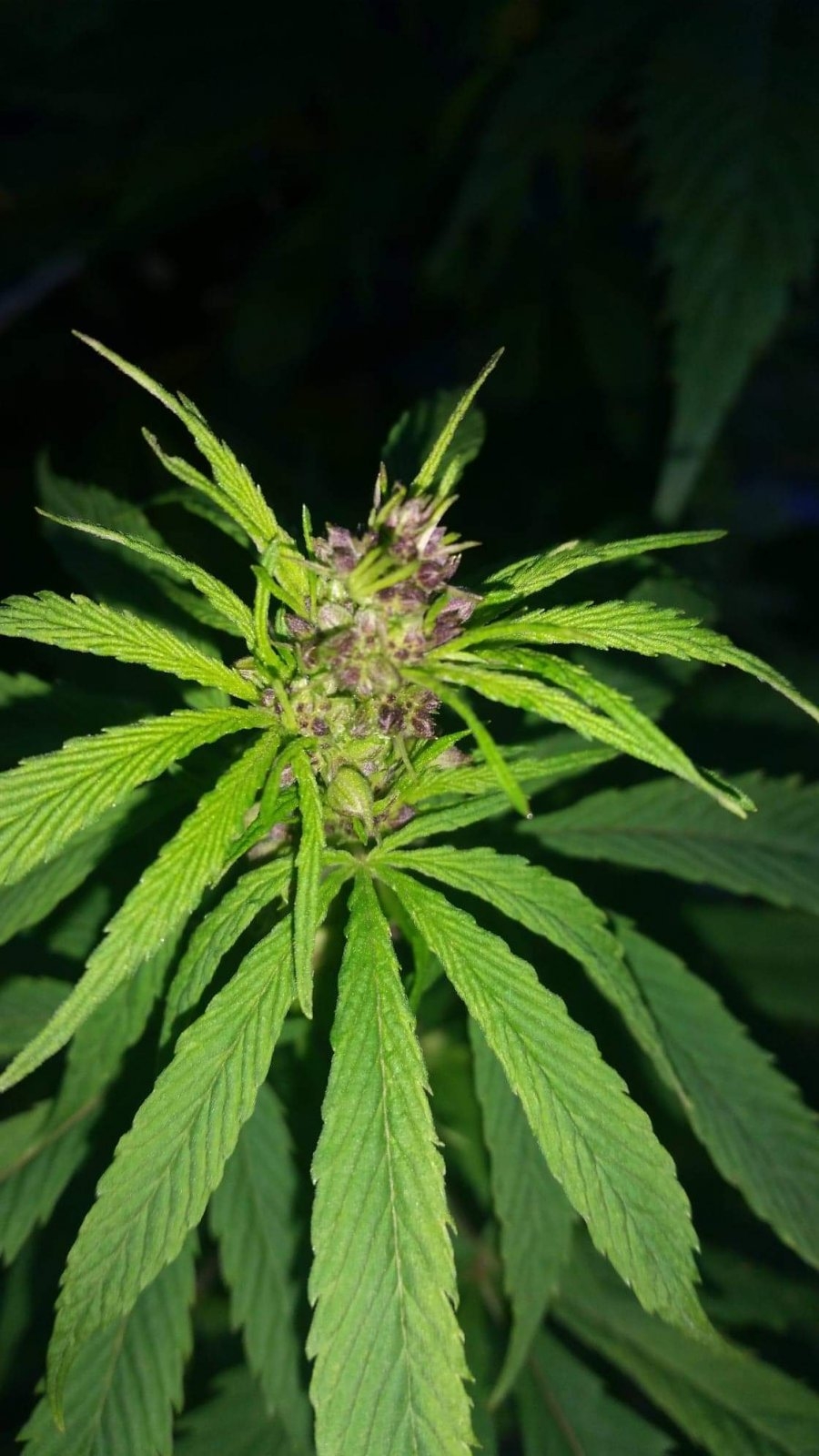 No i collected from another fella . But i should have. The males in this pictures was 12 hours drive away from where i'm located with confinement restriction preventing anyone from accessing that area. The male was sadly discarded before i could tell my budies to leave it ouy in the open.. i still have iver 300 seeds from this batch for a male hunt that i will eventually do when i have the time
Breeding Grow Journal: 144 Seeds Selection
D

So your doing a small batch rotation type program? Seems to be if your discarding plants and potentially germinating more material if large # are deemed undesirable. Cool.

I like to do a very short vege cycle, take cuts from lollipoping and run a heap. Store pollen etc. This way you can rapidly work through a large volume of material by permacropping. Every month or two your kicking off a new batch for selection. Just some thoughts.