Connecticut - After six months of chemotherapy, Betsy Glassman is relieved she will be able to obtain medical marijuana to treat her cancer. Diagnosed with stage four colon cancer in 2013, the Litchfield resident said a strain of marijuana believed to fight tumors may be effective in combating the disease. The Healing Corner will be the second medical marijuana dispensary in the state when it opens Tuesday at 159 East Main St. While medical marijuana will not be on site until mid-September, staff will begin evaluating patients like Glassman and recommending strains based on their needs.

Dispensary owner and pharmacist Geri Ann Bradley said that, although the facility has yet to open its doors, it has 220 patients and opening day is fully booked with appointments. No one without certification will be allowed to enter the building, which has state-of-the-art security cameras inside and outside. The doors are locked so patients need to be buzzed in. Inside, they will be greeted by a receptionist behind bullet-proof glass. The marijuana is stored in large safes in a room that can only be accessed with a key card.

David J. Slomski is the other on-site pharmacist. He said that unlike facilities in California or Colorado, where you are likely to see mason jars full of marijuana buds prominently displayed, "it's not going to be like that. "From the producers we are getting it packaged in child resistant containers with specific labeling," Slomski said. Many of the containers appear identical to conventional prescription drug bottles. The labels specify the active ingredients in the particular strain, so users will know exactly what they are consuming.

The Healing Corner will discourage patients from smoking the product because smoking adds carcinogens and decreases the efficiency of the medicine, as many of the active compounds get lost during the combustion process, Slomski said. They will be recommending patients use vaporizers or cook the marijuana into food. Commercial vaporizers will be available for purchase.

According to Bradley, the Bristol location expects to offer up to 60 varietals, each with carefully measured chemical concentrations for individual needs. This will be crucial for patients like Glassman who don't want to get "high." Glassman wants a strain with a high concentration of Cannabidiol, which unlike Tetrahydrocannabinol, commonly known as THC, does not have any psychoactive properties.

According to studies she has read, Cannabidiol has been shown to protect cells and prevent tumors in animal testing. Southington doctor Anthony Ciardella said he wishes more research could be done on medical marijuana. It is the first time he can recall a drug allowed on the market without FDA approval. Even so, he said he would prescribe it for his patients.

One of his chemotherapy patients whose insurance wouldn't cover Marinol, a THC derivative, had to turn to the black market. "I can't officially sanction that but it does work," Ciardella said. Southington doctor Christopher Manning has also had several patients turn to the black market to obtain the drug for chronic pain. Although chronic pain is not one of the approved conditions for medical marijuana, Manning said he hopes that will change. "We're talking about a very major effect on diseases that can be very difficult to treat," Manning said. Department of Consumer Protection Commissioner William Rubenstein said the statewide medical marijuana program "is designed to benefit very seriously ill patients whose physicians believe that marijuana can alleviate some of their symptoms."

In order to qualify, Rubenstein said patients must be Connecticut residents over the age of 18. Patients must have one of 11 "debilitating medical conditions" in order to register for a medical marijuana certificate: cancer, Parkinson's disease, Crohn's disease, HIV/AIDS, multiple sclerosis, epilepsy, cachexia, wasting syndrome, post-traumatic stress disorder, glaucoma, nervous tissue damage of the spinal cord or intractable spasticity.

Rubenstein said that medical marijuana business licenses were awarded on a selective basis through a competitive application program. The Bristol location's license was one of only six awarded. Applicants were judged on a variety of categories including, business plans, security, location and community giving. The facility plans to give one percent of its gross profit to charities such as the American Cancer Society and Disabled American Veterans. Bradley said the proposal for the Bristol location scored highest overall in the state.

"We can't wait to get started so we can actually make a difference," Bradley said. Two years ago, Southington's Planning and Zoning Commission unanimously voted to adopt medical marijuana zoning regulations, restricting dispensaries to business zones and prohibiting facilities from being within 750 feet of sensitive areas, such as schools, parks, libraries and churches. 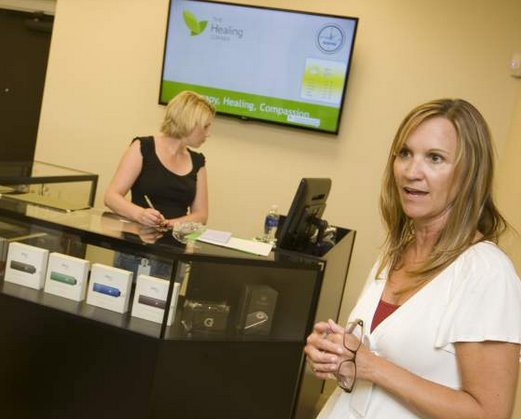