Brown roots day after nute/water change. What happened? What to do? 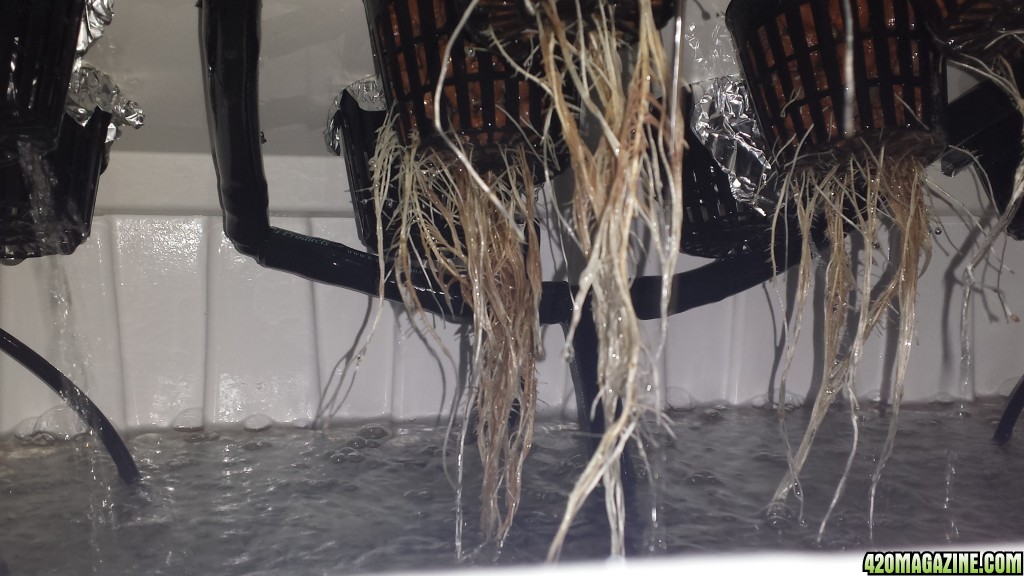 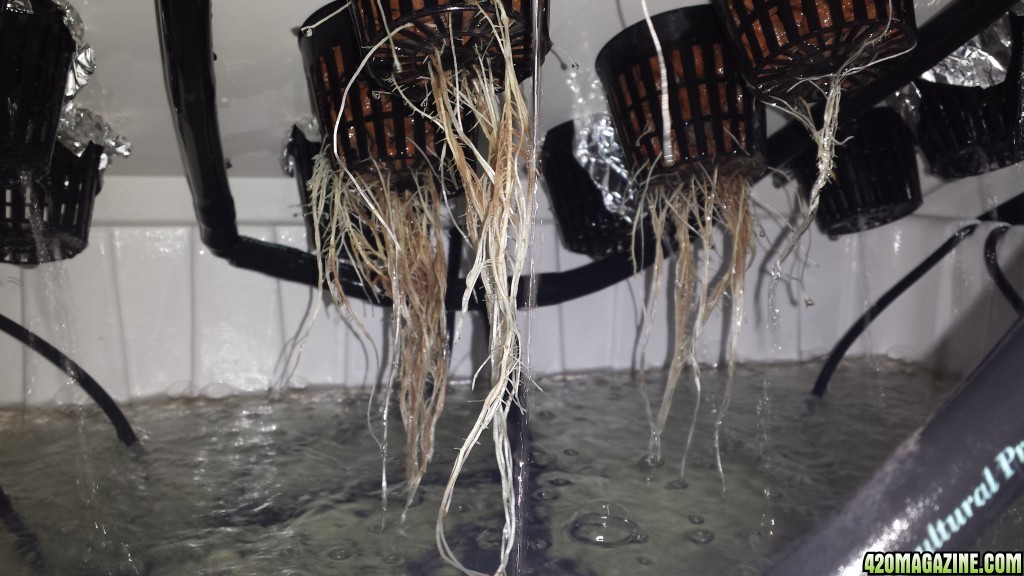 Roots were white on Friday. Changed water, cleaned rez/tubes added nutes per SuperCloset instructions. as follows, per gallon of 5.8 water :BC Boost3tsp, BC Grow 1.5tsp,Thrive Alive B-1 Red .5tsp, MagiCal .5tsp, SugarDaddy 2tsp. In retrospect I think nute mix is too high. Water has brown hue, smells ok and roots are not slimy (yet?). Rez is white, covered vacant net openings with foil as I read too much light in rez can lead to algae.

Any ideas on diagnosis and treatment? Is this nute overload leading to burn ?This is my first grow and any and all advice is welcome and appreciated.
i'm not who you think I am.
K

You have the beginning of root rot What are you rez temps ??? I would mix ph'd water and just peroxide 5 mm per gallon maybe a little stronger and give them a soak once a weeks you will start to see new bright white roots starting to grow after a few weeks maybe ad to your rez to hope this helps as root rot really sucks later down the road.
https://www.420magazine.com/forums/...etual-playground-post2185978.html#post2185978

thanks Kola. Just a few more things...
What temp should I be shooting for? How much should I add to the rez? When I refill the rez should I add nutes or wait?
i'm not who you think I am.
K

I'm not familiar with your nutes never used them if there organic it won't work to add to rez as peroxide will kill good and bad bacteria. If they are not organic then add 5 mm per gallon with your nutes. For the soaking you can add quite a bit when I get it bad I will use about 20 mm per gallon and let them soak for a good 10 15 min you might see some foaming it's ok just means the peroxide is attacking the rot. Do the soak for about 3 weeks or the whole grow it will do 3 things. 1. create a sterile rez for you 2. Will promote good new root development 3. Make you plants bushy. If you are using organic nutes then you need to do a compost tea, Rez temps should be around 68 degrees F. Hope this helps you
https://www.420magazine.com/forums/...etual-playground-post2185978.html#post2185978
K

Your white lid might be letting some light threw and this could be the cause too I had to get away from white or tape the top off with duck tape. roots don't like light if you can hold the lid up and still see your light thats too much light 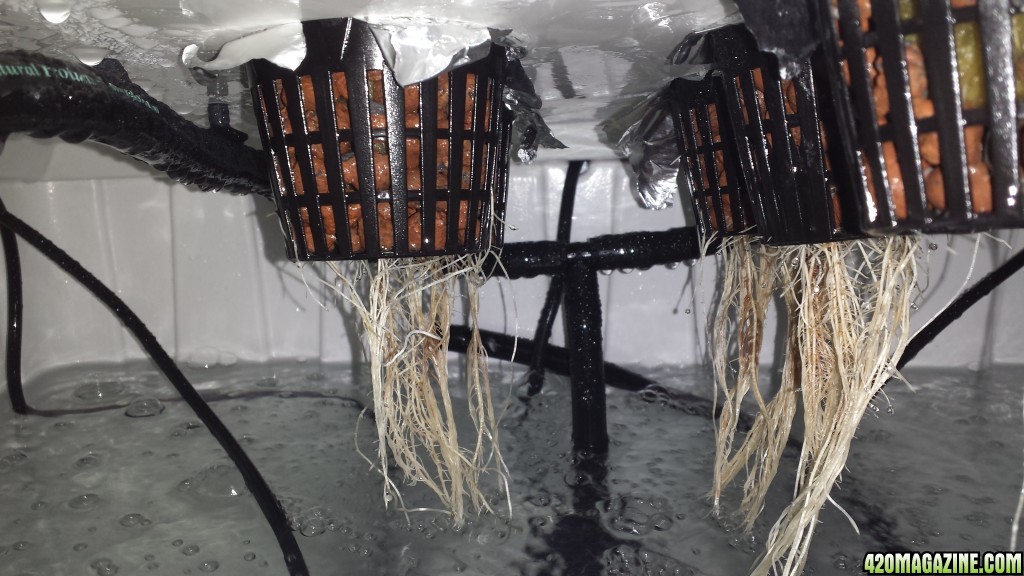 Wow Kola, as you can see, there is dramatic improvement in the roots after the soak you suggested! Thank You for the good advice.

We disassembled, scrubbed and bleached/2x rinsed every tiny little piece of equipment. Planning to repeat on Wed or Thurs. Visit to local hydro shop guy gained new info too. He said to go ahead with the soak & if problem persists or increases, he suggested Actinovate fungicide @ .5 tsp or less per gallon. Anyone know anything about Actinovate? pros/cons? Not planning to use unless this current improvement nosedives. We also covered tank top- cut out the light as suggested -and bought thermometer for rez.
i'm not who you think I am.
K

Looking good it amazing how that works isn't it LOL.. As far as the fungus goes it's the same as making compost tea if you make it yourself it's way cheaper than buying it. Look it up there a a few post and recipes floating around on here. But then no more peroxide it will kill good and bad bacteria. I don't clean my equipment with bleach a lot of people do but I just use peroxide does the same thing and if you miss getting some rinsed out it doesn't hurt your plants

Cut the extra tape away from your holes as touching it whatever is on your hands will stick to the tape and get in your water, I say this cause I use to adjust air stones in my tanks and couldn't figure out why my water was getting funky I was contaminating when I put my hands in that I thought were clean
https://www.420magazine.com/forums/...etual-playground-post2185978.html#post2185978
K

Just keep giving them a dunk once a week threw the grow you will be very happy with the new growth the roots keep giving you. I stopped this time when I was a few weeks into flower and started again the last few I won't be stopping this time just when you think you have it under control it will creep back up on you. Root rot REALLY SUCKS in flower as your just watching your plant die and the buds crumble away before your eyes.
https://www.420magazine.com/forums/...etual-playground-post2185978.html#post2185978

Ya, we were amazed at the improvement over night.
The hydro guy said he same as you, used peroxide instead of bleach to clean. Good thing too as we have a brand spanking new septic system and all that bleach is apt to destroy the good bacteria in there. Do you use regular ( drugstore type) peroxide for the clean or food grade? We got food grade for the soak and it was pricier than regular but that was at Natural Grocers ( not much open on Sunday when plants needed 911

). Found it much cheaper on Amazon though.

If all goes well then we will keep the soak up on a regular schedule as you suggest. Hydro guy suggested Actinovate if things get worse and I searched it here and there are some good remarks so I'm keeping that in mind.
About rez temps. Hydro guy said if things are too hot I can cool it with bottles of frozen water (keeping them sealed to cool water).

Cannot say this enuff Kola but

Hold on buddy I should have said this earlier I just use 3% from anywhere. If you buy anything stronger than 3 % you need to dilute it down to 3 % so you don't burn yourself or the plants. It's cheaper the way your buying it by the time you dilute it down I think it only comes in 17%, 23%, an 33 %. But at those % you can burn your skin too so be careful of that, I just buy the diluted cause there's really no way to mess that up

. And I use the same for cleaning my system too I just mix it 50/50 for the clean I don't really get much build up with the nutes I use so I just spray and wipe down with my hands I don't dry anything but the outsides of my tanks don't want no rag particles getting into my system.
https://www.420magazine.com/forums/...etual-playground-post2185978.html#post2185978
K

Yes if you have the room freeze like 2 liter bottles and just rotate them out one should last or help get you to night time temp you should be cool enough at night it's just lights on temp. What are you using for a light ? What is your room temp ? What is your humidity at ? Take a picture of your set up like your overall room I might have a solution to help you with that too.
https://www.420magazine.com/forums/...etual-playground-post2185978.html#post2185978 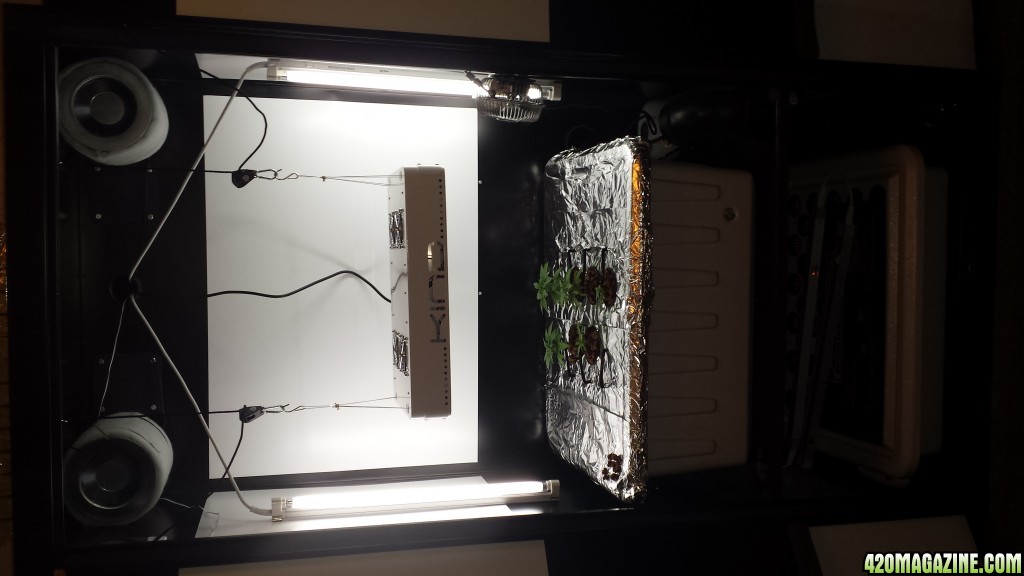 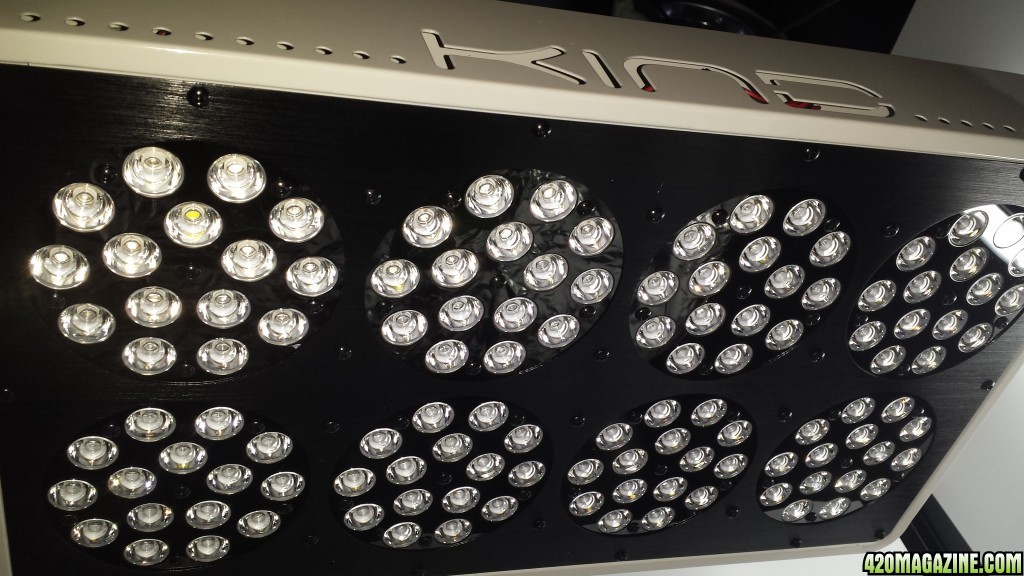 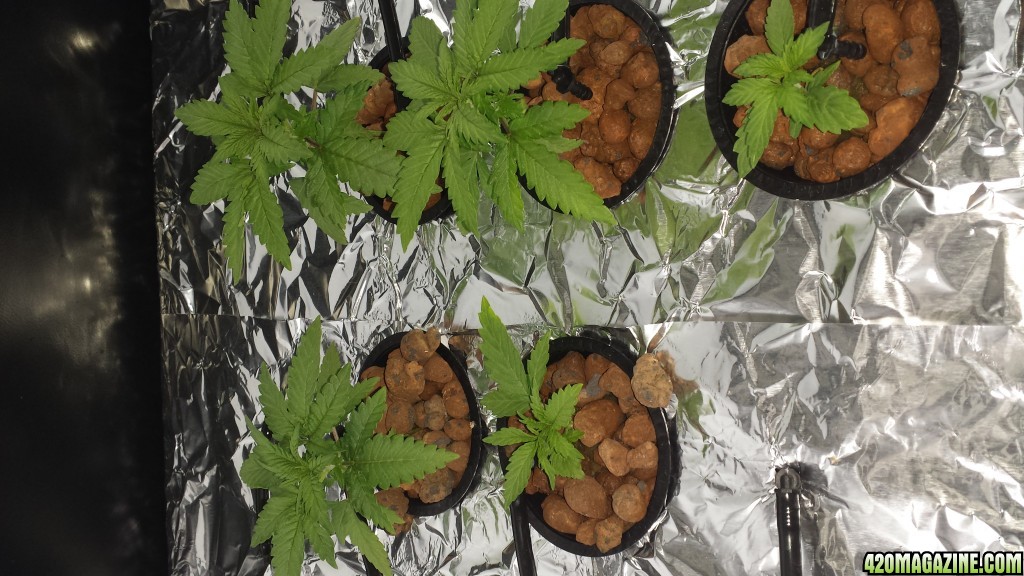 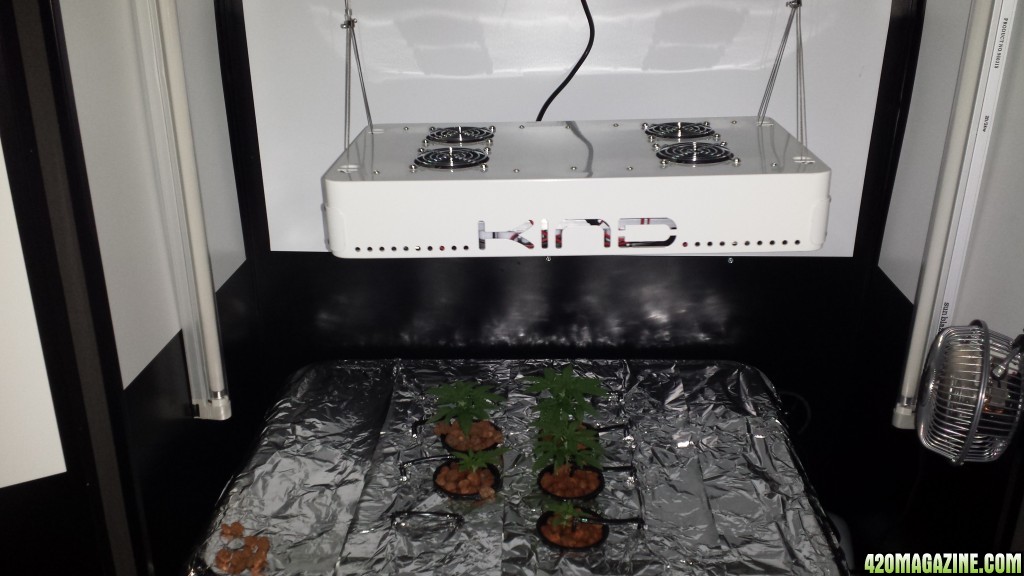 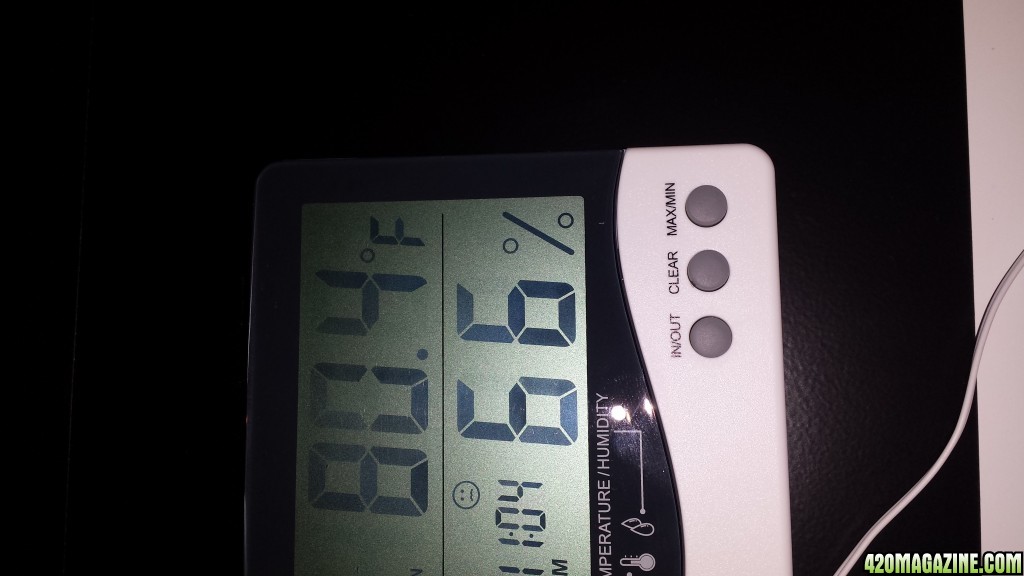 LOL, ya I got the 3% peroxide solution, its a food grade product. Will use this to clean too.

Daughter (adult of course) took these with her phone just now. Running a SuperCloset LED Deluxe 3.0. It's in the spare bedroom, we try to keep clean (dust, vac, etc) and week before setup used insect spray in room. no other chemicals going on now. We have a swamp cooler in use most of the time (southwest US pretty hot right now). There is the large array of LED over plants and 1 t5 on each side on a 18/6 with dark being at night. When you ask room temp are you referring to within the closet or the room? It's been quite hot inside closet with doors shut so have been opening them. Is this a risky move?
i'm not who you think I am.
K

Can you bring you room temp down to like 70 ? I put a big humidifier in my room and it cool my room down during veg flower I had to use my AC to bring it down but with my room at around 70 I didn't have as much of the problem with my 1000 HPS. keeps my floor cool enough to keep my water temp around 68. You gonna finish them out in that container ? Your light is a little close bro you look like your just over foot away you can be like I wanna say around 30'' away. you could spread your plants out more too so your roots don't get tangled up and they fight each other I try to go a foot between plants.
https://www.420magazine.com/forums/...etual-playground-post2185978.html#post2185978

Ok, can do the light raise and give 'em some room, I cant go a foot between but will do what I can. I realize the 5 Biancas in there now will not have room to go to bud and will make arrangements to relocate part of the population. I just don't want to waste some healthy plants. Ya, the container is allegedly designed to go from seed to bud. I've been reading a journal on here (stealthgrow is his name I think) and he grew seed to bud in a SuperCloset with some great results. Bought a small air conditioner for the room and will install in a day or two. I have a good humidifier, should I use that in there as well as the air conditioner?
i'm not who you think I am.
K

Your humidity is fine I would just use the AC, I run my humidifier in the winter and AC in the summer , which is awesome cuz when your in flower and you drop the humidity starting at like 60% then moving down each week I end up around 15 % at the end but your buds get super frosty. You can finish you grow in that tank just need some more space and some nice LST the side lights will come in handy for you I'm sure your light has like maybe a 3X3 footprint? Start LST them to that make sure that's your coverage but then try to stay in that ballpark. Just gotta watch for your stretch
https://www.420magazine.com/forums/...etual-playground-post2185978.html#post2185978

Kola320 said:
You have the beginning of root rot What are you rez temps ??? I would mix ph'd water and just peroxide 5 mm per gallon maybe a little stronger and give them a soak once a weeks you will start to see new bright white roots starting to grow after a few weeks maybe ad to your rez to hope this helps as root rot really sucks later down the road.
Click to expand...

Thank you Kola320, you saved my plants with your knowledge. Huge difference after the 15 min soak last week, plant is going crazy and res change and the 2nd soak is tomorrow. Looking fwd to more knowledge, Stay Safe All.
Always Keep A Journal. That's all I got to say about that.

C
Problems with plant leaves yellow with brown spots dont know what to do.