She will be taken care of by a Raspberry Pi, some sensors & relays and a web interface(MyCodo).
She will be transplanted once, into a 40 Liter bucket aiming for my first scrog. 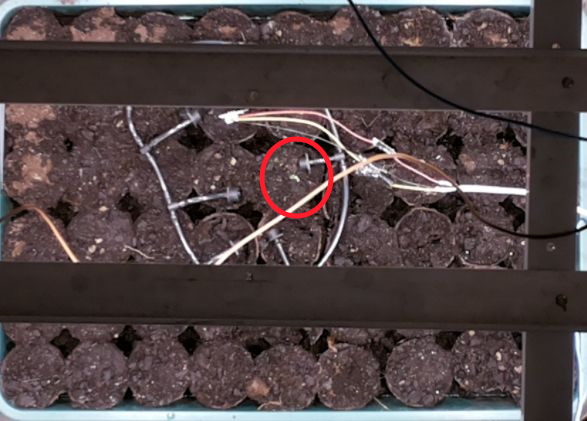 She will be taken care of by a Raspberry Pi, some sensors & relays and a web interface(MyCodo).
She will be transplanted once, into a 40 Liter bucket aiming for my first scrog.

Hey @ducknaldo hope you are well my friend.
Great set up.
Where you been since 2016?
Practicing I see.

mind if I tag along?

Fire Safety : How do you prevent a disaster?

I actually didn´t realize it was that long ago I was active inhere.
I explored Auto SOG, HPA, DWC & automation since then.

Back in 2016 I travelled the world, so I started to look at automation.
Several times I came home to a ruined crop, because something had failed or water ran out.

I managed to get a few good nearly automated auto grows with DWC, but it made the whole setup overly complicated, compared to soil, so I decided to simplify again.
I will add PID controller functionality again with peristaltic pumps for mixing nutes and maintaining PH.

I can control it from anywhere through VPN.

It´s fun, so never mind that I don´t travel anymore and don´t need it
:-D

and btw.
I´m surprised that there´s not more interest in automation on this forum.
Not many threads about it and the possibilities are endless today with all these cheap micro sensors and relays.

Speaking for myself, you have a great setup, but most of us don't have a budget to do what you are doing.

Sponsors
Expert SCROG Grow!
What are common mistakes made by first time growers?
How to get started growing indoors organically - No bottles
How to Grow Cannabis - Everything You Need to Know!

In that case, I dont think people are aware how cheap these parts are.

A Raspberry Zero system with a soil and a temperature sensor and 4 relays can be built for under 100$.
My lights we're expensive to build, but the automation is very cheap indeed.

My tank is just a cheap rainwater barrel.
The most expensive part is the case and one could decide to leave that out and just mount it on a piece of plywood.
V 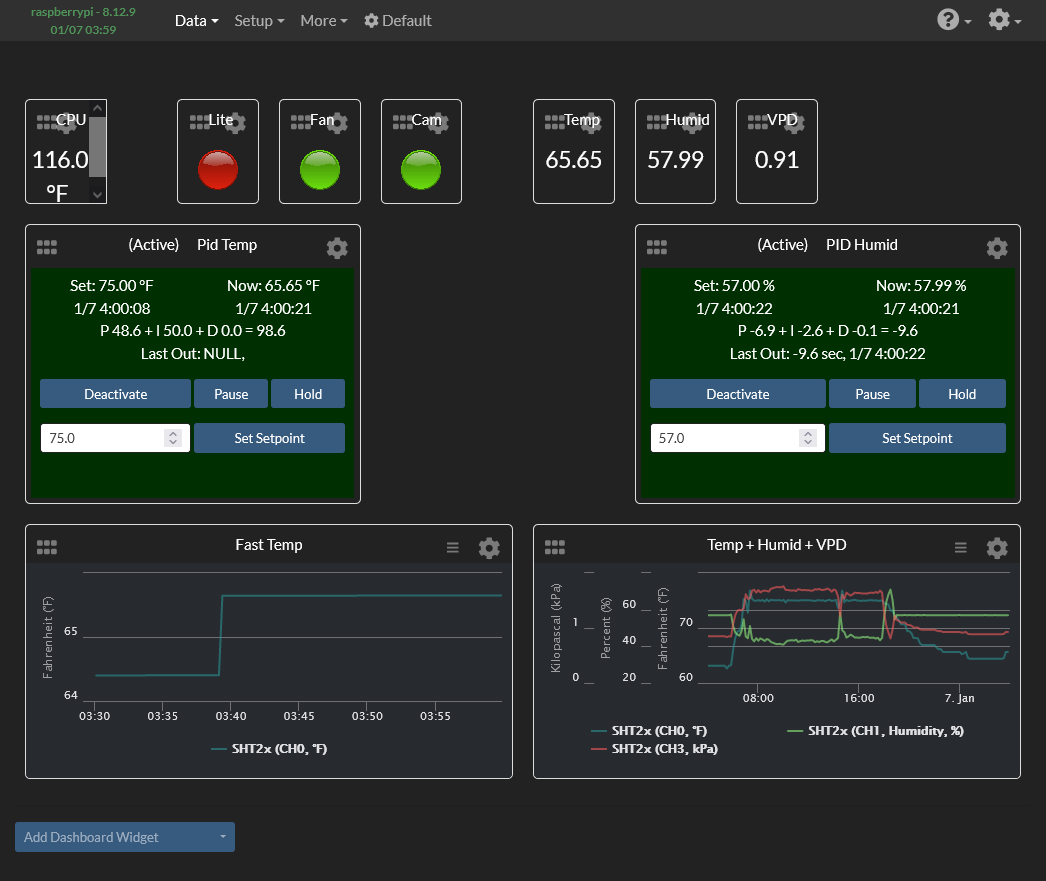 Very cool. Automation is the next thing I’m interested in. I have some things automated with humidity controllers but I wouldn’t mind a tank and some auto watering. I’m home all the time so even a visual water level would be cool although your contactless gravity sensor that sends an email alert sounds cool too.
Reaves Soiless White Widow First Grow Journal (complete)
Reaves Perpetual Grow

Ok, so time for an update.
Not much has happened since the last update
I suspect the soil was bad from the beginning and no run-off led to a buildup of water.
The soil had started growing moss and the plant seem to have suffered
I now repotted it, although this wasn´t my plan from the beginning, but I´ll just have to repot again into the final 40L. bucket.
The new soil feels good and has plenty of nutrients for getting things going.
The pot should give plenty of air to the roots for now.
I will not use an aerated pot for the final one, because water consumption is a concern for me.
I have no direct water line to the room and aerated pots definitely waste alot of extra water through vaporization. 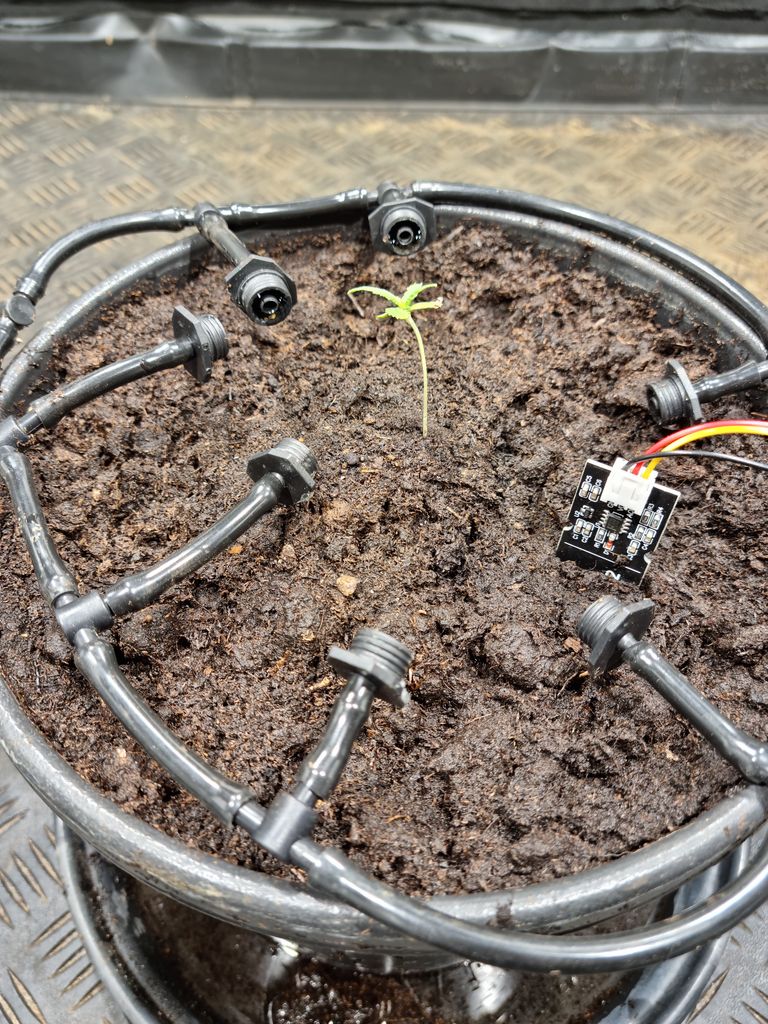 A closeup of the tent setup. 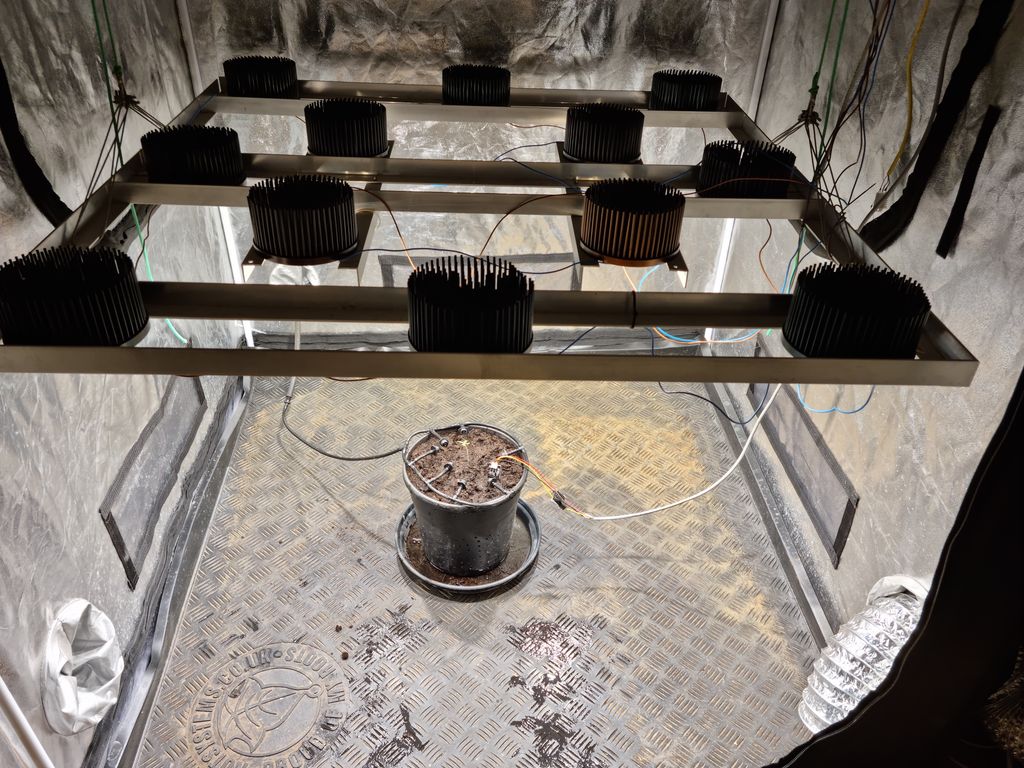 And here the cheap 20$ water alarm/sensor. 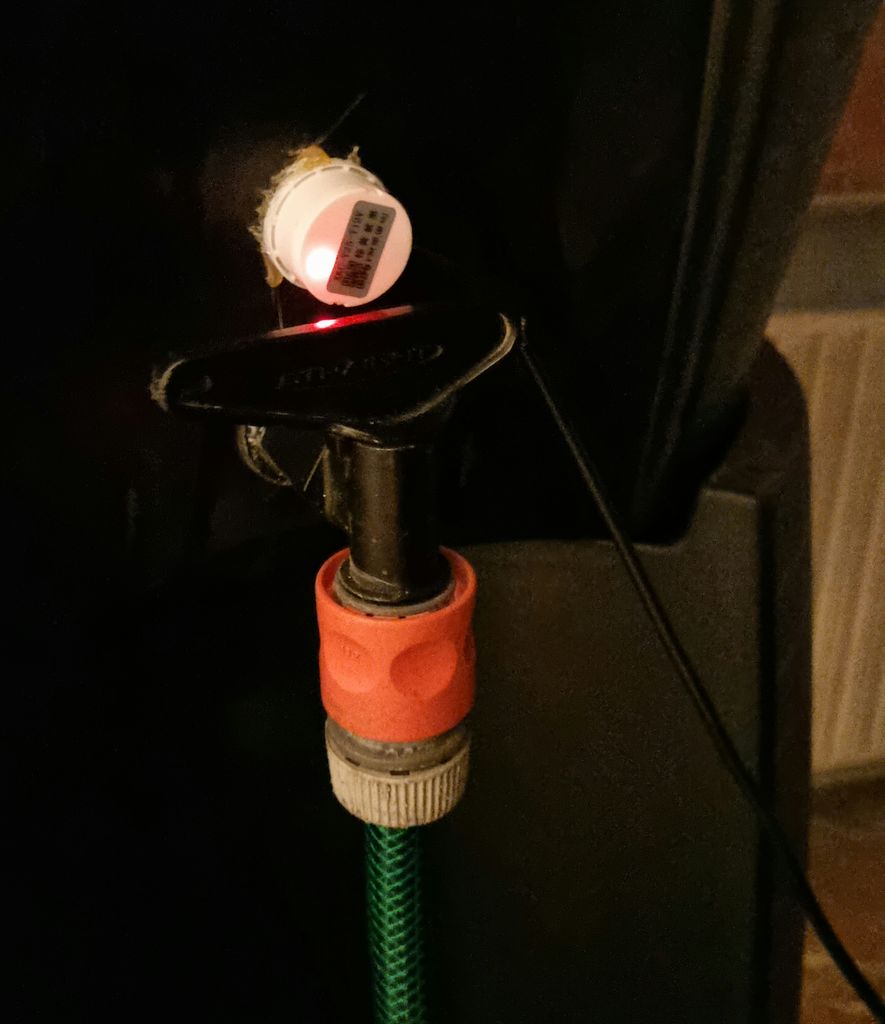 The controller itself is an embarrassment in it´s current condition, but working on my next version already with Mic. connectors for all sensors so they can be easily replaced.
For example the capacitive soil moisture sensor, I´ve had a few of them go bust, because the copper inside it will eventually eat up the coating on the surface.
It helps significantly to reduce the number of measurements taken per minute to 1 or 2 for the soil sensor.
This single part is really the only part that gets worn out in the system.
The rest will pretty much run until the end of times it seems.
The capacitive soil moisture sensor is also cheap (around 4.5$)
For the Raspberry to be able to read it, you also need an Analogue to Digitial converter.
It costs around 14$ and can read up to 3 analogue channels/sensors.
The existing embarrassing existing Controller setup.
Keep in mind it´s only the first prototype and not meant for production. 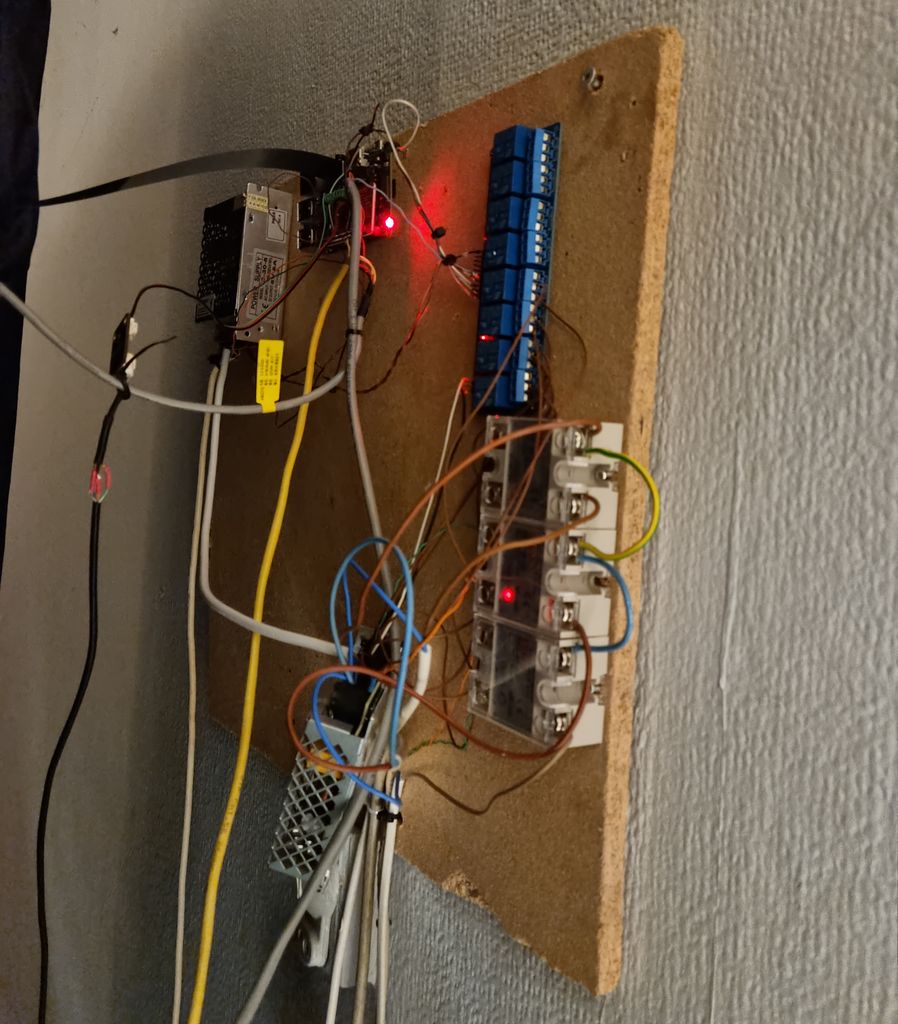 I´m working on a second prototype version with which will get proper connectors for the sensors and standardized connectors, so sensors can easily be swapped or replaced. 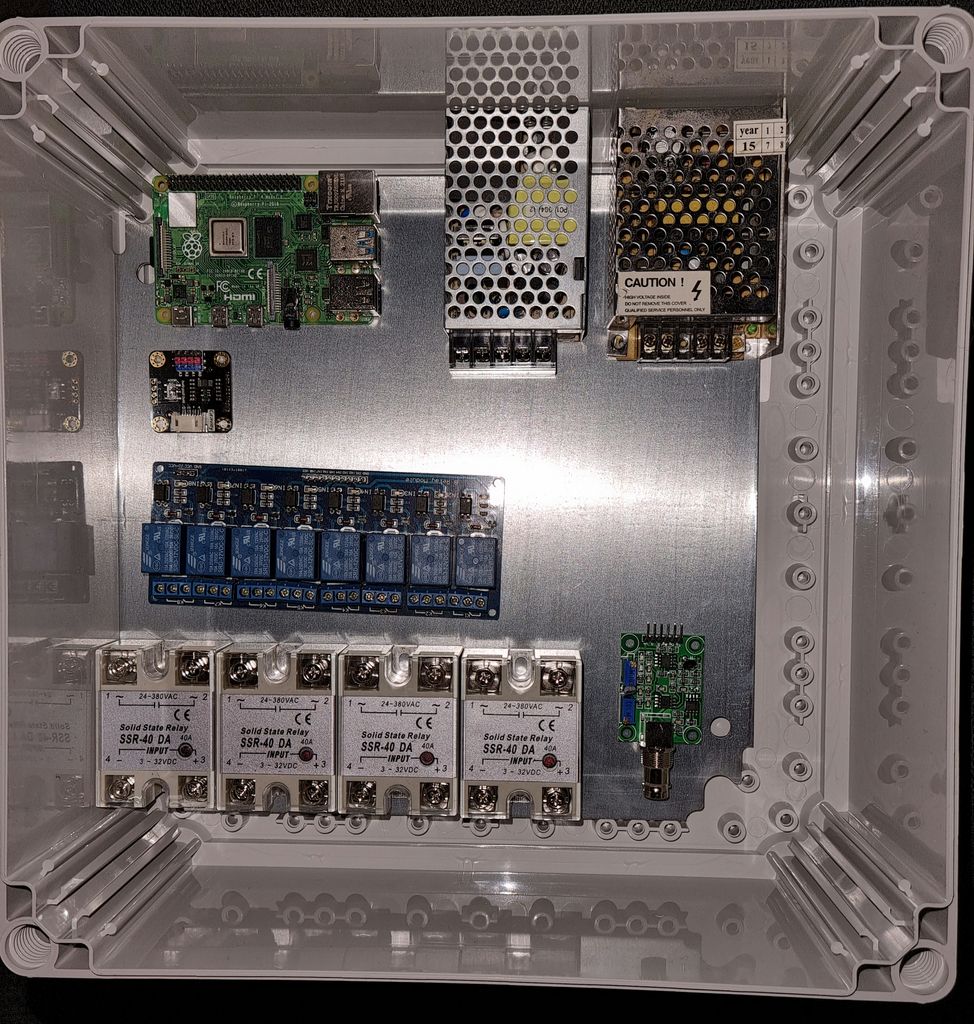 So again, it was more about the technicals, but once the plant grows a bit things will become more exciting.

It will be a challenge to manage a single soil moisture sensor in the final 40L bucket, so I might have to add 2 more of them and average the measurements.
I have a whole box of them lying around somewhere.

Sorry about the lousy plant, but she´ll recover now she´s in good aerated soil.
I´ll keep plentiful watering on, because it´ll be virtually impossible to overwater in the current pot.

Btw. It waters with pure RO water and I plan to continue this almost until flower or if the plant show deficiencies.
Then when in flower it´ll get around 40% Advanced Nutrients 2 part PH perfect or whatever she can take

I used it before in soil and it seemed to work great.

Data collection for the last few days.
Not much to report, but it looks cool

Looking at the soil moisture level, it´s not a percentage of water.
The sensor just reads the increase or decrease in voltage and the computer turns this measurement span into a 0-100 scale, so it makes more sense for us humans to read.
Good to see that it stayed relatively stable during the repotting and stayed in around the same range. 90-92.
It means that the measurements in the new soil can be relied upon.
The capacitive soil sensors last around 2-3 grows for me and that´s before I adjusted the number of readings dramatically down.

Some other runs & tests.

I wanted to test bottom feed, but it never worked out for me.
It used way to much water.
These babies are maturing Dark Devils I think. 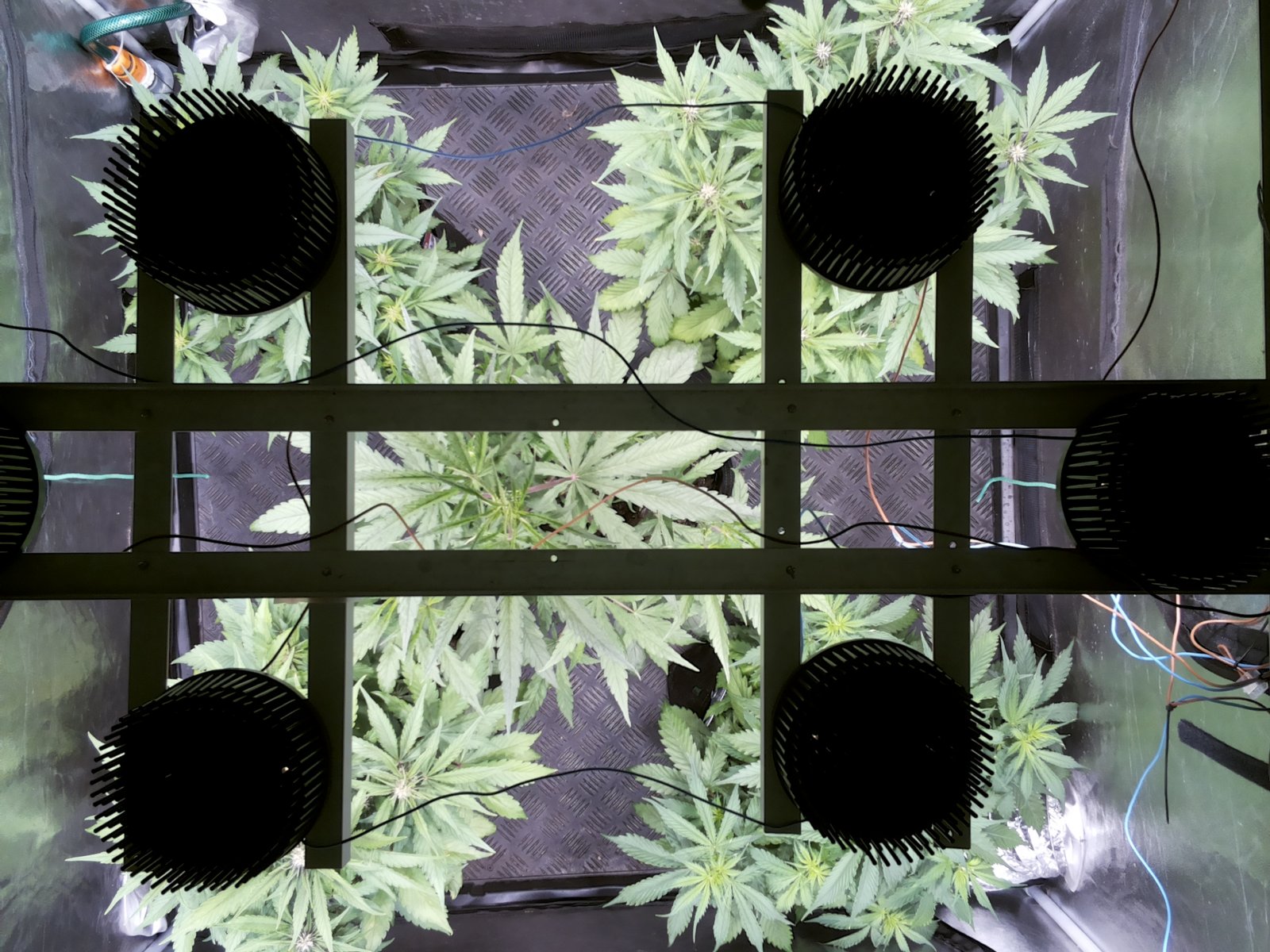 Some hot Naga chilies as well as... 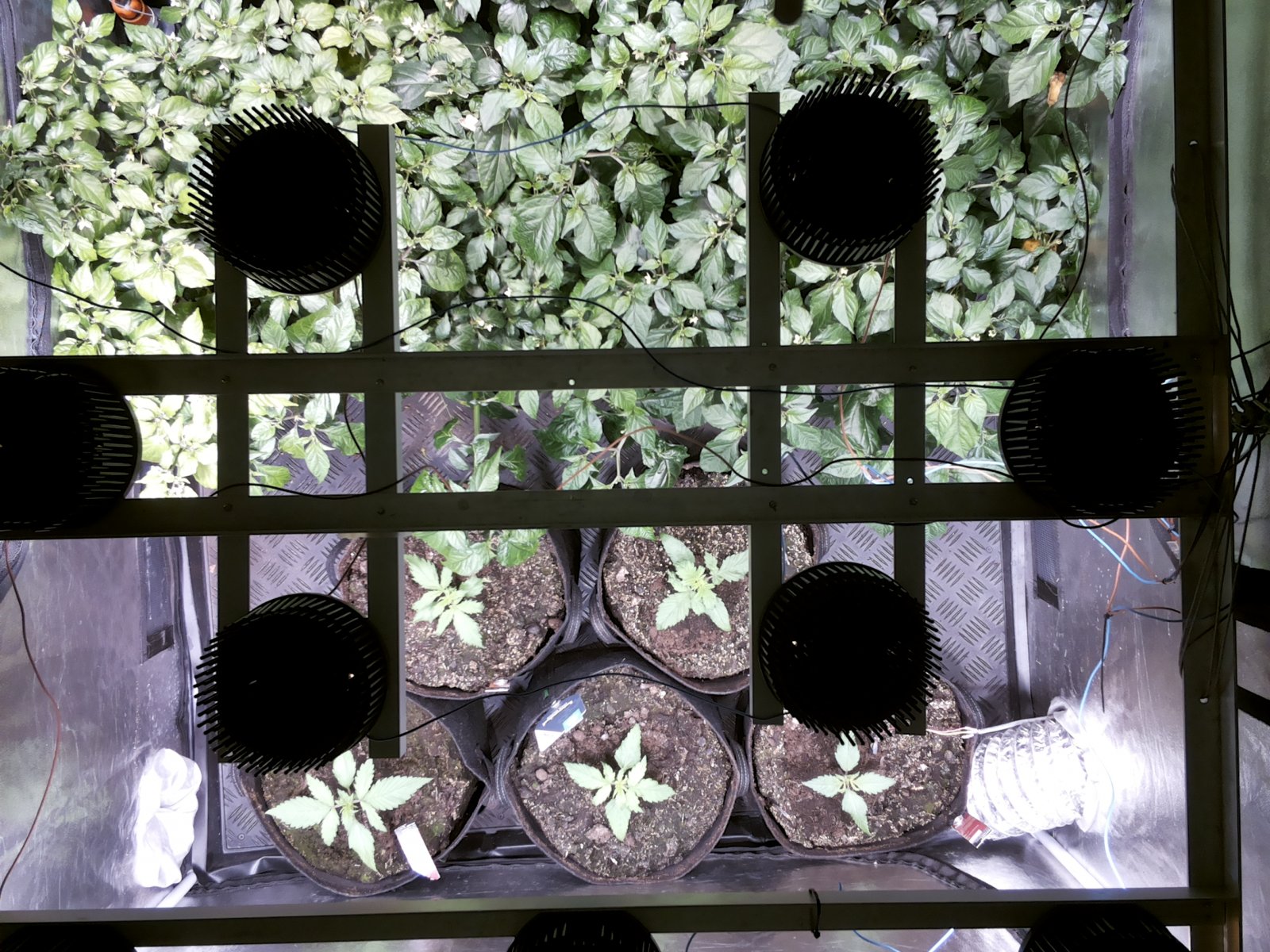 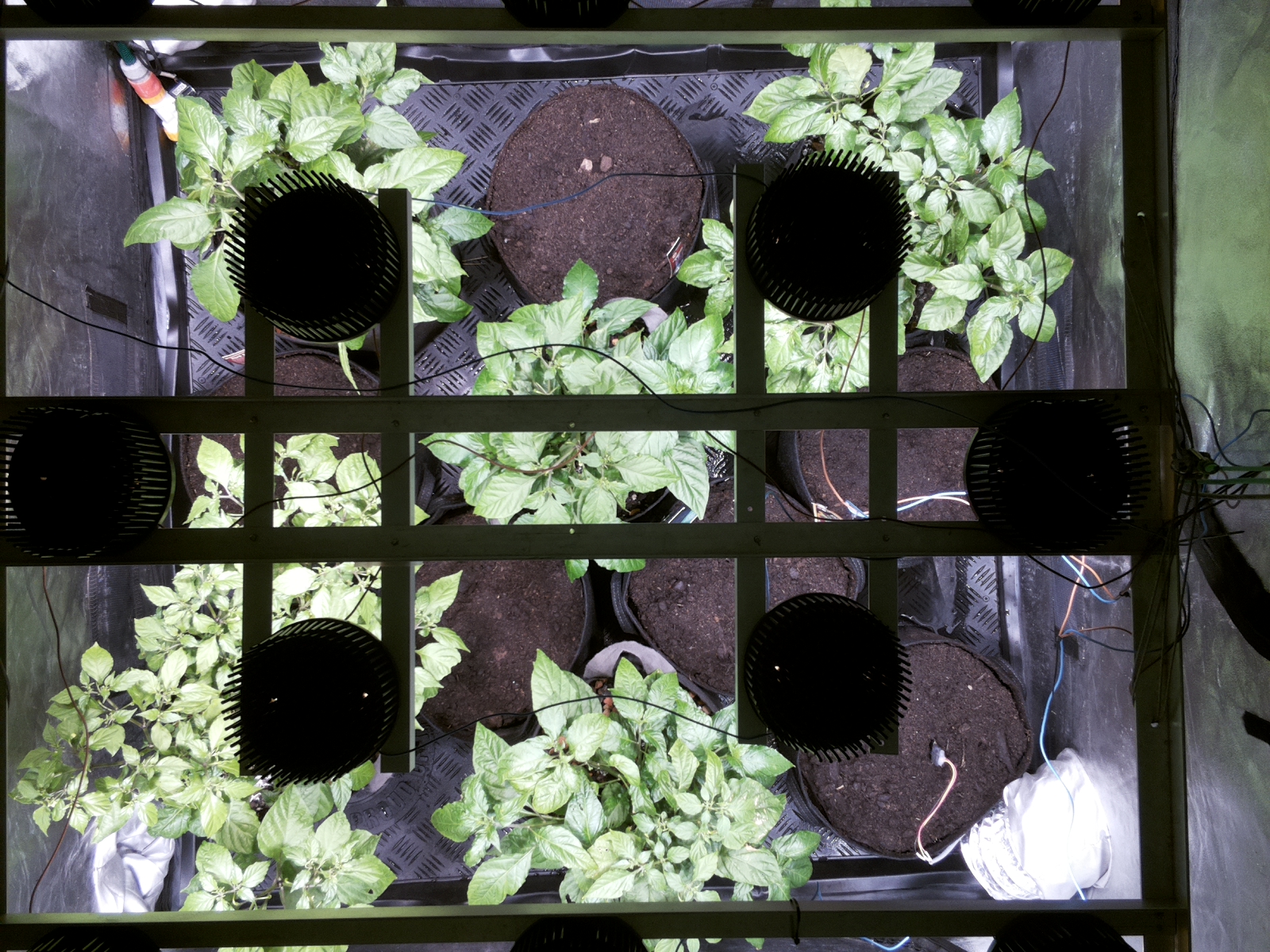 More testing with bottom feed.
The problem with it seems to be that most of the soil is not utilized most of the time.
It´s either that or you really have to soak it and that´s no good either.
As you can see in the lower right corner I measure the soil moisture in the top half of the pot.
From when starting the watering, it takes really long time before any meaningful measurement can be made, which makes it not very well suited for my purposes.
That and the fact that I only have 200 Liters in the tank, I never got it working properly. 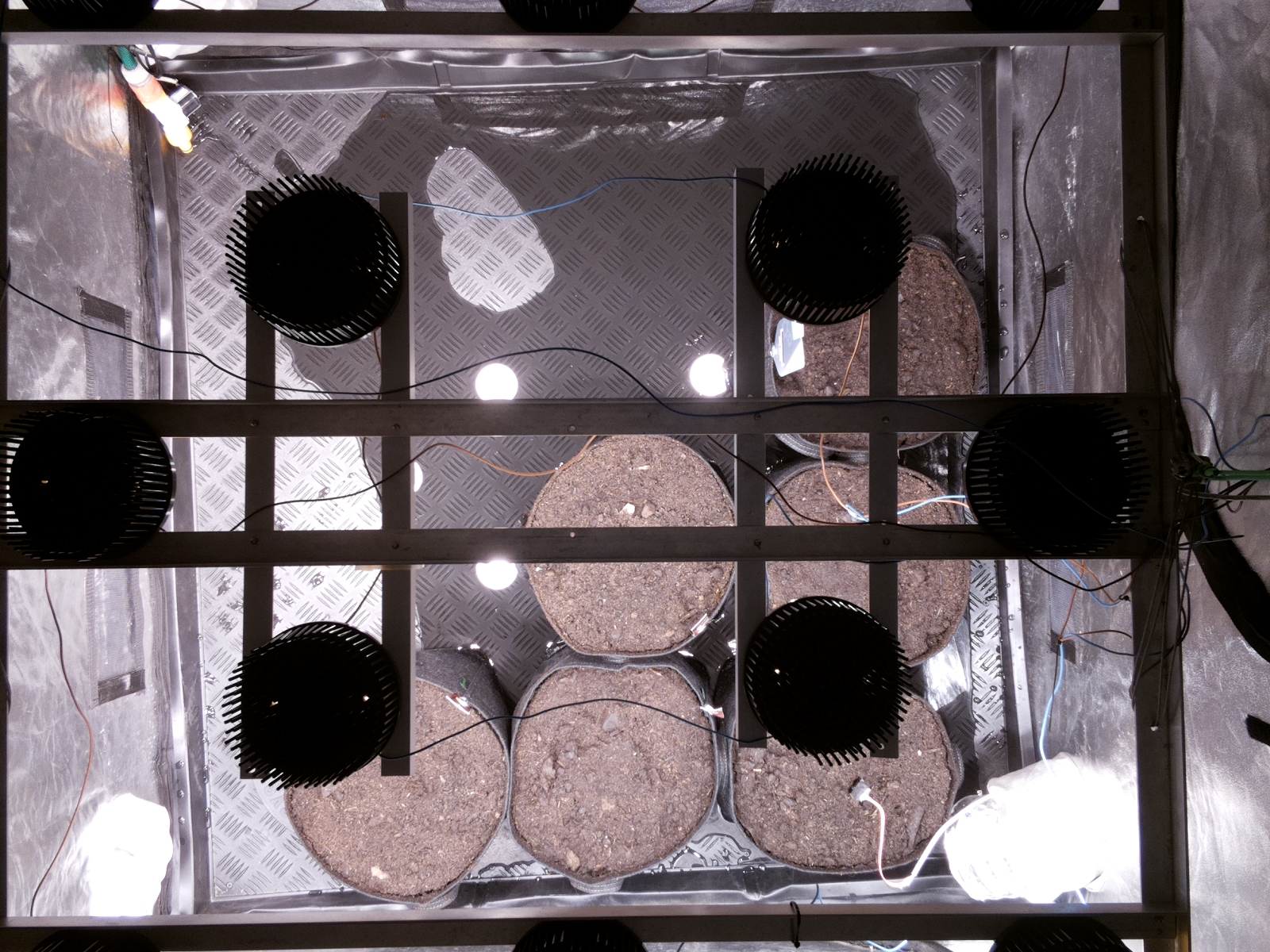 It´s about time for an update again.

The growth of the plant has ben stunted for a long time, due to overwatering while seedling and I sprayed ashes from my fireplace on top of the soil.
It really didn´t like that and seemed to almost be dead for weeks.
When it recovered One side was more severely stunted than the other.
Although I believe it has fully recovered, this explains why one side of the plant is larger than the other.

I´m starting to weave it into the net now, which is fun

I guess I have around a month of veg and tucking before it completely fills the net.
I´d like to grow it as big as possible before flowering.
On a side note.
I think I will go back to 4 plants, no matter which growing system I decide on for the next grow.
It simply takes too long to veg, in soil at least, to this side.
Bear in mind that I stunted it, but still.
It takes a while.

I´ve finished my prototype Raspberry Pi controller box with proper connectors, so sensors can easily be replaced if necessary.
It has been showing great reliability and it´s a joy to be able to follow it from anywhere and with this kind of information and control level.
It´s just ...great 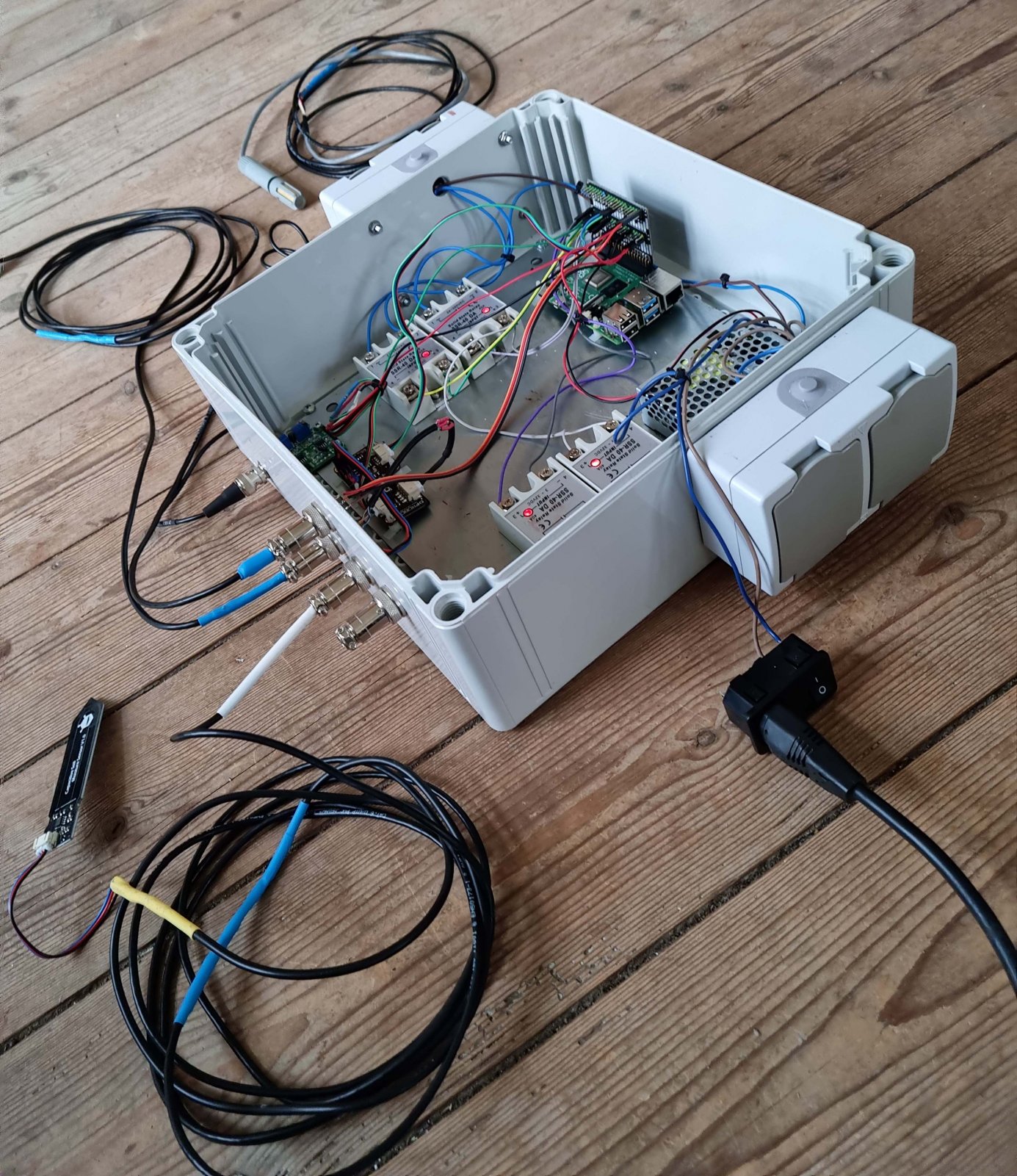 Only the computer has been watering the plant and everything has worked flawlessly since I started it up.

Tank PH has no reading, because the probe is not attached.

As it´s my first scrog any tips or tricks will be welcome.

It´s a nice visualisation of you plant drinking, evaporation and refill.
It can clearly be seen that the plant is drinkng alot more.
It waters for 180 seconds at the time now, but I´ve adjusted it from 60 to 120 and now 180.
When the waterings are becoming too frequent, I adjust the watering time upward again.
The aim is to water every 2 days and that´s pretty much dialed in.

Not much to report here.
Huge swings can be seen just after watering.

I guess that was it for this update