On a Saturday evening in late July, the smell of cannabis perfumed the air of a sprawling Rohnert Park office park. A small fleet of German luxury vehicles and at least one Aston Martin filled the parking lot, while a professional photographer stood stationed on a green carpet outside a low-slung, nondescript building, ready to immortalize the almost 200 people who had paid $175 a head to attend the first-ever NorCal CannaCuisine Gala.

Out back in a small redwood grove, a band called Moonalice played "It's 420 Somewhere" as a young woman in a hemp plant-patterned leotard twirled languidly around a stripper's pole and a crowd sipped non-alcoholic cocktails, each endowed with 2.5 mg of THC. Jacob Freepons, the founder of an Oakland hemp juice concern called Kanna Botanicals, doled out samples of green juice. "It won't get you high," he said. "My daughter drinks this, and she's 3 years old." He was in talks, he added, to sell his $10 bottles of green juice at Whole Foods. "Hemp is gonna find its legs," Freepons said. "It's gonna be huge."

Sonoma is home to some 5,000 cannabis operators, but they have long existed in the shadows of both the county's wine industry and the mighty Emerald Triangle formed by Humboldt, Mendocino and Trinity counties to the north.

But Sonoma is beginning to emerge as a cannabis scene in its own right, thanks in part to a strong community and a host of new and sophisticated entrepreneurs like those at the CannaCuisine party. There's a particular Sonoma vibe going on, with products marketed using terminology more commonly applied to food: organic, clean, biodynamic and great for pairing with wine.

The crowd settled in for a three-hour, three-course dinner prepared by Jeff the 420 Chef. The Los Angeles chef was introduced by the gala's organizer, Elise McRoberts, as "the Julia Child of weed." Each of Jeff's courses could be ordered infused or cannabis-free; personal preferences aside, McRoberts said, "We're here celebrating cannabis while honoring activism."

As waiters served martini glasses of watermelon gazpacho, Steve DeAngelo, the co-founder of Oakland's Harborside and one of the evening's honorees, addressed the crowd. "Sonoma County is the cradle of cannabis culture, and we're getting ready to experience the emergence of this culture that's been underground," he said. "Thank you for putting together something really classy for cannabis to emerge in a social space."

"There's a new wave of businesses and farmers, and a professionalism at the new facilities," said Erin Gore. Gore is the founder and president of Garden Society, a year-old edibles company whose low-dose confections are made with local, organic ingredients and bear the label "chef inspired"; the idea behind them, Gore said, is to create "an approachable way to cannabis that tastes delicious."

Many of her products are designed to appeal to women; she described her typical customer as a middle- to upper-class well-traveled professional. "We're trying to take a wellness approach," she said. "You have yoga and vitamins; cannabis is just another tool in the arsenal to help you manage the rigors of life."

Gore was involved with both the CannaCuisine Gala, where she handed out samples of her wares, and the Ellipses Elevated Evening, a cannabis-and-wine-pairing dinner that took place at a private Alexander Valley vineyard estate also in the summer. The main point of that invitation-only event, which was held a few days before the Wine & Weed Symposium in Santa Rosa, was to introduce members of the wine and cannabis industries to each other, says Devika Maskey, one of the dinner's organizers and the co-owner, with her husband, Jonathan, of the Ellipses Wine Company.

"I have a lot of wine industry friends who were curious about the cannabis scene, and skeptical and nervous about how it would impact the industry," Maskey said, "so we wanted to throw a social event so people could get to know each other from both sides of the spectrum." Maskey, who is about to launch TSO Sonoma, her own cannabis brand, also wanted a chance to "showcase Sonoma," she said. "Most people, when they think about cannabis, they think about Humboldt. We wanted to show Sonoma has great products."

And so for the dinner, Maskey enlisted other cannabis companies whose operators create what she called "clean, pure products marketed at the general population. " In addition to Gore, Alicia Rose, the founder of HerbaBuena in Napa, was on hand to offer micro-dose herbal elixirs and organic, certified-biodynamic flowers, while Samual Edwards, the co-founder of AYA by Sonoma Cannabis Co., paired wines with his line of sustainably grown, naturally concentrated cannabis nectars.

Although Maskey knows other people who are organizing cannabis pairing dinners, it remains illegal to hold them as public events on public property. "I don't think we'll be seeing larger events for a while," Maskey said. "But I think there's demand for it because people are just really interested in the pairing of" cannabis and wine.

But here's the rub: In a place all about its Sonoma-ness, there's no easy path for a cannabis business trying to engage all Sonoma. Thanks to constantly changing state and local regulations, the cost of permitting, and a recently implemented zoning law forbidding commercial cannabis cultivation on large tracts of land outside city limits, running a cannabis business in Sonoma is fraught with challenges.

Annie Holman, the proprietor of Derby Bakery, a 3-year-old edibles company, has considered moving her production facility to Sacramento because of the dearth of available permitted locations in the county. With temporary bans on cannabis activity in cities like Rohnert Park, Sonoma and Petaluma, she isn't convinced that the county is the new epicenter of cannabis culture. "I would say it's a satellite, maybe," she said.

Still, she's encouraged by the cannabis community in the county and the efforts of the Sonoma County Growers Alliance, a Santa Rosa advocacy organization. "All the people in this industry are awesome," Holman said. "They're incredibly supportive. All my friends are making edibles, but none of us are afraid to share information. It feels like there's room for everybody."

And for all the challenges in the county, many operators see the made-in-Sonoma label as a way to add value to their products. Being based in Sonoma, says AYA co-founder Edwards, is "really attractive for our branding and our ethos; our three main selling points are that AYA is Sonoma-grown, it's organic, and it's pesticide free."

Edwards is a third-generation Sonoman, as is his business partner. Although they nearly moved their company to another county because of tax issues and have spent many thousands of dollars to meet permitting requirements, they wouldn't dream of living anywhere else.

"We love it here," Edwards said. "It's awesome, there's an amazing growing climate, and Sonoma also happens to be one of the first counties in the state issuing cannabis business licenses. It's the best of all worlds." 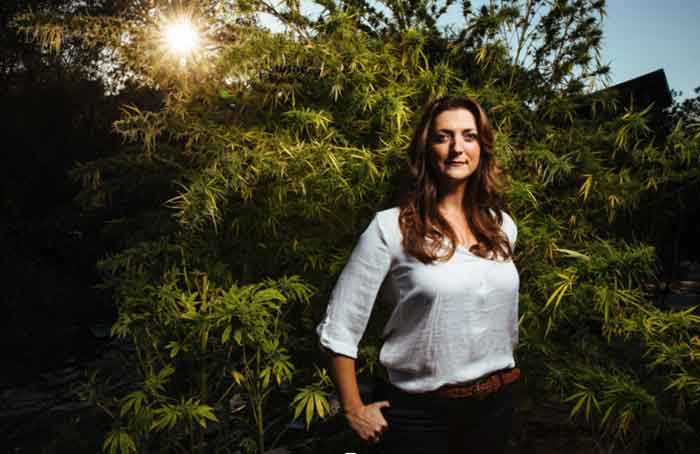 Pairing Wine And Weed: Is It A California Dream Or Nightmare

California Finds 'Pot Of Gold' In Wine And Weed

K
Marijuana In Wine Country - A Look At The Black Market, Prop 64, And Pot Appellations