A last-day change in the application process that allowed people registering cannabis farms to turn in their paperwork and have it stamped by county workers for review at a later time relieved the anticipated crush of people trying to beat the deadline at 4 p.m. on Thursday.

Calaveras County Planning Director Peter Maurer was clearly relieved when his wristwatch passed the 4 p.m. mark. He said there appear to be as more than 700 applications and 25 percent of those might fail to pass muster.

As clocks throughout the county government center swept to 4 p.m. and beyond, an expected crush of applicants was absent. There was an orderly process of assembling paperwork and having it reviewed by volunteers organanized by the Calaveras Cannabis Alliance.

An orderly process on Thursday replaced a crush of applications on Tuesday. By Thursday, the process was streamlined to simply dropping off the paperwork, having it stamped and paying the $5,000 fee. Maurer said review would take place after the deadline.

Two tables were set up by volunteers: one outdoors in the courtyard and one just inside the front door. The final numbers could exceed by far an estimate of 200 registered commercial farmers that was put forward in mid-May by both the Planning Department and spokesmen for the CCA.

The final estimate more than triples Maurer's estimate of 200 registrants when the Board of Supervisors passed on urgency ordinance on May 10 to regulate medical cannabis production in Calaveras County.

"We're so busy that we're telling personal and caregiver growers to just stay away," Maurer said. "They can come back after the deadline. But for now we are absolutely slammed by commercial grow applicants."

Those growers who didn't register with the county by Thursday will be unable to get state permits that will be required in 2018. Without state permits, growers will not have access to commercial marijuana sales, which will be controlled by a system in which products are bar coded and tracked from farm to store.

The urgency ordinance to regulate Calaveras County medical cannabis production — both for commercial producers and personal and caregiver growers — requires a $5,000 registration fee for commercial farmers, along with a detailed and comprehensive application package.

When the board passed the ordinance, several supervisors, most of whom are normally impassive, displayed expressions of interest when Maurer suggested that if 200 people or firms registered that would mean $1 million delivered to the county coffers. By state law, the funds are limited to management, law enforcement and code enforcement of the urgency ordinance.

Estimates of the final number of commercial registrants have grown steadily since mid-May. In mid-June, a Planning Department spokeswoman said she would not be surprised at 250 registrants and last week, Calaveras Cannabis Alliance president Caslin Tomaszewski suggested a final number could be between 400 and 500.

The alliance has provided a series five of compliance workshops for commercial growers; the first was on June 6 and final workshop was held on June 22 at the San Andreas Town Hall. On June 22, Tomaszewski talked nearly 40 people through the county application process line by line.

At 500 registrants, the county's revenue from permits jumps to $2.5 million. If Maurer's prediction is correct, 600 to 700 registered growers would raise between $3 million and $3.5 million.

"Some are coming in with checks, but I've been here since this morning and most are bringing cash," said Sheriff's Reserve Officer Jack Chew. 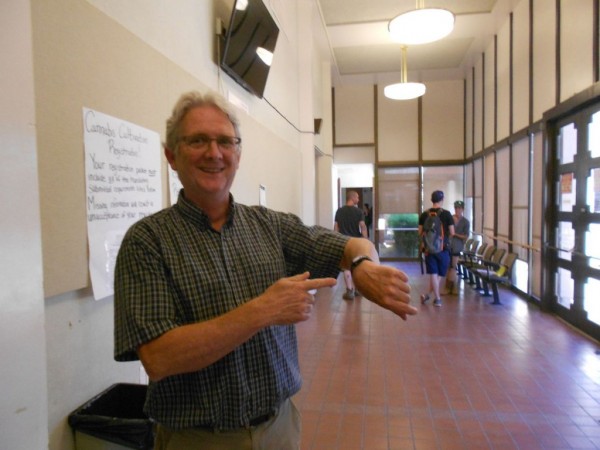