Shasta Lake - A group of doctors spent several hours Saturday discussing medical cannabis, its benefits and other issues surrounding marijuana before an audience of about a hundred people.

The third Canna We Talk event was organized by Tammy Brazil, owner of the Queen of Dragons medical marijuana dispensary in Shasta Lake.

Among the many topics aired during the more than four hours of presentations were the positive effects of cannabis in medicine, including treatment for cancer, pain relief, post-traumatic stress disorder and other conditions.

Also discussed at length - and particularly relevant to the North State - was the effect of cannabis on opioid addiction and treatment.

"I think a lot of people don't necessarily know that they have this choice, but i would like them to know it," Dr. Dustin Sulak said.

Opioid use and abuse has been rising locally. According to the California Office of Statewide Health Planning and Development, the number of opioid-related hospitalizations in Shasta County in 2011 was 390, the following year it was 548, and in 2013 it was 631.

Aegis, a company that runs opioid treatment clinics throughout California, is looking to open a satellite facility to its Chico clinic in Redding. Local public health and law enforcement leaders have embraced the possibility of expanding treatment in the area to help people curb addictions and relate crimes.

"We have a really big problem in Shasta County with opiate addiction, with people going on opiates for a really long time," Brazil said.

Sulak, who founded a company that operates three medical facilities in New England, said cannabis can increase the pain-relieving effects of opioids with lesser doses. It's also safer and less likely to be abused than methadone and buprenorphine, the current go-to drugs for opioid addiction treatment, Sulak said.

"It's just incredible how safe this medicine is," he said.

Saturday's presentations also came as voters will soon be asked whether to approve a ballot measure that would decriminalize recreational use of marijuana. Proposition 64 would also establish new taxes on recreational marijuana, license and regulate the supply chain and potentially reduce sentences of those convicted of past marijuana crimes.

It would also allow local governments to continue restrictions of marijuana businesses. Shasta Lake is the only place in Shasta County that allows dispensaries.

Canna We Talk also featured a live band and booths from an eclectic group of community organizations, including local dispensaries and advocates for the state of Jefferson movement. 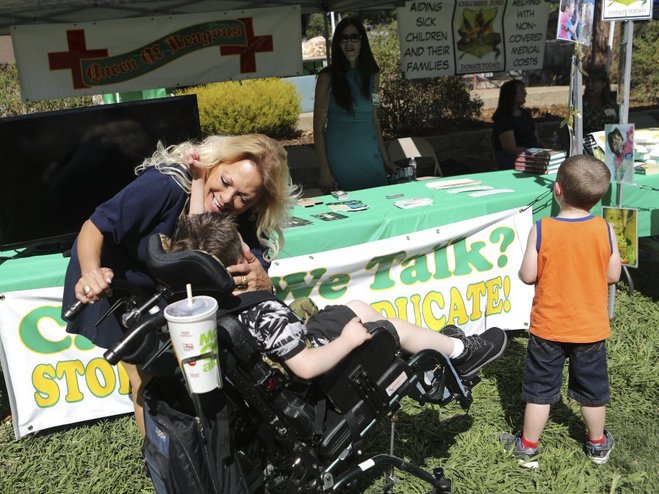