"I guarantee you the city will not look the same in three years," said Heather Coladonato, the president and CEO of the Desert Hot Springs Chamber of Commerce, before the event started. "It's time we get to shine and no longer blow away in the wind."

While the health benefits of medical marijuana were discussed, revenue was one of the major talking points throughout the evening.

"With the cannabis coming in and the influx of revenue to the city, the city's gonna have a lot of money to do things with," said Jason Elsasser, who is developing a large-scale cultivation facility that will be located in the city. "We want to light this city up. We need streetlights. We need social programs. We need a lot of different stuff."

Desert Hot Springs turned to medical marijuana in 2014 as a way to remedy its ongoing financial troubles. It's one of the first cities in California to allow large-scale marijuana grow operations, with 11 cultivation projects already approved and eight more in the process of being approved. Desert Hot Springs officials estimate that, so far, the total square footage approved for medical marijuana operations within city limits is around 2 million square feet.

"It was an opportunity to do something good for this community -- that is a disadvantaged and under-served community," said Desert Hot Springs City Manager MartÃ­n MagaÃ±a. "I saw an opportunity, not only could we benefit patients but we could help the city in terms of revenue." He cited the need for parks and better infrastructure, which would be upgraded as a result of the influx of revenue from the taxes derived from the medical marijuana ventures in the city.

"We want to turn this city around and give it an opportunity that all the other cities have," MagaÃ±a said, to applause from the audience.

MagaÃ±a added that City Council authorized him to hire a project manager, who would be responsible for handling the challenges of installing and paying for infrastructure in areas where the grow operations are setting up. Those areas currently lack a number of things including sewers, water, electricity and sidewalks. MagaÃ±a said he hopes to hire a project manager within the coming weeks.

Overall, the mood during Wednesday night's meeting was positive. Matas said the grow operations would lower Desert Hot Springs' unemployment rate, as the city has required that Desert Hot Springs residents make up 20 percent of the overall amount of employees these ventures hire. He added that these operations will also boost the city's image.

"Picture that in about 10 years. If everybody stopped today and nobody else was going to build, 1.7 million square feet are gonna be built. How much money is that?" Matas said. "Just on the $10, let's not even talk about the $25. That's $17 million Desert Hot Springs could be taking in. Our budget is $14 million."

The room was filled with about 100 people. Sitting in the crowd were Cheryl and Don Baker, medical marijuana patients. Cheryl said she turned to medical marijuana because she has fibromyalgia and is in constant pain. Her husband Don, another patient, is a Vietnam War veteran who suffers from the effects of Agent Orange and who has been diagnosed with post-traumatic stress disorder.

"All the doctors wanted to provide him with was narcotics," Cheryl said. "We don't want that. The difference has been unbelievable."

Cheryl buys her medical marijuana from Green Leaf Wellness, a dispensary owned by Thom Miller, one of the forum's panelists.

"I like the thought of Thom being able to grow," Cheryl said. "I know where it's coming from. And money wise, this town needs this. Look at the income it's bringing in. Look at what we can do."

Elsasser, the grower, said he is really excited to set up a facility in Desert Hot Springs.

"Desert Hot Springs is doing something no other city in California is actually doing," he said. "It's really cool to be here." 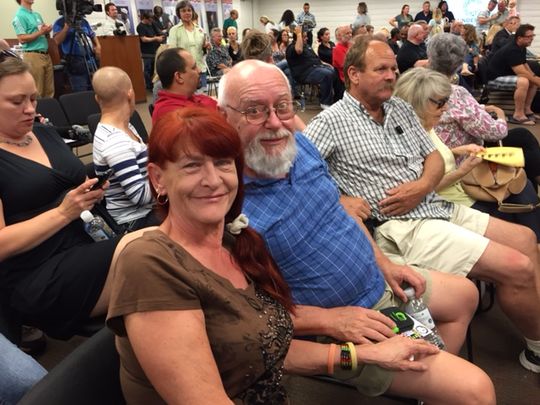