San Diego - More than two years after San Diego approved legal sales of medical marijuana, the city has just eight dispensaries — far fewer than predicted — with no others even close to opening.

Medical marijuana advocates blame the relatively small number primarily on restrictive city zoning and regulations, but six dispensaries got final city approval months ago yet still haven't opened for a variety of reasons.

The struggles could mean recreational marijuana, which state voters might approve on the November ballot, could be harder to find in San Diego than in many other cities.

The relatively small number of dispensaries is also being blamed for the persistence of dozens of illegal or "black market" pot shops across the city.

Critics say that if there aren't enough legal dispensaries to serve an estimated 100,000 medical marijuana patients across the county, then patients will continue to rely on the illegal shops despite them having no standards for product testing or security.

City officials also call the illegal shops dangerous because they don't conform to zoning rules designed to ensure businesses selling marijuana are far away from housing, schools, parks, churches and other sensitive uses.

City regulations allow 36 dispensaries, a maximum of four in each of nine council districts.

Because of restrictive zoning and other regulations in the ordinance San Diego adopted in March 2014, medical marijuana advocates predicted only about 20 legal dispensaries would end up opening.

A year later, that number had been whittled down to somewhere between 12 and 17 because of new problems and roadblocks faced by applicants, such as being disqualified by the proximity of little-known "open space" areas that city officials designated as parks.

In one way, those predictions appear to be about right. Fourteen dispensaries have gotten final approval and a 15th appears likely to follow suit later this summer.

But in another way, those predictions were significantly off because six of the 14 approved dispensaries haven't opened many months after getting final approval.

Some have run into typical problems faced by any business, such as construction snafus, money problems or city rules regarding the striping of parking lots.

Others have faced more unusual challenges, such as key people dying, landlords getting cold feet or building associations banning dispensaries by updating codes, covenants and restrictions.

And while financial problems aren't unusual when starting a new business, some applicants have complained they ran out of money because obtaining a city permit ended up being much more expensive than they expected.

"Every one is its own story," said Jessica McElfresh, an attorney representing three of the eight dispensaries that have opened. "I think the reasons are pretty unsexy. I had hoped more dispensaries would be open by now, but this happens with these kinds of projects."

A dispensary approved in March 2015 for 8888 Clairemont Mesa Blvd. is the subject of ongoing litigation, with the landlord being sued for $3.2 million because he backed out of the lease shortly after the dispensary got its initial city approval.

The landlord says breaking the lease was warranted because of city-imposed restrictions on the dispensary the applicant agreed to - without the landlord's consent - after the lease was signed.

Rogers said he's hopeful there might be a settlement that would allow the dispensary to open eventually. But he also said the litigation has been complicated by the death of the dispensary permit owner.

Another dispensary approved in December 2015 for just north of the Washington Street trolley station has been delayed because the applicant has ambitious plans, Rogers said.

"They are taking time to fully construct the building because they view this as a long-term business and want to invest a lot of money to make it a nice place," he said.

Another dispensary approved in July 2015 for 4645 DeSoto St. in eastern Pacific Beach may be taking a similar approach. McElfresh said the applicants had to demolish part of a building as part of construction.

A dispensary approved for 1028 Buenos Avenue in April might not be facing any unusual hurdles. It typically takes a few months for approved dispensaries to open because sites must undergo city inspections and employees must pass background checks. But the applicant hasn't submitted some city paperwork crucial to the process.

A dispensary approved in December 2015 just southeast of downtown in Stockton recently began background checks. The intended operator of the dispensary changed after city approval, complicating the process.

A dispensary approved in July 2015 for 8863 Balboa Ave. in Kearny Mesa faces perhaps the steepest path to opening.

The site is in an office building jointly owned by tenants, and the owners association decided to forbid dispensaries after the applicant received a city permit. Also, in an apparently unrelated development, the applicant committed suicide.

Prospects appeared to improve this spring for three additional dispensaries beyond the 14 approved, when a comprehensive update of city codes made it easier to open dispensaries within 1,000 feet of schools, parks and other sensitive uses if there is a freeway, wall or some topographical feature in between.

But only one of these three, a dispensary proposed for 3455 Camino del Rio South in Mission Valley, is being recommended for approval by city planners.

That dispensary is within 1,000 feet of Indian Hills open space park, but because of differences in elevation the dispensary meets the new city guidelines.

Two other dispensaries in Grantville - one at 4417 Rainier Ave and one at 4410 Glacier Ave - initially seemed likely to benefit from the new rules.

They are within 1,000 feet of a riparian open space area behind the Black Angus restaurant on eastern Friars Road, but Friars Road creates a separation that meets the city's new criteria.

However, they no longer meet zoning criteria for dispensaries thanks to a recent re-zoning of much of Grantville when the City Council adopted a new community plan for the area.

Because their dispensary application was already underway during the rezone, they can continue. But they must use the version of the municipal code that was in place at that time, a version that didn't include the exemption from the 1,000-foot rule if a freeway, wall or topographical feature is in between.

City planners are recommending both proposed dispensaries in Grantville be rejected.

No additional dispensary applicants have entered the city's approval pipeline.

"Our group expects still more will eventually open, and that there will be enough dispensaries to serve patients even if we don't reach the maximum 36 allowable citywide," the group said in a joint statement.

They also reiterated requests that the city crack down on black market pot shops and illegal delivery services. 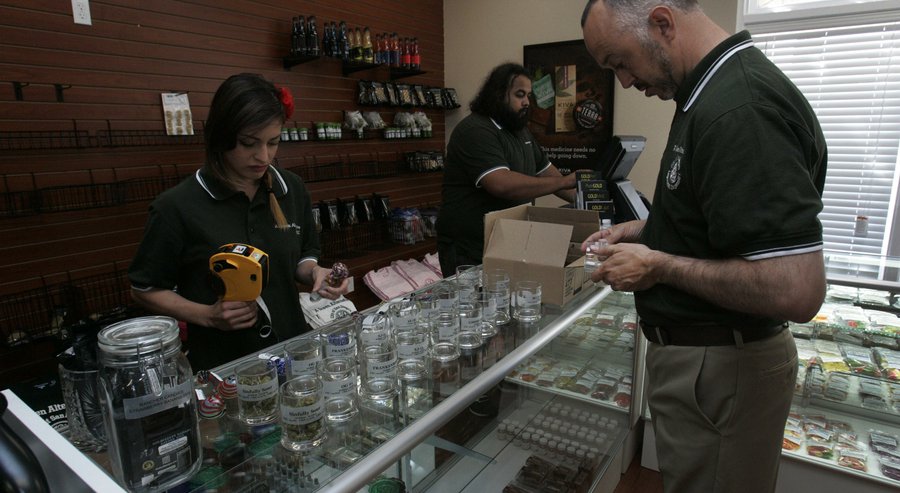